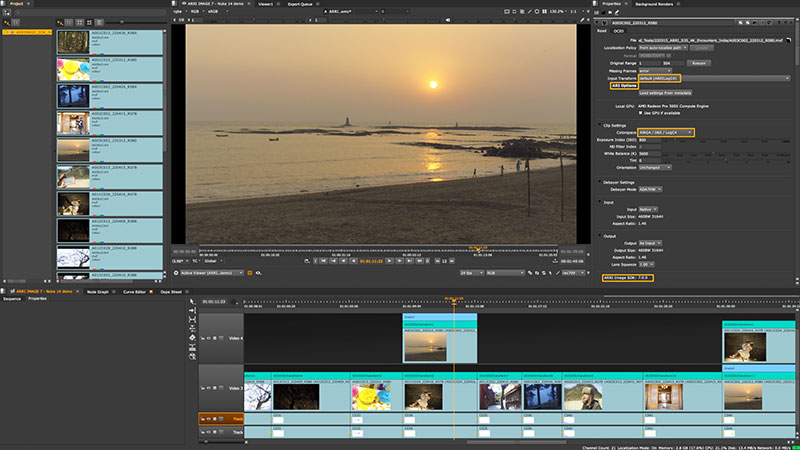 Foundry has developed the first release in the Nuke 14 series with a completely reconstructed, updated 3D system, now in beta, that contains more than 40 nodes and a USD-based architecture. The intention is to improve performance when working with large scenes. Foundry aims to approach USD-native workflows by combining the scalability and performance of USD with the simplicity of its existing compositing workflows. Pipeline developers will also have flexibility to help them create new USD-based integrations.

As well as this major change, Nuke 14.0 also has updates to the UnrealReader, which supports Unreal Custom Render Passes, new cloud-based login licensing, and a free library called Cattery that has been added to Nuke for third-party machine learning models. These models have been converted to .cat files and are ready for users to run as nodes.

A part of the new USD-based 3D system is the introduction of a dedicated scene graph to Nuke that artists can use to view, navigate and manage complex 3D scenes. It will give artists a clear, visual overview of a scene, as well as drag-and-drop functionality to new path masks in nodes. Consistent with other modern 3D workflows, Nuke’s scene graph makes sure that every primitive inside the new system will have a unique ID path that will exist in a scene graph hierarchy. 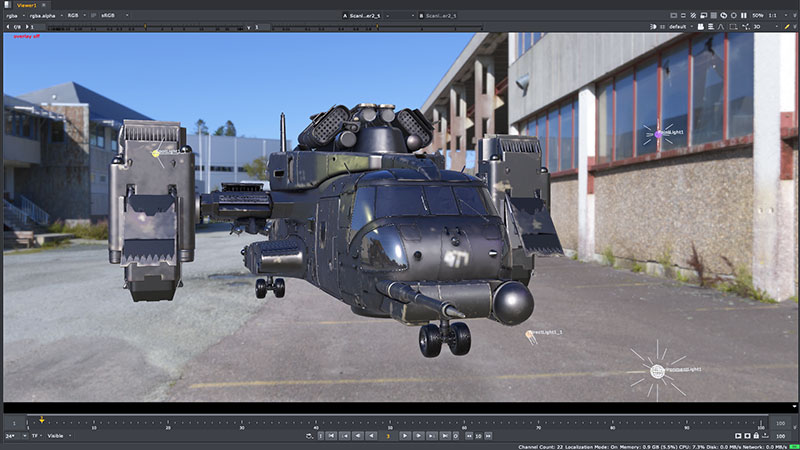 Support for USD lights and materials

Artists also have greater control with new path and mask knobs in the system that integrate into existing workflows. All nodes that create geometry will have a new path knob so that users can determine where the geometry they are creating lives in the scene hierarchy and how it is named. Similarly, any nodes that modify geometry will have a new mask knob that artists can use to specify which part of the 3D scene that node should affect.

These mask knobs are based on a simplified CEL (common expression language) that allows the use of tokens and expressions. For artists, this means that the knobs can default to ordinary workflows needing minimal input, but it also gives them a chance to make complex selections if they want deeper control.

Nuke’s new support for USD material networks, and the new PreviewSurface material node, make it possible to use USD-based specular or metallic workflows. Materials can also display immediately in the viewer, with their own looks, when working with USD files, showing assets in a quick, accurate representation inside Nuke’s 3D viewer. 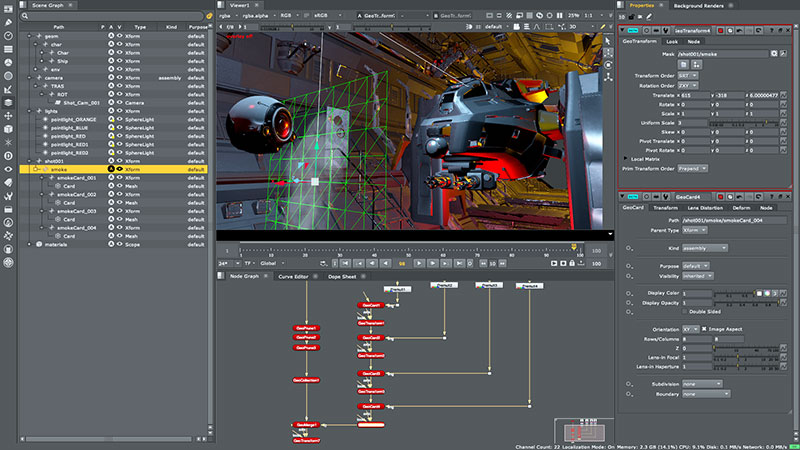 Path and mask knobs in the new 3D system.

The new USD lights mean that when importing lights from other USD-based applications, the exact same lights will be present inside Nuke. When combined with Hydra and potential future support of additional renderers in Nuke’s viewport, having these lights makes it likelier that artists will see a more consistent image across applications going forward.

Because Foundry is releasing the 3D system as a beta feature, a dedicated community forum space is available where artists can collaborate on its development, send feedback and contribute to upcoming 3D compositing workflows. In effect, artists can help continue to shape the new 3D system across the 14 series.

The Nuke team is interested in user input regarding all areas, from existing nodes and workflow improvements to new node or workflow suggestions. They also seek feedback on performance, the API, and new features such as the scene graph or path and masking workflows. Join here.

ML Models in the Cattery

Cattery is a library of free third-party machine learning models converted to .cat files to run natively in Nuke. The aim is to make ML models – in this case, different ML models that all run in Nuke – regular tools accessible to any team or user, not just researchers and specialists. Users will have access to models with up-to-date functionality, addressing segmentation, depth estimation, optical flow, upscaling, denoising and style transfer, with plans to expand the models hosted in the future. 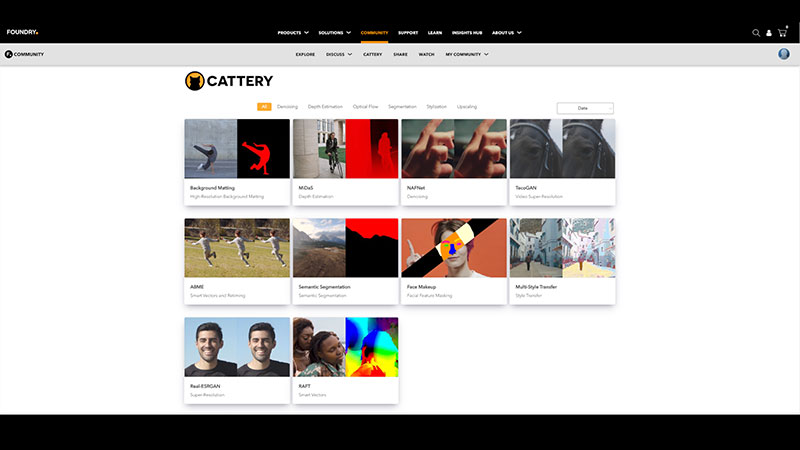 During the Nuke 13 cycle, CopyCat and the Inference node were developed, with the ability to load third-party PyTorch models. As intended, since then, machine learning researchers have also shared their own models on GitHub, however, the ability to run them in Nuke may require engineering skills.

Instead, Cattery has a free library of machine learning models that can run in Nuke now. It will serve as a repository of free additional Nuke plug-ins with each model delivering different functionality. Initially, Foundry will convert a set of models and upload them for access, but over the longer-term, the site will open for user submissions – that is, artists will be able to convert or create their own .cat models and submit them to Cattery.

Nuke 14.0 ships with UI and performance improvements to Nuke’s AIR (artificial intelligence research) tools. These updates include greater speed and accuracy for CopyCat when creating compositing mattes for humans, substantially speeding up training. Upgrades to PyTorch 1.12.1 widen the range of support for models converted to .cat via the CatFileCreator node and also speed up training on NVIDIA Ampere GPUs. 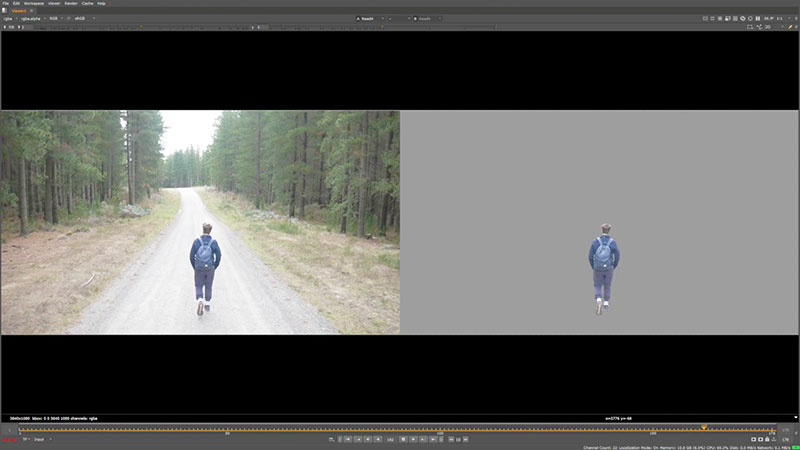 AIR Machine Learning Nodes include CopyCat itself, which trains networks and creates a .cat file for Inference; CatFileCreator that converts TorchScript .pt models into Inference-readable .cat files; and Inference, applying the results from a CopyCat .cat to the input image. Trained nodes include Deblur, which removes motion blur from the input image, and Upscale, upscaling the input image by a factor of two.

Artists can now access full OCIO soft effect support on their own timelines so that projects imported from Studio or Hiero can be opened and all the OCIO soft effects can be accessed and adjusted. New instances of OCIO can be added on new tracks or clips for better control and reviewing in context. 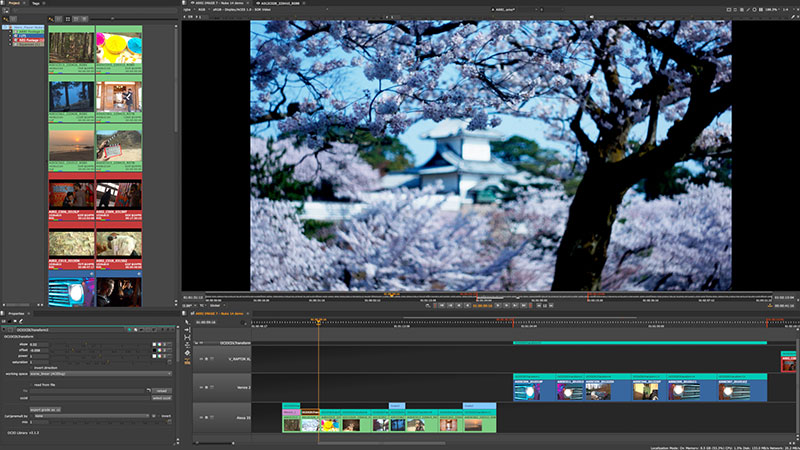 Pipeline developers can continue to investigate the new OTIO (OpenTimelineIO) API and interchange format, now updated to the latest 0.15 version, for moving editorial data throughout the pipeline. OTIO supports clips, timing, tracks, transitions, markers, metadata and so on, but video and audio media are referenced externally.

For artists working with HDR data, colorimetry metadata support now makes it easier and faster to set up monitoring devices. Users can enable and control metadata passed over HDMI or SDI, so that their video content is automatically displayed in HDR on the appropriate monitor. 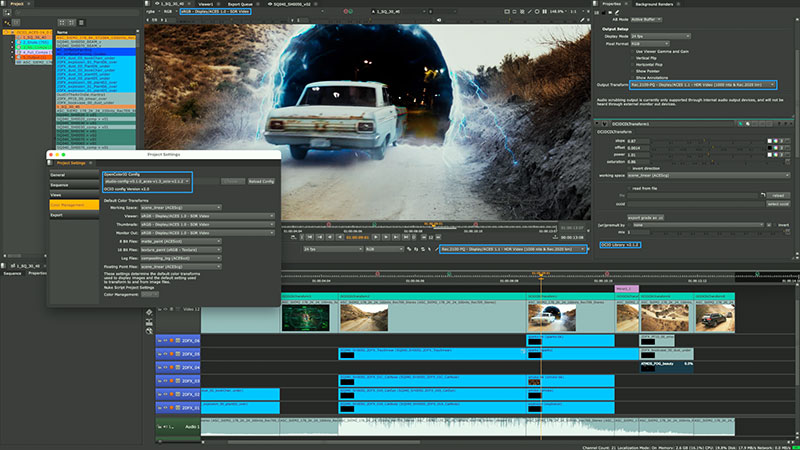 Peregrine Labs' well-known Bokeh tool will be integrated into the Nuke Family from Nuke 14.0v2, coming early 2023. Bokeh is the only commercially available tool for defocus of deep data and is considered essential for artists using deep compositing in Nuke. It can also be used to simulate the attributes of real-world lenses, resulting in creative, cinematic depth of field effects. Initially Bokeh will be integrated into Nuke with its existing functionality, but Foundry plans to further develop the software to improve performance, and add fuctionality.   www.foundry.com