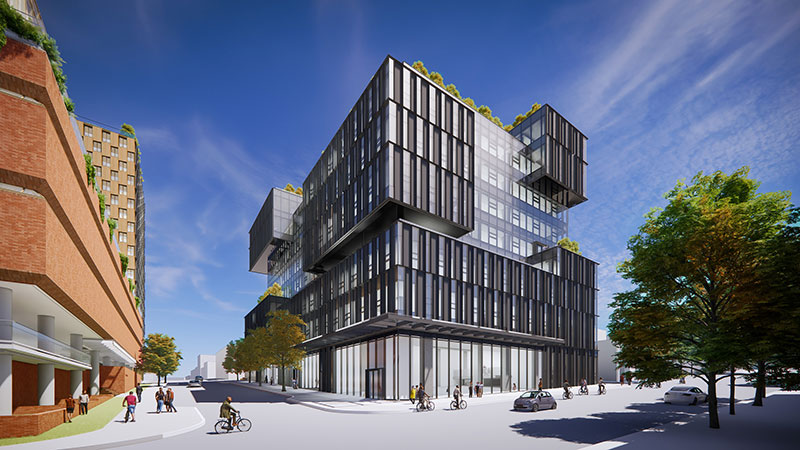 Animal Logic is building a new 110,000 sqft purpose-built studio, which will double their workforce in Vancouver. It will be a part of the Main Alley campus by Westbank, a 730,000 sqft zero carbon development built for the creative economy.

The new studio space will allow Animal Logic to support an additional 300 roles – increasing diversity of talent while providing ongoing opportunities for both recent graduates and established artists. Headquartered in Sydney, Australia, Animal Logic opened a second animation studio in Vancouver, Canada in September 2015 to produce a slate of films with Warner Bros. Pictures, with their first film, The LEGO Movie 2: The Second Part, released in 2019.

Since then, the studio has continued to work on a full slate of projects, employing hundreds of artists and practitioners over the last six years and creating feature animation for projects such as DC League of Super-Pets and Toto with their industry partners.

Designed to demonstrate leadership in sustainable development, Main Alley is targeting to achieve net zero carbon lifecycle and will be connected to two low carbon district energy systems, including a cooling plant operated by Creative Energy and the City's Neighbourhood Energy Utility (NEU).

“It’s exciting to be able to design a space for our hybrid workforce that fosters an interconnected, collaborative, creative environment for our talented employees and their development, while also supporting our sustainability initiatives,” said Animal Logic COO Sharon Taylor. “This expansion further solidifies our commitment to BC, and we are excited to see what the future holds.”

“The Main Alley campus represents many of our core commitments: responding with urgency to climate change and supporting the creative industries and creative economy in Vancouver,” said Emilie Lok, Leasing at Westbank. “We’re looking forward to working together to realise their space at Main Alley.”  animallogic.com