Maxon’s Cinema 4D Subscription Release 24, or S24, has new tools to help users search for and obtain models, materials and other assets, and to place them within the scene in different ways. The release includes workflow upgrades for the new character animation tools added for S23, and an early look at the development of the Scene Nodes and Scene Manager interfaces to the new C4D core.

Cinema 4D S24 has new tools for placing objects within a scene when creating and adding props to an environment. The Place Tool is used for drag and drop placement of an object onto the surface of existing scene elements, with handles to scale and rotate the elements. Objects are automatically placed according to their bounding box or defined axis, with an optional offset. Items may be interactively copied and placed directly from the Asset Browser. 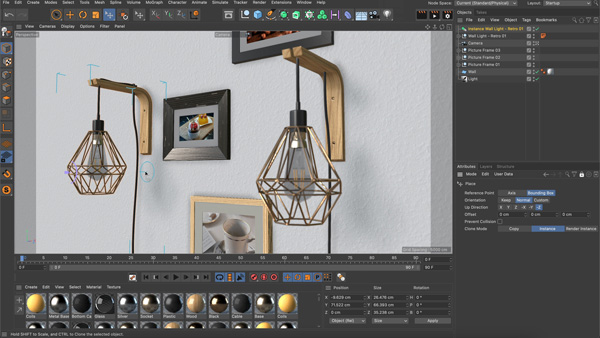 With the Scatter Pen, you can scatter a single object or a selection of objects onto surfaces by dragging them within the view, controlling the spacing, alignment and frequency, and then painingt them in random or defined distributions. You can also vary the position, rotation and scale once they are placed. Clean up and tweaking objects individually is done with the Place Tool.

Alternatively, Cinema 4D’s physics simulation can be applied with the Dynamic Placement tool. Using dynamics to create realistic collisions between objects, the objects will clump together or drop naturally onto surfaces. For speed and accuracy, simplified proxy geometry is generated automatically. 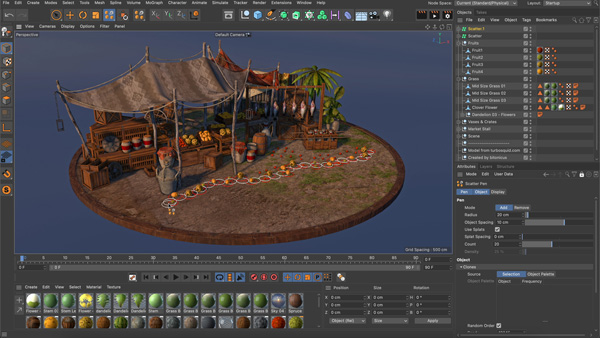 To browse and search online or local asset databases, S24 has a new Asset Browser for finding models, materials and node capsules to use in 3D scenes. C4D subscribers have access to a large library of assets, organised with rich metadata and keywords, that can be downloaded and cached locally on demand.

Cached assets will be made immediately available for re-use on the local computer. Keywords can be added to the assets, making content more searchable. By saving frequent searches in smart folders, when you add assets later with the same keywords, they will be added automatically to the appropriate folders. 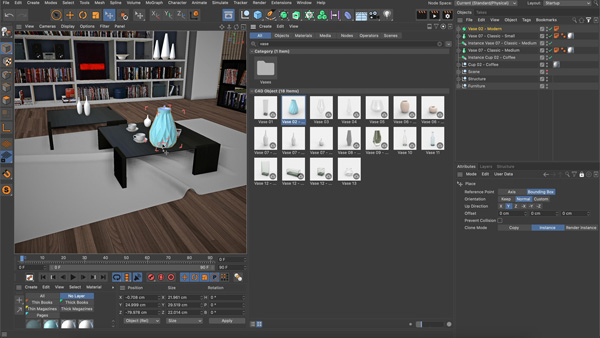 C4D’s Asset Versioning functionality is useful in complex production pipelines. As the project evolves the asset can evolve with it – users can either roll back to a previous version or update a scene with the latest version very quickly. To make workflows more flexible and efficient, object-based assets can be inserted as objects, Instances or References. Users can also create their own libraries and add assets by dragging them directly into asset folders.

Workflow enhancements have been made to the character animation features introduced in R23. For example, R23’s Character Object was developed to accelerate character rigging. Users add rig components and controllers, and adjust the joints to the right position. Once the set-up and placement are correct, users bind the rig to the character and start animating. Initial weighting is applied automatically.

In R24, a Car Rig Character Object Preset (see top image) is now available to animate objects with four wheels along a spline. The wheels roll properly, and the chassis drifts or tilts automatically based on the motion path and ground plane. The rig is useful to help populate scenes with realistic traffic, or stage car chases. 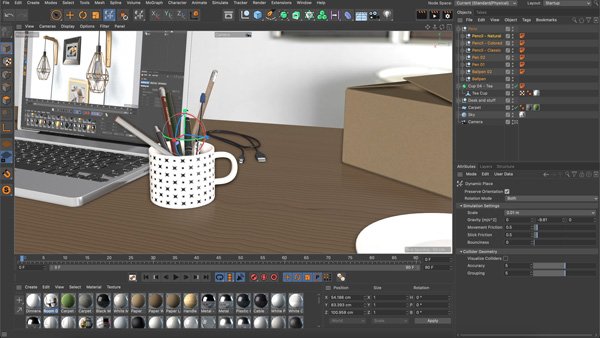 As well the Character Object, S23 added many animation tools to Cinema 4D such as walk cycles, character animation states for morphing, deformation tools and a pose library. For retargeting, a Character Solver workflow allows you to define character for commonly-used rigs and retarget animation to suit any new joint orientation. To upgrade these tools, S24 now includes improved curve evaluation and more effective retargeting and pose workflows.

Cinema 4D S24 gives users a look at the new Scene Manager core, currently under development to replace Cinema 4D's Classic Object Manager. Node-based assets are used to construct procedural geometry or entire scenes in the new hierarchy-based view, or the same objects can be viewed in the evolving Scene Nodes editor. 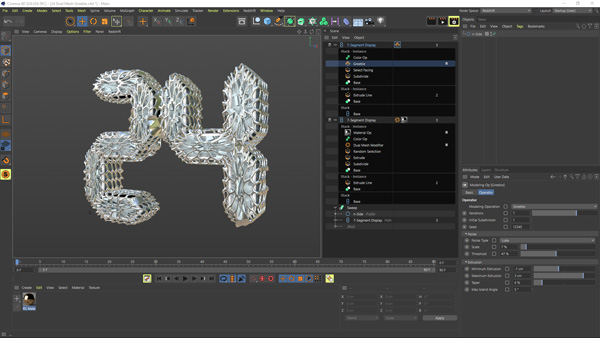 The Scene Manager will eventually have a workflow similar to Cinema 4D’s Classic Object Manager. To integrate Classic C4D objects, drag them into the Scene Manager. Everything done inside the Scene Manager creates a corresponding node graph within the Scene Nodes editor, giving a choice of workflows depending on user preference or on the job at hand.

From the Scene Nodes you can manage relationships and dependencies between objects, construct and modify geometry, and build reusable assets. More important, TD users can expand the system of Distributions, Nodes and Capsules without resorting to code, giving teams more possibilities. These tools and others like them are being developed as Scene Nodes continues to mature. 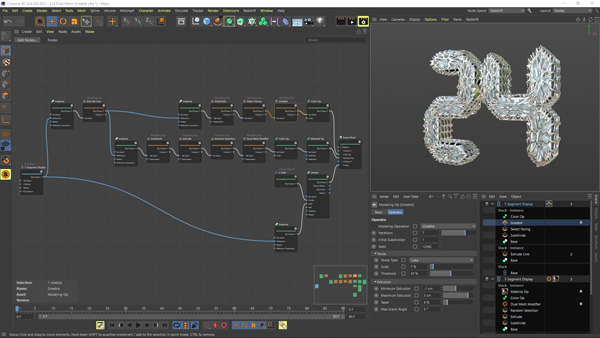 Maxon has made Redshift for macOS available as well, including support for M1-powered Macs and Apple’s Metal Graphics API. Redshift’s features include ray switches, flexible shading networks, motion blur, AOVs, deep output, layered EXR and others. Setting it apart from other GPU renderers, Redshift is a biased renderer that enables artists to adjust the quality of individual techniques, of interest when aiming for a specific result for a job, in order to achieve the best balance between performance and quality for production.

As a Universal renderer, Redshift is optimised for high performance across M1- and Intel-powered Macs.  Universal rendering refers to sending the fully rendered application in the initial payload to the browser and loading the application code afterward. That process shortens the time users have to wait before they start to see results on screen.

Redshift’s new native support for M1-powered Macs is expected to substantially improve workflow efficiency, since the integrated graphics in M1 were developed to increase graphics performance combined with low power consumption. Redshift for Intel-based Macs will be available before the end of May 2021, and support for M1-based Macs will be made available with the release of macOS Big Sur (11.3).

Cinema 4D S24 is immediately available for subscription customers. For perpetual license holders of Cinema 4D a release is scheduled later this year that will incorporate the features of S24, as well as future updates.

Maxon is showing the new features in Cinema 4D S24 during a three-day virtual event – The 3D and Motion Design Show. Tune in online at 3dmotionshow.com from 13 to 15 April for artist presentations.       www.maxon.net