Foundry has launched into the Nuke 13.0 series of releases with a flexible set of machine learning tools, a new Hydra 3D viewport renderer and extended monitor out functionality, better workflows for collaborative review and Python 3 support.

Within the artificial intelligence research (AIR) menu is a new suite of plugins. The main node is the CopyCat node, which replicates customer effects by learning from a set of training images. The user feeds the node pairs of before/after images and the node will learn how to copy the transformation to progress from one to the other. 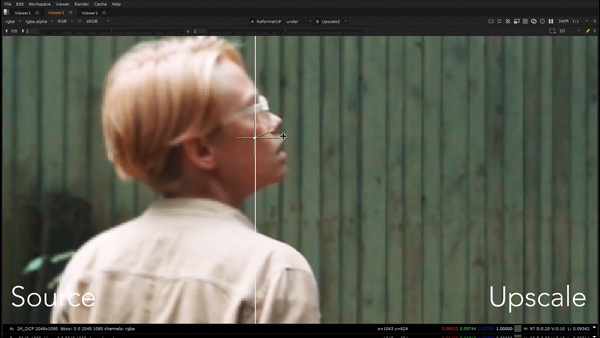 Once the training is complete, the Create Inference knob will automatically create an inference node that applies the result of the training to the supplied input image. Effects trained using CopyCat can be shared with multiple artists, who load the effect using the inference node and apply the effect to individual shots. If it's not right for a given situation, you can continue training that data set with the new image data of their shot.

Two pre-trained tools are included in Nuke 13.0. The upscale node upscales footage by a factor of two, similar to Nuke's TBI scale node but with more refined results, especially when working with fine detail. The Deblur node removes motion blur from the input and is a good match for working with stabilised footage. Its mask input helps isolate the effect to a specific area.

Nuke 13.0 includes Foundry’s initial support for USD Hydra into Nuke. It upgrades Nuke's 3D Viewport to use hdStorm, one of the delegtes in the USD system of render delegates that serve as bridges between the Hydra viewport and a renderer. Nuke's viewport can now more accurately render a representation of the 3D scene from the ScanlineRender node. Users can also switch back to Nuke's old viewer, compare and choose between them. 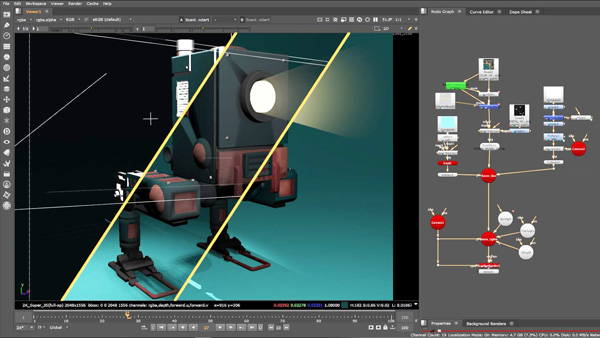 The new Hydra viewer should support most of the familiar workflows for moving geometry around a scene, and particle systems and projection setups should display correctly. The main benefit of the Hydra viewport is Nuke’s ability to display lights, shadows, materials and textures, including moving shadows and animated textures, more accurately. It supports artistic decision making while working in the 3D viewport without switching back to the ScanlineRender’s 2D outputs.

At this stage the Hydra display is still not an entirely accurate representation of the output from the Scanline render, but it is much closer than has been achieved in Nuke before, and gives consistency with other applications using Hydra.

Nuke 13.0 users can load Camera, Light and Axis data from a USD file using native 3D Nodes, and carry USD data directly into Nuke without converting it to a different format. The newly supported data types will be separated out into the relevant Nuke 3D nodes. USD data can also be read directly within each of the updated nodes. For example, users can either automatically populate the camera node with all the cameras contained within the USD file and then toggle between them with the new scenegraph UI, or automatically populate the cameras into separate nodes. 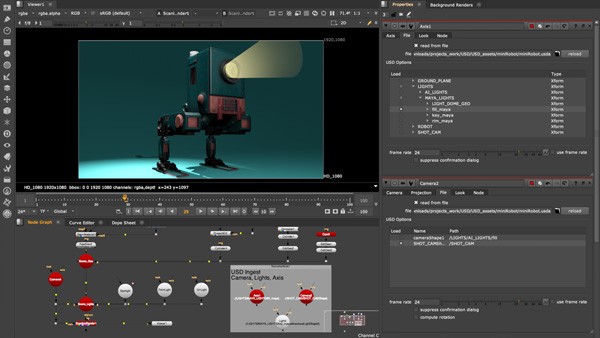 Similar workflows for the light node bring point, spot and directional lights exported from other content creation tools into Nuke. The Axis node reads in a USD file and uses any primitives contained inside to generate position data for the Axis Node knobs, which is useful when matching a camera or geometry to another point in a scene. These extensions are being transferred to open-source so that pipelines can further extend and customise the nodes for their specific USD setup. Note that the USD version supported in Nuke has been upgraded to version 20.08.

The Monitor Out system in Nuke and Nuke Studio is extended across the Nuke software with a more stable, consistent experience – plus independent output transform controls and support for Nuke Studio’s floating window. With this window, a new Monitor Out properties panel allows Nuke users to view images on a second display, without the need of a Monitor Out card. 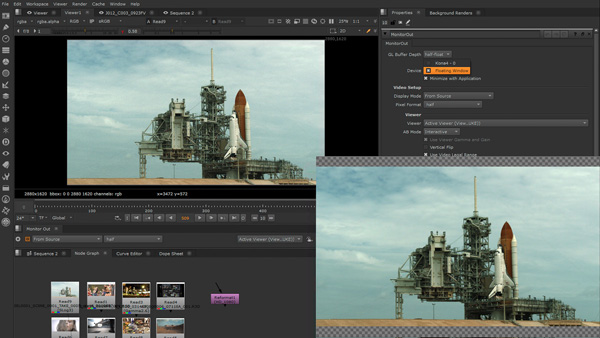 The new Output Transform Control allows independent colour settings to be applied to improve viewing accuracy regardless of the monitor the software is connected to. As a first step with HDR workflows, a beta feature now adds the ability to display HDR images on XDR- and EDR-enabled monitors on macOS.

A new Input Process knob will change the resolution of the output sent to your Monitor Out window, which helps when working at larger resolutions and monitoring to a lower resolution device. New Flip controls allow you to view images in new contexts and adjust the gamma and gain of the viewer, and toggle the display on your second monitor. This gives users more control during reviews.

In Nuke Studio, you can also switch directly between the Timeline and Node Graph with no disruption to Monitor Out output. The new Interactive mode allows greater control over how image buffers are displayed on the second screen, supporting side-by-side display of buffers. Customisable safe zone guides can also be overlaid. 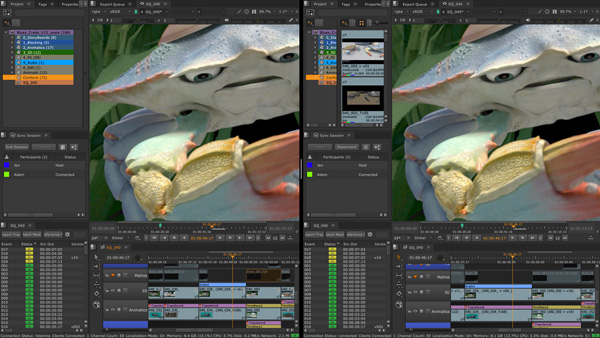 The extended Sync Review improves collaboration by allowing dispersed teams to review together or remotely. Sync Review can be used for client reviews or daily sessions, whole sequences or selected playlists, and helps make sure everyone is working towards the same goal. Teams can connect an unlimited number of Nuke Studio, Hiero or HieroPlayer sessions to a single sync session, so that teams can see projects in context, and sync all the relevant reviewing actions from playback and annotations to editorial changes. Teams can use any of the comparison modes such as side-by-side or wipe, and also make soft changes. All selected clips will update automatically to new versions.

Cryptomatte is now introduced natively to Nuke with a readjusted UI and Python 3 support, and has been moved into the Keyer section of the menu. Cryptomatte is developed by Psyop to create ID mattes, or image masks, automatically with support for motion blur, transparency and depth of field based on data available at render time. Because it ships with Nuke, downloading the 3rd party gizmo is not necessary. 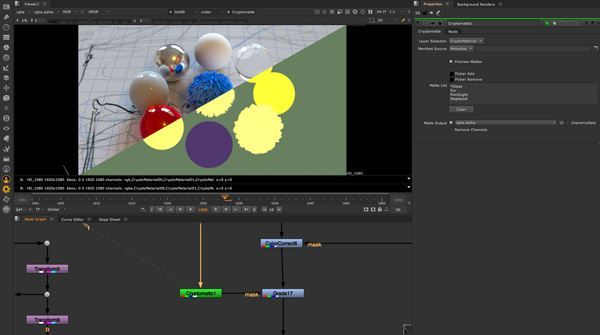 This version of Cryptomatte has basic backwards compatibility, a new icon and a vertical matte list to make viewing selected mattes easier. In the new manifest source, users indicate whether the Cryptomatte manifest is embedded in the input image as metadata, or if it is contained in a separate sidecar manifest file. The wildcard functionality added to the matte list means you can make complex selections using an asterisk symbol.

HieroPlayer now has the same annotations capabilities as in Nuke Studio and Hiero. You can add annotations in the sequence or to each version to keep track of the changes, and to versions with different changes applied. 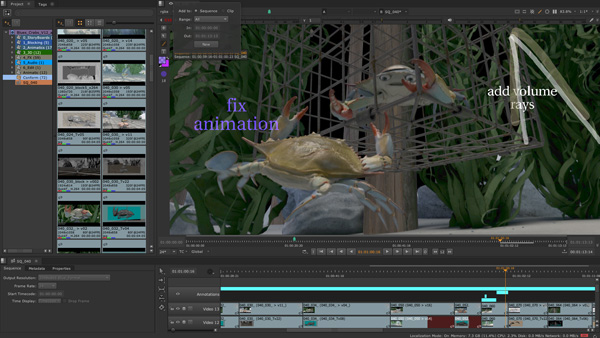 Consequently, artists can interact on HieroPlayer sync sessions with access to all annotations and collaborate in real-time. Sync sessions are now fully interactive between Hiero, Nuke Studio and HieroPlayer. A user can import and create timelines, manually or from your assets manager, creating a playlist for review or last-minute additions to daily reviews.

Nuke 13.0 includes support for the VFX Reference Platform 2020, and a major upgrade to its Python API, updating to Python 3.7.7. As of Nuke 13.0, Python 2 support will no longer be available and Python scripts and integrations will need to be updated. Alongside this Python update, Nuke’s other 3rd party libraries have also been upgraded.   www.foundry.com