At the end of January, Digital Domain released a VFX reel highlighting their work on ‘Lost in Space’ season 2, specifically on the first episode. As it covers a large amount of wide-ranging work, getting in touch with their VFX Supervisor on the show, Aladino Debert, seemed like the best way to understand what was happening behind the scenes of the reel. Fortunately, just a few questions pulled out lots of interesting details.

The reel opens with scenes of the family’s spaceship, the Jupiter 2, floundering under a heavy storm at night along a rough stretch of coastline. Rain pelts down as the characters struggle to gain control of their ship before it smashes into the coastal rocks.

“Like most elements-heavy sequences, the set was quite intricate owing to the practical water effects we needed to capture in camera,” Aladino said. “It was constructed in a sound stage in Vancouver with enormous water and wind effects machines to create a violent rainstorm. The practical build included a section of the top hull of the Jupiter 2, along with winches, ropes and jury-rigged steering controls.

“The set also included the lower section of the masts and practical sails at the bottom, although only in their furled state. We decided not to built it over a gimbal, however, both for practical and safety reasons, given that the actors needed to be active on a structure with no edges or safety rails.

“We had green screen sections around the set, but due to the amount of water spray and splashes, the shots ended up requiring a lot of rotoscoping and paint work. But, since we’ve had experience with this type of work in the past, we could handle it pretty easily and the advantages of shooting this way instead of ‘in the dry’ were just too great. The actors also needed to do a lot of sliding to show the violence of the storm as they were tossed around, so the practical effects were essential.

The team knew that at certain moments on various shots, the practical ship would have to be replaced, but they weren’t sure exactly how the replacements would work out each time. “We had every combination you can think of. If we could get away with using the practical pieces, we always preferred doing that, especially with the water splashing everywhere,” said Aladino.

“A good example were shots with the Jupiter crew furling the sails and being tossed about over the hull. But in the end, we had shots in which we added CG extensions to the practical set, shots that were entirely CGI – even if they were not planned that way – and shots in which we would ‘lift’ the actors from the set and replace everything else. It really was determined shot by shot and, of course, by the ocean environment.”

Washing Up to Scale

Digital Domain’s large experience in working on water sequences comes most recently from shows like ‘Black Sails’ and ‘Outlander’. Aladino remarked that what makes water such a tricky element to simulate realistically is its ‘scale problem’.

“It does not scale well,” he said. “If you take a gallon of water, splash it into a tub and shoot it in slow motion, the old fashioned way, it simply doesn’t look the same way as 5,000 gallons falling into a pool. We had to pay close attention to the water’s behaviour in wide shots to make sure that viewers familiar with, for instance, reality programming like ‘Deadliest Catch’ shot entirely out on the open sea, didn’t instantly think our work looked fake.”

But trickier still, and perhaps most important from the audience’s point of view, was the boundary between ship and water. Here, the viewer has a scale reference, in this case a ship with people on it. Aladino’s team had to spend a lot of time on R&D to make sure the shots didn’t end up looking like a toy boat – or rather, a spaceship – in a tub.

“We also had the secondary FX to create, such as the ocean interacting with rocks and the rain splashing on everything from the hull and sails to the digital doubles of the cast. It was a time-consuming process, but we knew what we were getting into. We used Maya for animation and Houdini for all the fluid effect simulations, as well as the rendering of the entire shots. No practical water elements were used besides what was present on the live-action plates and perhaps the odd small splash here and there.”

As mentioned, digital doubles were also needed on occasion. “We originally received digital double assets of all members of the Robinson family created for season one, because we knew that we’d need them on the wide, full-CG shots. We ingested them into our pipeline, rigged them and so on although, in general, the idea was to use plate photography of the actors on set as much as possible, simply because it’s a more cost effective approach.

“But in the end, our assets looked realistic enough to open up other opportunities to use them. For example, in a shot that was originally conceived as a plate shot with ocean effects only in the background, the performance of the actors didn’t quite work with scene. Having the doubles meant we could create the entire shot in CG, and include close ups of the characters performing very specific actions.” 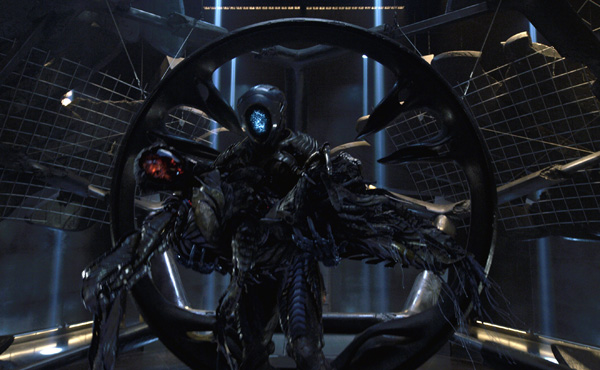 The robots are another major part of the story, and Aladino said the team was excited to have the opportunity to work on some of the robot sequences. Their work consisted mostly of shots that included Will’s friendly robot and the one called Scarecrow who had been heavily damaged. “That damage manifests itself in the way he is physically broken and, more important, in the way he moves. Since the robots are mostly made out of metal, animating the parts so that they wouldn’t intersect or stretch in a manner not consistent with the design was a good challenge.”

Scarecrow needed a full digital replacement, leaving the team with the puzzle of his performance to solve. “The fun came in giving an alien robot recognisable emotion with only a glass face to work with. We acted out a lot of his performance ourselves, and shot it on our phones to guide the team far as possible. We also created a full CG version of the friendly robot. Although the sequences are mainly shot with a stunt actor in a suit, at times the shots required certain sections of the robotic character to be replaced with our CG model.”   www.digitaldomain.com