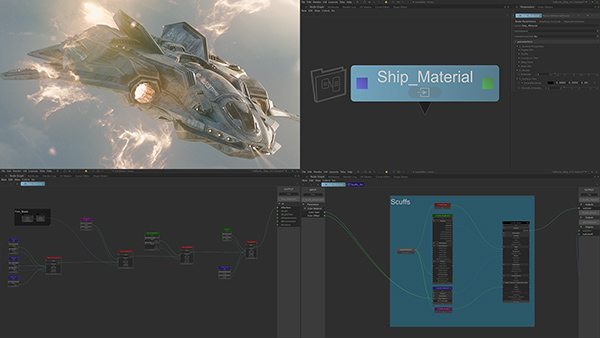 Foundry Katana’s new version 3.2 has an updated user interface for the material node graph with faster workflows. The 3Delight NSI rendering plugin can now render from multiple cameras at the same time, and its render times and memory requirements are lower. Katana has been upgraded to USD 19.05, introducing the ability to use the Hydra render delegate system.

Katana is Foundry’s lighting and look development software that helps manage lighting data, using a node-based lighting workflow. Also used to create shader networks, it serves as a lighting and lookdev pipeline tool, producing assets that can be published so that artists of different types can work in parallel. 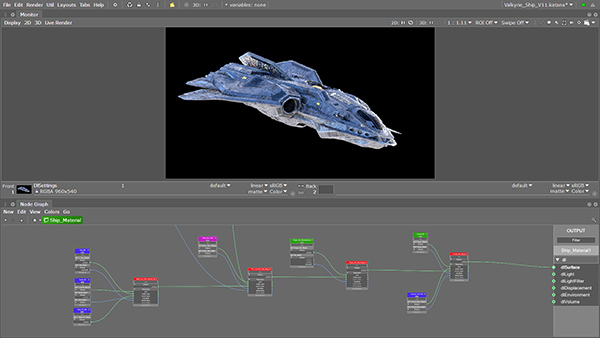 The hero image of the Spaceship (from CGTrader) in the UI above was textured with Mari, look development in Katana, rendered with 3Delight and finished in Nuke by Terry Riyasat.

The material node graph system inside the Network Material Create Node has been rewritten with efficient organisation tools for teams of artists. Shading nodes are now designed with a fully exposed, left-to-right workflow so that all viable connections and details are easier to see, with all possible outputs accessible. Different views are available that allow users to expand or decrease the level of detail displayed at any one time.

New Shading Group nodes support neat organisation of complex networks - once a series of shading nodes is put together, in effect the Shading Group becomes its own self-contained software component, which can be connected and applied to multiple nodes. 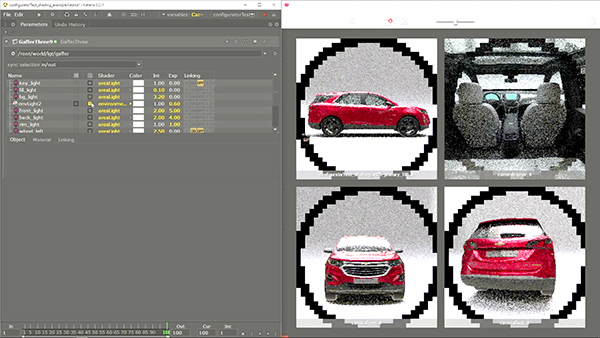 Katana and 3Delight can render multiple cameras at once to allow modifications to layout, materials or lighting to be viewed from multiple points of view. 3Delight also shares the processing of shared scene data of the multiple views.

When using the 3Delight NSI plugin with 1.5 series updates, artists will be able to render from multiple cameras at the same time, giving them more autonomy by making it easier and quicker to judge the best choices when developing the look of an environment. 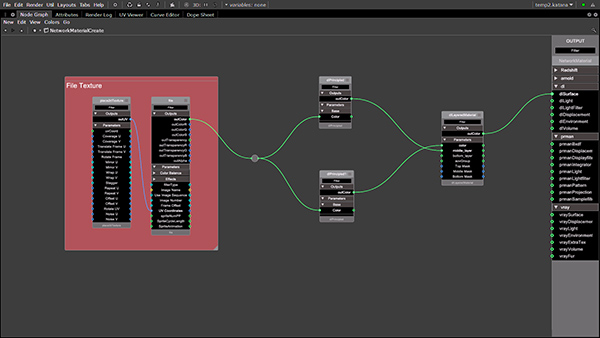 This is the inside of the new NetworkMaterialCreate node. Nodes use a full left to right workflow with collapsible nodes.  Backdrops, dot nodes, and node coloring allow for structured organization of complex networks.

Subsurface scattering (SSS) has been improved in order to use the recent Random Walk method. Physical SSS rendering is computationally expensive - the rendering engine has to achieve physically-correct light photons, ray tracing and global illumination to simulate the absorption versus scattering effect. Random Walk is a type of brute force volume scattering within the mesh, with part of the SSS code tuned for better performance.

Unlike true volume scattering, the boundaries are assumed to be diffuse and all lighting is assumed to come through the boundaries from outside the volume. This gives more accurate results for thin and low density features in particular. 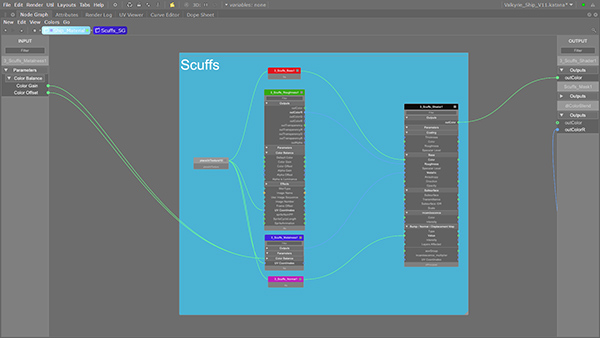 This is the inside of a Shading Group which is part of the new network material UI. Custom node networks can be created and user chosen node connections can be promoted by dragging input and output connections to the left and right sides.

Hair and fur shader results are better looking in Katana 3.2. The 3Delight rendering plug-in is now multithreaded by default, with scene export times shortened substantially, and instance and VDB Volume rendering memory demands limited by as much as eight times, according to Foundry.

Ivaylo Petrov, Lighting Artist, Worldwide FX said, “Using Katana, some of our artists were averaging 20 shots per day. The actual record is 45 shots, from which almost 40 went to final. This is one of the ways Worldwide FX can output a lot more work than you would expect when you hear that we are just five people.” 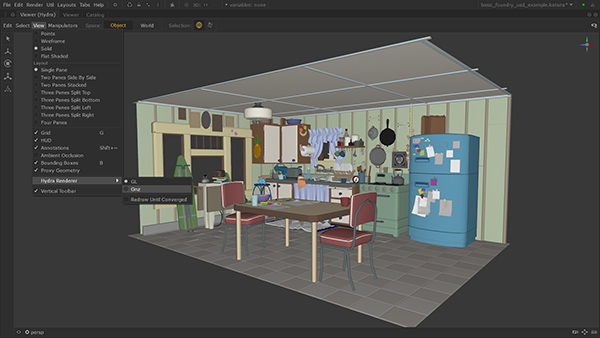 Above is the Katana Hydra Viewport with the USD Kitchen test asset loaded via the forthcoming Katana USD nodes. The Viewer is now powered by USD 19.05 and allows the use of render delegates. The hdGnz delegate is shown here.

In line with their ongoing use of USD (Pixar Universal Scene Description), which serves as the data-backbone for studios and transfers data between departments for artists collaboration, Foundry has upgraded the Hydra-powered viewport to USD 19.05. This Viewport version introduces the ability to use the Hydra render delegate system. The Delegates act as bridges between the Hydra viewport and a renderer. The system gives the ability to switch out the backend renderer for the viewport data in Hydra.    www.foundry.com