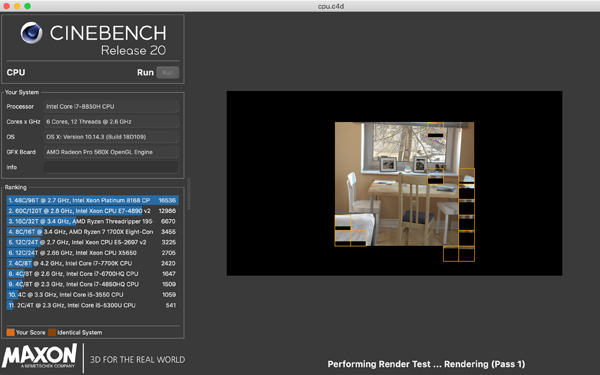 MAXON CINEBENCH is computer testing software used to benchmark hardware capabilities of computers using the 3D engine from Cinema 4D Release 20. Available free of charge, CINEBENCH compares CPU performance across Windows and OS X systems and platforms. It generates a photorealistic 3D test scene on a computer that uses all of the system's processing power to render, making use of algorithms that stress the available processor cores.

CINEBENCH R20 uses a larger and more complex test scene than the previous release R15 used, needing about eight times the computational power to render. The test also requires about four times as much memory.

The software in both CINEBENCH R20 and Cinema 4D R20 integrates new rendering architectures, including Intel’s Embree raytracing system and functionality from modern CPUs made by AMD and Intel, that render the same scene on the same hardware twice as fast as previously.

Maxon says CINEBENCH R20 results in more accurate benchmarks for current and upcoming CPUs when testing for stability on a high CPU load, testing if the cooling solution of a desktop or notebook is sufficient for extended tasks to deliver the full potential of the CPU, and testing if a machine is able to handle demanding 3D tasks required for real projects.

CINEBENCH Release 20 is available from the MAXON website or the Microsoft and Apple app stores. The application runs on Windows 7 SP1 64-bit or higher on Intel or AMD 64-bit CPU with SSE3 support or MacOS 10.11.6 or higher with 64-bit CPU running on Intel-based Apple Macintosh and 4 GB RAM.   www.maxon.net