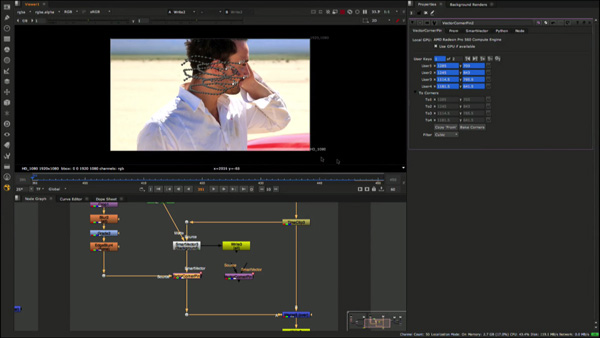 The Nuke 11.3 release updates the user experience and increases performance of all Nuke software. It has launched with major changes to the LiveGroups tool supporting collaboration, and multiple-file stereo workflows and file handling in Nuke Studio and Hiero. The release optimises the particle system in NukeX that generates particle simulations with greater performance to allow faster iteration, and adds a new Smart Vector workflow for warping images. It also includes pipeline updates for new ARRI and Sony SDKs, and AMD eGPUs.

LiveGroups, a type of container node, is used together with LiveInput nodes so that several artists can work on different parts of the same shot as separate scripts, without having to render in between. LiveGroups also combines the functionality of Nuke's Precomps, Groups and Gizmos, and makes available what each one lacks individually through the LiveGroups node.

To this, Nuke 11.3 introduces new functionality that supports collaboration and increases artist control, integrated through a set of corresponding Python callbacks and UI notifications. That is, user scripts can exchange messages, while the group continues working. These updates make Live Groups easier for larger pipelines to integrate. 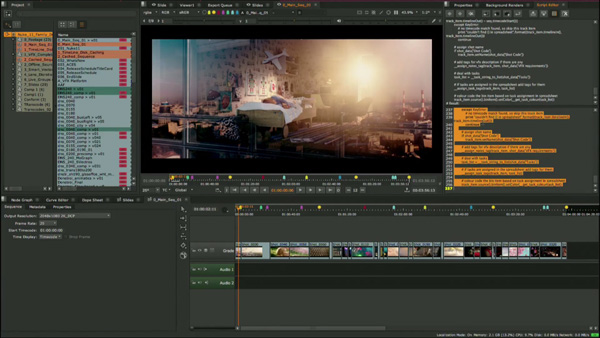 For instance, new locking functionality introduces an editable and non-editable state in place of the previous workflow, giving more visibility and subtle control when changes are made. Artists also have more flexibility when using user knobs to override values within a Live Group. User knobs are modifiable node controls that appear in the node's panel. Users give knobs their specific types, as required - animated, with expressions, disabled or hidden and so on.

The particle system in NukeX has been optimised to generate particle simulations several times faster than previous versions of the software, and also much faster for playback in the viewer, allowing faster iteration when setting up particle systems.

In Foundry's own tests, improvements were seen at various scales, with more improvement in simulations with a higher number of particles. Custom particle plug-in developers will still be able to compile their existing code, and can also take advantage of new APIs to achieve similar performance gains.

The new Timeline Multiview support extends stereo and VR workflows. Artists can now use the same multiple-file stereo workflows established in Nuke, on the Nuke Studio, Hiero and HieroPlayer timeline. The updated export structure can also be used to create multiple-view Nuke scripts from the timeline in Nuke Studio and Hiero.

Included are support for the %V token (representing left and right images) on import, an automatic detect views option, plus some new project settings and preferences. Split views to tracks is a new tool that automatically copies and adds soft effects to the appropriate tracks. Full resolution stereo is also supported on your computer's Monitor Out feed that helps make review sessions easier to interpret, and a new export preset is added to help render stereo projects. 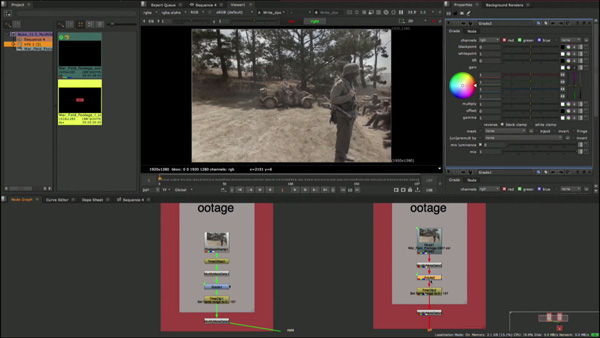 Timeline Multiview for stereo and VR

The result is more control to constrain elements in a specific location, while still using Smart Vectors to drive the fundamental distortion of an element. Also, using the VectorCornerPin is usually simpler than creating multiple VectorDistort nodes with different reference frames and mix between them.

New UI indicators in Nuke for changes in bounding box size and channel count, which can become performance bottlenecks, are added to help artists troubleshoot their scripts. A visual indication identifies nodes that increase bounding box size to be greater than the image - glancing at the node graph will reveal the state of the bounding box. 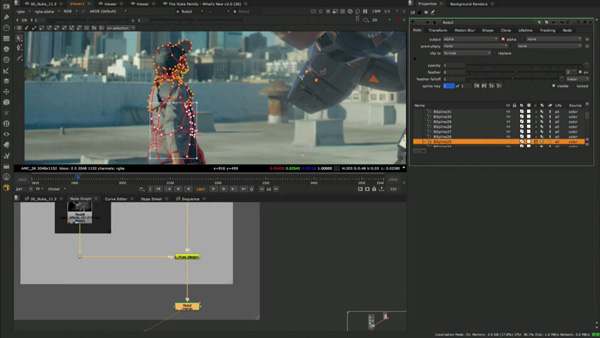 Channel count is now displayed in the status bar when reading in EXRs, and a warning will be triggered when the 1,024 channel limit is exceeded. The appearance and threshold for triggering the bounding box and channel warnings can be set in the preferences.

The selection tool has been improved in both 3D and 2D views, including new modes. Users can now select areas of a certain shape with the marquee tools or use the lasso tool to make a selection by tracing the edges of any shape. New hotkeys allow users to draw a rectangular or ellipse selection from the centre, and constrain it to a square or circle.

To keep pipelines current, upgrades have been made to support the most recent versions of commonly used cameras and eGPUs. The ARRI SDK has been upgraded to version 6, and the Sony RAW SDK has been upgraded from version 2.4 to 3.1. Footage from the Sony VENICE camera, and X-OCN encoded footage from the F5, F55 and VENICE, are now supported. Support has been added for AMD cards in eGPU set-ups for Mac OS 10.13.5 and later. The BlackMagic eGPU and Sonnet eGFX Breakaway box have both been tested to work with Nuke 11.3 as well.   www.foundry.com