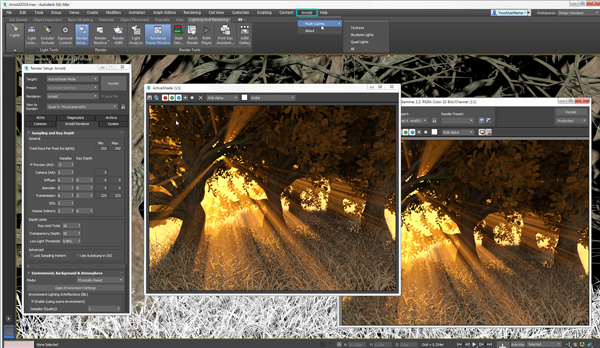 As well as launching the Flame 2018 Update 1 recently [see the news here], Autodesk has made significant changes to its main 3D software packages including Maya, 3ds Max and Solid Angle's Arnold renderer. Because Autodesk is no longer releasing a single, annual set of updates for each application, finding a description of the updates can be a little challenging. Some of them are outlined here.

Overall, interactivity has been a focus across the software, as well as improving workflows as much as the individual tools.

Maya 2017 update 3 enhances the character creation tools with additions such as interactive grooming with XGen, a new UV workflow and updates to the motion graphics functions that include a live link with Adobe After Effects.

The interactive grooming workflow for hair and fur in Maya 2017 now has a clump modifier, twist brush, object collision and a cut modifier. Because the grooming descriptions and modifiers are Maya-based nodes, they can be manipulated in the Node Editor. The nodes compute on the GPU, so that brush stokes appear in real-time, resulting in enough interactivity to avoid generating previews. All of the interactive groom hair data can be saved either to Maya scene files or to Alembic-based cache files. 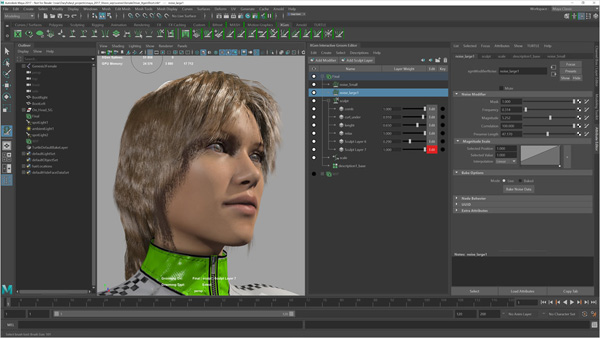 In the UV Editor you can view and interactively edit the UV texture coordinates for polygon, NURBS and subdivision surfaces within a 2D view. The UV topology for a surface can be selected, moved, scaled and generally modified in a way similar to working with other modelling tools in Maya. You can also view the image associated with the assigned texture map as a backdrop within the UV Editor and modify the UV layout to match it.

Users may also compare a 3D object to its 2D texture coordinates by using the UV Editing Workspace. This workspace displays the perspective view and the UV Editor simultaneously, revealing how UVs in the 3D scene view relate to those in the UV Editor's 2D view. Some functions are available outside the editor through the modelling UV menu as well.

A new extrude node in Maya’s Motion Graphics now adds multi-threaded, spike-free extrusion for type and vector graphics, SVG. You also have a new text Generator to create procedural text. It changes the text on each frame using either the options or a Python script. 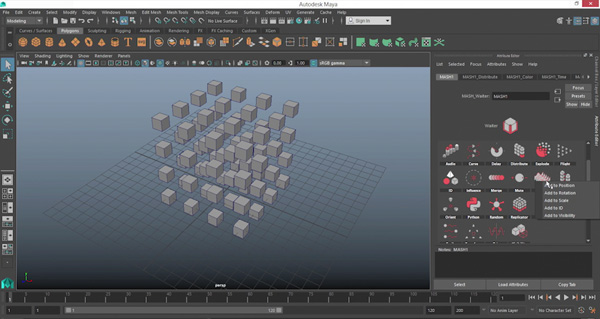 Maya now has a huge number of new or enhanced motion graphics nodes in MASH. For example, a new World node allows you to arrange objects in natural clusters around objects. This is useful for creating imagery such as flowers around trees or rock arrangements. A new MASH Placer Tool can be used to place points in a scene quickly by dragging your cursor over a surface, which is useful for set dressing.

Changes to Curve Warp functionality make it possible to loop closed curves so that an object will keep deforming around it. The Offset value is now independent from the deformer's scale length – that is, an offset from 0 to 1 always represents one complete revolution of the curve.

The new live link between Maya and After Effects allows you to view a scene in both applications simultaneously, as well as perform changes in Maya and see them update in After Effects in real time. 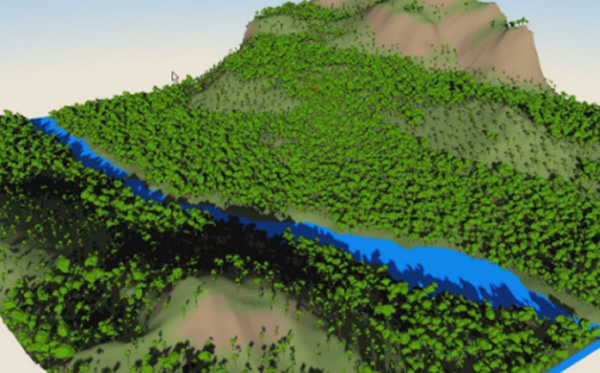 One of the most important updates to 3ds Max 2018 is rendering through a new MAXtoA 1.0 plug-in, which gives direct access to the new functionality in Arnold v5.0, described below. 3ds Max 2018 ships with Arnold 5, replacing mental ray.Other changes to Max are customizable workspaces, smart asset creation tools, Bézier motion path animation. Also, a new Max to LMV (large model viewer) translation cloud service adds the ability to view Max files with Forge Viewer in a web browser, making it easier to review and share assets.

The addition of smart asset packaging to 3ds Max means you can create, share and update portable assets that are flexible, connected and react to changes in design data. In previous versions of the Max Creation Graph (MCG), the installation of a .mcg package was performed as a file extraction into a common loading path, which often resulted in tools becoming invalid due to compound collisions. In MCG 2018, package installation has been improved so that it does not add duplicate compounds to the authoring workspace, or invalidate your tools. Packages are now copied into the user directory and may be read as self-contained files entities. 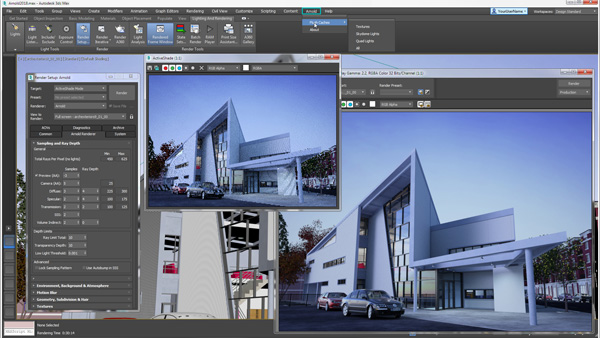 The majority of the operators and compounds have been renamed more consistently. To help you implement this renaming and also retain backwards compatibility with graphs authored in MCG 2017, an Identifier and a Display Name are included. The editor now shows dynamic information about the types flowing through your graphs. Should you happen to create any invalid connections between nodes, they will now appear in red if the connection's endpoint types are incompatible.

You can now connect a compatible array directly into a node to convert its operation into a mapped connection - an automatic way of applying an operation to each item in the array. The Node Properties panel now displays information about any selected node, as well as links to the node's use in other compounds. 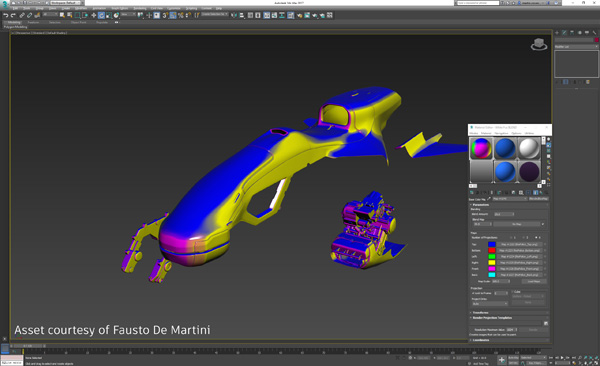 The Workspaces function in 3ds Max 2018 will now switch quickly between various custom interface setups. It can restore specific arrangements of toolbars, menus and viewport layout presets. When you switch to another workspace and back again, each workspace is restored as you left it - all workspaces persist between sessions. Also, 3ds Max remembers which workspace was active at the end of the previous session and restores it to active status. Alternatively, 3ds Max has several workspaces preconfigured for users.

The new Blended Box map for working with projected texture maps allows you to project maps onto objects in a simpler way than using UV mapping techniques, customizing the maps and output more easily. It can work well in situations when you want to apply a box map across one or more objects to map them from all sides, such as applying dirt and grime details.

Working similarly to box mapping, Blended Box map projects images from three 90° directions. You can project 1, 3 or 6 different maps for every side of the projection box. The main difference between the two mapping types is blending. Traditional box or cube mapping would create hard seams between the different UV projections, where Blended Box mapping gives the ability to blend between the maps for less visible results. 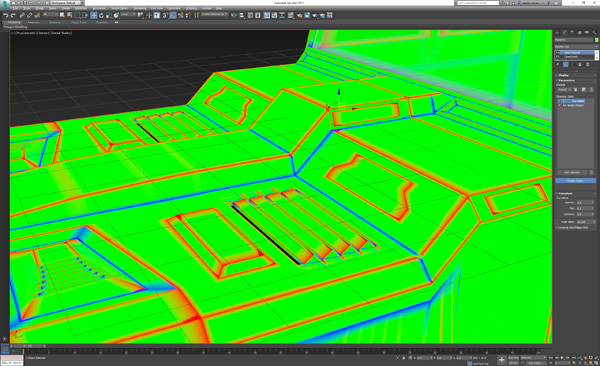 The new data channel modifier will extract information directly from a model, which can then be used to base other types of modifications on. A data channel is a piece of information that describes a mesh. There is a channel for vertex positions, edge creases, face normals, soft selections and so on. The modifier allows you to pipe the data through transformative controls or operators to apply FX that update dynamically while you work.

Further to texturing, the data channel modifier works via a procedural workflow. This is faster and easier than applying hand-painted textures to models as bitmaps, which requires re-painting every time the topology is changed.

New Motion Paths preview the path of animated objects as a graphic representation. In other words, motion paths are a visualization of the same transform animation data that you watch in Track View. Any changes made using motion paths are reflected in Track View and vice versa. You can adjust motion paths directly in the viewport using transforms, and convert them to and from splines. 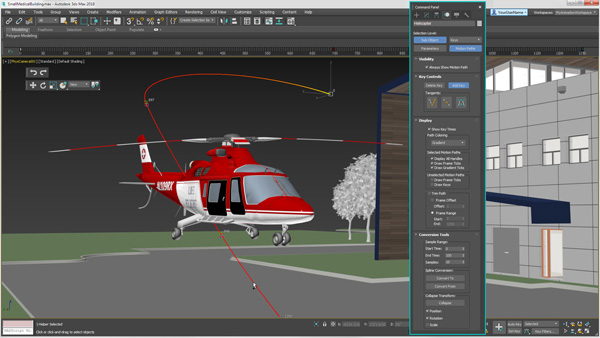 You can use the motion path controls to display the 3D path for a selected object’s position tracks, and insert and delete keys along the path. You can then change the shape of the path using transforms to move, rotate and scale the keys, or convert a path into a spline object. Conversely, it is convenient to just use a spline object to create a motion path.

The significant updates in Arnold version 5.0 include better light sampling, AOVs per light group and new standard surface, standard hair and standard volume shaders. The software now supports the Open Shading Language (OSL) and includes light path expressions. It also has a refactored shading API and a VR camera. Beyond these updates, Autodesk says that Arnold has shifted to a new architecture in order to accommodate its future developments. Improvements to the Arnold core allow faster rendering and better sampling performance overall, including dithered sampling.

Arnold 5’s C++ API has been refactored, extended and simplified so that writing new Arnold-based applications is easier and results in more consistent code. Existing applications will need to be recompiled to take these changes into account. New APIs have been added for procedural geometry nodes, custom colour manager nodes and preprocessing texture maps.

One of the main goals of Arnold 5 is ease of use, especially in terms of workflows. Installation and deployment is easier, particularly in the cloud, due to built-in libraries such as OpenVDB 4 and the use of new built-in shaders instead of 3rd party shader libraries. Maintaining a linear workflow is easier owing to a new colour space manager. A VR camera node comes with Arnold as well. Procedural geometry and volume plugins no longer rely on bounding boxes, and namespaces make it easier to assemble complex scenes that reuse assets.

Internally, all of the Arnold built-in shaders rely on closures now. Closures make it possible for shaders to reflect future improvements in global illumination algorithms, without having to modify the actual shaders.

Many subsystems in Arnold 5 have been optimized for speed during render start-up and ray-trace time. Depending on multi-threading in your computer, indoor scenes with multiple GI bounces, objects with high transmission depth and certain transparent surfaces render many times faster. In many cases, images render both faster and with less noise.

The new built-in shaders in Arnold 5 are physically accurate. The Standard Surface shader is an energy-conserving, physically-based shader capable of producing many types of materials and looks. It includes a diffuse layer, a specular layer with complex Fresnel for metals, rough specular transmission for glass, subsurface scattering for skin, single scattering for water and ice, a secondary specular coat and light emission. 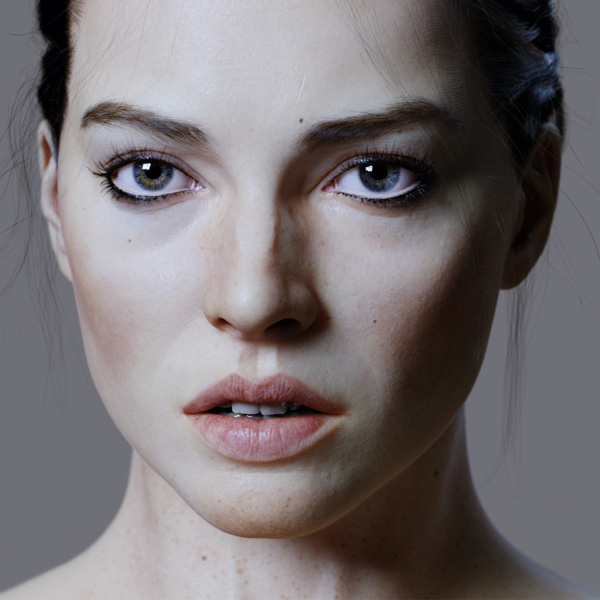 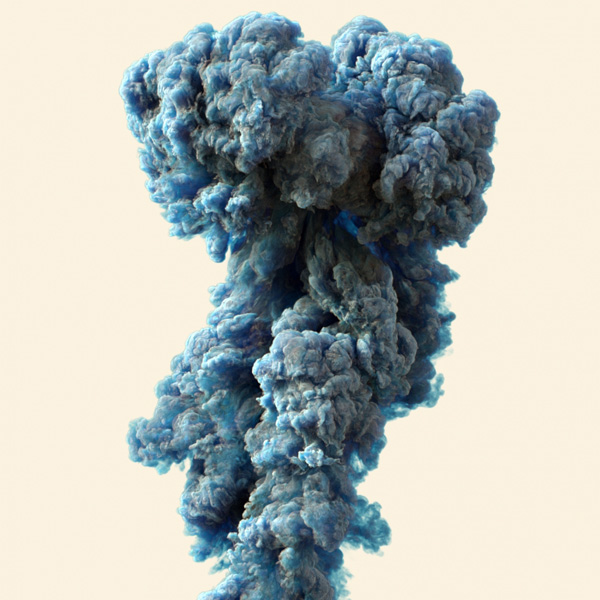 Standard Hair  renders hair and fur, obtaining realistic results by setting only a few parameters for the base colour, roughness and index of refraction. The Standard Volume shader simplifies rendering of smoke, clouds, and explosions, without having to create convoluted shading networks. This shader independently controls density, scattering colour and transparency.

Arnold 5 is available now as a standalone renderer, as well as a plugin for Maya (MtoA), 3ds Max (MAXtoA), Cinema4D (C4DtoA), Katana (KtoA), and soon Houdini (HtoA) and Softimage (SItoA). Individual licenses can be purchased from Solid Angle.  www.autodesk.com