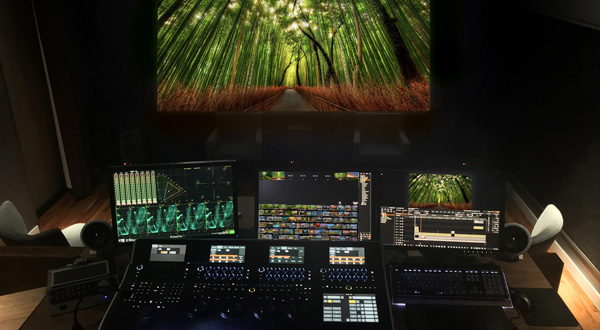 Running Man in New York City carries out post-production work from offline to finishing, mastering and delivery to networks and distributors including Netflix, HBO, TBS, Comedy Central, FX, Showtime, MTV, Facebook and others. When they decided a short time ago that their storage infrastructure, whhich was only capable of volume level sharing, was inadequate, they invested in a new shared system centred on the Facilis HUB One server.

Aware of the large number of vendors in the storage market, the Running Man team looked at several storage options before eventually choosing Facilis. “Products on the market range from big companies prepared to undertake very large installations to people trying to put systems together with a simple NAS device,” said Troy Thompson, executive producer and supervising colourist at Running Man.

“We took our time and made sure our next investment was in the right direction for the company. Facilis could supply a fairly large volume of storage at a price that competing systems could not match, with no compromise in performance, and the flexibility of the system is valuable to our operation as well.”

Running Man invested in the Facilis system with the help of Bob Spencer and Cliff Allen at VTG, a New York area reseller specialising in shared storage, archive and asset management. It includes a Facilis HUB One server that aggregates their existing high-capacity storage servers, allocates resources and offloads the shared file system processing, aiming for efficiency.

The core of the Running Man facility is made up of four finishing suites where both HD and 4K masters are completed. Troy said, “Facilis has been critical to our operation, serving as the backbone of our offline and online environments. It gives us the ability to share projects across several edit rooms during the offline stage. As a project moves to finishing, we can connect those suites with 32Gb Fibre Channel for maximum performance.”

The finishing rooms can either work in isolation on different projects, or the team can deploy all the rooms to finish a single project. If there are resource constraints and turnaround time is pressuring the team, quickly changing configurations is simple. “We are actually doing that right now with a couple of shows where at least four different people handle the project through the finishing stage. We couldn't turn around the job in time if we didn't have the ability to deploy the skills and tools needed for any project assets in any room,” says Thompson.

For offline, Running Man supports both Avid and Adobe workflows, although the lion’s share of the work is completed in Avid. “We have always been an Avid shop, since we started in the mid-1990s. For finishing, we went with Nucoda from Digital Vision. As a smaller company, Digital Vision is doing a lot of great work with their equipment – all of our finishing rooms house Nucoda systems. We work with either 10-bit, 16-bit or 32-bit EXR files and our Facilis system plays it all back flawlessly,” Troy said.

In terms of resolutions and formats, Running Man sees the full range, however, Pro Res HQ is one of the standard choices. Even when their deliverables call for IMF, DCP or DPX, Pro Res HQ is frequently part of the request as well. “We deliver over 100 episodes annually as 4K IMF packages, which are all derived from uncompressed DPX outputs coming off the Facilis,” said Troy.

“We also play and review all our DPX timelines directly from the Facilis volumes. In the mastering stage, we output either a DPX or an EXR sequence from our colour grading systems and we pull that into a mastering system that wraps it into whatever format is required. The Facilis system gives us great flexibility as it allows us to move over to another room if a particular system is tied up and pick up the work immediately, since everything is tied to the same storage backbone.”

The offline network is tied together with 10Gb Ethernet and the finishing suites are connected directly to the Facilis HUB One server via 32Gb Fibre Channel. Those suites also share a 1Gb Ethernet connection to the Facilis system. “This allows us to keep the colour systems a bit isolated from the rest of the space, but also enables the finishing rooms to have access to the offline storage in order to pull any additional assets that might be required for finishing.” 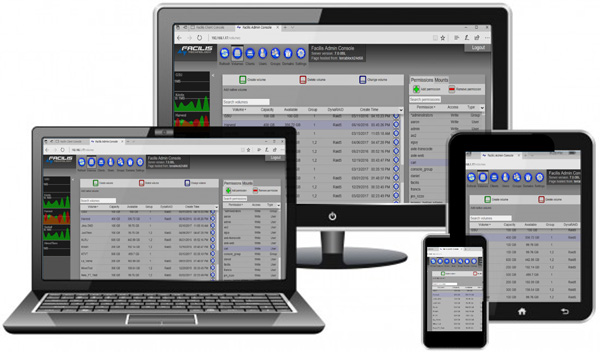 “I designed and engineered the whole Running Man facility myself,” Troy said. “That’s part of what was attractive about Facilis. It isn't intimidating in terms of the install or even maintenance. For the most part, we’ve actually been able to handle all those background tasks ourselves.”

Troy likes working with the Facilis Web Console to administer and manage the shared storage environment. Logging in from a browser on any device that can access the server IP address, he can create, change and set permissions on project-based storage volumes and deploy them to the facility workstations. It’s also possible to monitor real-time bandwidth usage by workstation and volume and apply the optimal server and client connections dynamically.

“Using the web interface to control different elements has made a tremendous difference for us,” he said. “Deploying software updates from the web interface has made upgrades much easier because there's never a perfect time to do that kind of work. Hopefully, people are working, hopefully the rooms are busy. You don't want to go in and change a lot of variables.

“We used to try scheduling such things in the off hours or come in early in the morning, but now the upgrading and deploying process has gotten so much faster and easier, it’s something that we can schedule during a lunch break. We no longer have to go into every room to deal with permissions or any other management tasks. It’s all done from a central computer.”

Running Man emphasises security for their clients’ assets. Security, and the ability to document processes was an important part of the team’s initial requirements when comparing storage options. “We are constantly refining our procedures for managing permissions as well, to prevent giving people permissions for volumes they shouldn’t have access to.”  facilis.com