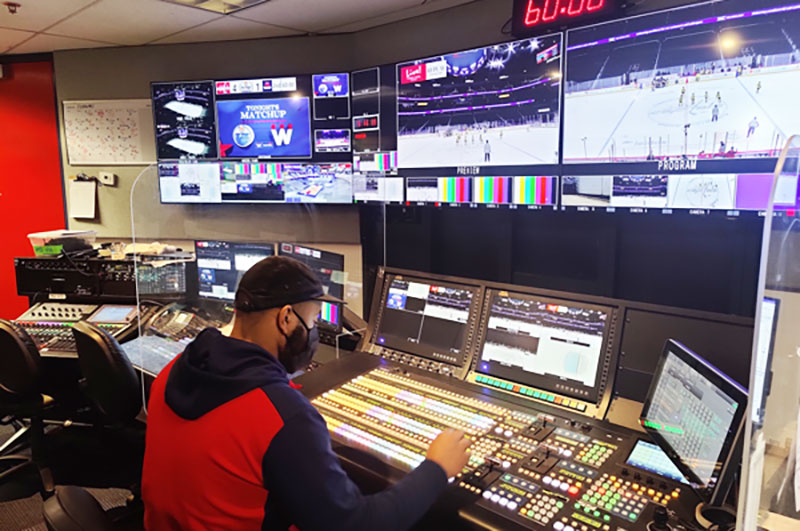 The owner of the Capital One Arena in Washington, DC, Monumental Sports & Entertainment (MSE) has completed a $15m A/V upgrade to the venue, focussing on improving the in-arena viewing experience for fans of professional sports teams NBA Wizards and NHL Capitals. The changes are also an advantage for fans of college basketball, including the Georgetown Hoyas plus the NCAA, ACC and Big Ten tournaments, all of which use the arena.

All together, the video displays at the venue combine to deliver almost 20,000 sq ft (about 1860 sqm) of 4K UHD video, contributing to the storytelling potential of live sports coverage. For fans attending events, the focus of attention is the new scoreboard hung above the centre of the arena featuring a 360-degree continuous screen with 4K UHD video across eight distinct display areas. Four two-sided, curved video screens installed in the corners of the arena also give the fans in the upper levels access to stats, out-of-town scores, replays and live action video.

Behind the scenes, a system of video production switchers, multi-viewers, servers, keyers, recorders, character generators and slow-motion replay systems must be integrated to create the super-sized visuals MSE aims for within the Capital One Arena. In planning for their video production upgrades, MSE compared numerous systems for features, price, functionality and reliability, as well as customer service to help them keep shows running to plan on the big screens.

The Gear Behind the Scenes

"I have had lengthy experience with FOR-A systems from jobs at previous employers," said Ryan Dillenbeck, Chief Broadcast Engineer at Capital One Arena, "The equipment is always high quality and affordable, and their reps have the answers I need and are quick to respond."

The central hub of the FOR-A system is the HVS-2000 Production Switcher, a 2 M/E switcher that can be extended to 6 M/E performance using FOR-A’s MELite architecture. MELite allows each of the switcher’s four AUX buses to serve as a complete M/E with cuts, mixes, wipes and keys, all of which have previews. This architecture also means that with a 3 M/E HVS-3320 control panel, the switcher is expandable up to 48 inputs/18 outputs or 40 inputs/22 outputs. This creates options, ranging from delegating M/E resources across several surfaces, to allowing a single operator to control independent transitions on multiple monitors from a single desk. 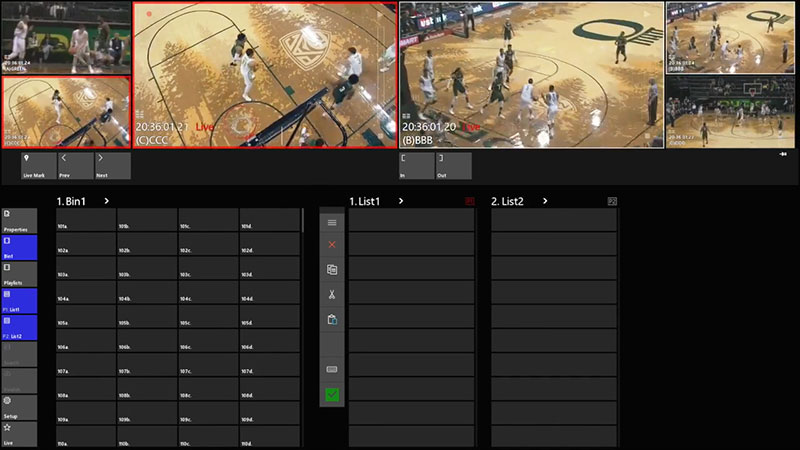 "It's the primary switcher for the centre-hung scoreboard, and has expanded our keying capability and ability to easily send more feeds to more places," said Ryan. "It also has more source inputs than our previous switcher, and macros we use to go rapidly from one in-game element to another. The result is more complex productions delivered to more screens within the building, which the fans really enjoy."

After a thorough one-month testing period, the MSE video production team chose an Envivo Replay System from Variant Systems Group, a slow-motion system up to six SDI inputs and two SDI outputs for setting up numerous replay channels and camera angles. "It was originally connected to our primary control system as a second replay system, but we're using it as a primary now since its ability to output a highlights package at the end of the night is so much faster," Ryan said.

"It has social media plugins for pushing clips to the web quickly. We can publish clips, playlists or stills with branding because tools integrated into the software allow bmp, png and jpg files to be imported for graphic overlay on each input/output. Its ease of use and set-up for anyone with basic computer skills were major factors for us. On the main UI layout we can view multiple clip bins and playlists simultaneously, while we access the tools from the Tool Bar. "

Producers, directors and team coaches can all use the MV-3240 External Multiviewer located in the arena's primary control room. It displays custom multi-view windows and integrates into the switcher's tally system, which identifies originating sources by tracing signal paths through various types of routing and processing equipment – including switchers. "The crop/resize feature for creating many different MV layouts for the various shows is a great advantage," said Ryan. "With the available outputs and tallys I can use legacy equipment and expand the system."

Finally, Ryan’s team records and plays back packages and pre-production elements through the Insight Production Server, which gives them a level of independence. "It accepts a wide variety of file formats, so we are not constantly going back to the editors and content providers for new transcodes. Generally, elements will playback directly, on the fly." A flexible event processor, Insight connects to multiple devices and interacts with the video switchers, routing switchers, CG generators, GPIO connected devices and other studio equipment to orchestrate event triggering. 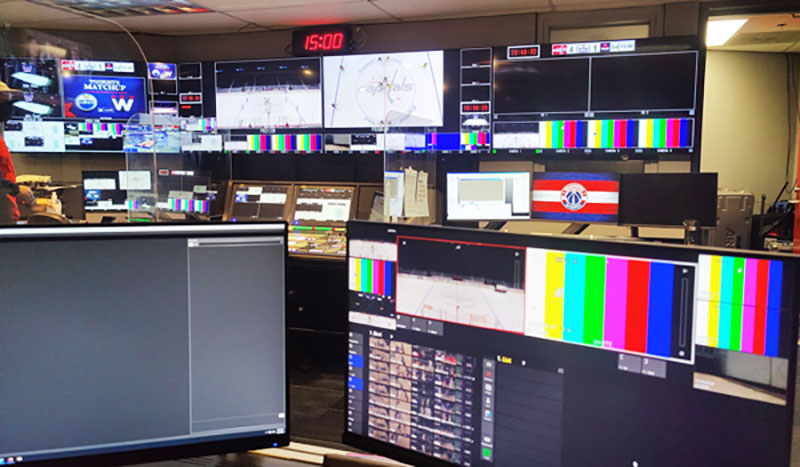 MSE’s FOR-A system includes archiving and exchange functionality for the arena's recorded materials. Ryan chose the LTR-200HS7 Linear Tape Recorder/Player, a multi-format LTO-7 archiving recorder with 6 TB of internal storage, for this part of his team’s work. "We store whole seasons and more onto one compact, long-term archival storage tape. Each sport has its own tape, which holds two seasons, which saves a lot of space in the building. The video editors like that it works like a VTR deck, alone and without any computers or software, and has an easy interface whenever they need to get videos from the tape to the edit suite."

Considered one of the busiest sports venues in the US, the Capital One Arena video team's goal following this A/V upgrade is to give every spectator a ‘front row’ seat with an in-arena experience that incorporates instant replays, live action video, stats and out-of-town scores playing on screens throughout the facility. Beyond instant access to the ideal video, audio or graphic element to run after a dramatic three-point shot wins the game, the arena is able to push assets directly to social media, delivering a complete fan experience. www.for-a.com