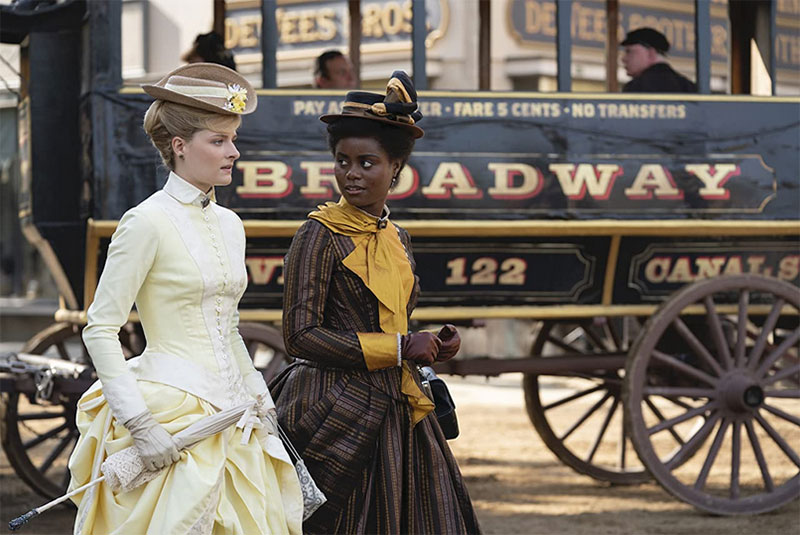 Set in New York City in the 1880s, a time of conflict between old traditions and new expectations, HBO original series 'The Gilded Age' contrasts two families from different socioeconomic backgrounds and the relationship between them as they navigate this period of immense change. Cinematographer Vanja Cernjul, ASC, HFS used Cooke Optics spherical S7/i and Anamorphic/i to visually show the contrasts between these two groups.

“The first challenge we faced was visually distinguishing the two social contexts at the heart of the story”, Vanja said. “We didn’t want to use any distracting or obvious stylistic choices but wanted the differences to be felt rather than seen. We wanted the world of ‘Old New York’ to feel like the romantic paintings of the early 1800s, with their idealised sense of the past and escapism from waves of change that came with industrialisation.” 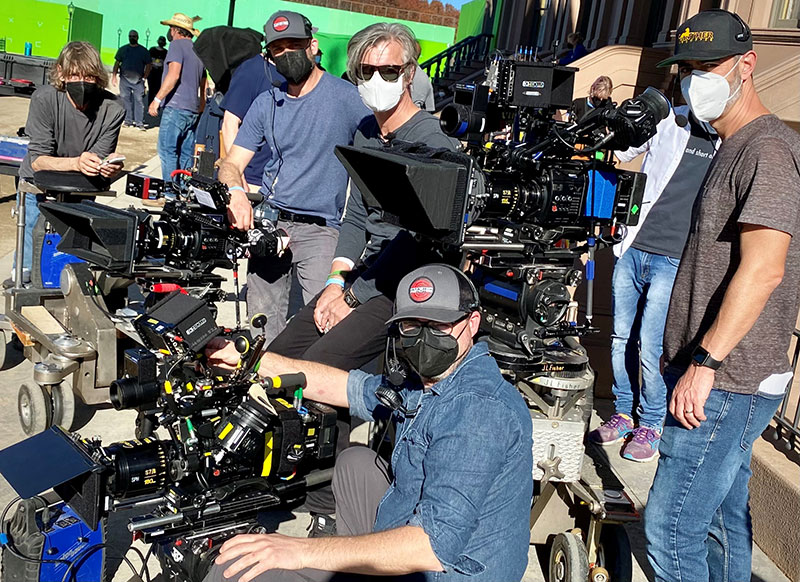 To make this distinction, they devised subtle photographic choices. Vanja said, “One of my early ideas was to use different optical systems for different parts of the story. Anamorphic lenses and the characteristic artefacts they produce would add that hint of nostalgia and romance we wanted to give to the ‘Old New York’ milieu. Spherical lenses, on the other hand, being sharper and cleaner, would serve the ‘New New York’ part of the story.”

They chose the Cooke Anamorphics and the spherical Cooke S7/i, using the Cooke Look the production loved to bond the two looks together. All Cooke lenses are colour-matched, which allowed Vanja to interchange them confidently. 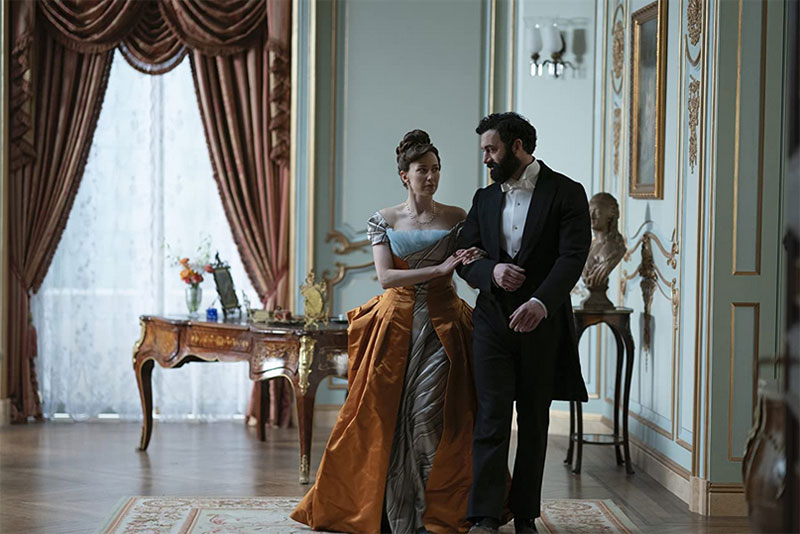 Another distinction between these stories was texture. “We used the real-time texturing tool LiveGrain to give the two worlds slightly different grain textures,” Vanja said. “The ‘Old New York’ texture was based on the shape of the Kodak EXR colour negative grain, while the ‘New New York’ had a slightly different grain shape based on Kodak Vision3 colour negative. These two film stocks were from different eras in film history and we wanted to use their textures for storytelling rather than to just simulate film grain.”

Production Designer Bob Shaw and his team built sets at the Broadway Stages in Queens, NY and at the Gold Coast Studios in Bethpage, NY. The backlot set was built next to the Museum of American Armor, also close to Bethpage, NY. Originally, the plan was to use some locations in Manhattan, but because of pandemic restrictions, crews larger than 50 people were not allowed to shoot in New York City, so we had to move out of town. Most of our location work was done in Newport, Rhode Island and Troy, NY.” 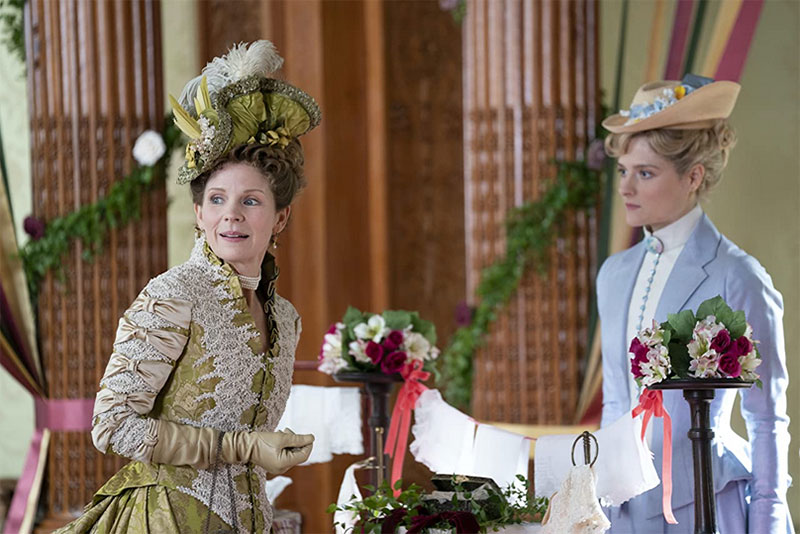 The competition between the ‘Old Money’ families like the Astors and the ‘New Money’ entrants like the Vanderbilts to show off their unprecedented wealth is still on display today in Newport. “These extravagant mansions, now preserved as museums, were perfect sets for us. It was truly a privilege to be able to shoot in these amazing historic locations. It was fascinating to see that most of these grand salons, dining rooms and master bedrooms still had original window dressing and carpeting,” said Vanja.

“One of my first observations while scouting these grand locations was how everyone behaved when they first entered the rooms, first moving their heads from side to side in awe, then looking up at the magnificent ceilings. Then some people would rotate their bodies around in an effort to take in the space. I had conversations with our two directors about how to translate that experience into a two-dimensional film frame.”

Most of the characters in the story were used to living and working in places like these, which meant a moving POV wasn’t appropriate. Instead, they wanted to see the characters in a frame wide enough to show the spaces in all their glory and serve as a scale. We didn’t want to use an extreme wide-angle lens also had to be avoided to keep from drawing attention to the camera and distorting the architecture.” 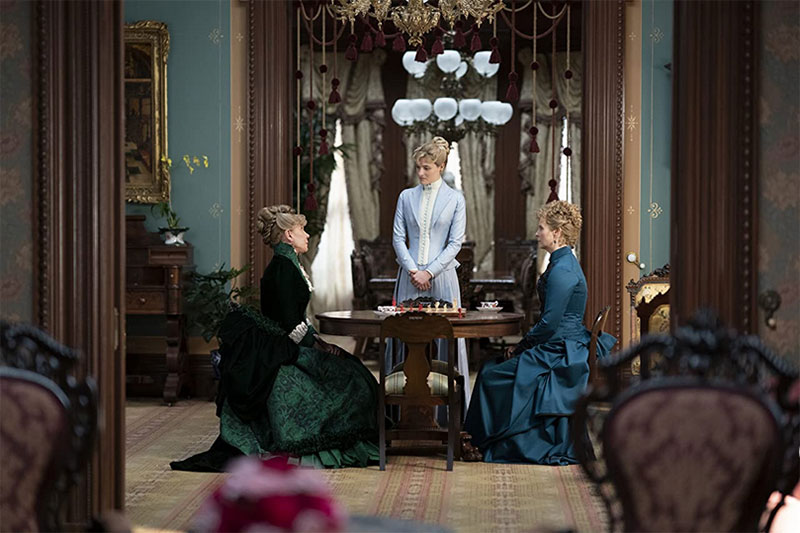 Vanja’s solution was tiling and stitching. He shot a simple test placing a stand-in into the central ‘master frame’ and then shot eight other tiles that were stitched into an extremely wide shot. “Our VFX department stitched the tiles together and corrected as much of the distortions and bending on the edges of the combined panorama as they could. The director loved the result,” he said.

“We used this technique every time the story took us to a new location. We would shoot the master frame with actors and then shoot the tiles of the whole room. There was a bit of a learning curve on how to make this process fast and efficient in order to repeat it every time a scene called for one of these shots.”

The process of shooting and stitching the images together started with putting the camera in a nodal configuration to define each tile. “Our first AC John Oliveri figured out a quick procedure. The scene had to be lit in a way that would allow shooting additional tiles without major re-lighting and without leaving any lighting or grip equipment visible in any of the tiles. We also had to make sure that all the action would fit inside the ‘master tile’ without reframing. 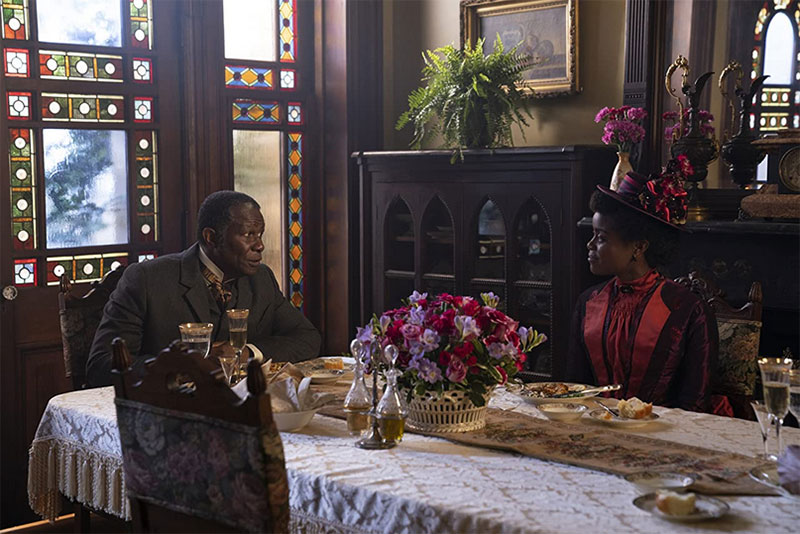 “Once VFX combined all the tiles and corrected the geometry, each one had to be cropped slightly to fine tune the compositions. I am not aware if this technique has been used this way before, but it became one of our signature shots, which we named ‘Master Panoramas’.”

Although the Panasonic Varicam PURE camera doesn’t have the ability to record the Cooke lens /i Technology data, it can read and pass through the data to the camera’s video outputs. That would become very useful, according to the first AC John Oliveri. “The /i Technology was very helpful not only to our DIT Matt Selkirk but also to both of our DPs, Vanja Cernjul and Manuel Billeter,” he said. “They were able to monitor the iris setting and lens size at all times. Plus, it was helpful to our VFX team to see it displayed instead of constantly asking the camera assistants for the information they needed.”   cookeoptics.com