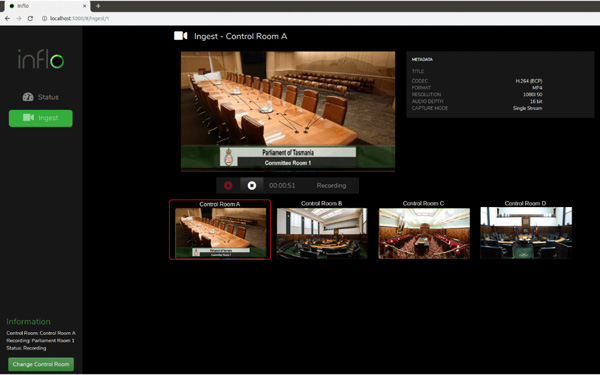 The Tasmanian Parliament uses a custom-built recording system to manage the seven HD-SDI camera video feeds from their House of Assembly, Legislative Council and committee meeting rooms. When deciding how to approach the system build, their main requirements were to centralise ingest in a single location connected to network-attached storage and to control the recording process remotely from a network.

To meet those demands, the Parliament staff worked with Australia/New Zealand systems integrator Techtel, who designed and integrated a browser-based software application consisting of a purpose-built web interface that manages up to four simultaneous recordings of their video feeds. Giving the Parliament complete remote control of their video recordings, the web application’s interface uses a REST API to integrate with a video server from Bluefish444.

The setup enables a single operator to control multiple HD-SDI video outputs from up to four simultaneous events from a single web browser with tools allowing the user to drill down into the footage in detail. A streaming capability from the video server generates video thumbnails on demand and sends them back to the control desk as confidence monitoring for the operator. 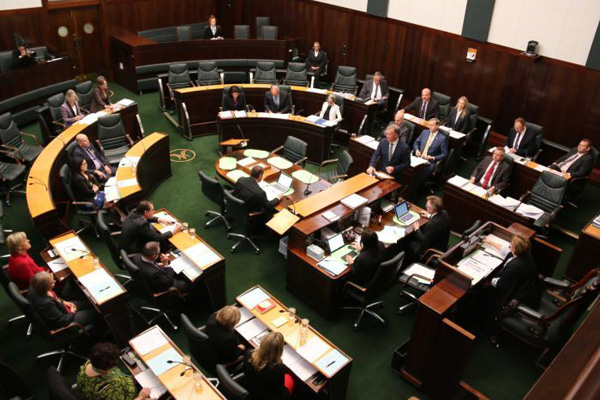 The server that Techtel integrated was the Bluefish444 IngeSTore Server, which allows them to record simultaneously from up to four of their SDI cameras at any one time. IngeSTore Server includes a RESTful API and supports capture to local or network-attached storage, recording to a variety of formats that are used directly for broadcast, post-production, archival and streaming.

“When we were engineering an ingest solution for this customer, we had to focus on quality,” CEO at Techtel Mal Chandler said. “Bluefish444 had everything we needed. The RESTful API interface has made a huge difference for us because it means we don’t need to install software on premise, which is absolutely vital to our goals of producing cloud native software.”

In order to allow Tasmanian Parliament to control the IngeSTore Server from anywhere on their network, Techtel built upon the Bluefish REST API to design a user interface with the ability to choose codecs and capture modes directly from a web browser. This interface was derived from Techtel’s in-house software integration platform called Inflo, which connects video files in multiple formats from multiple platforms and applications via one single interface.

The Inflo service was developed for organisations who deal with large amounts of diverse video content, helping them aggregate their disparate subsystems into one intelligent system and manage it for multiple functions.

“Our Inflo system can scale to any number of IngeSTore Servers, and we can supply it as turnkey platforms or simply plug into a customer’s COTS hardware. We have total control over the codec parameters and we know that what we produce will be well-supported, because Bluefish are specialists,” said Mal.

Since the original installation in mid-2019, Tasmanian Parliament has been remotely recording their SDI ingest utilising Inflo and IngeSTore Server very successfully. Techtel apprciated how quickly the integration of IngeSTore via the REST API proceeded and with the Bluefish system now proven for remote network capture, are hoping to employ IngeSTore Server for similar projects in the future.   bluefish444.com