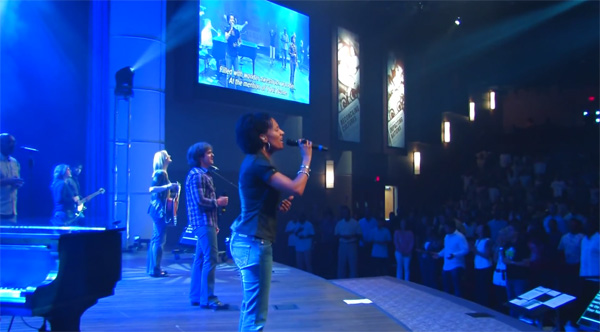 Victory World Church in Georgia in the US has grown into a very large operation with two external campuses and an online congregation of over 8,000 people. The members regularly participate, either in person or via live feeds, in weekly services that are now quite sophisticated productions.

The lead video engineer at the church Chris Winnie oversees the hardware infrastructure involved in capturing and distributing video to their dispersed audiences across the entire organization. “Everything that we broadcast is live to stream. There is no produced content,” he said. “This type and level of programming demand stability and reliability in production. We use a lot of AJA equipment for the routing, synchronization and recording and playback.”

A typical Sunday service at Victory fills the main church to capacity, seating 2,200 people along with two overflow rooms that seat 900, plus satellite campuses and online viewers that reach thousands of online viewers tuning in to live broadcasts.

“We’ve encountered problems in the past trying to use budget-quality equipment, so when we work on our infrastructure now we go with top of the line equipment and don’t cut corners,” Chris said. Therefore, a typical Sunday service is captured by four Hitachi cameras, one on a jib and three on tripods with operators, along with three Canon cameras with operators that are mobile on stage.

The main video router for the production itself is a Grass Valley Miranda with 512 inputs and 576 outputs. A Ross Acuity switcher is used to control video from every source in the main sanctuary and works alongside four computer graphics workstations. The workstations all run Pro Presenter and are directed to display different graphic overlay and lower thirds content for each of the live streams, whether the feed is for the main campus overflow room, a satellite location or an online channel.

The mobile stage cameras go into an AJA FS4 4K/UltraHD frame synchronizer for frame syncing and format configuration to 1080i at 59.94. Clean feeds from all cameras go into a combination of Ki Pro Racks and Ki Pros that are housed both in a server room onsite and offsite at the external campuses.

The campuses are connected with dedicated fibre and each Ki Pro lives on the same network for straightforward file transfers back and forth. Chris is able to control all of the Ki Pro devices via the web interface served from the Ki Pros’ built in webservers, triggering gang recording remotely. AJA FiDO fibre converters are used throughout the facility, mainly to transport signals to the projectors in the main auditorium.

Onstage behind the 10-piece band is a 30ft video wall, plus two 16ft screens on the left and right side of the sanctuary. The set-up is also flanked with four vertical projection pillars, all fed with real-time content from the Ki Pros via Avolites AI video mapping software. The content featured on the screens is generally a combination of motion background loops, live video, lyrics videos and other content. AJA’s KUMO 1616 router is used to route all of the video to the screen surfaces on and surrounding the stage. KUMO connects to a Hog 4 lighting programming console to change the video routing and reflect what the AI media server is doing.

AJA ROI region-of-interest scan converters are used to feed three on-stage monitors so that any given presenter can get a complete picture of what content is being played at any given time on screens throughout the sanctuary, communicate with the video director, and also review any related notes during the show. The Miranda main video router controls all of the audio embedding and de-embedding that goes into the Ki Pros.

The next project for Chris is a new control room build out with the team at Clark, exclusively for the church’s online campus to ISO record every camera and destination via Ki Pro Racks. He said, “An advantage of using the Ki Pro Racks is that we can record and playback live while the show is going on, and immediately have a recorded segment to hand off to an artist who may want a copy of their performance for another purpose.”  www.aja.com