DP, Colourist and Mikros Image Catch the Look for ‘Lupin’ in Baselight

The French series 'Lupin' has become a worldwide success for Netflix, ranking number one in more than ten countries. The series follows Maurice Leblanc’s French literary character ‘Arsène Lupin – Gentleman Burglar’ in ten episodes, setting the stories in modern Paris instead of 1905 when the original stories were written.

Head of digital cinema Mathieu Leclercq at Mikros Image worked with the DP Christophe Nuyens SBC and colourist Aline Conan to create the look for the show.

Early in pre-production, Christophe created a set of mood boards to serve as visual colour references and atmosphere. “We discussed the look with director Louis Leterrier, who gave me a lot of freedom. Our work then served as a reference for light and decoration,” he said. “For example, for the flashbacks, we chose a colour palette different from that of the present day, to light a little more, to look for the flares. In grading we warmed it up slightly, but the desired aesthetics were already there.” 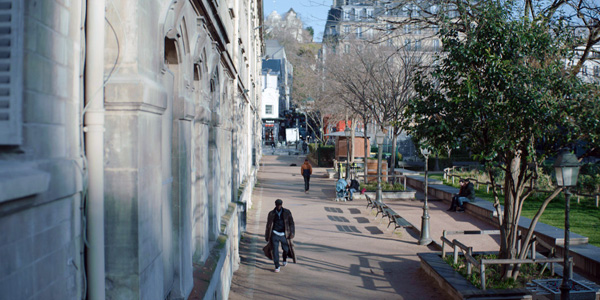 One of the main challenges of the series was to film Paris in a cinematic way, and avoid making it look too much like a tourist destination. It was shot on the ARRI Alexa LF. During the shoot, Christophe used new Technovision Classic Lenses with a 1.5x squeeze factor from PSTECHNIK, specialists in anamorphic cine lenses and vintage lens rehousings. These lenses are inspired by the anamorphic Technovision of the 1960s, which attracted attention at that time for its use in films such as 'Apocalypse Now' and 'Leon'.

“These full aperture optics have a very soft flare, with a slight diffusion,” said Christophe. “It gives an organically textured feel to the image that has allowed us to have a modern fairy tale aesthetic for ‘Lupin’, while avoiding the use of smoke, which isn’t allowed in settings like the Louvre.”

Christophe and the production team looked for a French colourist with experience in both feature films and TV series, and soon met colourist Aline Conan. “I already knew Christophe from his work and reputation, especially for the series ‘Zone Blanche’, a supernatural thriller,” Aline said, “so I was happy to join the team, and also to work with Christophe for the first time.”

One of the visual references Christophe passed to Aline was another Netflix series, ‘When They See Us’, in particular for the rendering of its anamorphic optics, the large sensor camera, the certain softness – but with a few adjustments to suit the new series. “For ‘Lupin’, we are not so soft and dark, to better match the story,” Christophe said.

The colour grading work began well in advance of the actual grade, when Netflix suggested their team arrange time to research and pitch different moods to them. Aline said, “Since ‘Lupin’ streams in HDR Dolby Vision, our goal was to deliver a clear high-quality picture, in balance with the fairly smooth aesthetic that Christophe originally wanted.” Baselight made it possible to adapt the film LUT that Christophe is accustomed to using, for the HDR Dolby Vision workflow. That helped establish a colour-managed pipeline as recommended by Netflix.

For Netflix, colour management means they can set up a predictable, repeatable way to view images and convert between colour spaces, based on different capture devices and display types. Colour management also allows them to make sure all colour decisions and VFX work are done in a scene-referred colour space to keep more flexibility in post, and to achieve high quality archival masters that have scope for further uses in the future.

From there, the colour pipeline sets out the essential colour space definitions, transforms and deliverables for a project, determined from the source, working and final delivery colour spaces. By involving all departments responsible for viewing, sending and receiving images, the production can verify that all points in their colour pipeline are aligned.

“Because of the HDR grade, I used the Texture Highlight tool when too much detail was felt in the highlights,” said Aline. “We sought to ensure that the brilliance in the image always remained harmonious. When certain details became too prominent in the image because of the HDR, we made sure to decrease their presence, in order to keep the attention where it needed to be focused.”

“During the grade, we used a beta version of the Lens Correction tool, which allowed us to correct some distortions caused by anamorphic optics. We also used it to reapply these distortions on some shots filmed on drones with spherical optics.”

The Lens Correction operator, which was new in the most recent v5.3 of Baselight, corrects or applies lens distortion either by analysing the image or by using presets for specific lenses. The colourist controls the level of distortion or correction, making the tool useful for creative grades or preparing VFX plates. There is also an option to perform grading operations on the undistorted image if necessary.

Mathieu Leclercq, head of digital cinema at Mikros Image, helped establish the workflow used on the series. “After the tests, we decided to start with a colour workflow based on the ARRI Look File 2 DRTs (Display Rendering Transforms) and then added a specific look for the show, prepared with Aline and Christophe. This look fits into the workflow that is calibrated in HDR or SDR.”

ARRI Look Files are important because all ARRI cameras record in Log C wide gamut colour space. The camera uses a look file to transform the flat, desaturated image into a more life-like expressive image. It could be as a simple conversion into a HD or UHD colour space (Rec 709 or Rec 2020), despite the potential for clipped highlights and blacks.

Even for more complex changes or a creative grade, the ARRI Look File 2 (ALF 2) remains the basis of colour manipulation, holding the CDL, video look parameters and a 3D LUT. Similar to other metadata, like camera status or lens metadata, the look file is carried in each clip’s file header – as long as the original file or a copy is present, it is possible to extract the look file from it. ALF 2 gives the director, DP and costume department and a good idea of the final image.

During the shoot, a DIT on the set prepared a grade for the rushes following a fairly traditional ‘raw parameters + CDL + show LUT’ scheme. This step was done on FilmLight Daylight – this system reads the data from the headers of the camera and audio files and displays relevant metadata fields. A dailies platform for shot management and transcoding for deliverables, Daylight works as a grading decision tool used to establish looks and visualise what the DPs has shot, on set or on location.

“Once the rushes were collected at Mikros, we reapplied these values in Daylight via Multi-paste  – and replaced the LUT with the Baselight DRTs and the look,” Mathieu said. Then the lab carried out the QC of the rushes. These graded rushes were then used as the start point of the final grading done by Aline on the Baselight system.”

Each episode required an average of three days of HDR colour grading plus one day for the Dolby Vision SDR pass.

“The essential difference between grading a feature film and a TV series is time, since the more time you have, the more you can search, try, take a step back, change your mind and to go into more detail,” said Aline. “In France, you generally have proportionally half to a third of the time to grade a series than you do a feature film. On this project, I had to manage my time effectively, like you do when shooting or elsewhere in post-production.”   www.filmlight.ltd.uk