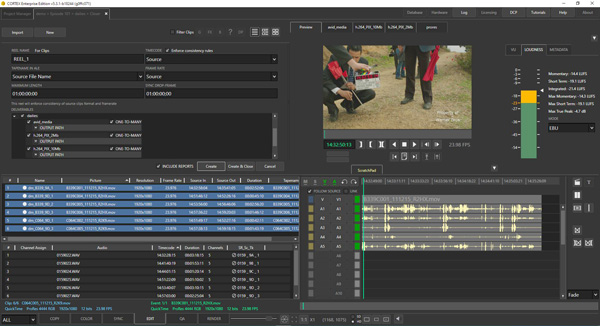 CORTEX v5.3 updates MTI Film’s software for managing workflows on set and in post and includes new functionality to make managing and processing data during production and post-production easier and more efficient. It also adds support for the recent sound and picture formats and delivery requirements of major distributors including Netflix, HBO, Hulu and Quibi.

“We are continuing to respond to changes in production and delivery,” said MTI Film Director of Product Development Randy Reck. “CORTEX v5.3 will help users meet the challenges they face from more complex workflows and delivery requirements, and tighter deadlines.”

CORTEX 5.3 users can render multiple formats simultaneously, which helps to speed up dailies processing and other workflows. Users can now keep a composition reel to render individual events so that only fixed shots need to be rendered. You can also combine and render multiple audio configurations from a composition.

The software also includes the option to automatically apply IMF delivery specs for HBO, Hulu, DPP and AS-11, as well as support for the 16:9 aspect ratio, both portrait and landscape, used by the new streaming service Quibi.

MTI Film worked with Netflix engineers to align the MTI Dead Pixel detection and repair tools built into  the Enterprise edition of CORTEX v5.3 with the Netflix detection algorithm. This system, which involves importing a .csv file supplied by Netflix, means that content can be prepared for Netflix while avoiding multiple re-deliveries to fix all pixel defects. The system is now more sensitive and include a region-of-interest tool.

On set, the Dead Pixel Detection tool can automatically identify dead pixels in the sensors of digital cinema cameras, and give early warning about faults. This information can then be stored, along with corresponding timecode information and other metadata, in a CORTEX Manifest file and passed on to post production. Dead Pixel Correction automatically repairs dead pixel artifacts, either based on the reports sent from set, by running a detection pass or now by importing a Netflix .csv file.

A new loudness meter includes features for monitoring, measuring and analysing audio levels, with results, across the full timeline, viewable in graphical reports. This makes it easier to make sure delivery media conforms to loudness standards.

CORTEX v5.3 is available in five different editions, including two for DIT applications, a dailies application, an Enterprise package for post-production and delivery, and a quality control application. The software runs on Windows 7 and 10 and can access extra power from one or more NVIDIA GPUs.   www.mtifilm.com