‘Rom’ is concerned with the lives of homeless children characterised by Rom, a young boy on the streets who survives by picking numbers to buy illegal lottery tickets for his clients and getting commissions when they win. Tran Thanh Huy and the film’s DP Nguyen Vinh Phuc worked with colourist Bui Cong Anh from Saigon to help create the look of their film.

Bui Cong Anh has 20 years of post production experience behind him on many different films, television shows and other projects. He has now been using DaVinci Resolve Studio for about five years, and recently graded a popular Vietnamese film called ‘Summer in Closed Eyes’ using Resolve Studio.

While working on ‘Rom’ he found it challenging to maintain the gritty look and feel of the slums of Saigon while creating specific looks for Rom and the other kids. He also had to strike a balance between the dark, violent look and feel of the streets, while at the same time showing Rom as a hopeful element in the story.

“For this project, we had the looks of the city and crowds, layered with the other looks for people. First we worked out the colour for the people living in a crowded Saigon slum. Huy wanted a bold look that leaned toward the warm side with lots of orange, especially on their skin,” Bui Cong Anh said.

For color correction for the individuals, Bui Cong Anh focussed on two principle characters: Rom and his enemy Phuc, each one with very different looks.

“Rom was a member of a small community in the film, so in most scenes he looked like any one of them. It was his actions that made him stand out from the rest. Only when he was alone did I grade him differently,” he said. “In many shots, Rom sat down alone on the roof, steps away from his hideout, where I added a definite, strong colour cast that varied from reddish orange for day, blue and pink for dawn to colour his solitude, or blue and pink in the clouds to lend a feeling of youth and hope. I created these looks in Resolve with curves to selectively control the saturations, then curves again to selectively boost colours.”

In the film, two scenes highlight the challenges Bui Cong Anh faced in post production. These included a nighttime fire scene and a chase scene.

“For the burning scene, the characters decide to join a night rumble at the end of the day. As a result, I found myself toning down all elements the fire to match the night, which was actually fun to do. As a night scene it came with blue light in the atmosphere, which I matched to the day-for-night effect. For control, I threw some Power Windows here and there to dim down or bring up details in every shot. In particular, I brought characters’ faces up to place the focus on them, defining the colour of the fire with the qualifier to add just the required level of heat with orange.” 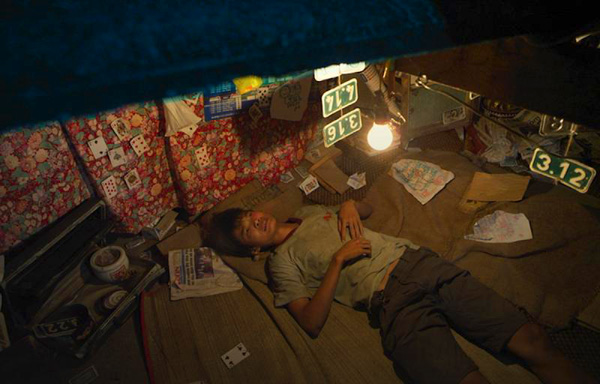 The final chase sequence combined different locations, ranging from a main street to a couple of small streets and then straight to a railway and bridge. The shots had been captured in different months in different time frames and under different sunlight with different cameras. “As a result it took me three days to match every shot of this particular scene. Without Resolve’s image wipe to closely compare and match colour, and all the primary controls for the main image parameters and secondary colour correction tools for adjustement, available inside Color page, I could not have completed this task,” he said.

In fact, the entire film was shot with a large variety of cameras, lighting conditions, locations, weather conditions and even real life events that the production encountered on location. To manage the large number of different scenarios and looks coming in from the sets, Bui Cong Anh used the ACES colour encoding system, in conjunction with DaVinci Resolve, to standardise the parameters of the images.

“With Resolve and ACES, I had an environment where I could quickly manage every shot, even before any corrections. Then to match shots within a scene, I would use the primary and secondary tools like any other colourist would, grouped all shots in a scene and built the look from there. When there was a need to modify the look, I could go to Group Post-Clip and dial the parameters required to make the changes,” he said.“

Resolve was the tool Bui Cong Anh used for many tasks – from grading to finishing and mastering – for this particular project. Once he had finished the grade, many shots needed compositing work before he could hand them off to any other team. To make that work possible, Resolve contains PowerWindows, alpha outputs and Warper in its OpenFX library.

“Those tools were enough for me to make believable composites without having to leave the Color page. Then I output shots for VFX houses in ACES-compliant EXR for accurate data exchange. The return shots also came back in EXR, so I could place them directly onto my timeline and work with them,” he said.   www.blackmagicdesign.com