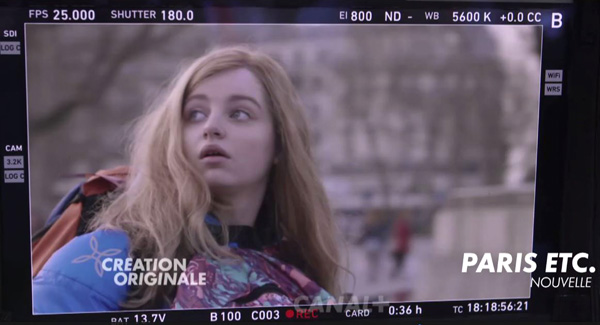 Nejib Boubaker is part of a new generation of DITs that have become professional specialists in this field directly following their academic studies. After earning a degree in cinematography, Nejib entered the Ecole National Supérieure Louis Lumière to specialise in colour science, and wrote his thesis on ACES.

He first worked at DIT cart rental facilities to learn as much as possible about the systems he would need to be able to work with, and then started working on set alongside film crews a few years ago.

He recently took on the role of DIT on the new Canal+ original series ‘Paris ETC’ in which he added FilmLight Prelight software to the production workflow, although it was still in beta at the time, and talks here about his experiences. Post-production on the project needed to be completed over a short period of time, with just a few months between the end of the shoot and broadcast of the TV series.

Consequently, starting the grading process on set seemed like a good idea to the DP Antoine Roch AFC. He contacted Nejib about the job, explaining that the final grade would be done at Le Labo in Paris using a FilmLight Baselight colour grading system. 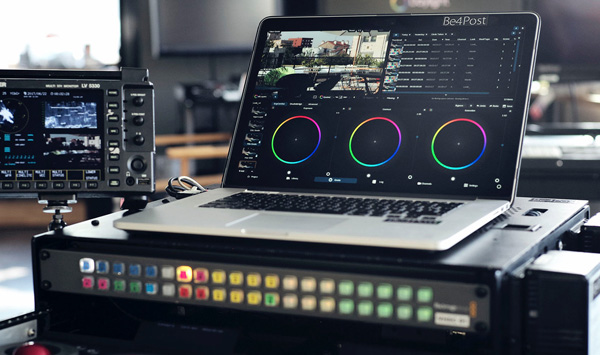 It was Nejib who suggested using FilmLight's Prelight, an application that was developed to allow DPs and other members of a production who have no formal colourist's training to author, apply and modify their own looks.

Looks developed in a grading suite during test-shoots can be imported into Prelight, previewed with the material shot during a shoot and then further refined while still on set, using a slightly simplified version of Baselight's real-time grading tools. Looks can also be created from scratch in Prelight, then exported back to the grading theatre and combined with the original raw camera footage to reproduce exactly the same looks for the final grade.

These workflows are achieved by carrying all metadata to and from set, including the creative decisions made with Prelight, and make production consistent and continuous because the same intentions for the grade can be seen at all stages later on in the post pipeline as well. Look data and transform LUTs can be imported directly into Baselight, and also into Baselight Editions for working with 3rd party software, so that original raw camera footage can be worked on with the same looks in visual effects, editorial and the final grade. 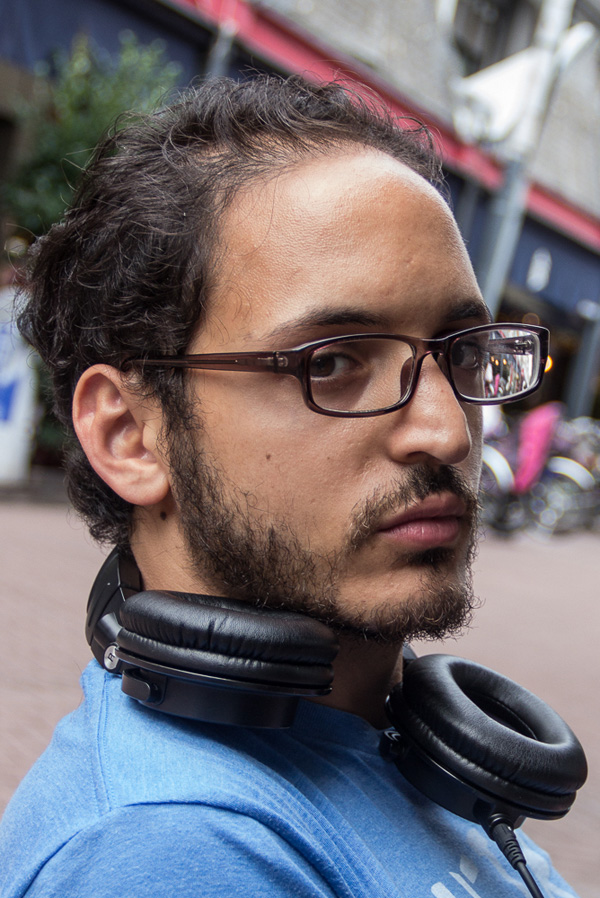 Nejib said, “I suggested Prelight mainly for two reasons. First, Le Labo likes to define a colour space workflow at the start of each project with their colourist, and using Prelight meant we could use exactly the same colour spaces and DRT settings that they had chosen. DRTs are what FilmLight's software uses to recreate the colour rendering and tone mapping that the camera uses internally.

“We could feel confident that the on-set monitoring would be identical to the grading room projection, and the colourist would be applying his grades in the same working colour space that we were using - an essential factor in a proper exchange of grading values between set and post-production.

“Second, it also allows us to use the FilmLight BLG file exchange between Prelight and Baselight. BLG files contain all the layers of colour corrections for each shot, and all the grading values can be modified or removed by the colourist, including shapes and keyers. There is nothing destructive in those files, and they also place no limits on the creative grade. So I could deal with any requests from the DP on set, knowing that this work would be usable by the colourist later on.”

The BLG (Baselight Linked Grade) format is a multi-channel OpenEXR file type used to create, transfer and review looks. A look in this case is not only a LUT or restricted grade but the full creative intent for a project with all the individual grading layers. It includes all grade information - colour space transforms, colour management cubes, conform metadata and keyframes – plus spatial operations that LUTs do not include, such as shapes, blur and additional grain. 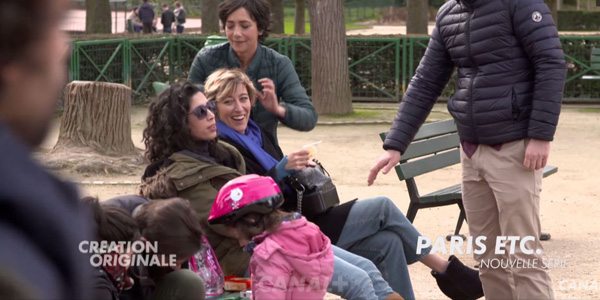 Creative decisions can be exported from Prelight as BLG files and imported directly into Baselight, Baselight Editions or FilmLight's Daylight dailies package for shot management and fast transcoding, or vice versa. You can also use them to review looks without any FilmLight hardware or software.

Nejib is not convinced that CDLs or LUTs would have been sufficient to maintain the level of consistency the series required. “A CDL is creatively too restrictive,” he said. “Antoine Roch used warm filters - Maui Brown, Classic Soft, Glimmer, Glimmer Bronze - on most of the shots. He was not just interested in getting a warm image but also in the impact those filters would have on the render of the various shades and textures of the image, after a white balance. The image he was shooting was, in fact, never intended to be viewed without a first grade.

“Prelight permitted him to visualise on-set the render of each filter in the context of a grade, and to validate the grade that would then been sent to any other other team working further down the chain, including editing.

“I used the Hue Shift operator to correct the saturation or the hue of a colour, without having to define a key or create a shape. This is a very handy tool. There were some outdoor sequences where I could work on the leaves of trees in just a few clicks - this type of correction can't be saved in a CDL.”

Prelight supports authoring with Baselight's primary and secondary grading tools, including spatial operations and relevant inside/outside mattes produced by keying. These tasks include working with unlimited layers of about a dozen different grade elements, one of which is Hue Shift. 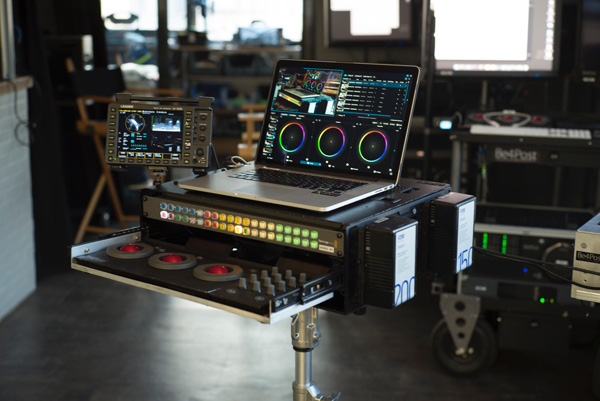 Nejib said, “Also, to be useful, the on-set grading needs to be easily modifiable in post. Not being able to change colour grading values separately in a LUT was a limitation that really wouldn't work for our objective. The only choice the colourist has is to apply a LUT - or not. No separation exists, for example, between a first layer of technical grading - white balance, exposure, contrast - and another layer of a more creative grade - hue control, saturation and so on.

“Antoine Roch wanted the work on set to be re-used as much as possible within Baselight. So even though Prelight is compatible with CDL and LUT workflows, we had to use the BLG format to avoid those limitations.”

“Le Labo gave us all the necessary colour spaces and DRT details for the project ahead of time, and we selected them in Prelight with a few clicks. Because everything was included and automatic, we didn't need LUTs. On the other hand, because each colour space gamut is different, the same grading value will have a different appearance depending on the working colour space that is selected. As a result, failing to use the same working colour space guarantees that the on-set grading can't be reused later on without extra conversion steps.” 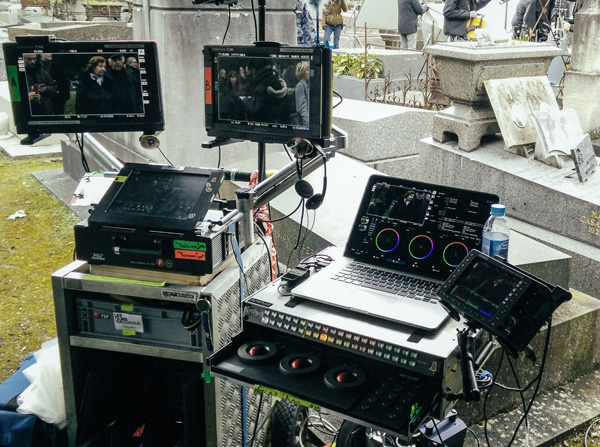 While working on set, Nejib used two different carts specialised for DIT work on set. The first had been designed specifically for live grading by the French rental facility Be4Post. Based on a 15-inch MacBook Pro, two Fujifilm IS-mini LUT boxes and a Sony SDI monitor, it runs on batteries and, despite its very light configuration, it still has the grading panel and video switchers integrated into it.

Users create and apply a prepared look or colour correction to a live camera feed so that the director and DP can visualise their creative vision together on set and communicate this vision via a CDL and/or LUT for daily to the post production facility to use in their preparations each day. Nejib was, of course, using looks in Prelight instead.

He said, “I was grading with Prelight and then discussing the grade with Antoine Roch to collect his feedback. During shooting, a look, essentially one set of grading data, was automatically saved for each shot as a BLG file, with the associated metadata. I could also enter the metadata manually when the ANC data for television was not embedded within the SDI signal and imported into Prelight.” 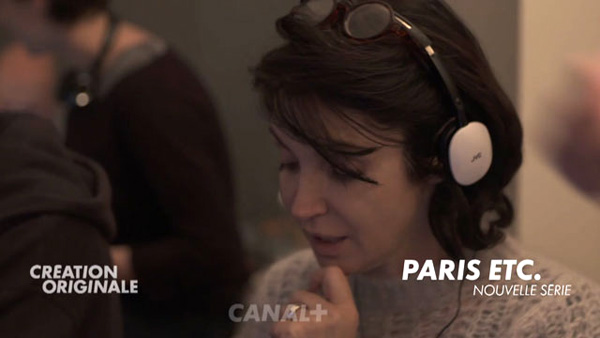 The footage was shot over 15 weeks in total. When it was over, he exported the BLG files, one per shot, onto SD cards. They also had a second, larger cart, based on a Mac Pro with two D700 GPUs. The Mac was running Daylight software with a Tangent Element control panel that gave him a lot of control over the look. This cart, built by Inovativ, also incorporated AJA connectivity and storage from Promise.

“I used this cart to import the content of the SD cards into Daylight and then applied the grade from the BLG files straight onto the shots. We used two calibrated Sony PVM A250 monitors for fidelity,” said Nejib. “I could then modify the grade, apply it to other shots and so on. That way I could check the overall grade of each sequence that had just been shot before exporting DNxHD and ALE [Avid Log Exchange] files for editing, and DNxHD, ALE, BLG and a PDF report for Le Labo.

“Due to the duration and the intensity of shooting, I had an assistant to handle the data tasks. We shot the make-up tests using this workflow, and validated the whole chain by holding a screening at Le Labo. The shoot was completed late May 2017 and the final grade started a few months later.”   www.filmlight.ltd.uk