The LEGO Batman Movie Packs a Punch with FilmLight’s Baselight

The LEGO Batman Movie Packs a Punch with FilmLight’s Baselight

Animal Logic’s colourist Sam Chynoweth and editorial and DI engineer Bram Tulloch talk about grading ‘The LEGO Batman Movie’ on FilmLight Baselight, and how they used the system for the DI, plus editing and compositing tasks to give the most recent film in the LEGO movie franchise a modern and entertaining look.

“For this all-animated feature, we acted less as post-production and more as part of the production team,” Sam said. “Where we might normally have four weeks to grade a live action movie, here we were embedded in the production process for a year. From near the beginning of the project we were working with production designer Grant Freckelton to develop looks and we essentially became an extension of the lighting, compositing and output departments rather than just waiting for finished shots to be delivered to us.”

The process began by working with Grant and the director Chris McKay to determine the exact look and feel they were after. At one stage, they veered toward a dark, gritty look, a typical ‘Batman’ style. Very early on, they also wanted to see elements of a 1970s film, which meant working out how to incorporate those while still maintain a modern feeling. 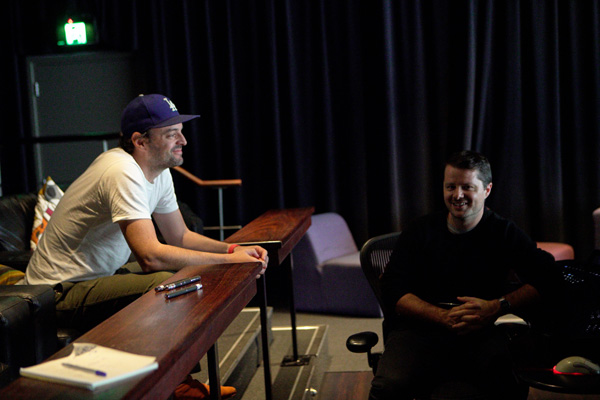 “Then we lifted it up a little to get a bit of fun happening,” said Sam. “We ended up coining the phrase ‘baby’s first apocalypse’ – dark, gritty and Gotham-like, but identifying all the bits that could be made fun, and making them fun. Anything that could be turned up, was turned up to 11.”

Sam finds that a commonly misunderstood aspect of animated features is the expectation that shots will come to the colourist already balanced. “On LEGO Batman, we had about 300 artists working on scenes throughout the movie, and shot-to-shot we might have different compositors putting in their own nuances. Consequently, quite a lot of basic balancing is still needed to bring it into line.

“From there we created many different secondaries. Working alongside production gave us the opportunity for a high level of attention to detail because we were working with heavily multi-channel EXR files, rendered and delivered to us from the VFX artists’ 3D lighting software, so we were really able to get in there and manipulate things to the nth degree.

One of the most beneficial aspects of this process is that we were taking pressure off the up-stream departments. We would take on the load so that the artists could produce more work. For every frame of the movie we received a single EXR file which had three views - the standard left and right stereo 3D channels plus, very often, a mono camera as well to maintain symmetry.”

Packed into each EXR file would also be a breakdown of mattes for characters, body parts, camera and world position, and so on. One of the most important layers they used was a surface colour pass, which gives the base, non-reflective colour of the scene. “If we found events where, for example, elements had too much reflection we could multiply that pass by the Alpha [channel] to blend it with the bas colour and bring the reflection down. It not only restored natural colour to the characters, but it also helped to control that crazy, saturated look.”

In short, they could use Baselight like a very fast compositing package to combine and take advantage of the supplied layers. Although they did not need to perform a huge amount of keying because they had all the mattes in the EXR files, they did use many shape mattes to subtly re-light scenes. It proved to be much quicker for them to accent details in this way themselves, than to send frames back to production for relighting.

The project’s DI engineer Bram Tulloch noted, “The flexibility gained from setting up the Baselight grading system on the cloud network architecture was what made it possible to work this way relatively easily. We have a Baselight TWO as our hero seat in the grading theatre, and also a Baselight ONE to do some supplementary grading and handle much of the stereo 3D work.

“We needed a massive amount of storage – the EXR images were between 50 and 150 megabytes a frame – but because we were using FilmLight’s specialised FLUX Store hardware we did not have to take special measures on our own to manage it. In fact, we worked with the same data on both on the FLUX Store and the Baselight TWO, because that gave us added security and the ability to switch between machines almost immediately if anything went down.”

FLUX Store is networked post-production storage hardware that uses a high-bandwidth internal disk system and cloud network infrastructure developed for Baselight. It can be deployed in a facility in the same way as general storage, but has a file system designed and tuned specifically for handling image streams across its 24 drives with minimal fragmentation and seeking.

On the grading side, Sam was using the generalised colour spaces in the Baselight to work on the movie in a flexible manner that contrasts with the way they have done previously. “We could switch in and out of colour spaces non-destructively, in order to pull the most out of our images. Sometimes you need a big gamut, but sometimes that big gamut starts to interfere when you are trying to fine tune the grade. We were working primarily in ACEScc with some custom tweaks, but we would switch in and out of different spaces as we needed them for different tools.”

ACEScc, the ‘colour correction’ version of the ACES colour space, is a definition that is slightly larger than the ITU Rec.2020 space and has logarithmic transfer characteristics that improve its usefulness inside colour correction and grading packages. The ability to switch between spaces meant they could stretch the colour information of the image to make it work precisely as they needed. “We could push sections while still maintaining key colours, like Batman’s eyes or Robin’s cape. Even when we were pushing our crazy apocalypse colours, we had to keep those catch colours in there so people could easily recognise the characters.” 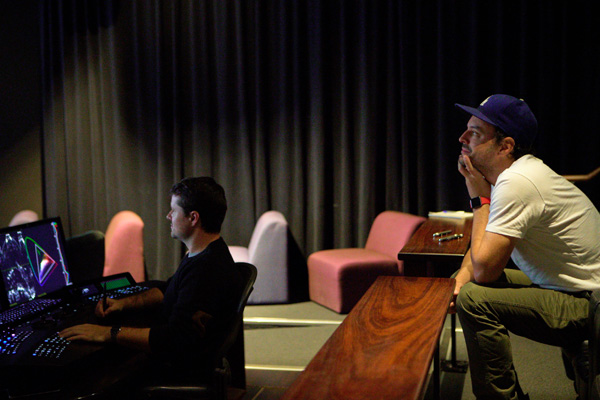 Sam especially enjoyed working on the climactic dog-fight sequence in the film, when they had a chance to make more of everything for excitement and impact. “We scaled the saturation and the dynamic range up to the maximum, but we used a lot of fast tracking for key characters. We had to closely follow a number of key elements to maintain the story, but at the same time we wanted to present a spectacle you could just sit back and watch. As a result, that was by far the most challenging sequence.”

An important output for the project was the HDR master grade. “We took the regular, standard dynamic range digital grade master over to Dolby in LA and found that it slotted very easily into their HDR environment. Some re-balancing was needed for the inherent new contrast in the HDR system, but we encountered no real surprises.

“We had done some mock HDR tests early on to make sure that we didn’t have any clamped shots or highlights that had been artificially sat down – that is, making the image darker by shifting the black level down. Once we’d set our key mid-tone, essentially skin tone, at a level which we felt looked right in the HDR scene, we could let the highlights move around as needed.”

Depending on the production, Sam believes that, if it were possible, it would be better to grade the master in HDR wide gamut and then step back down for the deliverables. Live action footage can reveal unexpected elements, such as exterior details through windows, that become visible in HDR – elements that no-one had noticed while on set.

“Therefore, it’s probably better to start in HDR where you can see those problems and make creative choices at that early stage. Then, when you come back down to a smaller dynamic range, the image and looks decisions will still hold up. Nevertheless, grading a movie on a HDR monitor is somewhat contentious because the HDR you see on a monitor is different to HDR you would see in a cinema.

Sam also favours the new Baselight 5.0 software. He said, “The Compress Gamut tool has proved to be a life-saver, particularly when we came to create the Rec. 709 pass. We were able to get all those colours from the big-screen version into the 709 deliverable with minimal compromise, but the Compress Gamut tool completely changes the way you do this. It’s quicker, and you achieve a much better representation. Given Baselight’s render speeds, we were able to generate all of our deliverables directly from Baselight.

Looking to the future, he and Bram are also enthused about a number of the other v5.0 tools, like the world-space matte function and GL shaders, which will save time and allow them to write specific tools for production. He remarked, “One of our next big projects, ‘Peter Rabbit’, is a hybrid film, and the new screen keyer and perspective tracker will also be huge for us on that. Baselight has allowed us to push the grading process right back to where we have become a key part of production, not just post.”

As well as sending DNxHDs to their Avid suites, they can plan their work to include compositing pipelines using BLGs. “Once we have matte support within the pipeline, we’ll have more effective two-way communication and will become even more a part of production than we are now, especially regarding early look development. I can certainly see that trend developing in the future."  www.filmlight.ltd.uk