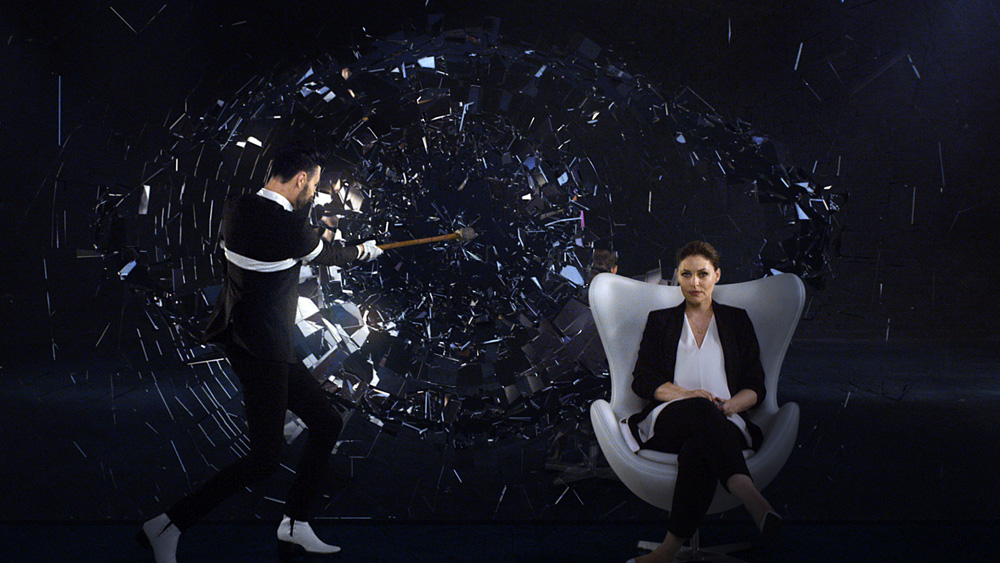 Channel 5 has partnered with Gramercy Park Studios (GPS) to create a series of VFX-driven promos for the return of reality TV show Big Brother. It stars the show’s presenters, Emma Willis and Rylan Clark-Neal, but almost every other element of the campaign was created in post production by GPS.

Viewers watch Rylan smashing a sledgehammer against an enormous mirror, shattering it to reveal the new Big Brother logo, which then also shatters. The shards of glass fly past the presenters towards the screen - and whoever is watching, creating an unsettling but engaging 3D experience.

The team at GPS handled all post production tasks from editing on-set, the offline, 2D and 3D visual effects and colour grading. GPS head of 3D Matt Lowery said, “Broadcast work is usually a lot of fun. We received the kind of brief that CG artists really love - ‘It just needs to look beautiful’.” Nevertheless, the brief wasn’t simple.

Black and White and Green Screen

The Channel 5 team had ambitious plans for the two actors in the opening shot to appear to be posing in front of the giant mirror, facing the camera. Furthermore, while the actors facing us are dressed in black, their ‘reflections’ are wearing white. Mysteriously however, after shattering the mirror, we see both actors in white. Prior to the shoot, head of 2D Mark Beardall created a technical pre-visualisation in Flame to work out the steps required on set and in post. 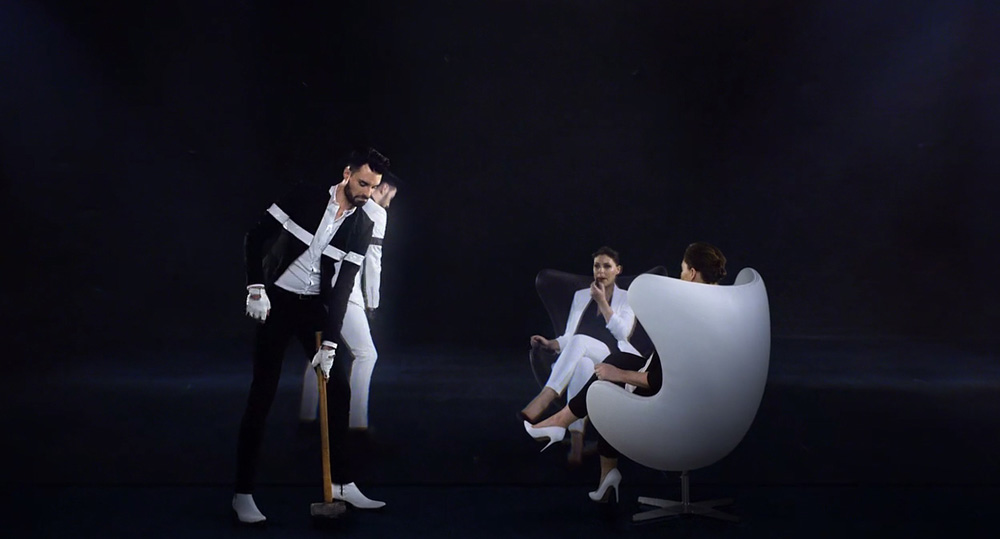 Mark said, “Using pre-viz helped us create an environment based on what we wanted to see as a finished layout. We could test out camera moves and then render frames out from the cameras that showed us what we needed to film on each setup. In the end, in fact, only one angle had to be filmed for the wide opening shot. Rylan and Emma would simply need to change positions for the different takes. We also realised that we would need something for Rylan to actually hit, to stop his swing correctly, so we placed a stand in the shot for him to aim at and strike.”

With the help of Mark’s pre-viz, the team devised a plan to get exactly the material they needed from the green screen shoot, but on-set production was complicated by the fact that Rylan and Emma weren’t available at the same time. To make sure the video would work in post, GPS’ editor Vee Pinot edited and tested the footage at the shoot.

“We had two main challenges regarding the edit on this shot, both of which we handled on set,” Vee said. “First, Emma and Rylan weren’t available at the same time and had to be shot separately. Second, since the reflection shots were also captured separately, we had to align each actor’s actions perfectly in post, in order to make the mirror effect believable. 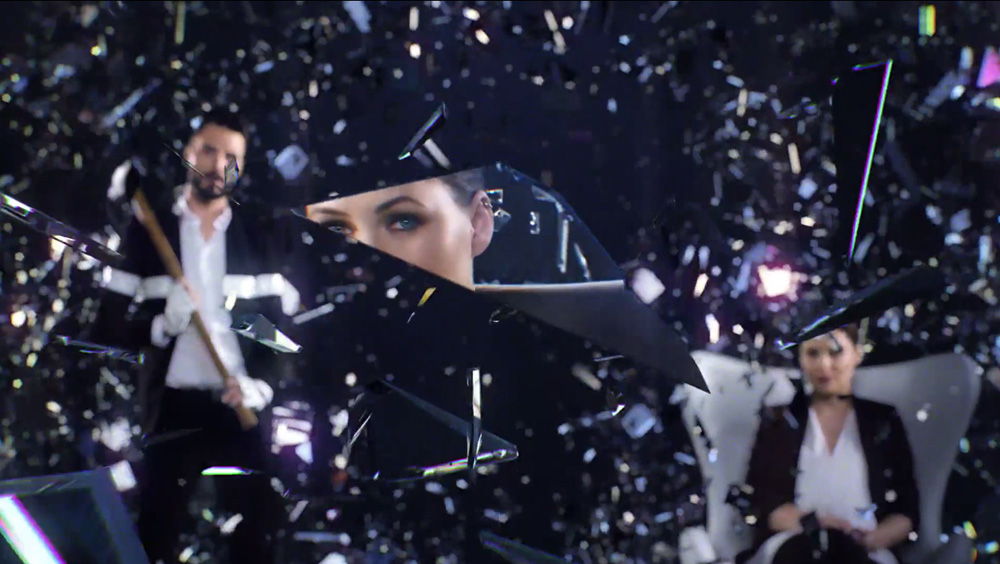 “Each pass was shot on green screen and in slow motion to allow the speed ramps as requested by the client.  The first priority was to find the best performances from the on-screen talent. Following on from this, we needed to find reflection shots to match these preferred takes. Using the green screen keyer and roughly compositing selects that seemed most promising, I could see how well the elements were working together.

“The speed ramps were added after finding the perfect matches. But, since the actors weren’t performing at exactly the same pace every time, the speed of each take had to be altered individually to work."

GPS’s 2D and 3D departments together worked out the design and looks of the flying shards of glass. Mark said, “The mirrored scene was first built in Flame, and then transforms into a CG version as the hammer impacts. To do this, the environment frames were exported from Flame to our 3D department, which they used to reflect the environment correctly in the breaking glass.” 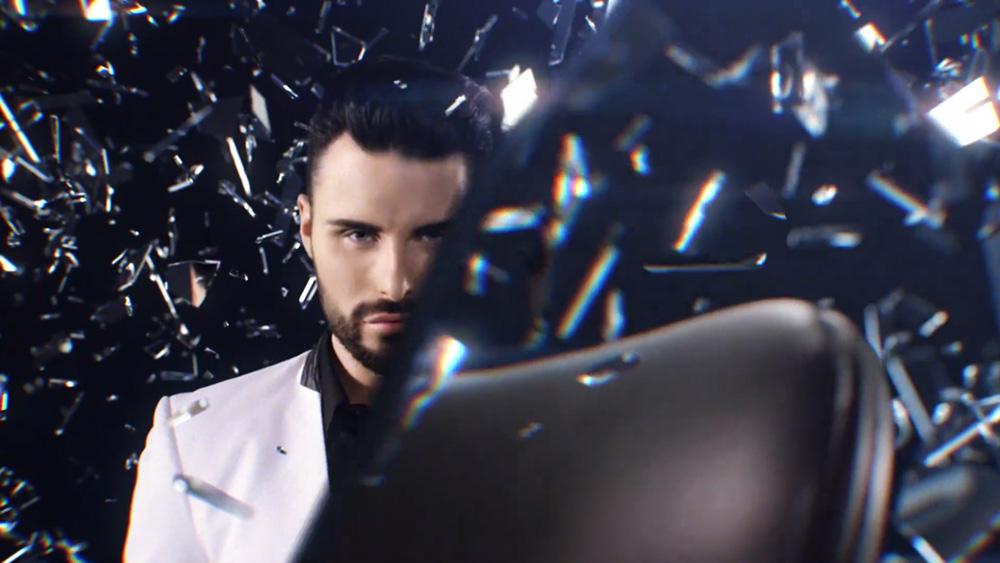 Considering the two-pronged approach they adopted for this part of the project, with 2D and 3D sharing the work load, Matt said, “Because some R&D was required to solve the shattering dynamics and simulations in 3D, we could press ahead on that front, while Mark worked up an environment that the client was happy with,” he said. “Once we had sign-off on that environment, we implemented it into our CGI scene.”

In order for the talent to reflect properly in the CG mirror, they accurately placed 2D cards of them into the 3D space. In the two mid shots, senior CG artist Mike Bonnington created a full 3D version of the talent so that the reflections accurately showed the back of the talent.

Mark also said, “Initially there were to be more details in the room, but these were dialled back to give a much more suggested atmosphere. It was created fully in 3D space, which allowed us to plot out a nice camera move. In the end the move became very simple but still benefitted from the 3D build.

Through the Looking Glass

“The trickiest part was making the transition from this environment in Flame to the CG mirror shatter. Everything up to the smash was entirely Flame. But as the smash happens, the background behind Rylan and Emma transitions to the CG renders. This meant that 3D had to take my built environment in Flame and reflect that fully including the hero reflections in their CG glass.

In the end it was relatively simple, but it did take some head-scratching to make it work! Once everything was put together, a series of glints and flares were added on top to give everything a bit more dramatic impact.

They decided that simulation would be the best option to realistically set thousands of pieces of CG geometry in motion. Fortunately, the director had already sourced some video reference for breaking glass effects that he liked, giving them a look to aim for from the start. Matt said, “We used a combination of RealFlow, Maya and Bullet dynamics to achieve the final shattering simulation of over 4,500 separate pieces of geometry.

“The action takes place in a zero gravity environment, which meant the realism started taking a back seat to beauty as soon as we turned off the gravity. From there, the driving force was to make it look nice, as opposed to faithfully true to life. Even so, although the gravity was dialled down, the collisions between all the tiny bits of glass were dealt with in a very realistic and physically accurate manner. 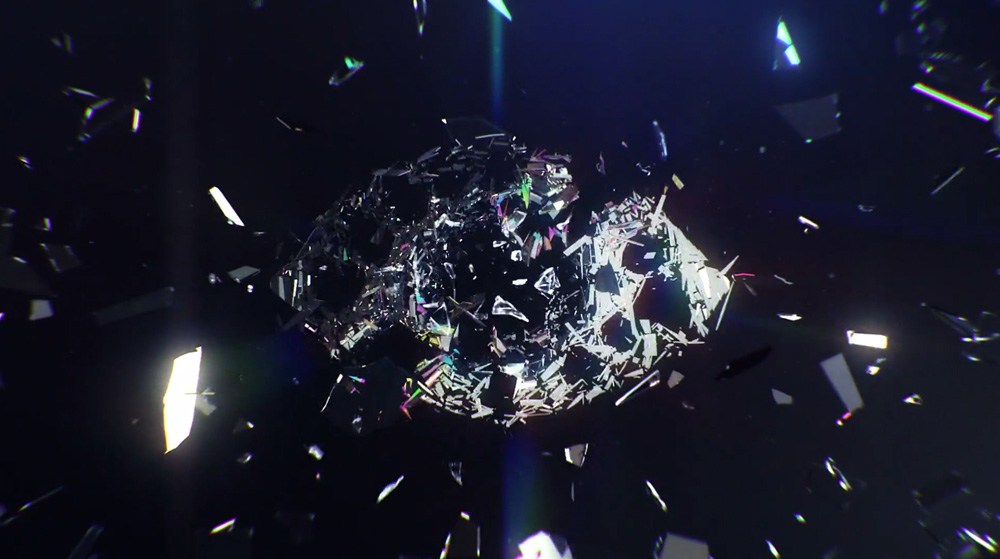 “We shattered the logo using the same techniques, taking into account the look of the newly designed Big Brother eye, and blended these elements into our final glass world. Once we had the glass and mirror shards moving how we wanted them, we added in some hand animated ‘hero’ shards, some finer glass particles, and started the lighting and rendering process.”

Matt and the 3D team at GPS then created the transitional glass shards that fly directly towards the viewers’ eyes, emphasising the 3-dimensional nature of this spot.

Matt said, “Each shot is connected through an elaborate transition shard that we hand animated and then rendered out as a separate pass for Mark to work with in Flame. Doing it this way meant that we could adjust the timing of the transitions without having to re-simulate. Mike Bonnington was responsible for developing the look of the hero glass shards, as well as the lighting and shading of the two mid shots as the camera travels past the talent.

It took some time to get them all looking right. As pieces of mirror, they decided the shards should reflect the image and only reveal at the last moment, calling for a fine balance between a reflection and a wipe reveal. “But it made sense visually to do it this way, with only a little distortion visible before the image is revealed in full,” Mark said. “The shards rendered out for us from CG had all the passes needed to be able to create the desired effect.”

The final three of these transitions introduce elements of Channel 5’s new channel branding. Because their creative director Rob Fox and his team were keen to have these shots feel like part of the bigger Channel 5 brand, extra care was taken on them.  www.gramercyparkstudios.com