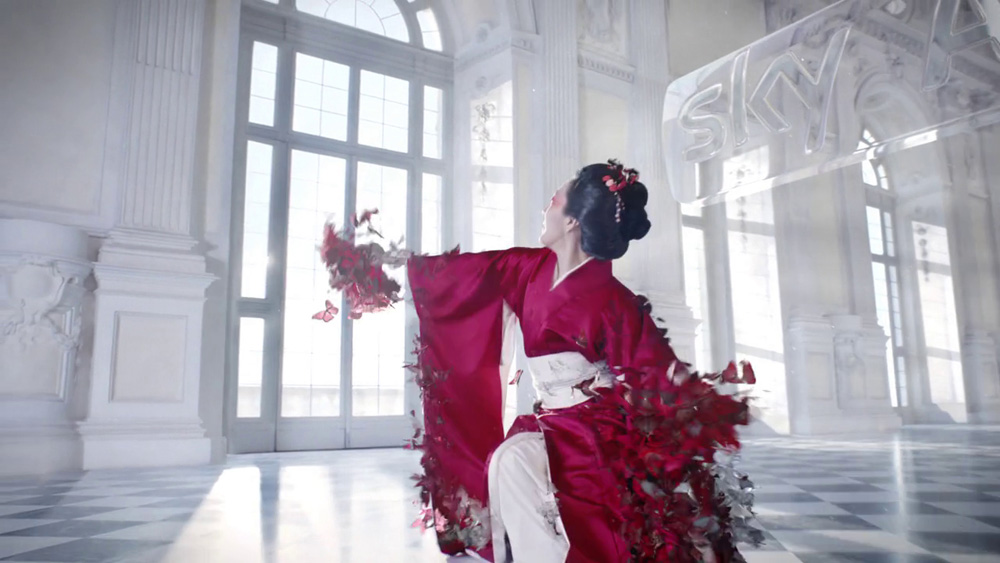 MPC recently worked with Sky on a series of three new 25sec idents as part of the channel’s Sky Arts rebrand. The concept centres on the transforming power of colour - visualising the transformation from ordinary to extraordinary through colour. Two of series, titled ‘Butterlies’ and ‘Dogs’, have been aired so far, with a third to follow.

Director Adam Wells said, “On paper, the idea was pretty simple, but we realised this creative would only succeed through a strong collaboration between the live action elements and VFX.” Each spot involved its own challenges, integrating very different uses of colour in different settings and needed an R&D stage, on-set supervision and detailed post production.

‘Butterflies’ was created using an invisible transition that transforms a graceful Japanese geisha into a swarm of fluttering Monarch butterflies, a true ‘Mme Butterfly’ performance. The live action was shot inside a beautiful white interior at the famous Kings Palace in Turin. The CG artists carefully researched Monarch butterflies and accurately modelled their butterflies on real examples. Then they altered the colours to match the new Sky Arts branding. 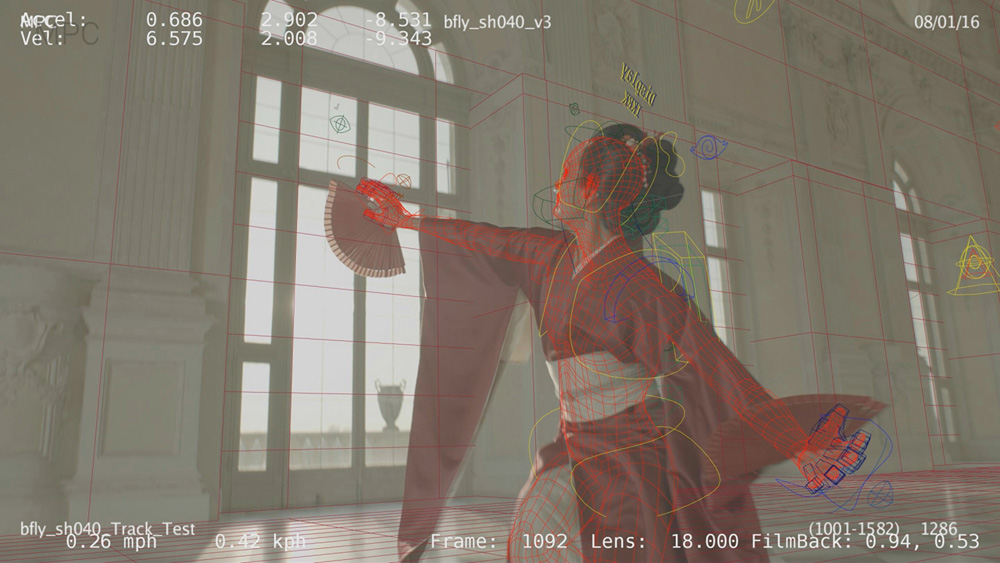 On set, the camera tracked around the actress from a low angle, against her spiraling movement. As she begins to open her arms and spread her fans, she undergoes her surprising transformation.

The swarm was created with a bespoke simulation in Houdini which was enhanced with individually animated hero butterflies.  “Our FX TD Steve Oakley created a custom flocking system in Houdini, which allowed the butterflies' starting positions to be driven by the points on the virtual Mme Butterfly. Using this system, we were then able to assign each butterfly in the flock a start time to take off from her body,” Greg said.

“Each butterfly references the same source animation for wing flapping, but that animation is varied for each individual as it goes on its journey from being part of Mme Butterfly out into the room while, for the most part, avoiding other butterflies and respecting the laws of physics.” 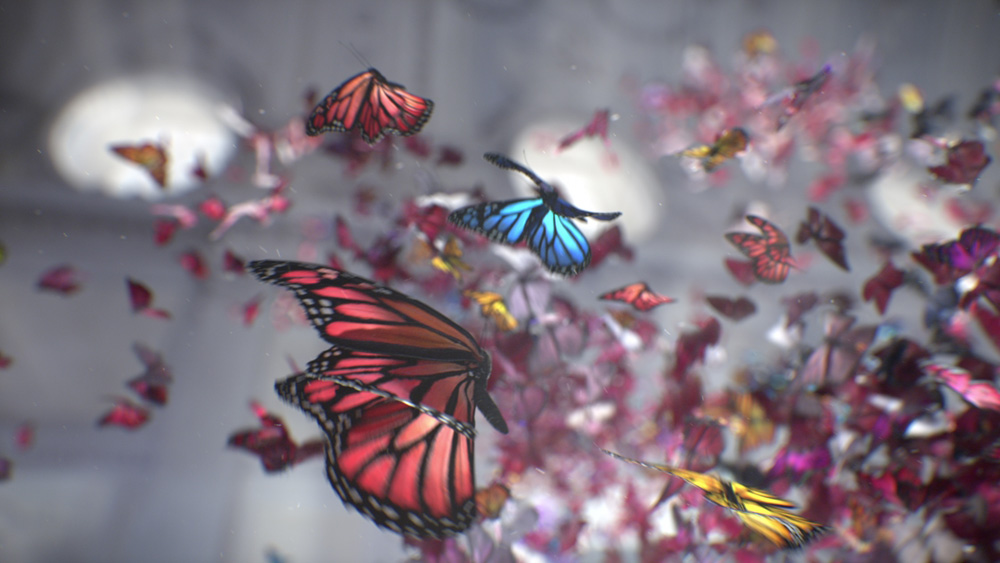 The flock was initially created to fill the form of the actress playing Mme Butterfly, but once they left her, the team had to guide the flock to create an overall movement that worked with the camera. The flocking system they built allowed the individuals to flutter about naturally, while still loosely following another system of guide particles, which were used to design the overall shape of the flock in relation to the camera.

Finding a balance between achieving the shapes and dramatic choreography they aimed for, and maintaining a naturalistic flow and rhythm for the flock, proved to be one of the greatest challenges of the project.

It was important to make visual connections between the Mme Butterfly character, the individual butterflies and the swarm. “Each butterfly begins its 'life' taking the colour from the part of her costume or skin where it begins its journey. The butterflies then transition into full colour over the course of the animation,” said Greg. 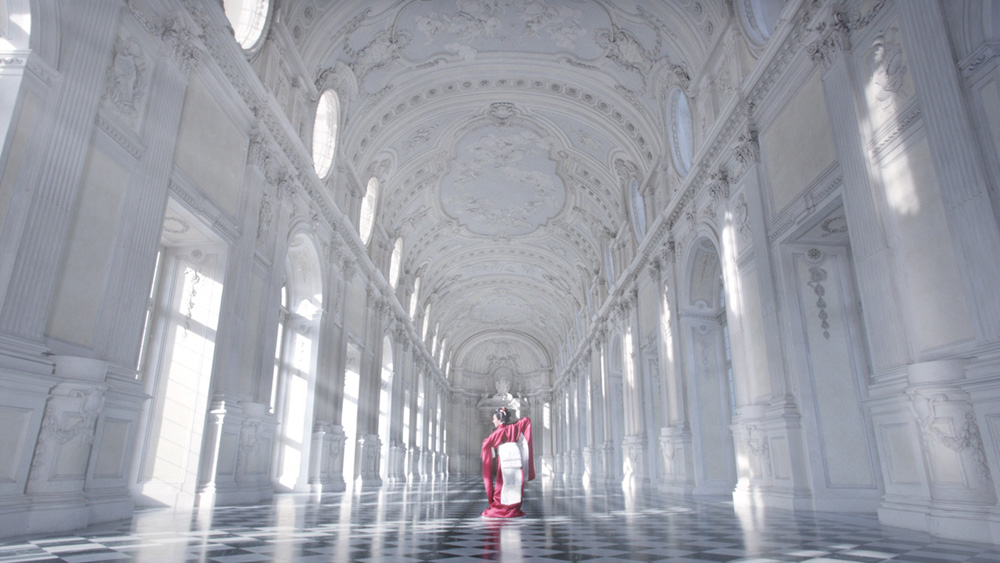 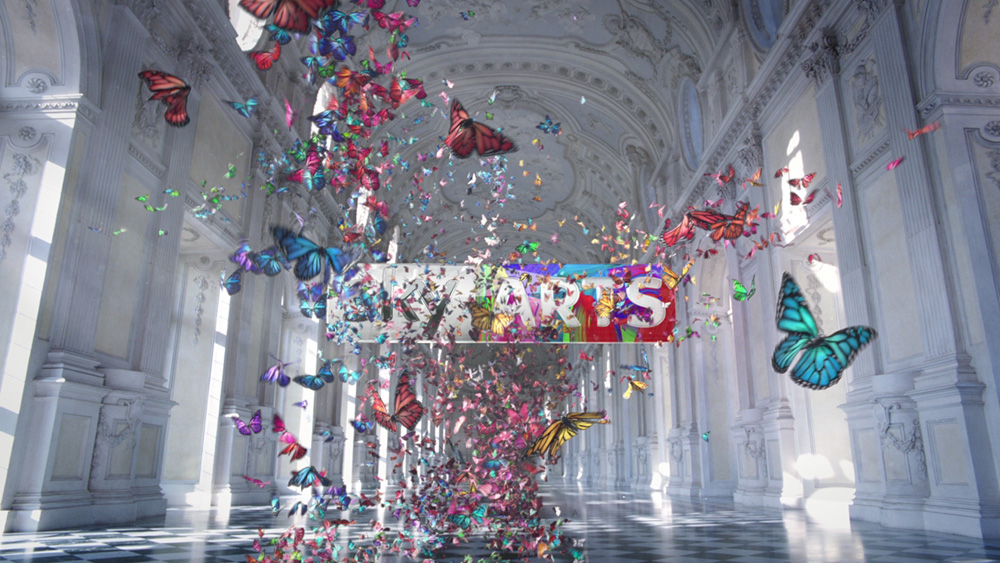 Lighting such a large group of tiny creatures in a vast space was a tricky challenge. The butterflies had to look good both extremely close and very far from camera, and the whole scene had to work together as an overall composition. Greg noted, “Butterfly wings react to light in a very particular way, having both translucent and reflective properties, and we did a lot of research to try to match this as closely as possible. But we then had to expand on this to bring the vibrant colour palette of the Sky Arts logo into the kaleidoscope of butterflies.”

A practical approach was using neutral colours for the butterflies to judge the lighting and then reintroduce the variety of colours once the lighting was working well. In the final shot, about 25 to 30 of the foreground butterflies were hand animated and given individual attention in lighting to bring out detail in the wings. The volumetric light beams and dust were added in 3D and compositing to enhance the depth of the space and to create pools of light for the butterflies to fly through.

The second ident, ‘Dogs’, shows a Dalmatian shaking off his spots, which turn into drops of bright coloured paint that splat against the white walls around him. To do this, the production and MPC’s team combined clever shooting techniques and complex visual effects. Greg said, “For each spot in this series, the challenge from Sky Creative and director Adam Wells was to invent a way of creating something impossible and to depict it in a believable way.”

In this case, the result is also very fun to watch. The dog, called Chance, was shot in a pure white set build and, while the production was busy filming the shaking performance, the CG team was busy building a white, digital replica to replace him with. This allows the audience to see a clean white dog when the CG spots animate and fly off of him.

The paint was a combination of live action 2D elements and CG simulations, blended indistinguishably and used to populate the white space with as much control and direction as possible. They needed each frame to feel like it was made up of consistent elements that were all happening in the same space, in order for viewers to believe the magic of the effect. In the wide shots, we see a blend of CG and actual live action paint, but the majority of the paint in the final shots was created in CG.

“This method gave us the most control over the timing, placement and colour of each splash, as well as the ability to transition to a splash from one of the dog's spots in 3D,” Greg said. “The live action paint was enormously useful as elements for close-ups and as reference for the behaviour and speed of the splashes for the wide shots.”

The shoot required a lot of advance planning. 2D supervisor Marcus Dryden said, “After pre production, we could see that the main challenges were going to be removing the spots from the dog, and integrating the individual CG paint elements and the VFX – that is, splashing-paint simulations.” 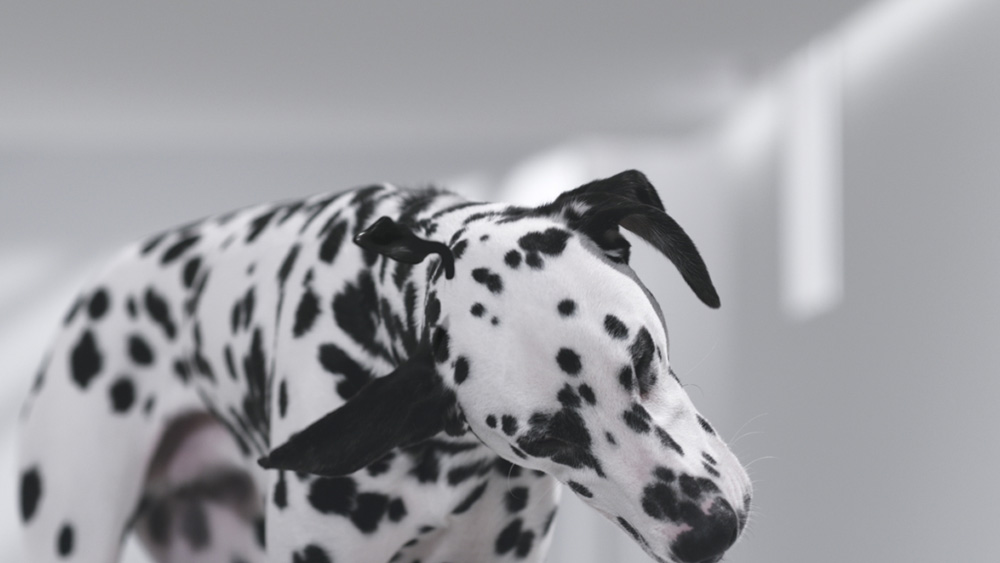 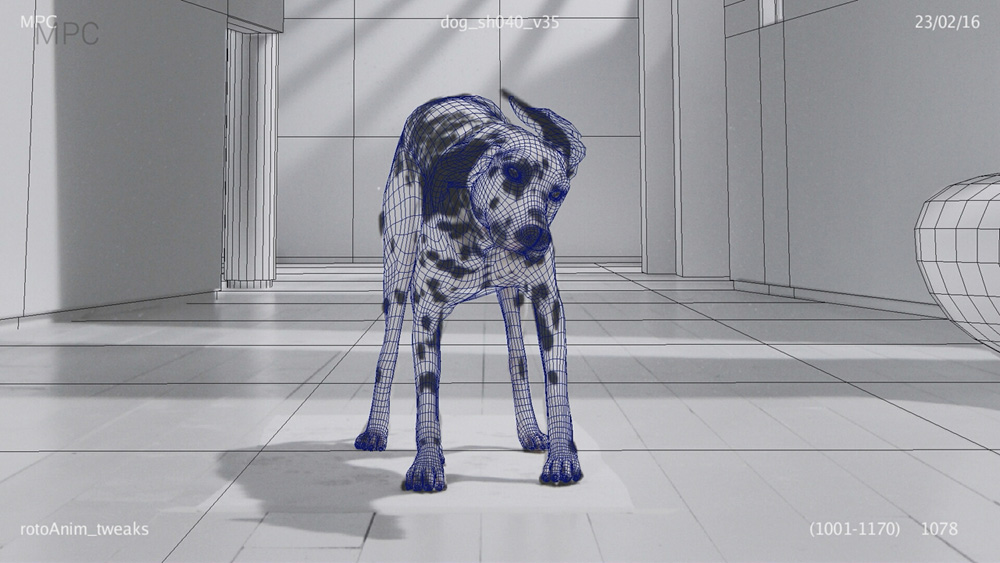 Their initial tests showed they would have to lean heavily on CG paint for the first shot, where the paint transforms from the dog, but use effects on the later shots. Therefore, in order to combine CG and FX paint invisibly, they shot quantities of 2D reference on set with Machine Shop’s special effects team from a point roughly where the dog would be shaking. Various methods were used to propel the paint, and they played with consistency and volume to generate lots of variables to work with.

“We also did both single and multi colour throws to give us some natural paint interaction. As we were throwing paint onto the 'live' set, we had to stagger the throws so we could separate them later and isolate colours. Then back at the studio, we created a library of 2D elements for the team of compositors to use, and for the FX TDs to use as reference for the paint simulations,” Marcus said.

“Our method for removing the dog’s spots started with tests of removing spots from a spotty dog, or adding spots to an all white dog. Both proved challenging, and because the reference was a Dalmatian, we took the more intricate route. We filmed our live action dog Chance at high speed and from various angles to capture his movement, then roto-animated him with our CG digital double.”

From previous experience they knew that different actions would look better at different speeds. The dog was shot between 500fps and 600fps and the paint between 200fps and 600fps. Therefore they could mix and match the frame rates in the comp to get the best visual result. Because the paint and the dog were shot separately, when they combined them, they adjusted the speeds to create the best image to tell the story. “So you could read the paint leaving the dog, and the paint hitting the wall to transform the space into the 'artwork' that we see at the end,” said Marcus. 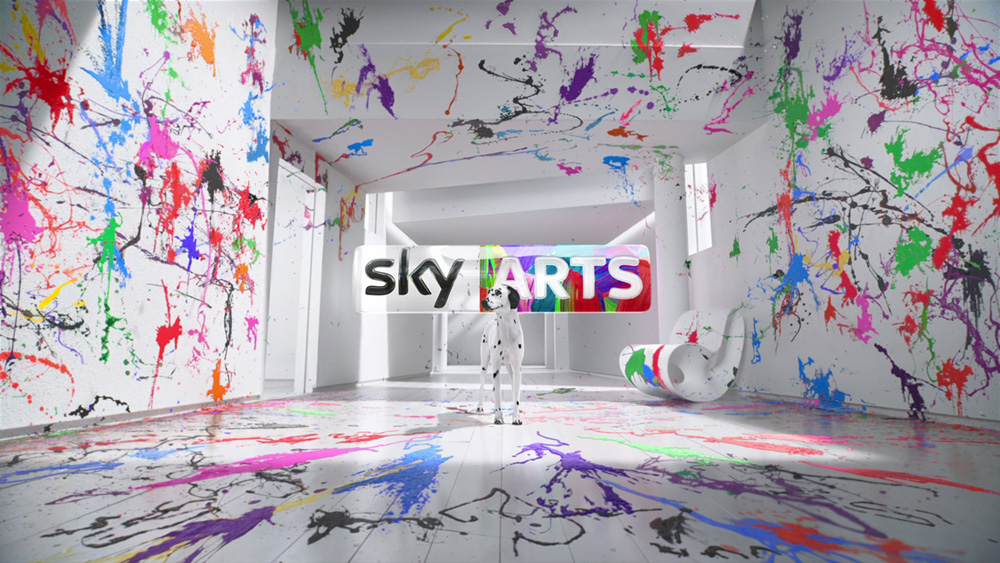 Building the 3D dog needed special photography as well. To be able to re-build Chance accurately enough, they took detailed reference photographs and measurements, and used photogrammetric imagery to build up a rough guide model. From there, a detailed model was created in Maya, and textured in MARI. Greg said, “The rig featured some cool controls allowing us to add skin-sliding to match the amazingly complex movement of the dog's skin as it shook in extreme slow motion. The fur was created using our in-house tool Furtility, and the final images were rendered in Maya and Arnold.”

For the CG paint splashes, they needed to create a customised fluid system in Houdini to accurately simulate the surface tension and sheeting behaviours exhibited by paint. Building on that, they needed to create a way of organically transitioning from spots to splashes. Each wave of spots flying off the dog was timed to match the high-speed motion of the dog, and finessed to create the best impact on the walls.

“The lighting in this piece, and the other films, reflects the overall design idea of the Sky Arts re-brand - brilliant colours set against a bright, neutral background,” said Greg. “The sets and locations were chosen with this in mind, and this was enhanced in the final grade. Nevertheless, we did have to make some subtle changes such as adding more shade and gradients to the dog and the environment to enable our white dog to stand out against the white walls.”  www.moving-picture.com