FuseFX Turns the Tide of Revolution for ‘TURN’

FuseFX Turns the Tide of Revolution for ‘TURN’ 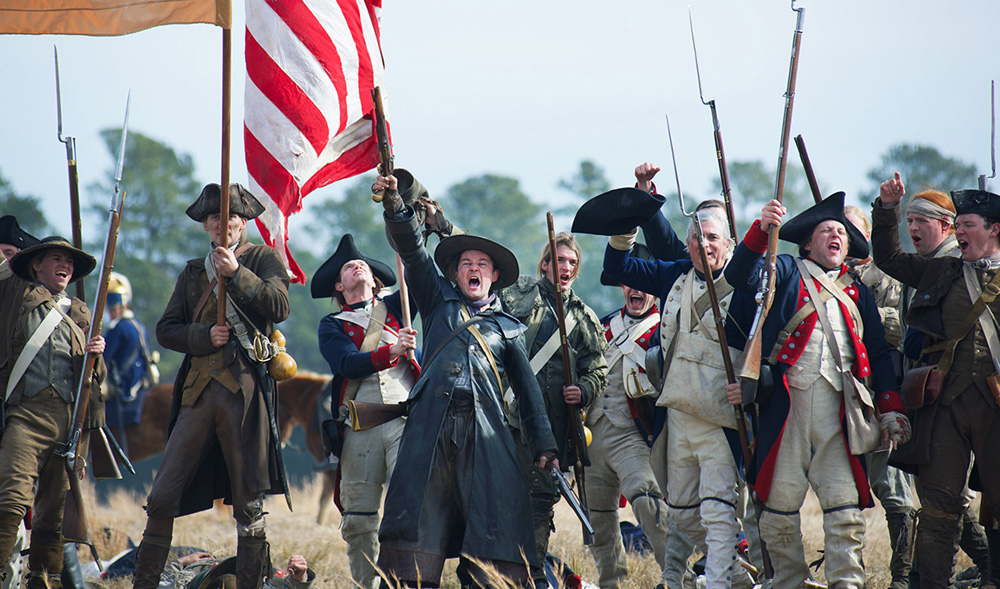 FuseFX is responsible for the realistic and historically accurate visual effects in AMC channel’s American Revolutionary War drama ‘Turn: Washington’s Spies’. Their work helps transport viewers back to the cities, villages, plantations and battlefields of colonial America, making sure that all locations, buildings and geography are correctly represented, and that the ships, flags and musket shots match the era.

Now into its third season, which premiered at the end of April 2016, ‘Turn’ is based on Alexander Rose’s book ‘Washington's Spies: The Story of America's First Spy Ring’ about a group of local espionage agents based in the small town of Setauket, New York, who help turn the tide of the war.

The show is shot on location, using the historic towns of Williamsburg, Virginia to stand in for Philadelphia and Petersburg, Virginia for New York in the colonial days. Setauket scenes are shot on a location-built set. Much of the team’s VFX work involves creating set extensions, matte paintings, water and other elements to add details making the real-world locations conform to the historic sites. Modern elements, like wires and telephone poles, captured in the production footage must be removed, and musket smoke and blood wounds added that can’t be shot in camera.

“Our job is to create elements and assets that are either too expensive or too large to build,” said production visual effects supervisor Terry Windell. “We aim for feature film quality in the visual effects, but we are working with deadlines and budgets that are not what you get on a feature, so we have to be efficient and smart. The work FuseFX has been able to accomplish on a television time-frame is amazing. Their matte paintings and recreation of historic buildings and ships add production value. Across the production, everyone who works on this show is top notch. The quality of the writing sets the tone and inspires us to do great things.” 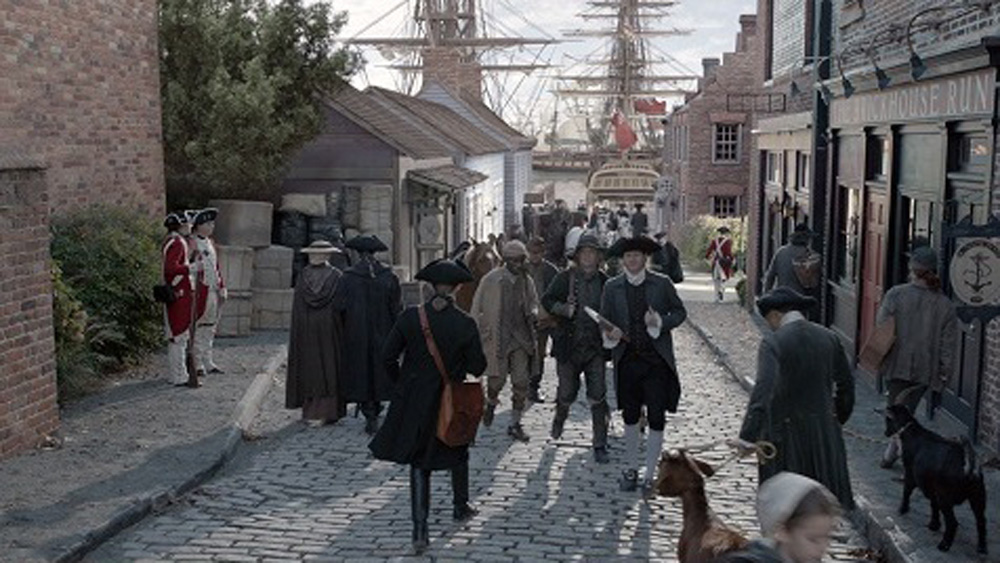 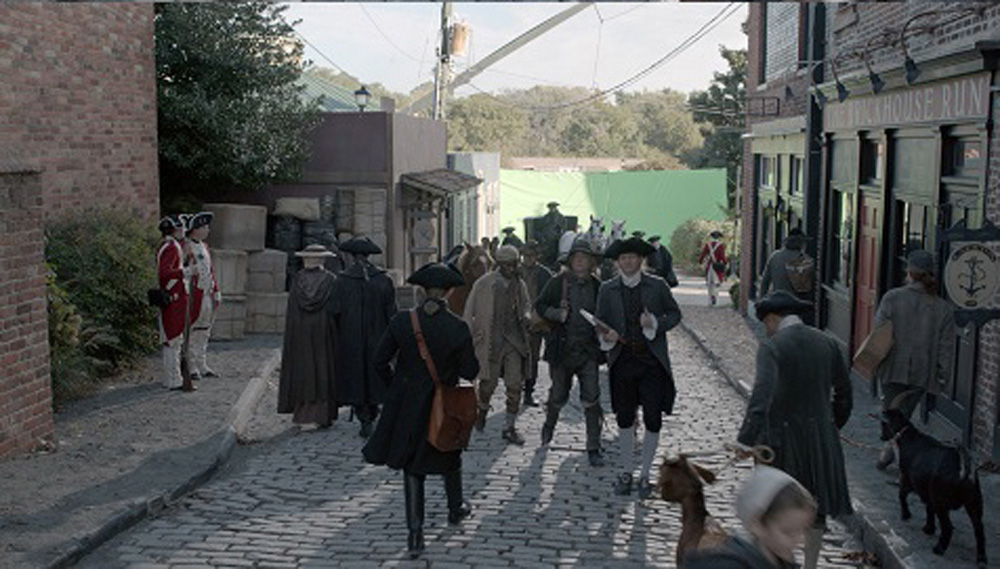 According to FuseFX VFX supervisor Jon Massey, the two most important sources of reference for the artists to have from the physical sets and locations are high resolution photos – either images shot by Terry Windell who is working on set, or photography shot at the same locations for other projects - and HDR 360° panoramas for image based lighting. “We use the photos of the set for texture references and for duplicating elements for the shot,” he said.

“Sometimes, the set is integrated into period buildings existing at the location. For example at Williamsburg, the location used for Philadelphia, many of the photos taken were of the non-set elements but we still needed many of those elements for designing set extensions and matte painting elements. We need tracking markers for some scenes but most of the time we have been able to obtain tracking data from the shot.

“Terry has been working with the cinematographer Martin V Rush as well, not for only the main shoot but also for the element shoots so that we could be sure to get what we needed for each shot. Mostly this has related to lighting and angle so that we were getting only what we needed in frame and avoiding seeing too much off of the set.”

The success of FuseFX’s effects depends on the team’s research and skills in digital matte painting, invisible compositing and CG, and on collaboration with the production – in particular with production designer Caroline Hanania and the DP, as well as Terry Windell. 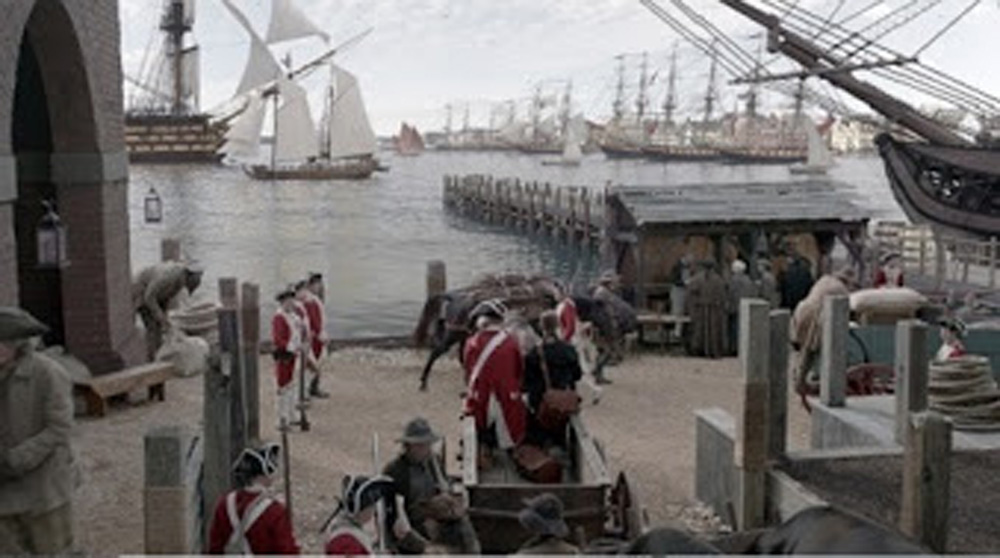 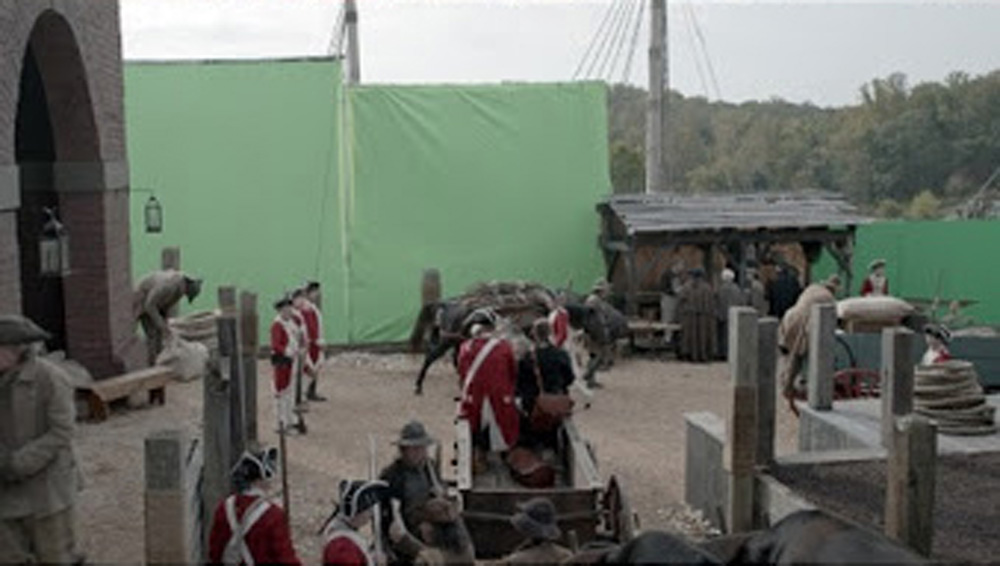 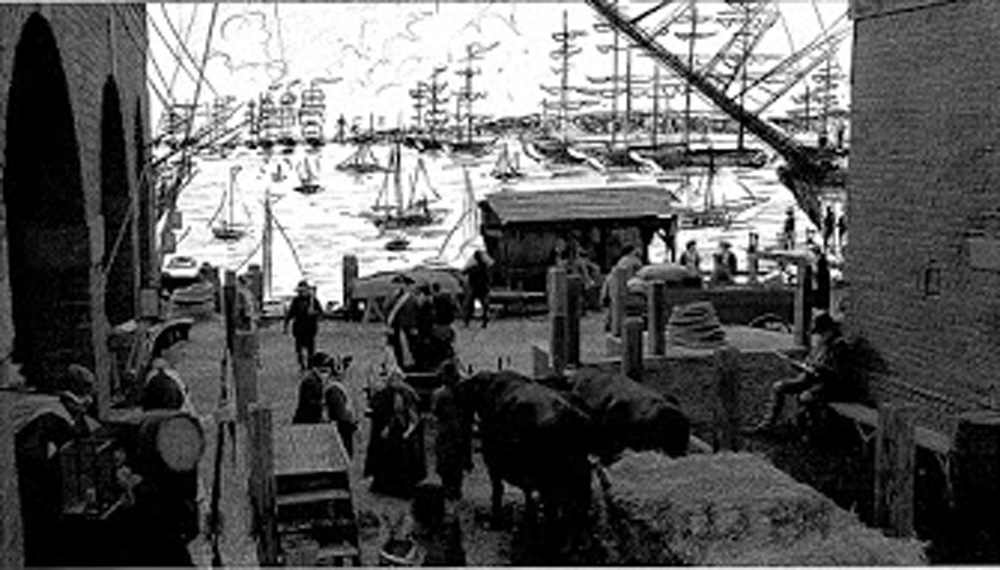 Caroline’s extensive research, set designs and drawings serve as the starting point for the set extensions and matte paintings, before the team conducts further research of their own. “Many of our building references come from photos of Dutch buildings that used to be in New York,” said Jon. “Since nearly all of those are gone, we look at European buildings from that same time period, for instance from the Dutch Quarter of Potsdam, Germany."

The VFX team has adopted an almost fanatical devotion to historical accuracy. “A mistake will be noticed,” Jon said. “There are websites dedicated to research on the show and a lot of history buffs who watch it. Production invests considerable effort into getting the details right. While I’d say most audience members aren’t really sure what New York City looked like in the 18th century because so much of it has changed, Philadelphia has so much architecture that is still standing and still in use that any contrast is more apparent.  It was the largest city of that time. In one shot last season we intentionally mashed up the city in the distance so that you could see more of it and get the feeling you were in an urban centre.”

The matte paintings they built to turn Williamsburg into colonial Philadelphia and Petersburg into New York include assets representing well-known structures such as Independence Hall and Trinity Church. Many of the historical buildings were recreated as digital matte paintings, like the Dutch buildings and Federal Building in New York. A primary challenge was simply to fill up the scenes enough to give viewers a sense of where they were, but not draw their eyes away from the main action of the story on the set. 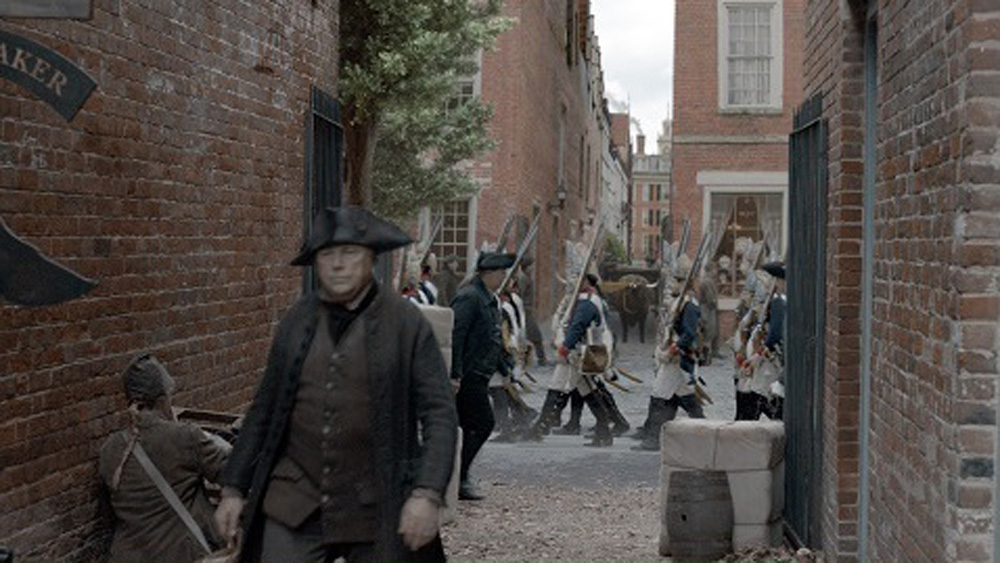 Jon said, “We either used parts of stock images of existing architecture in the US or Europe, or modelled in CG buildings to match, on a per-shot basis. In moving shots, the foreground or mid ground buildings are usually CG and the background is a matte painting.

“All of the background matte paintings were 2D, of course. For the foreground and mid-ground we used a combination of 3D buildings and 2.5D projections, depending on how much we see. Detais really depended on how close they were to the camera. Most of the close shots are practical set pieces that we then augmented for the wide shots, and many of the establishing shots in New York City and Philadelphia are actually big crane shots.” 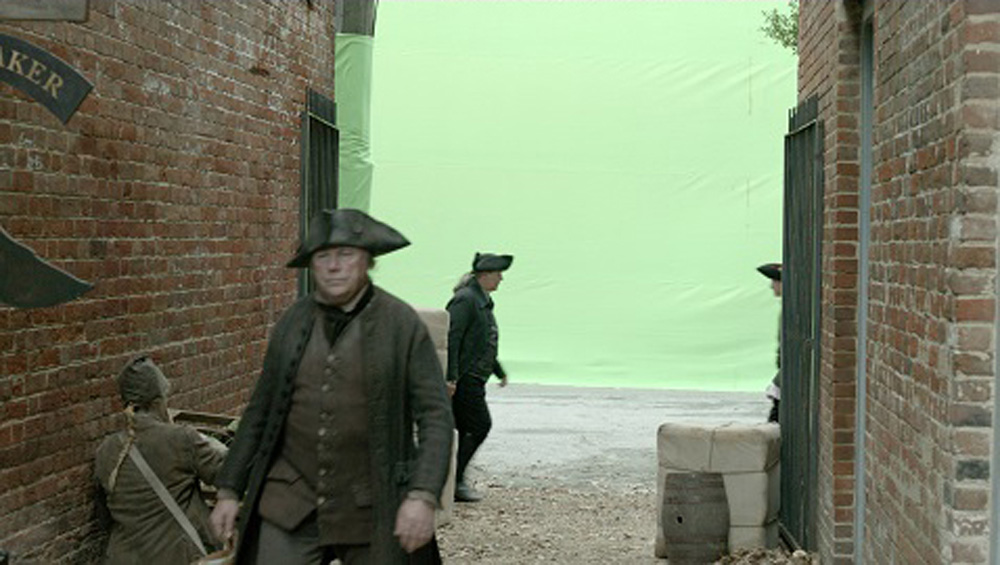 Creating CG ships needs especially detailed research. “The HMS Victory, Admiral Nelson’s flagship, which dates from the same era, still exists in England and so we’ve had access to a lot of valuable reference related to it,” Jon said. “We also need to make sure the ships fly the correct flags. The British Navy in North America at that time used the Red Ensign, where the Union Jack appears in an upper corner against a red field. It was the precursor to the flag of the United States."

One of the biggest challenges for the VFX team is water. Setauket is a harbour town on the Atlantic, but the set representing it is located inland. Waterfront views therefore need to be added to most exteriors. Jon remarked that ten years ago, creating CG water wouldn’t have been feasible within the schedule and budget of a typical episodic television show. Such effects can be time-consuming to produce, but FuseFX has developed their own hybrid approach combining CG and practical elements to shorten the development cycle. Terry Windell also remarked that one reason the production chose to work with FuseFX was because of their ability to create water effects.

“Most of the water effects we produce in ‘Turn’ are used more as visual elements than active, animated FX. Examples are the bay in Setauket, the water up against the pier and the Hudson River outside New York. So it is more about getting the look right as opposed to getting the action or splashes correct. Most of this water is CG so that we can light it to the scene and give the compositors a single element. Some shots require taking 2D shot elements and mixing them in for element interactions or maybe seeing a whitecap or two."

The live interactions with the water, such as shots of the characters climbing into rowboats or a scene with a Turtle submersible from the previous season, created a special challenge. For these situations, practical elements are indispensable. A practical rowboat in a tub of water was used to reproduce some of these actions, which FuseFX photographed and then combined with CG water or blended into several of the Setauket pier shots.

"We create a few simulations for small interactivity, around the pier, wakes of the boats and so on, but most of our water is off-the-shelf and out-of-the-box – what is important is knowing how to manipulate the software to give you the right lighting and the right amount of scale," Jon said.

“You can get 80 per cent of the way there using the tools we have at FuseFX,” he said. “But it’s the last 20 per cent, when you are fine-tuning and integrating practical waves, foam and swells, that takes the most care and effort. This part of the job is almost always in compositing. But we have found that many times CG can produce calm bodies of water that look great right out of the render and may just need a little bit of colour enhancement and integration around the edges.”

Nevertheless, if FuseFX’s hard work goes unnoticed by viewers, Terry Windell will be satisfied. “I find it incredibly fulfilling to work on a period piece where the job is not to be seen,” he said. “If viewers accept what they see as reality, that’s the highest compliment."  fusefx.com