Pixomondo Opens a VFX Window on the World of ‘Goliath’ S4

Pixomondo first started working on the Amazon Prime TV series ‘Goliath’ toward the end of Season 2, and then became primary vendor on Season 3. That series had featured an agricultural setting and was based in central California, but the finale Season 4 moves to the darker side of life in San Francisco as the protagonist lawyer Billy McBride battles through a case against the opioid industry.

As the story is based on real places in San Francisco, the production had intended to shoot much of the action on location and, before the pandemic, the film crew had captured lots of establishing plates. But when restrictions took hold, the production needed to return to the studio’s sound stages for the live action. Thus, a major part of Pixomondo’s work centred on recreating that Bay Area world.

The show’s overall VFX Supervisor and Second Unit Director, Pixomondo's Michael Shelton, talks here about his approach to putting the scenes together coherently and authentically, despite the interruption. “My decisions always took the show’s cinematography into consideration, working on the idea that the camera work and the environments were going to be critical factors in telling the story,” he said. “I also went back to San Francisco several times on my own to scan locations, create previs and prepare feasibility studies for staging the story. As much as any other task on a project like ‘Goliath’, I find it really valuable to design my own previs and carefully plan the composition of the VFX shots.

“The large amount of architectural work the show needed, interiors and exteriors, made scanning and photo reference even more important than it usually is for the team in post. I used a Faro scanner.” These scanners are regularly used to capture the measurements of large buildings, crash scenes and so on because they create accurate, complete, photorealistic 3D representations of an environment, very rapidly. Michael also wanted his reference photography to work well with the principle photography. Since the production’s A camera was a Sony VENICE, he fitted his own camera with the same chip and matched the lenses.

He ended up making a number of scanning and research trips to San Francisco, spending three or four days each time as the local weather sometimes interfered. He especially captured scans of the Chinatown neighbourhood which is dense and crowded with small buildings. “Because of the importance of those locations, the production had built a beautiful set on a sound stage for the Chinatown sequences,” Michael said. “That set, combined with digital elements based on the scans and photography and 360 plates for the backgrounds, meant we could put together very authentic looking shots.”

Michael described how his working relationship with the DP assigned to Season 4 of ‘Goliath’, Jeffrey Greeley, was a major influence on Pixomondo’s work. He said, “We established a connection early on. Jeff was generous about sharing the details of the approach he was using on the project and that helped us emulate it on the re-created scenes.”

That was a good thing because the shots varied widely. A shot showing two of the lead characters in conversation walking along a pier involved a huge amount of location reconstruction. It was actually shot in an empty car park at the Magic Mountain theme park on a windy day in full sun, but not close to any water. Pixomondo changed the ground they walked on to a working pier, with sheds behind them and low hills across the water – also created by the team – in front of them. When the camera angle changed they adjusted the camera effects on the digital elements to match.

Fortunately, on the pier shot, camera motion was minimal, but on other shots camera moves could be an issue. The best way to deal with them in post was to be prepared – this was the main reason that thorough scanning and lots of photography on location was important.

The showrunner Lawrence Trilling entrusted Pixomondo with a large element of the show’s look, including shot design. For example, in a dream, on the TV set in a local bar, Billy can see his young daughter jump from the Golden Gate Bridge, and the emotional jolt causes him to wake up.

“It seemed at first that this shot would have to be a compromise. It’s more or less impossible to take a film crew onto the bridge to shoot any action. The production had originally thought of shooting the actress standing on the bridge with a long lens but I wasn’t convinced that this would have the necessary emotional impact, or give them much freedom in the camera work.” 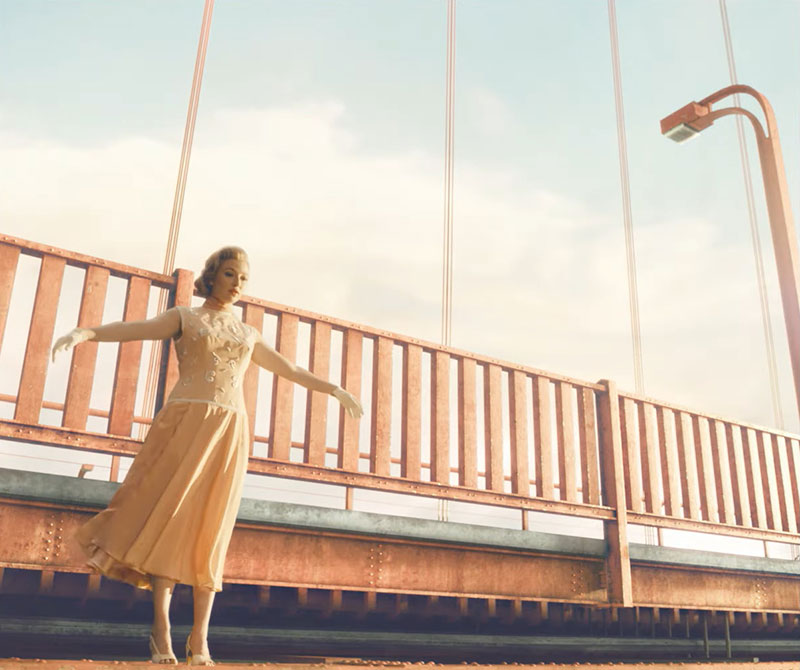 So Michael took a number of shots to previs the sequence playing out in a different way that he showed to the Lawrence. It required re-writing the shoot plan somewhat – shooting the actress on green screen, putting together the shot plates and CG elements of the bridge sky, water and so on in a particular way. The result reflects the cinematography of the rest of the show as well as the creative intent of the production.

A sequence in which the camera appears to closely follow a cable car that Billy steps onto required a partial build of the car, building the rest of it in CG, and rebuilding the street based on Michael’s scans. The street build was handled section by section as the car moves down the street. For the more distant backgrounds, he had shot 360 plates.

He said, “A scene of the main character looking out at the Bay Bridge during a night sequence needed a background of the city with a particular feeling to it. Being able to tap into Jeff’s style helped me out when I chose the lenses. I worked on the scene with a Cooke lens and lenses from Panavision, and I felt I was really pushing my ability as a photographer. It was exciting to be able to contribute to the show’s aesthetic in this way but I’m also aware that I couldn’t really have set up the shoot to look the way it does in the end. There was a large element of being in the right place at the right time, and having the right lenses in my camera.”

It is experiences like this that leave Michael uncertain about the place of virtual production and how far it can take narrative productions like ‘Goliath’ with an expressive, varied cinematic style, at least at this stage. He said, “Its value is clear – Pixomondo itself operates a state-of-the-art virtual production facility – but I believe that so much of the beauty and magic of cinematography is owed to serendipity and what the DP makes of the time and place the crew is working in. It’s about using light as it exists. Similarly, the composition is always going to be about how you pull everything together from what you see through your lens at a given moment. That is the ultimate test of your skill as a cinematic storyteller.”   www.pixomondo.com