Mark Toia has been working as a DP and filmmaker for over 25 years, shooting high-profile advertising campaigns for clients all over the world. In that time he has taken advantage of the rigorous nature of his projects to widen the scope of his expertise from cameras and shooting on set, to include pre-production, directing and post.

He has also written and produced a science fiction film called ‘Monsters of Man’, released shortly before Christmas in 2020 on OTT channels, that features a fleet of complex, photoreal robots cut loose in the Southeast Asian jungle. He financed it himself for under US $2 million.

His approach to the project was largely experimental and began with a question – with his experience and knowledge of filmmaking, could he produce a film with studio quality effects and high production values on an extremely lean budget? The answer to this question came down, in almost every respect, to his experience in commercial work. 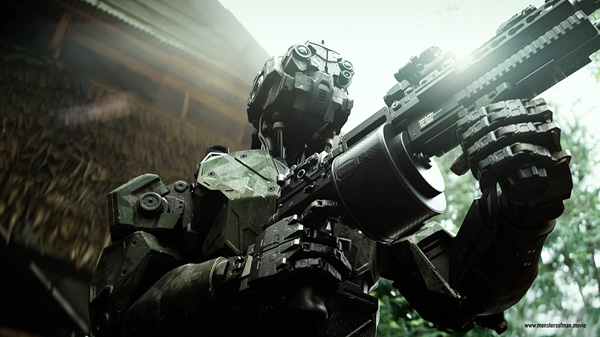 “The advertising industry forces you to be innovative,” he said. “You end up having to do things in unconventional ways to be able to create high-quality content within limited budgets and tight deadlines. My whole career has been about finding the best, fastest, most creative responses to requests that seem impossible.”

He has taught himself to use a range of NLE software, most 2D compositing applications and as many 3D packages as possible, which means he is capable of delivering content that would normally call for much greater expense. However, over time, he has found that knowing how to edit and grade contributes to the shoot and script.

Furrthermore, taking a step behind the software interface, he has also had to learn how to achieve the best performance from computer hardware, and where he could and could not cut corners. He has to consider such questions as, how can we make sure our software is accessing all of the computer’s processing power? How do we monitor stability, speed and performance to avoid delays?

Back in Brisbane, Mark looks over the shots with VFX supervisor Raoul Teague.

With this collective expertise backing him up, Mark was in a good position to take on numerous roles for ‘Monsters of Man’. Ahead of production, he served as the original concept writer and screenplay co-writer and then, as production got underway, worked as director, producer and DP. Later on he was also the editor and post manager, and worked on compositing alongside his VFX supervisor, Raoul Teague.

On one hand, ‘Monsters of Man’ was an effects-heavy production, containing over 2,000 VFX shots, 600 of which feature the story’s CG robots, highly articulated and ruthless. On the other hand, he was able to choose Cambodia as the shoot location, giving him just the look he wanted for the backgrounds, in-camera. Such a location may have daunted other directors but, having worked on projects there before, he knew how to go about hiring local crew and kit, and knew that costs in Cambodia would be low.

Trying to recreate the look of the jungle, digitally or practically, anywhere else would have been much more expensive, Australia included. While certain shots would need environmental CG work in post, he was confident that in those cases, backgrounds could be tracked in without much expense or difficulty.

The project was shot on four RED cameras at 6K and 8K resolution. “At the time of shooting our film, three RED Dragon cameras were available and I also had a prototype production Helium 8K camera that Jarred Land, president of RED, had sent us for the film. We shot with Super 35 sensors, 6K and 8K. We had already been using RED cameras for our higher-value commercials for some years because the capabilities of its codec give a producer lots of options to manipulate, correct and grade the image in post. From my point of view, the more information I have to play with, the better, including better dynamic range for grading. The RAW R3D files would give us a lot of latitude and resolution to reframe as well as lots of information to motion track our 3D robots into each shot.

“We chose Canon ZOOMs and stills lenses, mainly because we wanted short throw lenses for the operators, as they were pulling focus for us as well. They were also cheaper and more replaceable. We were working in mud and rain in very rough locations and I didn’t want to comprise on angles that would have made us worry about losing an expensive cinema lens. Optically, these lenses resolved very well at 4K, the resolution at which we finally finished the film.”

Shooting in REDCODE RAW at 11:1 compression, they had brought ten 500GB RED MINI mag SSD cards with them and would shoot about 200 to 500GB per day, 72 TB overall. They backed up each day on set or in the hotel, depending on the location, and each night they backed up to two hard drives, plus some LTO tapes. Instantly, the hard drives were taken off site and delivered back to their base in Brisbane, Queensland, during the shoot, just to be sure of getting the data back into the office safely and locked away.

“This routine meant we ended up with at least three copies of data each night. Any real on-set DIT management was going to be too hard, given the nature of our sets. As some locations were quite tough, we just made sure the cameras and the cards never left our side until we had the three copies backed up. Plus, we wouldn't shoot on the cards again the next day until we knew we had the data offsite and backed up everywhere.”

He and the crew spent two months in Cambodia, devoting 45 days to principal photography. A few scenes also required spending several days in New York City filming actors throughout the city, including a helicopter shoot for the opening.

They had a certain amount of computer hardware in tow for looking after data coming straight off the cameras. “During the shoot we could mainly use an Apple Mac Pro laptop for backing up the data onto multiple drives, and we also had a tube-style Mac Pro onset, burning out and transcoding dailies, which we dropped onto a timeline each night to check every single camera, shot and scene, just to make sure we had everything in the bag. Fortunately, nothing went wrong and we had no mistakes or problems to deal with. By the time we got home, the edit was underway.” 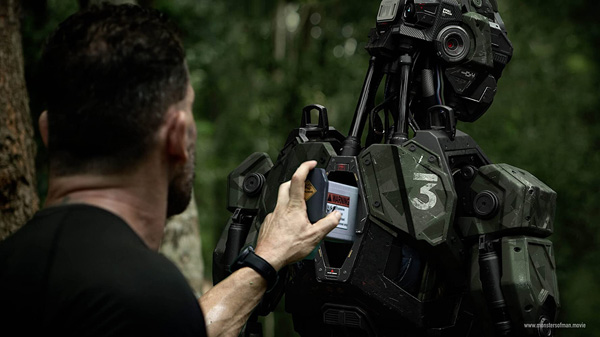 The production came home with a lot of material. Not only was the screenplay long, but once they were on location, Mark had decided to shoot the whole script, which he later felt was a good decision because it resulted in more choice in post, both in terms of the story and the look. He had not originally intended to handle the edit and master himself but, regularly travelling around the world at that time filming TV commercials, he found he could edit the actual movie in his spare time – and got to work. His NLE was Final Cut Pro, which he chose for its speed and functionality.

He was able to edit while he travelled, working with ProRes 422 proxies, and could finish and master the whole project in the single application. “Finishing and mastering in FCP worked especially well for this project because its workflow involves no rendering. It all happens in real time, saving us hundreds of hours,” he said.

Mark said, “We kept the computing side of the project quite straightforward. The edit was done on my personal laptop, because we were only working in HD ProRes files at that time. From a post production perspective, compositing was done mainly on iMac Pros and, again, on my laptop while I was away. The 3D work was carried out in Maya and rendered using Redshift through iMac Pros, and some older Mac Pro towers and PCs fitted with extra video cards.

“At the time of production, which is already a few years ago now, we didn't have any real issue with compute power when it came to compositing and editing – the iMac Pro and latest MacBook Pro were more than enough even in a 4K world. If it hadn’t been for the 3D, I think I could have finished the entire film on it.

“Our production outputs – 2K ProRes proxies for editorial, 32-bit and 16-bit EXR files rendered out for all 3D assets, and ProRes 4444 or 422HQ 4K plates, white balanced and graded, for the VFX artists and compositing – were all generated on our Apple iMac Pro, tube Mac Pro and MacBook Pro machines, built with 32GB RAM. However, 3D was a challenge with Maya and Redshift. For composting in After Effects, Raoul Teague and I used standard iMacs, but for lighting and rendering Raoul used both a Mac Pro and a custom PC.” 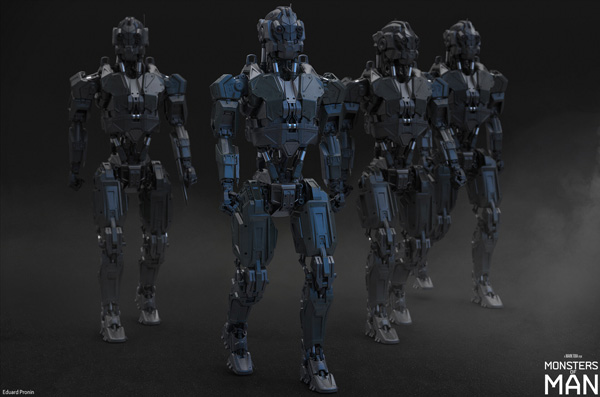 To help design the film’s relentless robots, Mark worked with a 3D artist and concept designer Eduard Pronin in Russia and with VFX supervisor Raoul Teague. On set, stand-in actors had been captured in camera, performing with the rest of the cast, which meant the VFX work included rotoscoping and paint and other cleanup, and camera tracking the plates containing stand-in actors. Working with the tracked plates, the 3D animation team at CYCLO in Vietnam matchmoved and animated the robots. Finally, Mark and Raoul then took the cleaned plates and composited in the completed robots in Adobe After Effects.

The CG and VFX pipelines called for working remotely because Mark and Raoul live in Australia, Edward Proin lives in Russia and all the other artists were dispersed between Vietnam, India, Sweden, Prague, Australia and Indonesia. They used Frame.io to exchange files and notes, and communicate generally.

The VFX artists received either 32-bit EXR files or ProRes 444 or 422HQ 4K plates, all colour-balanced in advance. Once the VFX shots came back to Mark and Raoul for compositing, together they applied a final grade and lit the CG assets with a simple one or two-light approach, to match the live action.   www.apple.com