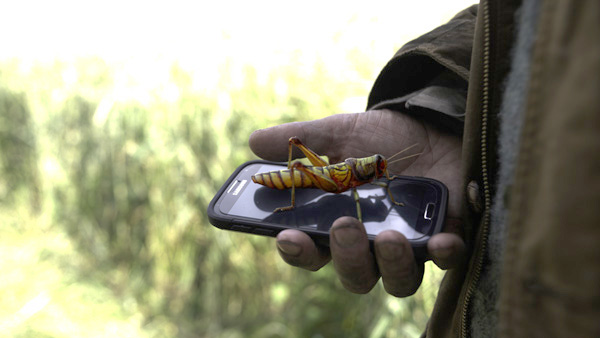 'The Third Day' is a six-part drama combined with a theatrical event created for Sky / HBO, set on Osea, a real island in the estuary of the River Blackwater recreated as a world that captivates visitors with its own interpretations of reality.

The television series is divided into two separate stories of three episodes each, ‘Summer’ and ‘Winter’, each with its own characters and director. Both stories take advantage of their mysterious island setting that turns out to be both idyllic and dangerous. The ‘Autumn’ live theatre event was broadcast live in the UK on Sky Arts and streamed for free.

VFX Supervisor Ivor Middleton led the visual effects on this project, working with the directors of both stories and developing creative ideas throughout. Because the directors wanted audiences to respond to the series as drama, not as science fiction or horror, the VFX were often invisible but always integral to the dramatisation. 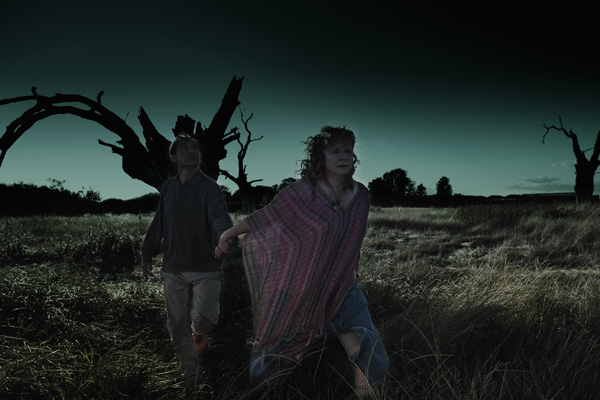 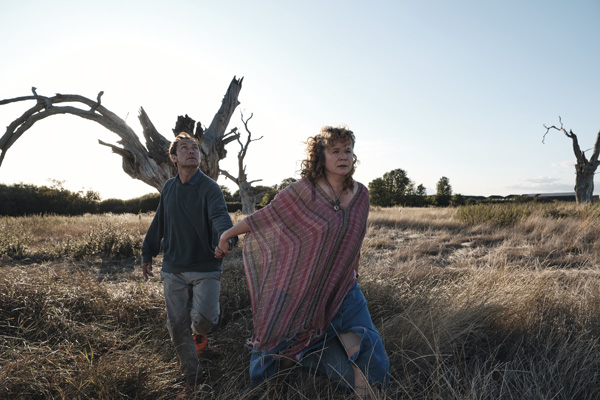 That intention made Ivor’s brief more complicated. He said, “We had to create photoreal effects that in reality were impossible, but had to be subtle to fit in with the tone and look of the shots and the whole series. Many shots were quite complex. To portray the symbolism and mythology of the narrative, the effects had to appear at exactly the right moment to enhance and intensify, but not overpower, the dangerously enchanting world. Achieving that was essential to the viewers’ understanding.

“The symbolism and imagery come directly from the script, and how the direction and production design took it over from there. The narrative is multilayered and stuffed full with imagery and detail that relates to this isolated community and their beliefs. We're told, for example, that Osea is the soul of the world, where everything is either salt or soil. The masked Sajora spirit comes from the sea to sniff out evil. Christianity is distorted and fused with Celtic traditions – priests who sacrificed to the gods by drowning, fire or hanging. There's a recurring theme of disembowelment, crickets that portend death – and more.”

Osea Island is connected to the bank of the River Blackwater by a causeway, covered at high tide in the estuary and only open twice a day. The geography proved to be a logistical problem for the production, regularly cut off by the tide, just as the protagonists are in the script. 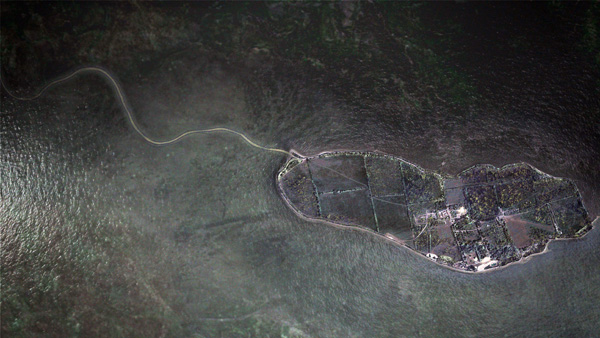 Ivor joined the project during pre-production and supervised the shoot, which took place mainly on Osea but with a set interior of the Oyster Pub at 3 Mills Studios in London. Ivor and VFX Producer Rob Delicata selected five VFX vendors to work with on the project. The facilities involved were Ivor’s company IMG VFX, with Sally Goldberg as VFX Supervisor, Freefolk led by VFX Supervisor Steve Murgatroyd, MPC with VFX Supervisor Oliver Winwood and Lenscare with Sascha Fromeyer supervising, as well as Union VFX.

For all vendors, shot types involved included environmental work, sky replacements and changing coastlines. As the island had to look more remote than it actually is, effects were used to modify the horizons. For the causeway itself, the filming window was narrow due to the tide, so much work went into matching water levels and getting them to look right for the narrative.

Making the island feel more remote and isolated from the surrounding mainland took a fair amount of work. Ivor said, “Osea itself was a fantastic, magical location. In the main, we were modifying the plate footage with matte painting, essentially making the land on the horizon lower and reducing how populated or industrial some parts of it are. We did shoot plates as well, but these were often not so useful – the light changes so much on the island that our footage was unlikely to match the production’s. 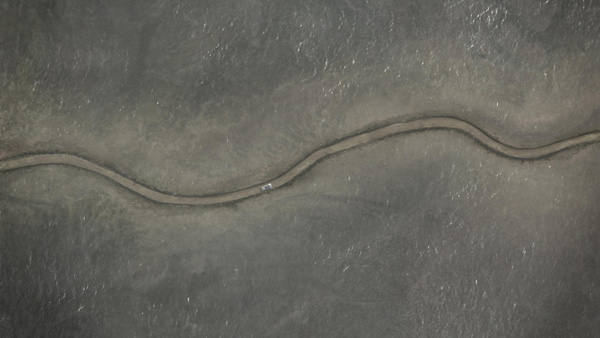 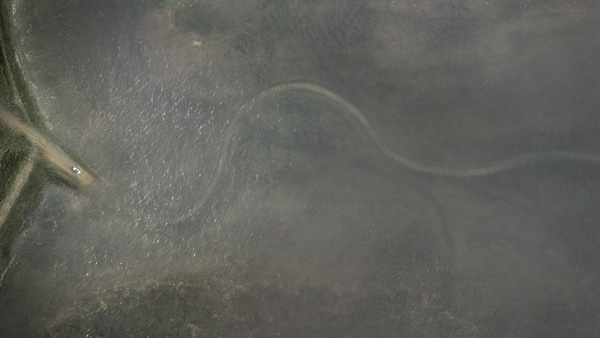 “A challenge we had with the causeway is that the tide levels change so quickly, and we needed it to be at a particular height for the story and to match for continuity. For example when the protagonist Helen arrives on the island at the beginning of the ‘Winter’ story, we were very lucky with the weather and captured some great photography, but the water needed to come right up to the causeway. Our only real way to compliment the photography and match the light was to resort to CG. These particular shots were handled by Freefolk.”

Since the causeway plays a key role in the story as the only way on or off the island, the directors wanted control over its looks. The aerial shots were deliberately stylised and, apart from the elements of Sam in the car, were created entirely in CG and matte paintings to show how it connects the island to the mainland by a serpentine, umbilical-like sliver of land. 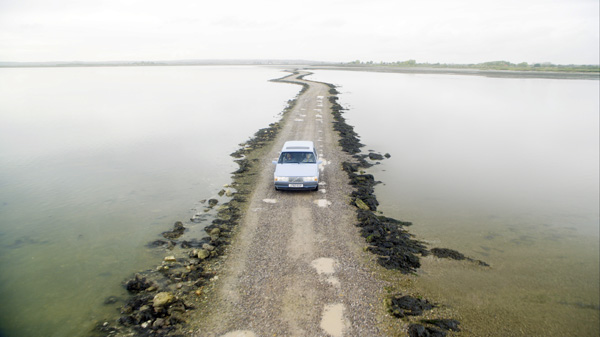 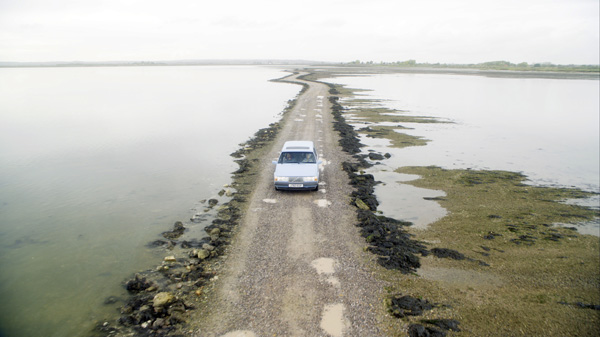 “The starting point was drone footage, but the director Marc Mundon wanted to create big high, wide shots. What was nice about the shots is that you can see the basin and causeway beneath the water, which you wouldn't see in reality, or see the long winding causeway defined against the water. The scale of the water detail is actually too big, and the shots were heavily graded, leading to this stylised, painterly look.”

A good deal of creature and animation work was needed, involving shots with thousands of crabs, crickets, a plate of meat that comes alive, and many others. The fact that the animation was closely associated with the narrative’s mythology in some way made it an interesting story element. For example, numerous shots involve crickets, which are a recurring motif throughout the ‘Summer’ series and appear as various props and artwork as well as animations, and the series concludes with one of the team’s biggest shots – a swarm of locusts rising above the island.

The swarm was a huge undertaking – 50 million locusts – and required a mix of animation, crowd simulation using MPC's crowd software, and FX. A similar approach was used for the thousands of crabs on the beach. About the locusts, Ivor said, “Because the camera starts in close, we needed a lot of detail in the locust animation, and as we go wide we had to get them to flock en masse as well create the detail of the insects hitting the lens. This shot was was actually created by stitching a hand held plate with a drone shot, adding to the complexity of giving the swarm realism and drama. The shot’s length was a further challenge.” 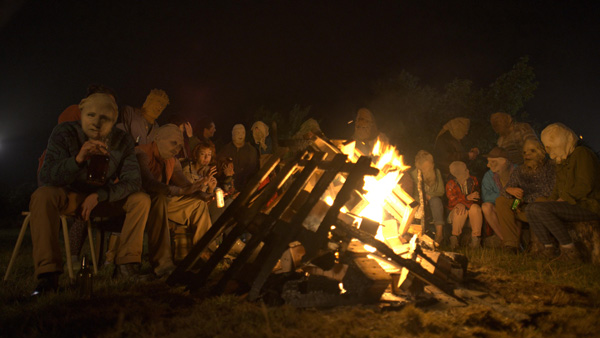 One of Ivor’s most memorable creative challenges was a sequence that spanned episodes two and three, in which the main character Sam decides to drop acid. The decision proves unwise as, on the same day, he is confronted by death and begins to question his own sanity. IMG handled quite a few shots in this sequence because they had to pick up and finish some of the work that other vendors had started but were unable to finish due to Covid.

At one point in the sequence, people with subtly, variously distorted faces are sitting together around a fire. The actors were wearing masks on set, but the director’s intention here was to make their look ambiguous and make the audience question whether the people were wearing masks or not. As Ivor said, “They looked like faces, but with something very odd about them.

“We shot the actors sitting around the fire wearing different types of masks. Originally, these masks were going to come alive and animate, but our ideas changed. We had captured some great shots in which the characters Mr and Mrs Martin switch faces and are wearing prosthetic masks of their own faces. So we decided to create similar effects with the other characters and built 3D faces and tracked them in, but kept elements from the masks they were wearing as well. This made their masks more, but not quite, human and left that uncertainty in the minds of the viewers.”

To cause some meat, sitting on a plate, to suddenly come to life and animate, IMG’s internal VFX Supervisor Sally Goldberg and her team created an all-CG shot in Houdini, although it was based on photography of meat on a plate, which we then painted out. It was one of a few shots that came up as they went through the edit and discussed ideas with the director to authentically reflect Sam's experience of an acid trip. 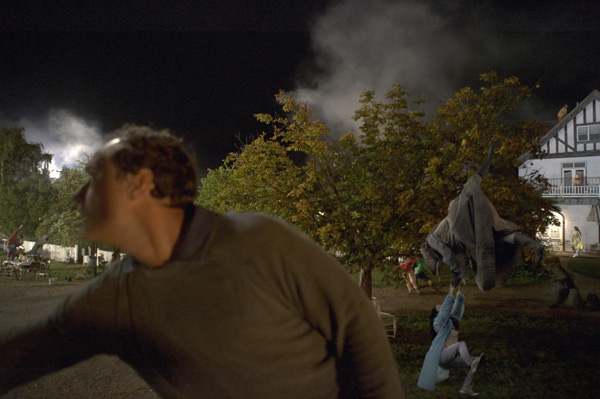 “One of my favourite shots is the moment that Sam is led away by Mrs Martin and seems to float up above the street,” said Ivor. “This was among the shared shots that we completed. The moments in which Sam floats up in the air were filmed in camera – for that aspect, the cameraman and the actor stepped onto a travelling rig. 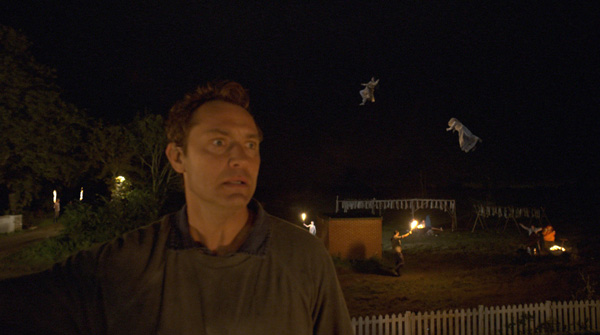 “For the rest, we then tracked the camera to get the perspective right and went back to the studio and shot elements of performers on wires floating in the air, defying gravity and dancing on the roof of the Seabird Hotel. Punchdrunk, the theatre company that co-created ‘The Third Day’ along with the writer Dennis Kelly, contributed some fine performances to this shot.

The show’s overall Producer Adrian Sturges commented on the part VFX plays in the series. “‘The Third Day is a very ambitious project that was looking to break new ground in VFX as well as in every other department. Ivor had a really important role to play in realising that ambition. Ivor and IMG took on a large number of shots for the show, some of which ended up needing a very inventive and creative approach. His team's dedication to getting the results the directors were looking for was impressive,” he said.

The director Marc Munden didn’t want to be too prescriptive with the VFX. He wanted everyone involved to bring their creativity to the sequence, and so it became a collaborative process of concepting and developing ideas throughout. An example of that was Freefolk’s approach, which Ivor said was especially creative. “Their work included CG crickets and water, environment matte painting work, and FX including rain and sparks,” he said. “They designed and animated petrified trees for the acid trip sequence and many other elements. At heart they are an artistically driven company, and were enthusiastic throughout.” 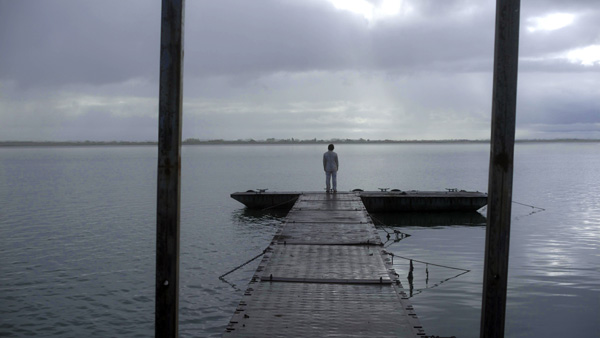 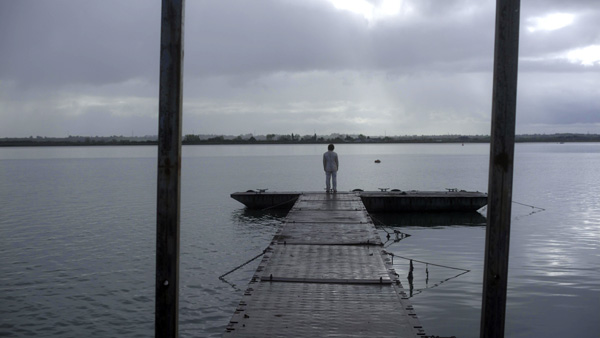 When the final shots were delivered in August 2020, 14 months after production started, the world was a very different place because the majority of the post production took place during the height of lockdown. Rob Delicata talked about how this worked.

“From a technical perspective, we had to switch to remote working with all our vendors overnight, but it was surprisingly smooth,” he said. “We used a combination of Zoom and Google Meet for daily communication and Evercast and Sohonet Clearview for client review and shot approval. For a company like IMG, this was not a challenge as they are frequently bringing together experienced artists who mostly work remotely anyway, so they had everything in place when the entire production and vendors had to switch to remote working.

“We definitely missed the face to face client sessions and being able to view the dailies in a screening room but everyone was able to adapt to the new working practice that’s now in place for whatever the future holds for us all.” 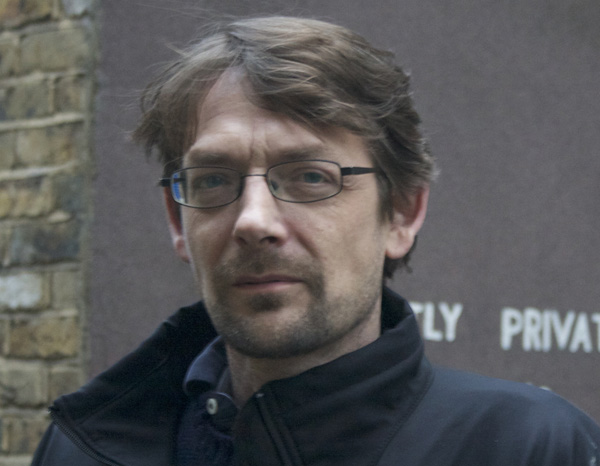 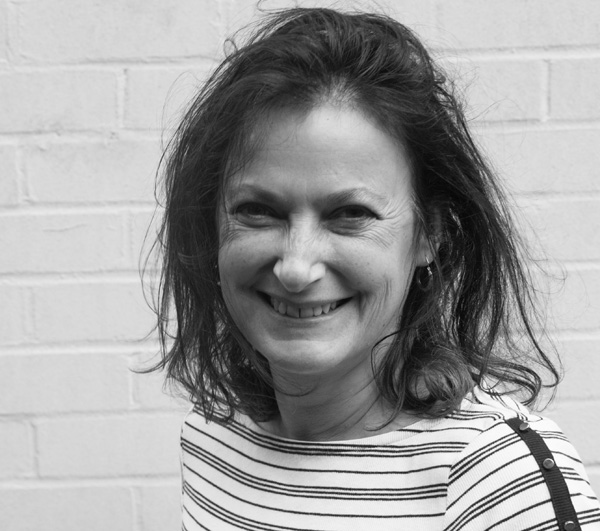 The Third Day is available to watch on Sky and Now TV in the UK and HBO and HBO Max in the US.  img-vfx.com