‘Togo’, an historical drama made for Disney+, is the story of Leonhard Seppala and his team of sled dogs, who completed the longest section of the Great Race of Mercy, the famous sled dog relay that brought diphtheria antitoxin across the US territory of Alaska in five and a half days to save the town of Nome from an impending epidemic. His lead dog was named Togo.

DNEG was the movie’s primary VFX house and created much of the beautiful but dangerous environment the sled journey passes through, including the Alaskan landscape, a violent winter storm and ultimately the treacherous shortcut across the open ice of Norton Sound, racing against the breakup of the sea ice.

The project also required DNEG to create and animate digital husky dogs that were realistic enough to effectively replace the real dogs in shots that would be too dangerous, stressful or complex for them. Digital Media World had a chance to talk to DNEG’s two Lead Animators on the project, Arna Diego and Leonardo Bonisolli, about their work in making the sled dogs’ performances as true to life as possible. 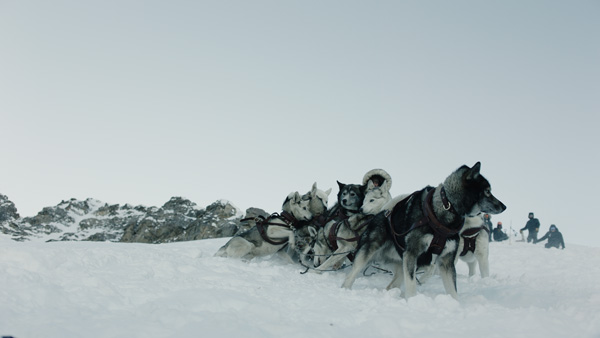 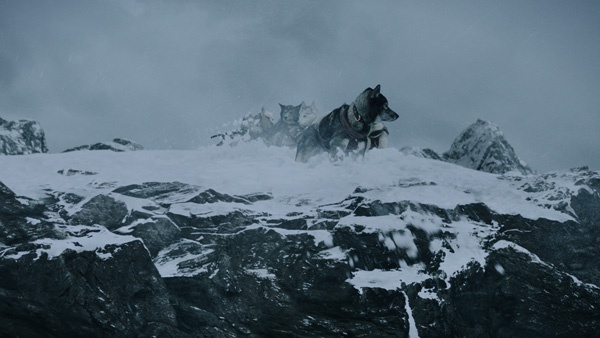 Accurate, complete reference of the dogs was the animators’ most valuable resource. They searched out video of working sled dogs from as many sources as possible. Because it was important to avoid injuring or stressing the dogs, they searched for existing clips and used footage captured on set for the film.

Information from the set location in Alberta, Canada was supplied through Animation Supervisor Aaron Gilman who did some scouting on set for a key sequence in the summer ahead of the shoot, when the area was easier to visit. VFX supervisor Raymond Chen was also on set for supervision and gathering set, light and camera data.

“We took the dogs into a photogrammetry booth made by Clear Angle Studios, who are 3D scanning specialists,” said DFX Supervisor Russell Bowen. “Their set-up involves lights positioned all around the subject, a curved backdrop and cameras set at multiple angles, which we used to shoot a lot of reference.” 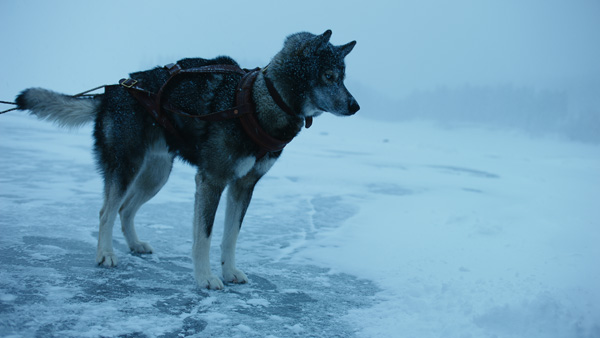 The team was keen to improve the standard and realism of their body rig for quadrupeds. “For example, most quadrupeds lock their front legs in mid-gait. Therefore, for realistic motion it’s important that the front leg modelling and rigging allow that to happen,” Arna said.

“We also wanted to improve the design and rigging of the spine,” Leo said. “The centre of gravity for dogs is normally the chest, but we wanted to be able to switch it to the hip for certain kinds of action. Getting all of these details right, working back and forth with the riggers to improve believability and have control over the speed, was quite a long, patient process.”

The shots of the Norton Sound crossing were the most complex because the dogs need to keep moving forward, while at the same time fighting the loss of traction on the ice as it tilts under their feet. Each dog needed to be hand animated and given its own dynamic physical performances. The animation team spent months analysing the physics of sliding on ice, looking closely at what happens to a dog's body when it falls, slips and slides. 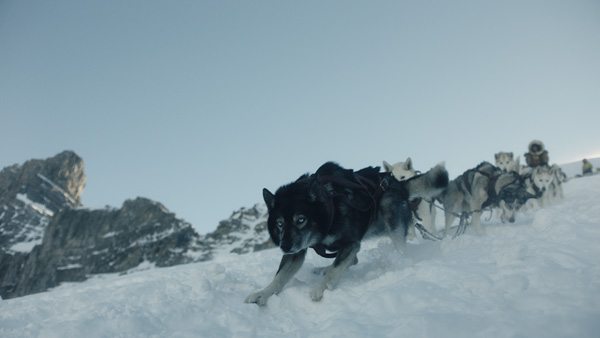 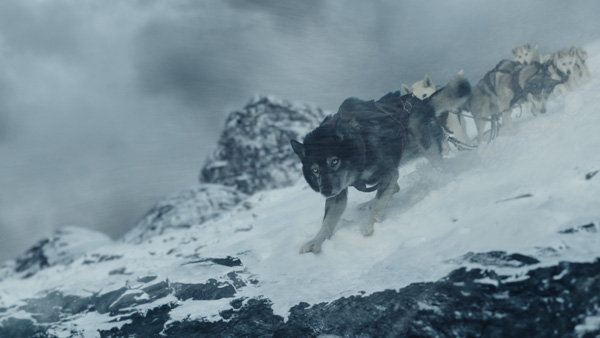 Analysis of ice slipping behaviour involved studying video of dogs at work and in action from as many sources as possible – including footage captured on set. The animators needed a way to extrapolate their moves into performances. Because dealing with 11 dogs on screen was complex, they wanted to integrate them into a workflow, similar to a systematic process.

They decided to collect the various slips and motions they encountered into a library of animated behaviours and gaits directly from reference of dogs trotting, cantering and galloping on ice. This library was very convenient because, meanwhile, they had to match the motion to the story, deciding when to slip and what the slipping should be triggered by.

“We combined the clips together based on our idea of what each dog's performance should look like. We then used this rough edit of clips as a quick blocking pass for the dogs. Once the clip editing pass of each dog was in a good place to portray the performance clearly in terms of slip and gait movements, and approved, we proceeded to clean up the animation and integrate all the physics of other elements like the sled and ropes and tilting ice mechanics,” Leo said. 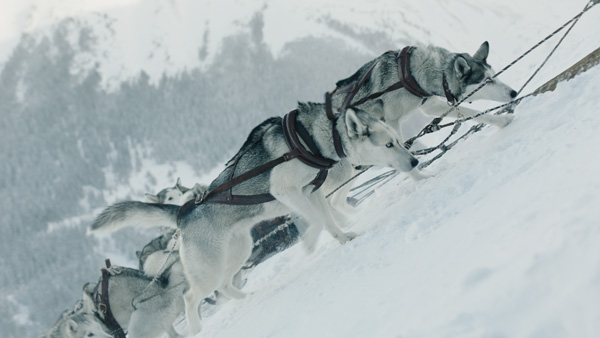 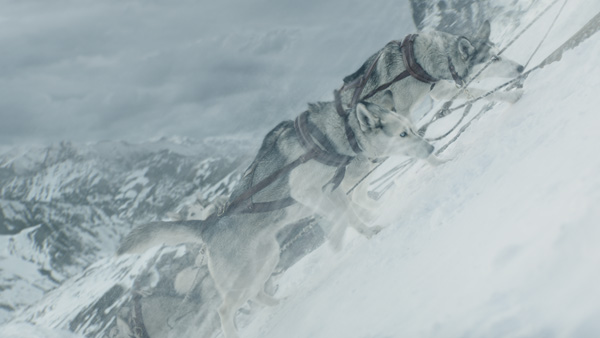 As the dogs were also connected by a complex harness system, they needed to animate these extreme performances within the restrictive limits of the ropes, causing the dogs to push and pull each other around based on complex interconnections.

Out on location, some of the team tried to set up and record slipping scenarios with the dogs on icy snow but this approach wasn’t very successful because a real sledding situation is so complex. There are too many factors at work to recreate them all. Real reference taken from isolated slips was better to work with, and allowed the artists to reverse engineer different moves and collect precise pieces of animation.

The Time Editor added to Maya 2018 for creating and editing animation was helpful for this type of clip-based workflow. The Time Editor is used for non-linear animation editing and makes it possible to shift between clip-level views and keyframe-level details. The Time Editor defines the timing operations – speed, length, start/stop times and so on – so the animators can try out and blend combinations and variations of elements in a scene, and then bake preferred versions of the animation and use them in Maya.

The pre-baked caches of the dogs running at different speeds and other actions were useful to help other departments as well, whose work supported the animation. Leo provided caches to the riggers, for example, and to the layout department who used them to layout the sled scenes. The caches helped prevent sled speeds or motion that would demand unrealistic speeds and behaviour from the dogs.

To explain how they worked, Leo said, “We created the caches in animation and the riggers integrated them into the rig as part of a ‘Layout Anim Rig’. Layout artists were then able to switch between existing caches that, in effect, would automatically make the dogs run at different gaits and speeds. Though it wasn’t the final animation, this allowed the Layout team to make informed decisions and use the correct gait and speed to block their shots.

“For example, if a gait was a trot at 12 kph, they would make the sled match that speed at 12 kph. Likewise, if the highest speed possible for a gallop was 24 kph, the sled couldn't be animated to move any faster than 24 kph in any shot as it would break the reality of what dogs running on ice can do.” 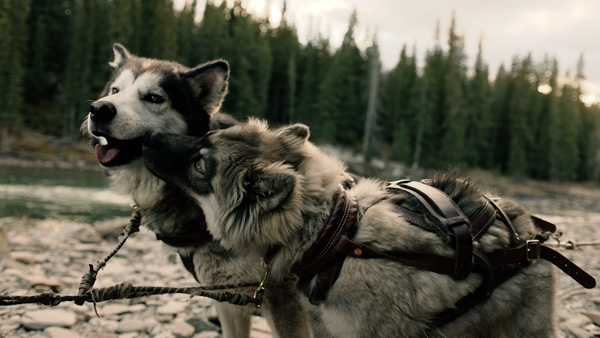 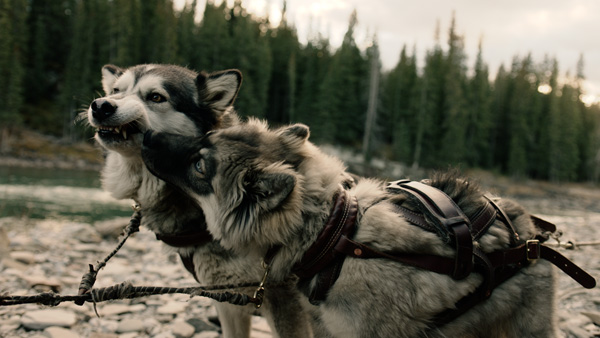 Up to this point, the animation could be created as a first pass. However, in this story, the dogs work together within a harness to pull the sled. The effect of the harness on the collective team’s animation was applied as a second pass. The harness had a cascading effect on behaviour depending on the states of the ropes at any spot and time. For control, they used a colour coded system to indicate the relative tautness and slackness of the individual ropes, and set animatable limits on these forces, within which the dogs could perform realistically.

The dogs were also exerting forces on each other as they altered speed, slipped and worked together. The animators in turn needed to create realistic pushing and pulling motion in the performance.

Accurately animating the dogs’ faces was a fascinating but challenging part of creating ‘Togo’, and important when giving each dog a unique personality. For example, a dog named Ilsa, who became their hero dog asset, needs to snarl at Togo while he takes his place on the gangline for the first time as a puppy. 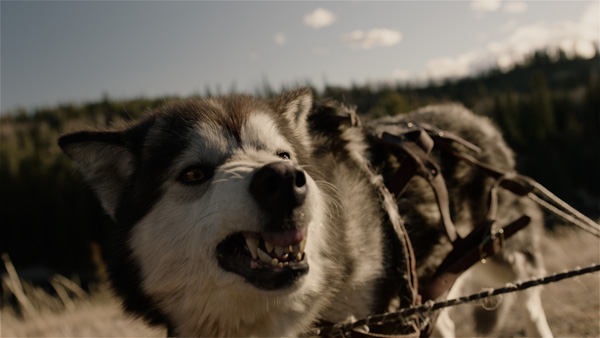 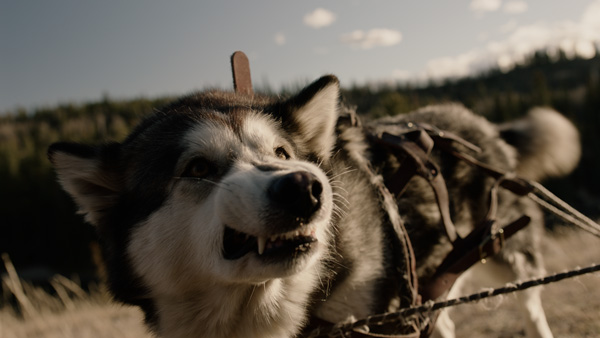 Animation Supervisor Aaron Gilman asked Arna to study DogFACS, the Dog Facial Action Coding System. DogFACS is a scientific observational tool for identifying and coding facial movements in dogs, based on dogs’ facial anatomy, that has been adapted from the original FACS system used for humans.

People like Arna can study and learn how to use the system to investigate communication and emotion in dogs by analysing their facial behaviour, and objectively code the movements. Close-up video and stills of the face are recorded with synched cameras and the images are compared with the neutral face of each dog, accounting for individual variation.

With information about muscle contractions and head/eye movement that she gathered from studying DogFACS, Arna and the rigging department worked together to build a new facial rig for dogs from scratch. As well as Lead Rigger Mischa Kolbe, her colleagues at DNEG on this part of the project were Creature Supervisor Adam Vanner and Lead Modeller Lucas Cuenca.   www.dneg.com