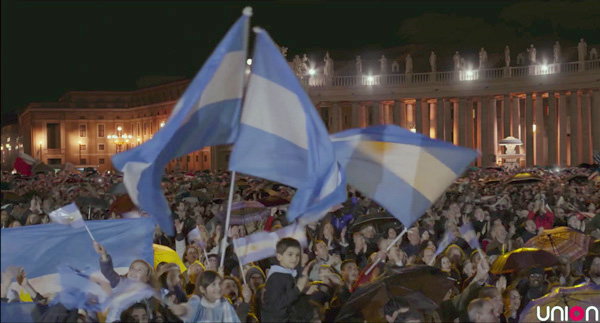 In 2012 Cardinal Bergoglio, the future Pope Francis, grew disillusioned with the Catholic Church and requested permission from Pope Benedict to retire. Instead, facing scandal and uncertain of his ability to lead the Church forward through change, the conservative Benedict drew Bergolio closer, recognising in him a leader able to help Catholics find a path between tradition and progress, guilt and forgiveness. Netflix's movie 'The Two Popes' follows their conversations and, in spite of their differences, growing regard for each other.

Union VFX worked on a total of 288 VFX shots for the film including replication of a number of well known locations inside the walls of the Vatican City, the creation of massive crowd scenes and subtle de-aging effects on images of the current Pope Francis and his predecessor Pope Benedict. Throughout the movie Union’s team also completed many green screen replacements, set extensions, window reflections and weather effects.

Union were approached in May 2017 and, led by VFX Supervisor James Etherington-Sparks, carried out on-set supervision on location in Argentina and Italy over several months, preparing for their work in post production.

Although a large portion of the story takes place within the Vatican City, the Vatican was not involved in the production and Union’s team had very limited or no access to some of the key locations. Therefore, the production replicated parts of the Vatican at Rome’s Cinecitta Studios under the direction of production designer Mark Tildesley. The work included a full-scale set piece of the lower portion of the Sistine Chapel, with the ceiling left open, that took two months to build.

The team LiDAR scanned all portions and elements of the sets and locations that were available to them, and began gathering as much reference as they could - photographing places and objects from a permitted distance, scanning the set builds and buying up photographic books on the Vatican. From this material, the team built 3D models in Maya of St Peter’s Square, the Basilica and the Sistine Chapel. 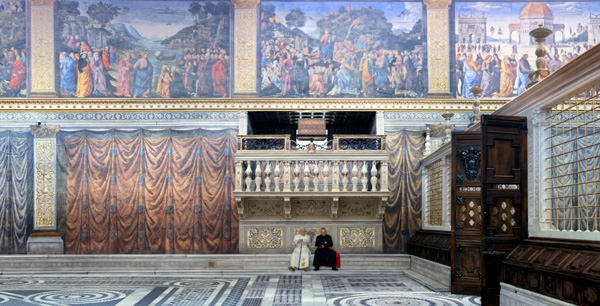 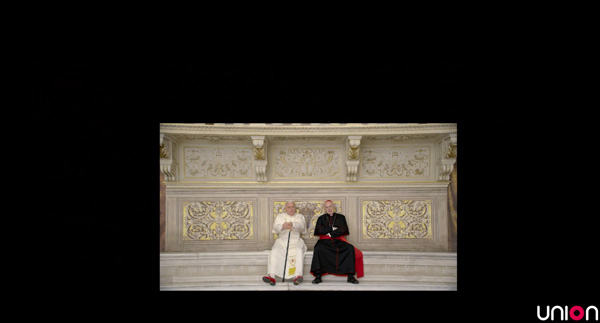 The environments team then textured all of these famous locations using digital matte painting techniques, which including the re-creation of Michelangelo’s magnificent fresco on the ceiling of the Sistine Chapel. Union’s Environments Supervisor Jamie Schumacher was 3D Lead on the project.

“We textured everything using Substance Painter, Foundry Mari or Autodesk Maya and the resulting renders were painted over by a DMP artist,” he said. “Because the camera moves generally were not creating a lot of parallax in many of the shots, we were able to render just one frame and project that render in Nuke onto simple geometry. A DMP artist could then create a DMP pass to add to realism, which was also projected over the CG in Nuke. 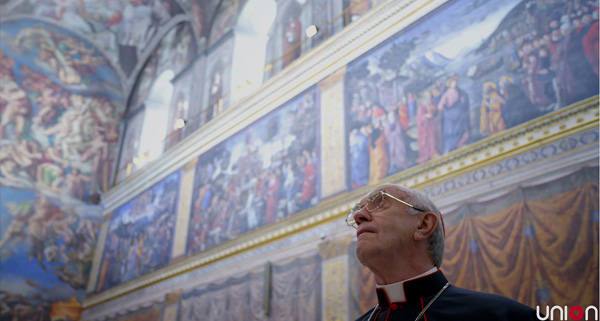 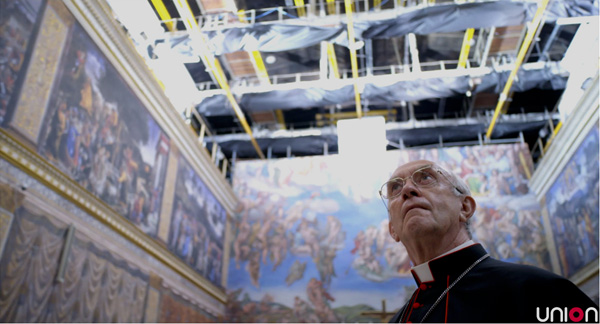 “For the Sistine Chapel, although it is an irregular shape, the client had supplied us with a basic model along with the correct dimensions, and we also had a LiDAR of the set build. We retopologised and cleaned up the material we had, to create the final geometry. But the tricky part was the imagery, as we weren't allowed to photograph it.

“Because the ceiling was recently restored, we made good use of ‘The Sistine Chapel’ by Antonio Paolucci, a coffee table-style photo-book that is good for up to-date reference of how it looks today. We also used high res images from SCALA photographic archives, which needed considerable clean up and stitching. Some textures we had to create ourselves, as we just couldn't find those sections in either the scans or online.

“Once we had all the textures it was a simple case of applying UVs and texturing in Maya and Photoshop. We then rendered in Arnold and the resulting renders were passed to the compositors, who added the atmospherics and lighting effects that you can see in some shots." 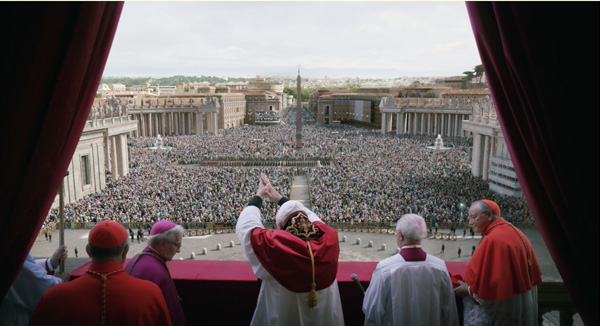 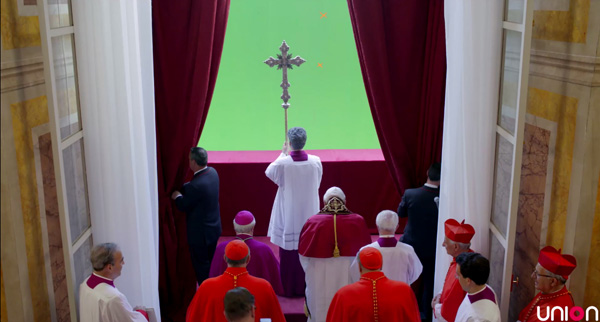 The story centres on two critical changes of Pope in 2005 and 2013, both of which attracted a huge amount of attention, filling St Peter’s Square with Catholics impatiently waiting to discover the identity of the new Pope and celebrate the ascension. News crews from around the world also camped out, aiming to cover the events for the world’s more than 1 billion Catholics.

Altogether, this was going to be an ambitious crowd project, made more challenging due to the production’s inability to shoot in the location and the fact that audiences would view the end result at 4K resolution in very close proximity to the camera. To recreate these scenes, rather like the Sistine Chapel ceiling, it was a matter of gathering up the available resources and making them work.

The camera crew shot the sequences and elements at Ponte Mammolo, a school in Rome that has the same pattern on its floor as St Peter’s. A cast of 300 extras were shot in blocks in different positions at different times of day, and meanwhile relevant tweaks and additions were made to their costumes, including some with umbrellas for the rainy scenes. 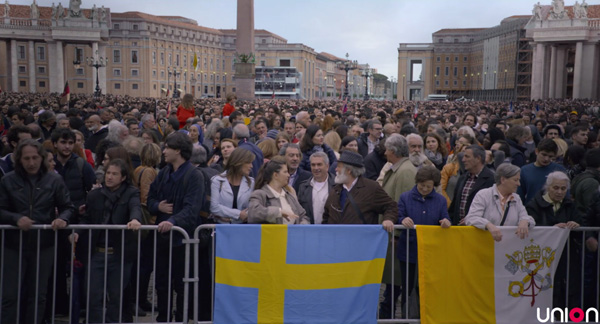 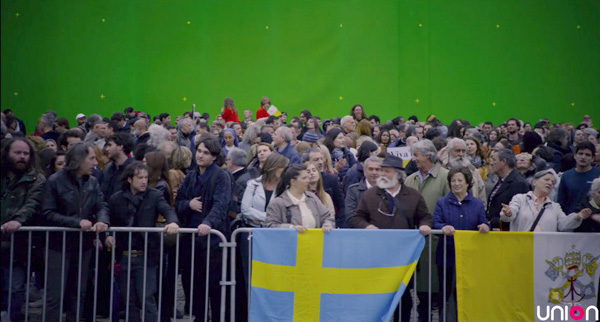 To create the variations across the crowds that Union and the production wanted to see, Clear Angle was also hired to individually scan 50 extras to capture further options for the VFX team. James Etherington-Sparks said, “The rigs required to carry out detailed body scans of this type are expensive and complex. Clear Angle operates multi-lighting, full body scanning systems fitted with 180-plus cameras that can capture very high quality, realistic scans and preserve wide varations in texture.” The idea was to build up a diverse asset library that gave the artists enough flexibility in post to recreate those scenes at different times of day and in different weather conditions.

To keep the motion varied as well, the team conducted several motion capture shoots in-house at Union to collect animation cycles specific to the occasions they were recreating which, again, gave the team even more flexibility during post to produce authentic looking crowds.

Union VFX then needed to orchestrate all of these resources in the shots. They designed a Houdini based system to cope with the enormous number of assets, their clothing and the motions in a way that would allow the artists to easily art-direct them as individuals, allow the film’s director Fernando Meirelles to choreograph them and deliver a believable result at the end. 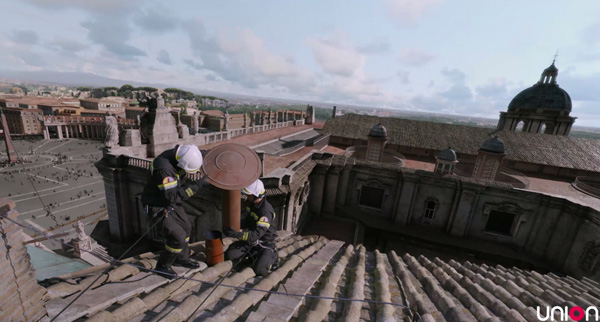 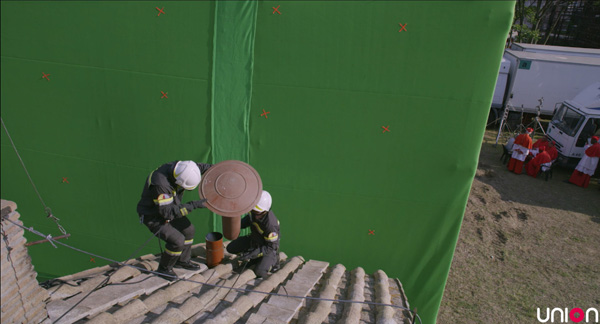 “We had regular reviews with the director so that, despite the complexity of the whole process, we received feedback on the crowd in the same way as we would on any other shot,” said James. “In effect, the way we had set the system up gave him as much creative flexibility to adjust the scene, as he would have if he were directing a real crowd of that size in person in St Peter’s Square.”

This film’s main narrative timeline spans eight years, requiring the team to undertake a significant amount of de-ageing work on footage of the actors. The story includes a lengthy period from Pope Francis’ early life but these sequences were performed by a young actor. 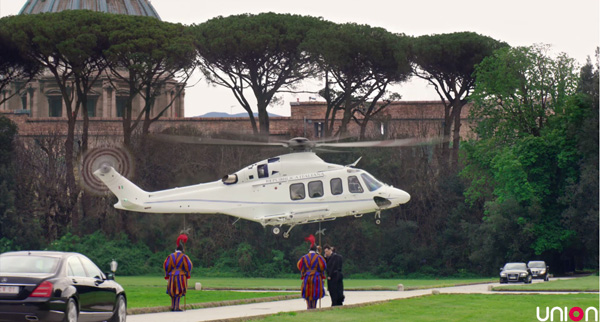 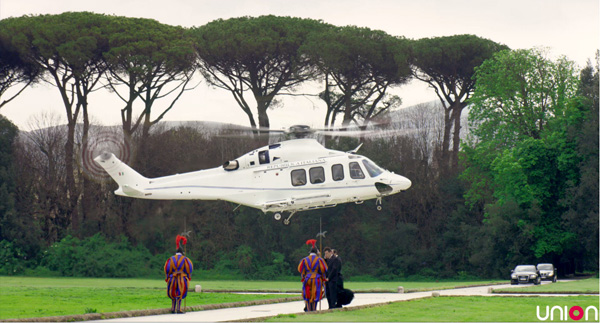 James said, “We were de-ageing by a factor of approximately 10 years so the impact is subtle. This meant we could tread lightly, just making minor tweaks, like reducing lines around the eyes, smoothing the skin on jawlines and removing any marks such as liver spots that inevitably come with age. Searching online for images of the actors when they were younger as a guide, the end result is a very natural look that we achieved using traditional 2D techniques with the addition of Nuke Smart Vectors for tracking in patches.

Smart vector nodes collect motion vector data from the clip and uses it to warp the image and then follow and track on top of that clip. Otherwise, the artist would have to manually warp the image through the clip with key frames.   www.unionvfx.com