DNEG Builds a Better Alien for ‘Men in Black: International’

DNEG Builds a Better Alien for ‘Men in Black: International’

DNEG was the lead VFX vendor on ‘Men in Black: International’ and worked on major sequences, looks and character development, including the MIB London HQ. This was a worldwide project for DNEG, managed from the Vancouver facility while the teams shared work between Montreal, London and Mumbai. By the end they delivered 581 shots, comprising effects ranging from complex FX simulations to the creation and animation of hero creatures.

Digital Media World had a chance to talk to Alessandro Ongaro, VFX supervisor for the movie. The shoot took place late in 2018, so that all of their teams had to work quite fast to meet the production deadline. Although Alessandro could not be there himself, as lead vendor, DNEG carried out onset supervision.

Alien creature-characters are at the heart of all of the ‘Men in Black’ films and were a part of this project that called for pushing the pipeline at DNEG. As post production got underway, quite a few changes were made to the character designs – sometimes to make them work better in the story, or to fit more easily into on-screen animation in a live action sequence - many of which came from Weta Workshop.

DNEG helped with some of the re-designs. The creatures are often hybrids of live action actors with CG elements created and added in post to augment or replace parts of their bodies – as well as facial motion capture gear and sometimes prosthetics the actors wore on set. But each character needed an individual approach depending on the design of the extensions and the actor’s performance.

In the MIB headquarters a lot of head replacements were needed, for example. An alien woman with an elongated neck and elevated head only needed the CG head added on, but a man with four eyes wearing two sets of glasses needed the upper body built up quite a bit as well, which meant animating the new elements to align with the plate performance.

A major character for DNEG’s animators, an alien called Vungus, with a large, fleshy face and exaggerated expressions, played an important role in the story. Seen during the chaotic night club scenes, the actor wore a black body suit on set and, initially, a headcam to record the facial motion, but he often moved very close to the film’s main actors, which made him difficult to manage in the plates. So instead they used a rotomation track for the CG elements. If this track had to deviate from the live action, the artists also needed to change his body performance or alter his expression, but the main effort was to preserve the personality the actor was trying to portray for Vungus and avoid a ‘cartoony’ look.

Alessandro worked on animation direction and consistency with Carlos Rosas, animation lead  in Montreal, who brought with him experience from Dreamworks. “The facial animation was done with keyframing. Facial rigs were developed based on FACS facial blendshapes and motion capture data was also recorded while the actors were working on set. Realism was enhanced by using simulations for the skin moving over the face, jiggle and stickiness of the lips,” Alessandro said.

“Keyframing can actually create continuity problems sometimes, especially because we were sharing this work across two teams of animators, one at DNEG’s Vancouver facility and one in Montreal. When facial rigs have a large number of tiny controls, the final performance can reveal too much variation between animators.”

The night club is a key setting in the story – inside it, where we meet lots of aliens, and also the exterior, a scene of massive destruction when a car explodes and a diabolical pair of alien twins send a great wave-like force flowing down the street. There had been a location shoot for this scene at Ludgate Hill near St Paul’s Cathedral in London, and also a green screen shoot for the live action.

“DNEG mostly rebuilt the set in post – particularly for the aftermath of the explosion - in 2.5 and 3D because we needed to maintain as much control as possible over the environment while simulating the wave effects in the ground,” said Alessasndro. “The director was keen to make these effects extremely frightening. Not convinced that the previs went far enough, he asked our team to make the destruction bigger and scarier.

“For the simulations themselves, we wanted to be able to control the height and speed of the waves, not just overall but in a detailed way over time, combining procedural animation with a simulation below the surface, plus hand animation for the tarmac over the top. We needed to apply a few cheats between shots to retime the effect as required to make their motion appear to be determined by natural materials and forces, not randomly varied.”

The alien Twins came to DNEG with no concepts, just discussions with the director and production some time after the shoot. They wanted to visualise energy emerging from inside the characters in the form of nebulae, stars and galaxies, supernovas and so on. Because the decisions about the looks and behaviour came later, there had been no chance to carry out dedicated onset supervision. DNEG worked out a number of their own concepts and designs. SEE images from the look development process at the end of this article.

Alessandro said, “FX sims were developed for the nebulae that had to remain art directable well into production so that the artists could match the performances and the action of the story. The need to manage millions of stars and introduce noise fields led to the decision to use a particle simulation instead of a fluid sim. Particles would allow us more control and a chance to assign rules. We created and rendered out a variety of different layers and fine-tuned the look later when we put them together in compositing.”

Because the MIB London HQ was an important setting, the production built a large fairly complete physical set, at least at ground level. From 5m up, it needed substantial digital extensions – hallways, ceilings, fantastic machinery and so on. The set also needed more visual detail. For example the original  plan was to place a large screen across the back wall but the result wasn’t interesting enough so DNEG built out the architecture to fill in the view instead. Similarly, they added intriguing details to a large red sphere built on the set that needed a function.

More interesting was the collection of holograms on set. “Territory Studio designed the holograms,” Alessandro said. “We sent them our cameras and they sent back their elements for us to composite into the shots, adjust, add reflections - as needed. But the workflow varied because we had different pipelines. In the office set, for example, Territory pre-comped their elements into the shots.”

Round-the-world project management was a special challenge for Alessandro as VFX supervisor on ‘Men in Black: International’. He said, “Working from Vancouver, I would make an early morning start with the teams in India and Montreal, and then shifted later in the day to London. It was one of the first times we worked across four locations, with the same pipeline and a supervisor at each site. We set up a connection using our in-house software called Clip, which works with Shotgun and RV For reviews.”   www.dneg.com 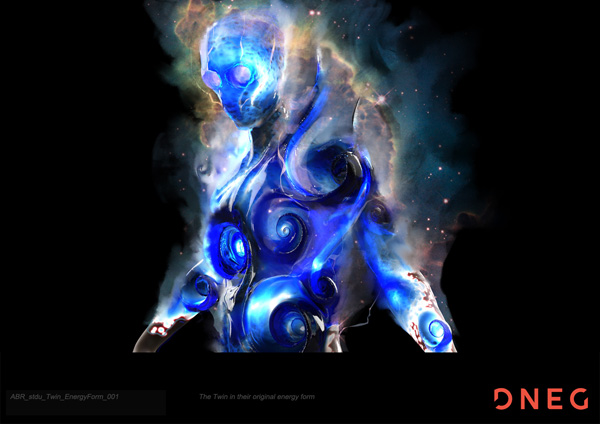 Above: Energy forms; below: Skin-burning patterns 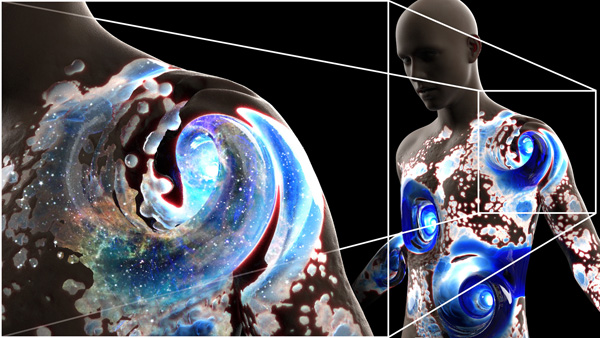 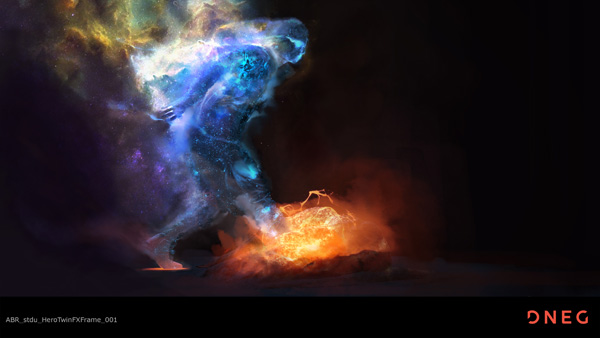