VFX Supervisor Nordin Rahhali shared notes with Digital Media World about designing, building and animating 12 creatures for ‘Fantastic Beasts: The Crimes of Grindelwald’ with the team at Method Studios. Magical creatures are fundamental to the ‘Fantastic Beasts’ films, but not only because they are exotic, strange, scary and sometimes beautiful. Director David Yates envisioned them as vital characters and plot devices that add drama and levity to the series’ dark story.

“The lead character Newt is shy and awkward around people, but when surrounded by the creatures, each of which has its own odd story, he is clearly in his element and at his most comfortable. We were fortunate to join production early on and spend time with the director and VFX Supervisors Tim Burke and Christian Manz, collaborating with the team on creature design and working out previs for our sequences.

“Since we had worked with David, Tim and Christian on the first ‘Fantastic Beasts’, this time they entrusted us with key character designs and animation exploration, affording us creative freedom throughout production. It was definitely a rare treat to design creatures from scratch that are now part of the Harry Potter universe.” 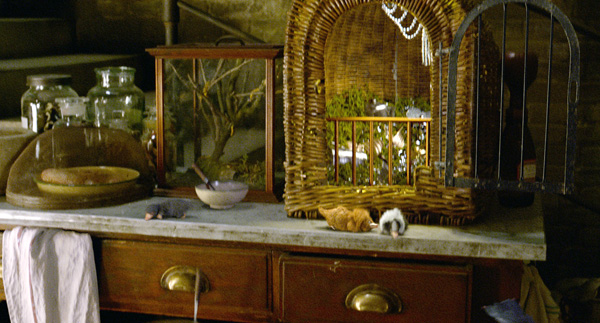 Although the audience sees 12 of the team’s animals on screen, Method actually created 18 magical creatures for this film. On the design side, for some creatures the team started with preliminary concept work from the art department, which they began developing with their own ideas. “But we also designed many of them from scratch. Method Creature Concept Artists Jamie O’Hara and Carlos Huante took the lead here and did a fantastic job. We also collected photographic reference of environments, places we thought would be appropriate habitats for the creatures.”

The designs ultimately came from imagination and stories but Method used reference footage of real animals throughout the process to help them create believable creatures with convincing animation and features. For instance, the Kelpie is an underwater creature with the head of a horse and a dolphin-like body made of long strips of kelp.

“Our design for the Augurey was based on an Irish phoenix, but for the character build we referenced vultures for the plumage and their haggard appearance. The Leucrocotta is a Scottish mythical beast that looked like a mix between a giant moose and a whale shark. And the adorable baby Nifflers combined my daughter’s guinea pig and baby duck chicks. So we always tried to find a real world animal to use as a ‘base’ for realism, before we mixed in the mythical parts.”

Augurey, based on an Irish Phoenix.

Dealing with a large bird creature like the Augurey with very art directed feathers needed some R&D time, and led to the development of a whole new in-house feather system to handle it. They had used feather systems on various projects before this one, but nothing that had to be used in so many difficult shots or stand up to such full frame scrutiny as this creature. “Also, for the Kelpie, the challenge was how to both simulate the flowing kelp that was dragged behind the creature as he swam underwater, as well as dealing with it as he swam on the surface, where it floated and interacted with the perturbed water surface.

“On the other hand, we were allowed more creative liberties for the baby Nifflers, which were an extension of the adult version seen in the first ‘Fantastic Beasts’ film. Not surprisingly, they became an in-house favourite creature to create during production. While the adults have flat feathers, production naturally wanted the babies’ design to feel more like the downy feathers of baby chicks, which made them cute and charming for the audience. We also used my daughter’s pet guinea pig Oreo for inspiration.  We designed an initial baby Niffler and from there, four variations with different colour and feather patterns.

The giant laboratory where Newt and Bunty work has an intriguing design of its own, but also features set extensions that are homes for each of Method’s creatures, viewed as diverse, separate environments through the arched windows ranged up and down the stone walls. This is when the environmental reference the artists collected at the start of the creature design phase became especially useful – the environments all relate to the backstories of each creature. Seen by the audience as a slice of forest, jungle, moon-lit evening and so on, they replace the green screen positioned behind the walls of the lab set.

“The vertical build of the laboratoy is Escher-like - without the upside-down sections but with multiple levels and connecting staircases designed to leave viewers uncertain of how some spots could be reached. Creatively this made creating the lab very fun. We worked on a wide shot of the interior space to concept out just what the different environments would look like, and to balance the colour palette of the looks visually, to keep the frame interesting and engaging.”

The Kelpie was definitely their most complex creature, not only because of its giant size and flowing kelp – its motion was a project in itself. After refining the look of the rough concept art from production with their own concepts, they developed the 3D model and animation supervisor Stephen Clee determined the animation, using the larger pectoral-like kelp sections on the body to help drive the Kelpie through the water.

“Using some sections of the kelp to act like more traditional fins really made the motion of the Kelpie through water feel natural. We also had to take into account that Newt would be interacting with and riding the creature. For movement, we used a mix of keyframe animation and technical animation simulations, with the main fins driving him through the water and some of the smaller kelp pieces dragging along with him.

Stephen had taken the same role of animation supervisor on the movie ‘Okja’ about the close friendship between a young girl and a strange creature – also large-scale though not as large as the Kelpie – that she tries to protect. “Stephen has become an expert at achieving natural tactical interactions between photoreal CG characters and human actors. Drawing on his experience and insights from ‘Okja’, he directed our sequence in a way that packed an authentic emotional impact as well as visual realism.

Animation supervior Stephen Clee managed a team of five puppeteers on set who together acted as a stand-in for the massive Kelpie.

“During principle photography, Stephen managed a team of five puppeteers on set who together acted as a stand-in for the massive Kelpie. Moving in sync, the puppeteers provided Newt and the production team with a physical reference for the creature’s stature, movements and positioning. Inserting the CG Kelpie in post was a delicate balancing act between animation and rotoscoping – a customised kind of rotomation - to make sure the performance was authentic.”

For some portions of the sequence, Newt’s actor was filmed dry on a green screen stage and the water elements were then added in post. For other portions he was shot submerged in a 20ft tank wearing a respirator - no stunt double was used at all. From a technical perspective, the most challenging shots of the film came when the creature, Newt confidently riding on his back, leaps out of the water. The main shot was broken down into parts, with the Kelpie breaching surface, then diving back underwater, and later resurfacing with Newt riding and in control of the creature. They referenced whales and orcas to animate the Kelpie, as well as underwater footage to replicate wave and bubble patterns.

“On set we filmed Newt riding a puppeteered green screen Kelpie, a large buck puppet with reins that was very helpful on set, of ourse, but in fact presented us with the challenge of making the digital elements in the shot with him feel believable. Using extremely high resolution FLIP simulations in Houdini, we were able to create realistic water simulations surrounding Newt with convincing splashes and interactions.

“More that that, Newt’s hand positioning and interaction with the puppet determined how the team animated their CG model. When they needed to be flexible, they would sometimes increase or thin out the amount of kelp to help bury or reveal parts of the actor against the CG Kelpie. Then they rotomated the reins to his hands to make sure they were connected properly.”   www.methodstudios.com