Axis Studios Traverse the VR Universe to Create 'The bOnd'

Axis Studios Traverse the VR Universe to Create 'The bOnd' 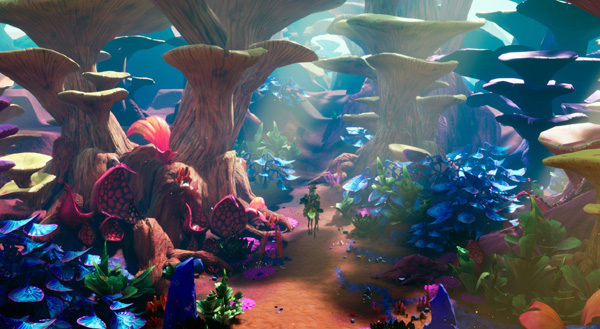 Axis Studios designed and built their first venture into virtual reality, titled 'The bOnd', as a dynamic fantasy experience in which viewers travel through and care for an alien planet, exploring it from many different contrasting perspectives.

The talented artists at Axis Studios, located in England and Scotland, have specialised in 3D and 2D character animation and VFX animation for 20 years, contributing to commercials, game cinematics, real-time projects and long and short form TV and film. But working in VR has brought a fresh challenge and new opportunities for their directors and animators.

Inside 'The bOnd' , visitors identfy with a mystical character called TiaMuati who has special powers she uses to watch over the ecosystem of her planet LuKara. In a trance, she feels threads of energy that connect her and all living beings to each other. Sensing an imbalance, she enters the minds of the forest inhabitants to find the source and attempt to restore equilibrium. Viewers take this journey with TiaMuati and find themselves inhabiting terrified prey, towering predators and tiny insects.

The director of 'The bOnd' Olly Reid said, “VR is definitely the most fascinating area of filmmaking at the minute. It drives empathy and is perfect for producing experiences that resonate with an audience's emotions. The opportunity for viewers to look into and move within the world of the story creates a fully immersive experience.” 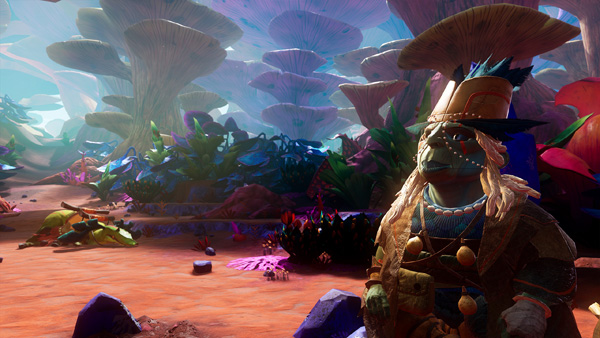 As Olly looked for story ideas, he focussed on aspects of storytelling that are specific to VR and that escape the limits of traditional filmmaking. “I was keen to explore perspective and use the way VR allows you to see the world from different points of view,” he said. “Visitors get to explore LuKara as a bird flying around, as crawling insects and as TiaMuati, a healer of the ecosystem. This led directly into playing with scale, a feature of VR that is incredibly fun.”

Inspired by his belief in the balance between human beings, creatures and the natural landscape, the project expresses Olly's awareness that negative actions to one or more of these elements has a direct impact on the overall balance of the ecosystem. “I wanted to visualise these connections, or bonds, as a web of life that can only be seen by those most trusted by the natural world itself,” he said. 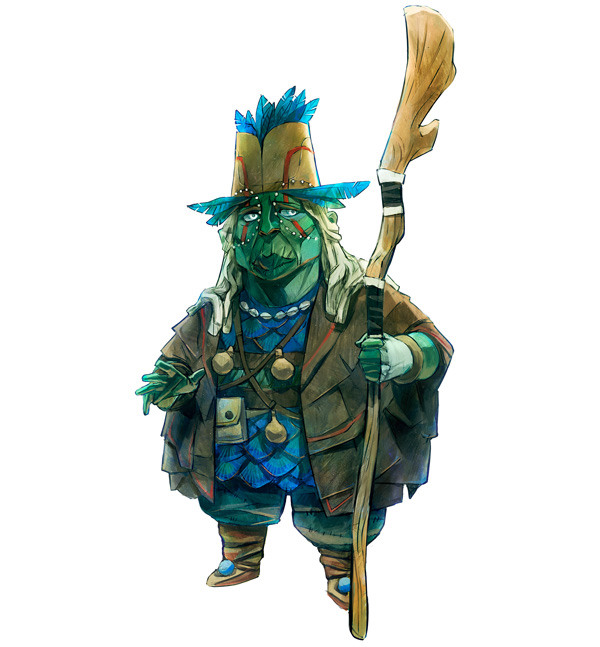 To take Axis' first real dive into a fully developed VR story, Olly and the project's CG supervisor Michael Zaman drew together Axis' 20 years of expertise in animation with the more recent skills of their real-time team. Olly said, “The development from the initial 60-second pitch to the final film was huge. We learned a lot about VR storytelling from making 'The bOnd' , especially early on, during pre-production. An important lesson is that viewers need time to take in their surroundings. They need to feel grounded, and have the freedom to look around and absorb everything, before launching into the story.

“The story and the way we told it developed a lot over the course of the project. We iterated again and again in the pre-vis and layout stages to find the best ways to tell our wordless tale as clearly as possible and capture the viewer's attention.”

Most of all, they were interested in forming an experience that could be felt with equal authenticity by all people. How does a very tall individual experience the perspective of an insect? They needed to force the viewer somewhat into thinking they were within the body of each particular character. “After scaling the world up or down around you to match an insect's or a bird's eye view, when TiaMuati looks into your eyes, she’s looking from a position that reflects the height and size of your character’s structure,” he said. “We also added appropriate limbs, such as wings or claws, attached to a body that can be seen when looking down with the headset. 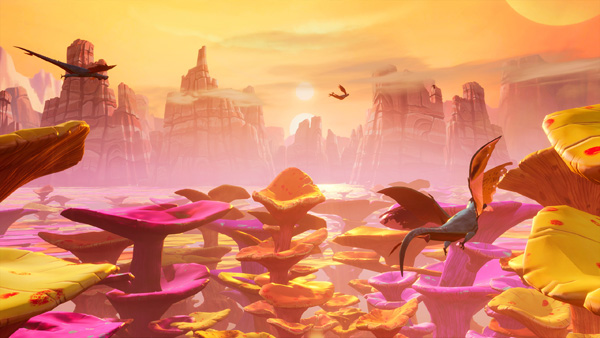 Pushing the boundaries of VR was definitely one of the team's goals, and one of the most significant boundaries they pushed was using dynamic cameras as a storytelling device. “Such cameras haven't often been used in VR, but in 'The bOnd'  they are  essential and really form the heart of the story - experiencing life through the eyes of another creature. We also introduce camera cuts to new scenes that need to change perspective and scale in a way that is pleasant for the viewer,” said Olly.

“Making these techniques work took balancing, adjusting and a lot of testing! Early on, not surprisingly, we found that larger movements with the cameras in multiple directions made people feel sick, so we moved towards smaller movements. Keeping the camera facing front-on, in the direction of the movement, helped remove the issue of sickness, and allowed passive experience throughout the story.

“Even so, we still wanted to give viewers a little bit of a ‘rollercoaster’ feeling. We included the dive from the cliff, for example, but tempered it with plenty of time for the viewer to understand what is about to happen. The movement did require building much larger sections of the world than a static experience would have needed, but that allowed us to explore different LuKarra environments and new characters, enhancing the feeling of a complete world.”

Effort was put into producing a strong art style that would stand out and push the look of real-time VR as far as possible, while maintaining a high quality experience on the lowest specification VR hardware. Olly said, “At Axis we really love stylised animation, and we wanted a distinctive style to set 'The bOnd'  apart from other VR short films. Realism is still difficult to achieve, especially on low spec machines, so we needed to create something that would look visually interesting and immersive, but still perform well.

“Combining vibrant colours, interesting 'alien' shapes and bizarre creatures helps to give LuKara a feeling of a living, breathing world with a lively ecosystem. The larger, strong shapes also helped create a sense of scale and depth, fill in space and at the same time remain efficient.”

Optimisation was critical for a true VR experience. Many small events and details continuously unfold to keep up the visual complexity throughout. Michael Zaman said, “Careful planning, creating budgets and designing to the minimum spec hardware saved us a lot of pain in the optimisation. We used levels of detail to define the distances, for example, especially in the glade sequences, along with cards for distant geometry.

“We could also rely on our vast game cinematic expertise – from using material instances for combined Draw Calls and merging meshes where necessary, to using cheaper materials such as unlit, card-based transparency for more expensive effects as much as possible.”

Level streaming at certain points of the sequence, as well as timing the visibility switches, are used in order to allow the constant environment changes. The artists managed to keep areas small, using set dressing to give the impression of a thick, lively forest, but in a smaller space. 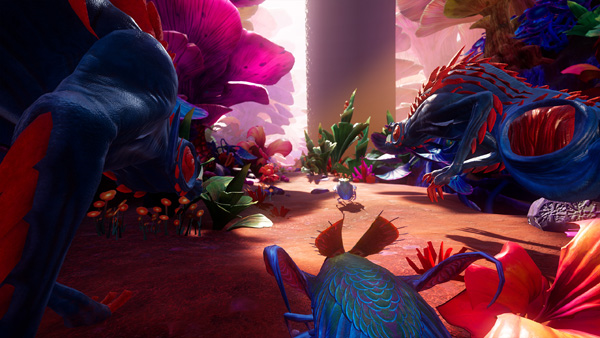 The project centred on the Unreal Engine, which the real-time animation team are very familiar with. This choice meant they could develop 'The bOnd'  for the Oculus Rift and HTC Vive headsets for release on Steam and the Oculus Store fairly readily, and meanwhile put their effort into channeling the underlying software and production pipeline into virtual reality.

“Adapting the existing Axis pipeline to work with Unreal allowed a continuous process for our team to work through,” Michael said. “The animation is done in Maya and we use a custom exporter tool to handle exporting whole scene data from Maya to Unreal. We then assembled the animation in Unreal using Sequencer, which is extremely flexible and allowed fast iteration, critical in the early stages.

We also created new real-time rigs that allowed us to keep a lot of the complex rigs and features we use on our pre-rendered shows by baking down the data to a real-time-ready rig. Actually, the new skills for the team were more about adapting and creating art for VR. Axis has a history in real-time content - making assets for VR was just taking those skills a step further.

Sound design proved to be an interesting challenge for the team. The artists collaborated with Submersion Audio, who worked on 'Dear Angelica' and 'Henry', and composer Wevie to create the project’s soundtrack, exploring binaural and spatial audio to create distinctive sounds for each of the film’s main creatures plus others hidden in the depths of the forest. 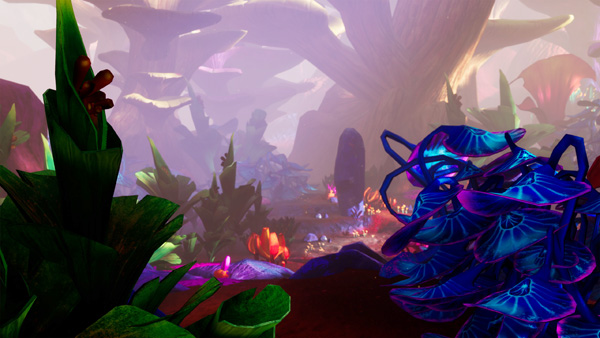 Axis quickly realised the important role audio takes as a tool for directing the audience's attention inside VR environments, and for storytelling generally. Michael said, “Submersion Audio's team has a lot of experience with VR sound. Moving up from stereo to spatial sound is a core part of experiencing the presence of objects around you. Your ability to hear sounds change with distance and movement is something you can’t build into, or fully experience within, 2D or conventional 3D animation.”

Thinkng about future projects, Olly remarked, “I think we’re going to see some huge strides in storytelling techniques for VR in the coming years. It’s hard to say if it will work for longer storytelling experiences, even as the fidelity increases but, for one example, it has amazing potential within an expanding array of location-based entertainments. Virtual reality is definitely something that Axis is keen to be at the forefront of.”   www.axisstudiosgroup.com

'The bOnd' was designed to experience on the Oculus Rift and HTC Vive headsets, with a recently ported 360 version. It is available to download on the Oculus and Steam stores.