Twin Pines Returns to 16th Century Seville for ‘The Plague’

Twin Pines Returns to 16th Century Seville for ‘The Plague’ 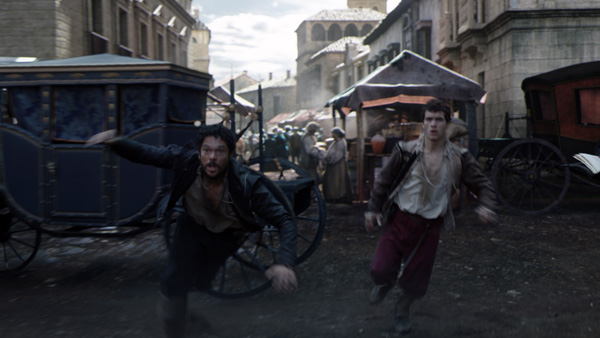 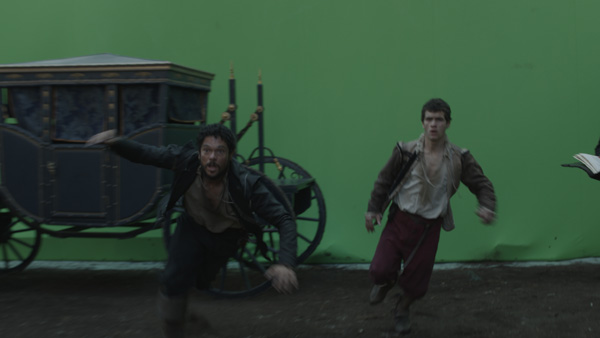 Twin Pines VFX studio in Madrid created the visual effects for the historical drama series 'La Peste' (The Plague), a Spanish production from Telefonica's Movistar+ subscription platform for digital TV. It tells a story of crime and intrigue set in 16th century Seville during an outbreak of the bubonic plague.

Ranking as the costliest TV series made so far in Spain, it has also achieved the highest viewer results of any show aired on Movistar+, and was the first TV series to make official selection at the San Sebastián International Film Festival. Movistar+ has also launched a drama channel across Latin America called Movistar Series, with 12 original series set to debut throughout 2018, including 'The Plague'.

Twin Pines' team of 35 VFX artists created over 500 shots over a period of ten months for the story. Their main challenge was digitally recreating the city of Seville as it was in the 16th century, aiming for the same level of historical accuracy that would be expected of a documentary. “Reconstructing the city was made more of a challenge by the fact that almost nothing remains today of Seville in those days,” said Juanma Nogales, VFX supervisor at Twin Pines. Digital Media World talked to him about working on the project. 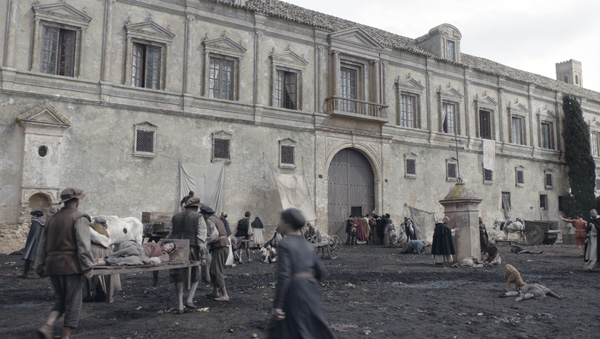 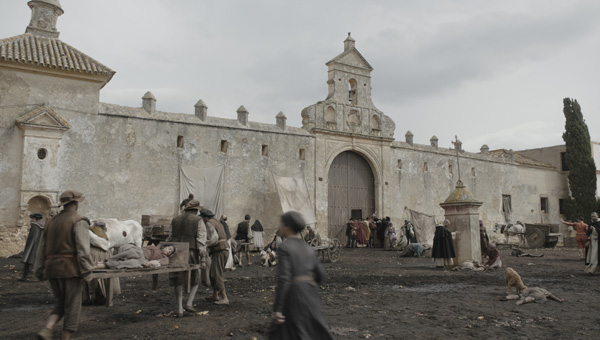 “It took a carefully considered combination of historical authenticity and aesthetic taste, which is why the collaboration between all the different teams was so important - art direction led by Pepe Domínguez, make-up under artist Yolanda Piña, DP Pau Esteve Birba, Juan Ventura with me on VFX, and post-production by José Moyano and Iván Benjumea. Unless everybody had been working in the same direction, a production as ambitious as 'The Plague' would not have been possible.”

To establish and maintain that finely balanced combination of creativity and accuracy, Twin Pines team started work on the project some time before the shoot got underway. Throughout production the artists worked with historical advisors and documentary filmmakers. Thorough development of visual layers and the creation of 3D elements depended largely on maps, etchings and paintings from the period.

“Our VFX art director Iñigo Rotaetxe worked side by side with the experts and the series art department, so we ended up having our own expert on this period in Spanish history,” Juanma said. “He came away not only with knowledge of the visual arts of the era but also of other aspects of life we needed to know about, such as social behaviour, urban planning and so on.”

Guadalquivir River and the Port of Seville 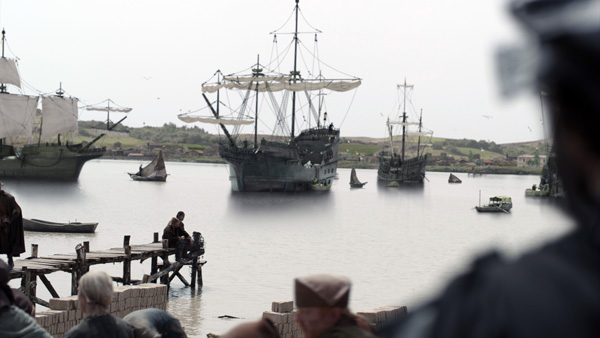 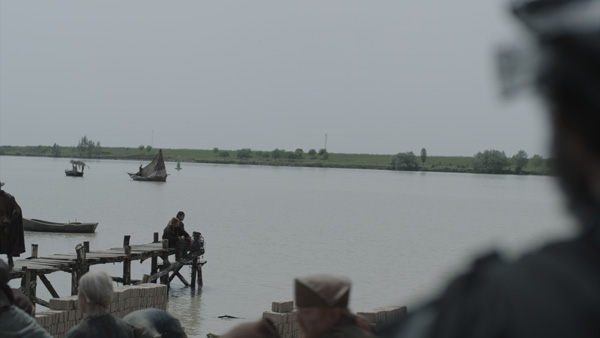 Among the most complex sets to replicate were those around the port of Seville, which was the most important in the world at that time. Juanma said, “Today, unfortunately, the Guadalquivir River close to Seville has absolutely nothing to do with how it was in the 16th century, so we needed to do a lot of research. Nevertheless it was useful to be able to visit it to get an idea of the scale and distances. Certain elements still stand that helped us in this sense, such as the Torre del Oro or Triana, on the other side of the river.”

Twin Pines approached their task by shooting numerous plates of the Guadalquivir river around the area of the Isleta in Coria del Río about 25km south of Seville, removing stray evidence of modern life and adding CG elements to achieve an end result faithful to history. These images were used in the port and ship sequences. The team also had to model the ships and galleons themselves in 3D, which were then integrated into the different scenes.

Juanma noted, “The sequences that take place in the port were filmed in the Guadalquivir River itself. In contrast, when following the river through Coria del Rio, the geography we see in the footage is probably very similar to that of Seville in the 16th century. So for us, putting this project together was like creating time travel.” 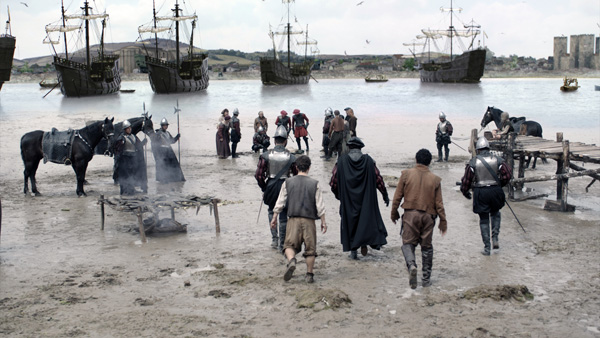 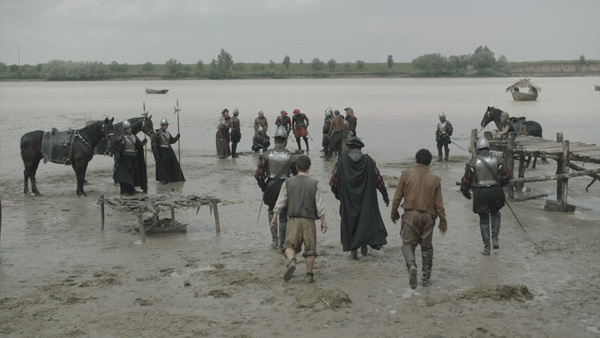 One of the biggest technical problems they encountered was that, unlike other productions they had worked on before, they had to build sets to accommodate unrestricted camera motion. Because the director was looking for a sense of immersion and wanted the audience to feel what the character felt being there at that time, the production allowed the camera to travel freely on set, preferring handheld-style camera movements that followed the characters and captured a full 360⁰ view of the set.

“This had a number of implications for us. For example, shots with frame counts of over 1,000,” Juanma said. “Still more challenging, it meant that we had to work inside whole sets. For example, the port of Seville had to be built completely including the houses of Triana on the opposite shore, ships on the river, the walls and towers, the shipyards -  everything.”

“Consequently, when we finally received the shots for the scenes of the port, we had to have that whole set ready – typically, when we had our 3D cameras in place, matching the cameras on set, we would see every asset we had built. We followed the same approach for all the main sets of the series - the port, Cathedral and Giralda, noblemen's streets, city gates and walls, shacks outside the walls and Castle of San Jorge.” 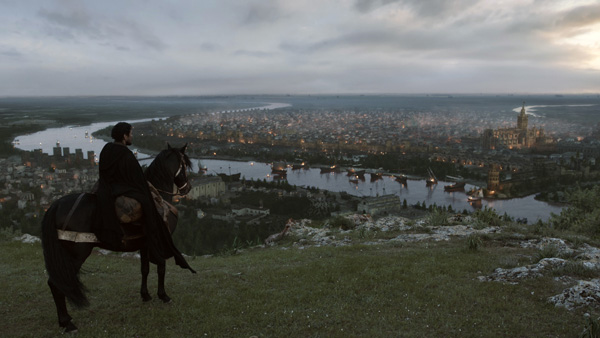 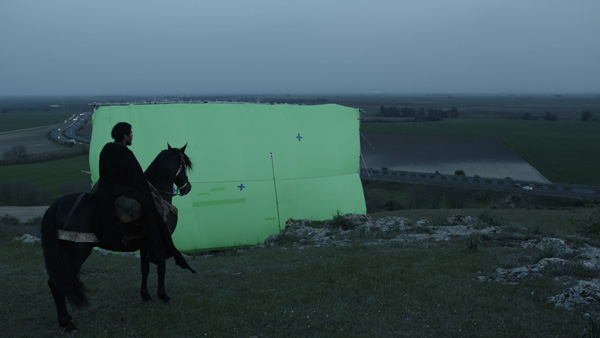 An example is the beginning of the first episode when the main character appears on horseback looking down on Seville from a distance. In fact, the only real element in this scene was the horse. The character was on a hill overlooking a motorway, positioned in front of a green screen and in post, their 3D reconstruction of 16th century Seville was used to replace the screen. From the very beginning they realized that the best approach to set extensions, which constituted a lot of their work, was 3D techniques - working on complete sets with their respective 3D assets. Matte paintings were only used in specific cases for very distant backgrounds.

Interestingly, a large portion of the major buildings and monuments that appear regularly in the series, even the cathedral, the gates and castle, have disappeared from Seville. Entire neighbourhoods and areas have changed so much that, where the monuments themselves still exist, they are now situated in totally different surroundings. The team would often choose similar buildings at other locations to use as a source of photo reference, and rebuilt them in 3D.

“Our main software package for 3D is Maya, but we use numerous tools that help create the final touch - ZBrush, Mari, Substance Painter, Mudbox, Speedtree and others,” said Juanma. “The rendering is done with Arnold. The only tool we could use in pre-production to show our intentions was the concept art we delivered once the location was confirmed. After that, our 3D department built the assets and as soon as we received the shots we quickly prepared a slapcomp with the layout of the CG elements for approval.” 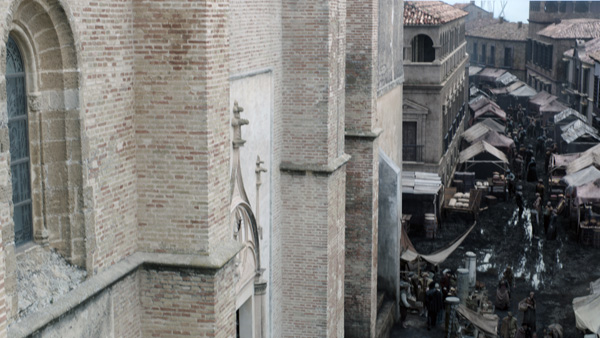 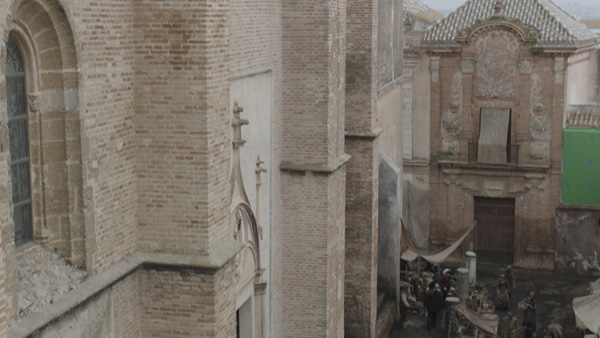 Twin Pines’ work included reproducing the crowds of people seen in several sequences. For instance, in one of the episodes, a space large enough to hold around 15,000 people was populated with only 100 extras, and plates were shot with carefully placed green screen. Meanwhile the extras and their clothing were scanned in 3D, and this imagery was used to digitally recreate a fleet of varied individuals who could then be used in the plates to replace the screens.

Juanma said, “We had several options for the crowds, both plates shot of people in different actions and 3D models scanned directly from the extras, but we finally saw that the best solution for wide shots was always using 3D models. We developed a workflow for building the digital extras in an efficient way, preparing the model in Maya and ZBrush, rigging in Maya and simulating the crowds in Houdini.

Twin Pines' work generated a volume of data for VFX of around 50 terabytes and over 19,500 hours of rendering. Foundry Nuke Studio software, now completely integrated into Twin Pines' studio played an instrumental role in the project by running the VFX, editing and finishing with one single application. “We started using Nuke Studio about five years ago and since then, it has become our main shot management and review software. What is interesting for us is the ability to take complete control of a project,” Juanma said. 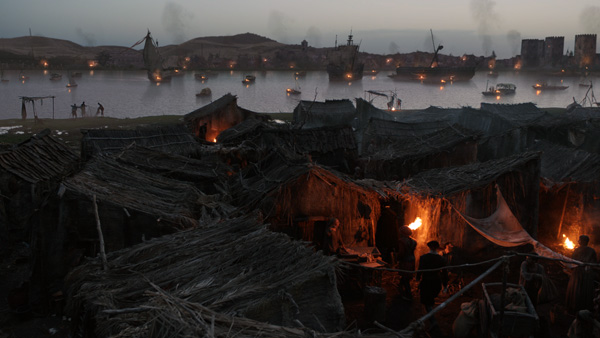 “First of all, the integration with ftrack works really well, making it easier for us to track everything on the project. But it is also very powerful when preparing materials for the whole team, and simplifying the management of this material. The effect is similar to having a mirror in the timeline, reflecting the folder and file structures that compositors will use later on. Finally, Nuke Studio makes it very easy to work with VFX shot versions and review them with the supervisors – when you can quickly jump from version to version, always in context - and also with the client.”   twinpines.es