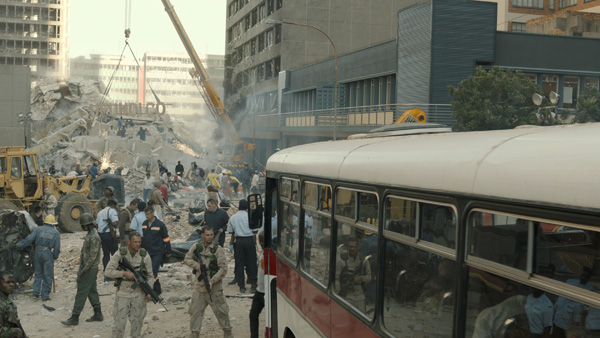 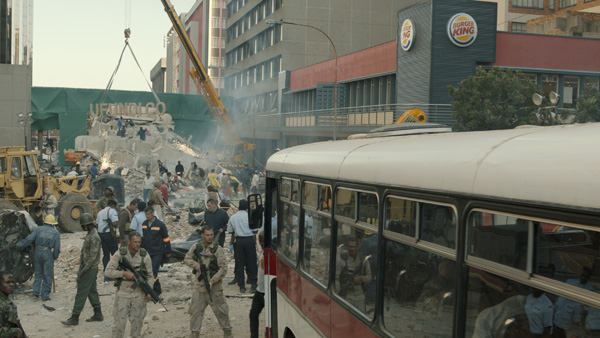 'The Looming Tower' is a dramatic miniseries made for web television based on the book of the same name by Lawrence Wright. It was released on Hulu from February through April 2018. Digital Media World spoke to visual effects supervisor Aaron Raff and VFX producer Steven Weigle from Phosphene about production of the series and their team's role in creating the visual effects.

'The Looming Tower' traces the perceived rising threat of Osama bin Laden and Al-Qaeda in the late 1990s and how rivalry between the FBI and CIA at that time may ultimately have led to the incidents of 9/11. Its main characters are members of the two US counter-terrorism divisions, the FBI's I-49 Squad in New York and the CIA's Alec Station (Bin Laden Issue Station) in Washington, DC. The series follows their stories as the two groups struggle for control of essential information while, on the surface, appearing to work together to prevent an attack on US soil.

Where in the World

During preproduction, some months were spent finalising locations because the series' story unfolds at several different international settings. Determining what locations would be feasible for the shoots and how they could be localised, took time. Phosphene spent those months contributing previsualisation to support decisions about the sets - how much could be built physically, and how much built digitally, while staying within the timeframe and budget. They also worked out what reference photography would be necessary. 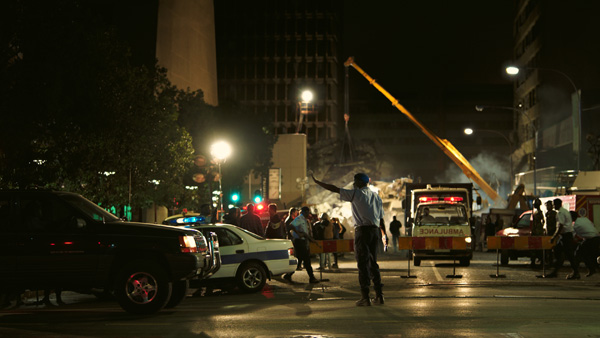 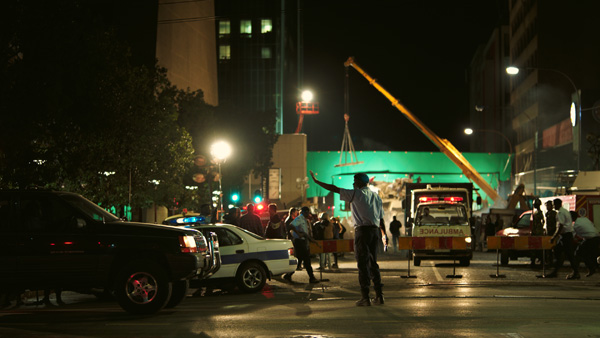 The series began filming in May 2017 in New York City. Eventually, the production lasted six months and travelled to six countries. New York locations could mostly be used as they were on the ground, but otherwise, various sites stood in for the places at which the story actually took place. The scenes set in Yemen were filmed in Morocco, and footage shot from drones and cars moving across landscapes in Pakistan were used to represent Afghanistan.

Johannesburg, South Africa was where most of the filming took place, however, and became the production base. The producers found venues there and elsewhere in South Africa that could stand in for various places including Nairobi, Tanzania, England, Albania and Las Vegas.

Apart from serving the story, the reason that finding suitable shooting locations was so important was the filmmakers' preference for portraying the incidents by intercutting live action footage shot for the movie with newsreels of the real events. For Phosphene, who completed about 330 VFX shots across the ten episodes, this filmmaking style became one of their main challenges in terms of visual effects. 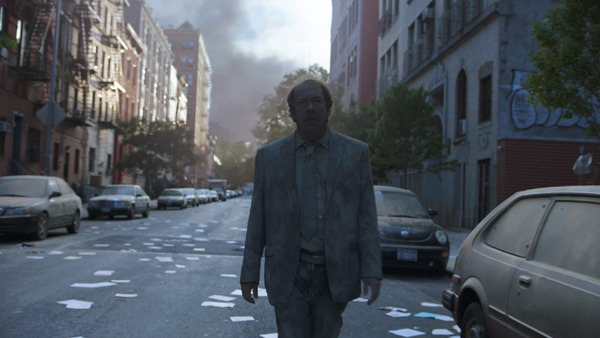 The showrunner's and producers' brief indicated that their main concern was recreating what the audience was seeing in the archival films of events. Visual effects were to be used as a bridge between the new footage and the newsreels, not necessarily dwelling on the violence of individual incidents but on historic authenticity and accurate localisation. Most shots also needed clean-up to remove evidence of modernisation. Phosphene worked with the production designer Lester Cohen and the production's research team, who did abundant research, and shot and collected photos of places and events.

Phosphene augmented those efforts with further reference shot at some of the locations. Key buildings like the US Embassy in Nairobi were not so much of a problem, as they are still relatively unchanged and available for reference photography, but the surrounding streets and neighbourhoods have expanded and moved on considerably.

In the first episode, portraying a truck bombing during the 1998 US embassy attacks in Nairobi called for major explosion effects that required 3D simulations for shock wave FX, smoke and fire. Aaron said, “We used FumeFX and 3D Studio Max for all parts of the truck bombing as well as for a variety of smoke plumes throughout the season. To recreate the aftermath of the bombing, a very large set piece was built featuring a massive pile of rubble, and the set immediately surrounding it was dressed with detail consistent with such an event. 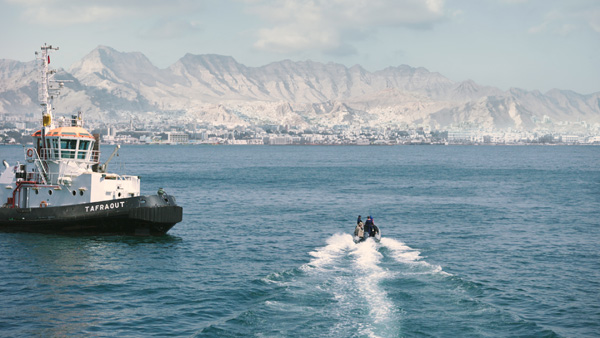 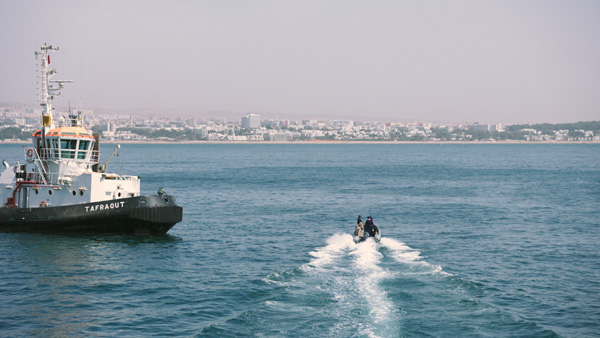 “But the newsreels showed damage that was too widespread to recreate practically. So, we used a combination of techniques to recreate the scene as it looked in the archival footage, taking advantage of our building research of contemporary Nairobi. The sequence was shot with green screens positioned on set to allow us to build set extensions replacing the views down the streets. A LIDAR scan was captured of the real set to use as a base for our digital work portraying the damage and debris.”

For the US battleship, the USS Cole, they also chose as realistic, in-camera an approach as possible. As a base, they shot a large frigate, out on the water. Although it was quite a bit shorter than the USS Cole, it had the same height and its design formed a sound base for them to work from. In terms of realism, it made a big difference in the final result to work with a real ship on the water. Not only was the water itself real, as well as interactions between the ship and the water, but the actors were walking on the correctly angled surfaces of the ship's deck, which is difficult to recreate digitally with footage shot separately on a stage.

Depicting crowds was an important task for certain scenes. The wide shot of the New Year's Eve celebration at Times Square was an example of their approach, which used a mix of CG crowd elements and filmed 2D crowd elements used as tiles. “We shot on location in Times Square around 3am, when we could control the area,” said Aaron. “We had about 60 background actors that we filmed in various configurations around the main focal point of the frame. 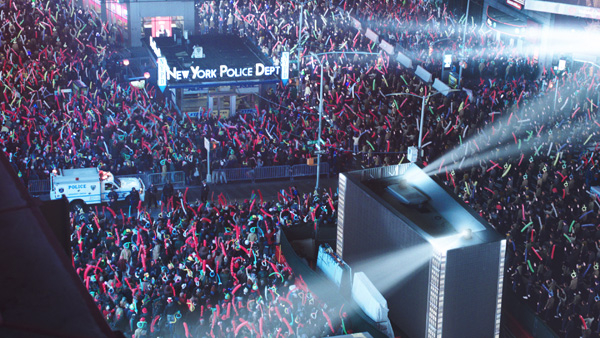 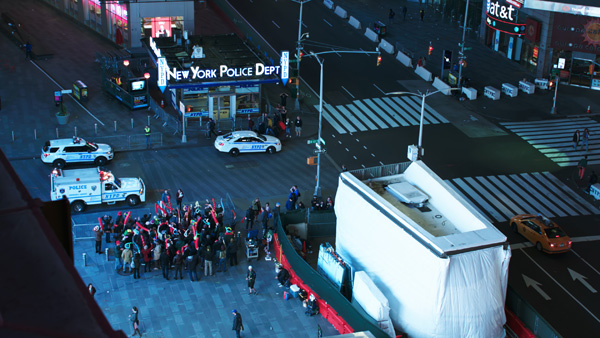 “The crowd would need to be dense in the final image, so we kept our 60 extras in a tight cluster and shuffled them into as many positions around the street as was practical. Then in post, our CG team created a group of about 12 unique Time Square revellers, randomly dressing them in mixtures of wacky '2000' sunglasses, balloon hats and pom-poms, and used them to fill in all the gaps our real actors couldn't fill.”

The team valued the opportunity this series brought to be so closely involved with the production before and during the shoot, and being part of a collaborative filmmaking effort between production and post. An especially good example of this was collaboration between the production design team and the VFX team on the World Trade Centre. Because Manhattan has no similar building today, the set builders recreated the Centre's footprint at the ground floor level inside a very large studio.

Relying again on research and reference photography, Phosphene then needed to digitally extend this upward to include the pillars, lift and mezzanine level. “Since so much of the VFX work on the show was architectural in nature, we used V-Ray throughout 'Looming Tower'”, Aaron said. “It produces naturalistic renders of the various materials and mixed light sources that our compositing team could further refine in Nuke.” 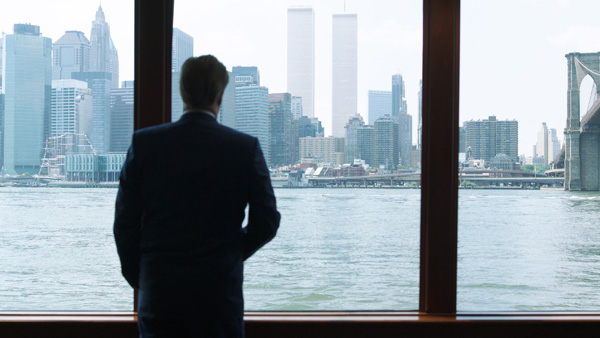 Aaron believes that opportunities to collaborate in ways like this are part of the merging of viewers' expectations for film and for TV, which until recently have been rather different. Nevertheless, the time restrictions of episodic TV production haven't gone away. So teams need to take a more efficient approach to planning to avoid wasting time and resources during execution. It calls for experienced teams who can distil what they know into a very tight, versatile operation to get projects done on time, and for willingness and agility to try new innovations that will yield better results in less time.

As a formal way to record and distribute notes from their shot and asset reviews, the team at Phosphene use Shotgun for project tracking. VFX producer Steven Weigle said, “No tool takes the place of actually sitting down with artists and talking through the work, but because we we work against tight television deadlines, we need to maintain a schedule and structure over the life of a project. Shotgun extends face-to-face communication and means we can monitor that our team is working on the right priorities, and hitting all of the feedback from our supervisors and the clients.

“From a producer's standpoint, one of the big challenges in embarking on a new project is that every show tends to have unique tracking requirements that need to be identified and managed. Put another way, part of making a show is first learning how to make the show. Databases like Shotgun's include flexibility to customise fields and organise relationships on-the-fly, so we can start fully prepared but knowing that as the show evolves, the tracking can evolve with it."   www.phosphenefx.com