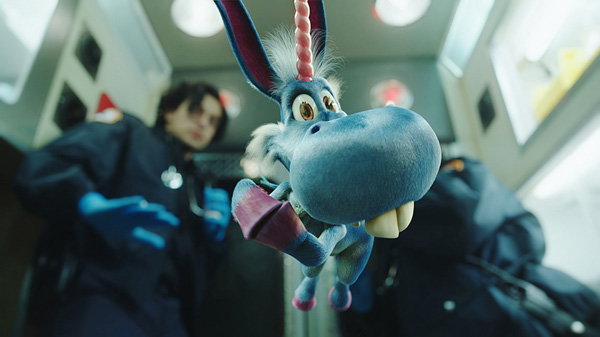 axisVFX, the visual effects branch of Axis Studios in the UK, has been working on 'Happy!', a television series showing on SyFy based on the graphic novels by Scottish writer Grant Morrison and illustrator Darick Robertson.

'Happy!' is a live action drama, infused with dark humour and moments of extreme violence, about an alcoholic hitman and former police officer, Nick Sax. This dubious hero joins forces with an imaginary 3D-animated, winged unicorn called Happy to find and rescue a young girl kidnapped by a deranged Santa Claus.

Axis was responsible for developing concepts, animation and final rendering, ensuring that Happy, playing a lead role, felt believable, photoreal and truly part of the show’s world. Appearing in about 100 shots per episode – 900 in total for the series - Happy receives more effort, attention and screen time than most any other CG character starring in a live-action show. 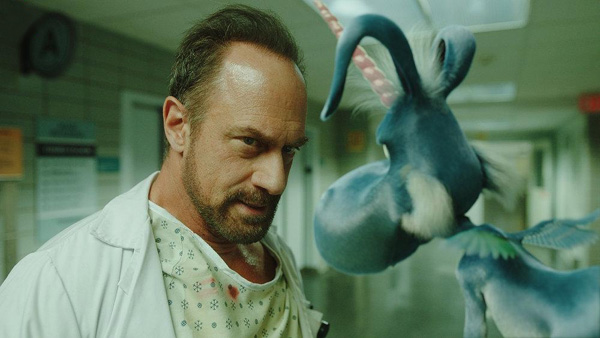 axisVFX worked with the support of Axis Studios' three sites across the UK in Glasgow, Bristol and London. All teams collaborated with the show's co-director Brian Taylor and producer Patrick Macmanus to develop and create Happy as a full CG character throughout the eight episodes of the series.

As there were no actual precedents among earlier TV shows for either Axis or the director to refer to, they focused on the fact that Happy is a main character and, therefore, was going to need as much attention to detail as any other cast member. “He is in a happy place somewhere between photoreal and cartoony,” said Grant Hewlett, co-founder and VFX supervisor.

From Comic Strip to 3D

“Taking him from the comic into the real world involved working with the director Brian Taylor over a period of many weeks, going from concept sketches to character sheets and teasing out all of the nuances that were going to help Happy express as a character.

“Once we were satisfied in two dimensions, we started to move on to what Happy looked like in 3D, starting with a basic model we used to explore his volume and what he looked like from many different angles. This stage is when we start to see how much artistic licence the concept artist has employed. An example is Happy’s teeth or head, which can appear enormous from some angles. After this rough form stage we moved into more and more detail with Brian – styling the hair, hooves, face tufts and the candy horn, which proved unexpectedly hard to get right.”

Achieving his photoreal look relied mainly on his very fine, soft blue fur. Its effect is iridescent, sometimes reflecting so much light that he almost glows. Creating realistic animal fur is often challenging for 3D animators because of the complex way the fibres interact with light, making it difficult to control. As Happy is mostly fur they decided not to rely on HDRI for their primary light source. Instead, CG supervisor Ross Gilbert and his team built a custom light rig that helped them maintain a consistent look for Happy. This also helped with integration because the compositors were able to balance individual lights with relative ease. 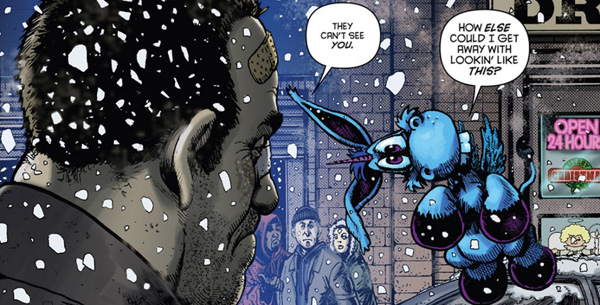 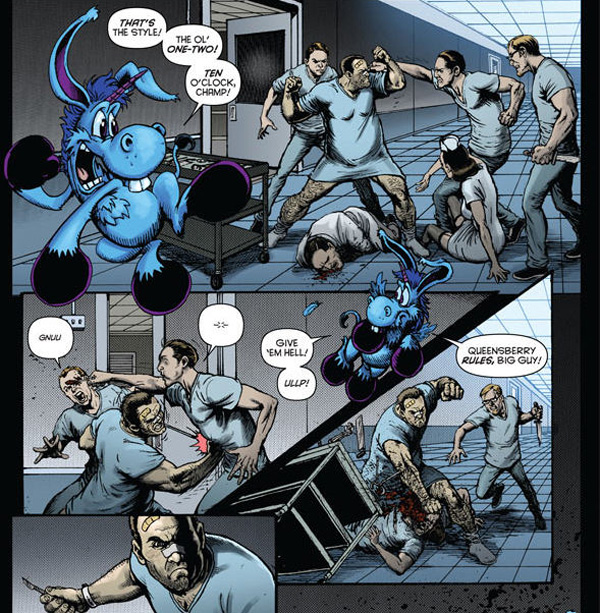 Ross said, “The look of Happy’s soft looking fur was due to the thorough groom versioning we undertook with Brian, teamed with the style produced by our lighting and comp team.The iridescent look of both the fur and wings was something Brian brought as a reference early in the process. It's a cool idea as it creates a level of realism and magic often found in nature's most interesting creatures.

“When designing Happy’s fur our brief was to keep it short and glossy, while retaining his cute and strokable feel. From Houdini 16’s new fur system we use custom Axis tools for grooming, fur deformation and shading. Building on those, we have bespoke optimization tools for Happy and Co, buying us time to refine our renders. When we encountered some challenges on longer hair, due to Happy’s highly flexible cartoon style animation rig, we had to create extra solutions for resolving intersections and allowing artist control on top of the existing dynamics.” 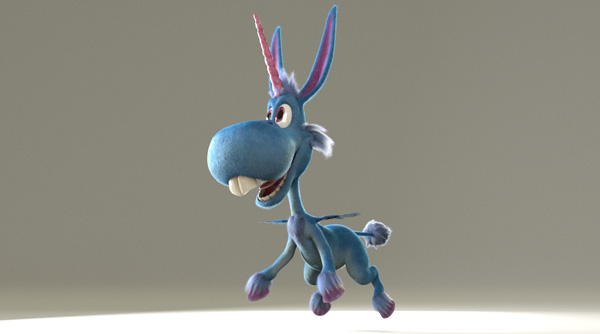 The production's concept art combined with Darick Robertson's illustrations for the 'Happy!' graphic novels gave the Axis team plenty of clues for Happy's design, build and looks, but those sources couldn't help much for the animation or indicate how he moves through Nick's world. Friedl Jooste, animation supervisor, said, “First we had to define how cartoony he would be as far as his motion goes, so it took quite a bit of experimentation with motion tests before we started shot production.

“The movement would first be defined by what he had to do in the shot - what the intent was, what he was saying and so on. If a shot was more light hearted, then we had a bit more room for big cartoony moves, where if the tone was more serious we would tone it down so that it would not distract from the emotion of the shot. 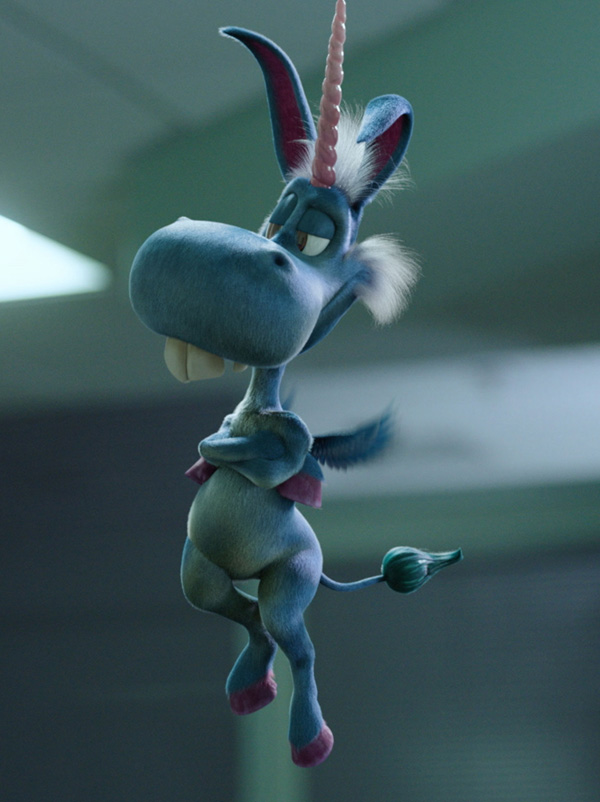 “For reference, we first looked at a bunch of 2D shows and films – lots of classic cartoons, like Looney Toons, 'Who Framed Roger Rabbit', all the good stuff! There are also a couple really great 3D animations that have been done in very cartoony styles like 'Hotel Transylvania', Peanuts, the 3D Looney Toons, but ultimately we still had to take what works for Happy and make up our own set of rules.”

All the physical motion was done in Maya - “Maya 2016 Service Pack 6 to be specific,” Friedl said – but throughout production, they had to make the emotion and intent their priority and ensure these always came across clearly. “All the extra bits in the body could very easily distract from that, so we had to find ways of posing him to make sure his silhouette was always nice and clear,”Friedl said. 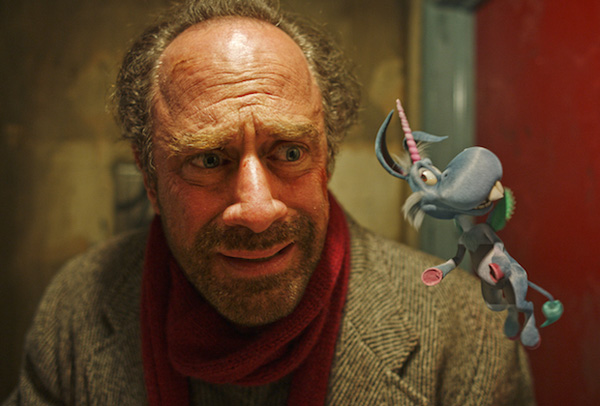 “The most important parts were the body and the head. We found in a lot of cases we could do a first pass with just those, and then afterward figure out what to do with the legs, then the tail and then the wings. The wings were pretty easy since we knew they always had to simply be fluttering away, really fast. The horn on his head was also pretty easy since it was rigid and also helped create a nice, clear line of actions in his poses.”

Compositing was also critical for the project. While the performance was at heart of Happy's personality, if we were to experience his presence in the same way and to the same degree as Nick Sax does, integrating Happy accurately into the live action was essential.

“We had a lot more interaction between CG and plate than we thought at first,” Ross Gilbert said. “For interactive lighting, the supervisor would make a call per shot on whether to handle it in 2D or 3D, case by case. This was because our client had a breakable rule about whether not Happy should cast a shadow or not. 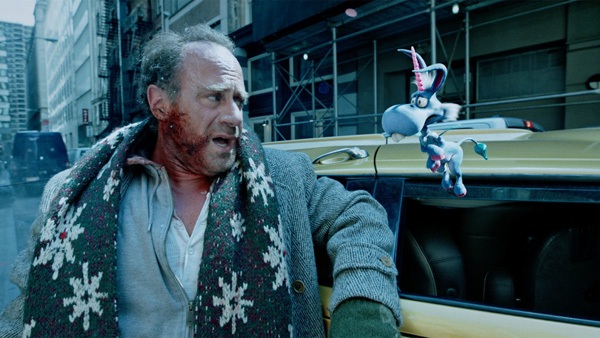 “When a shadow was called for, we would, in turn, make a similar decision about whether to use 3D geometry or 2D tricks for convincing integration. We wrote a utility especially for Happy! That produces very simple, combined output from our integration passes - AO, shadows p/light, shadow reflection and normal reflection. This meant that whenever Happy touches something, all we need is matchmove geometry for that area – resulting in a shadow straight away.”

Though not able to visit the sets themselves, the team was supplied with very good data from set in the form of photogrammetry and HDRI, along with lighting reference plates, grey ball images and so on. But these references were not always as favourable in terms of the story as they would have hoped, and so the artists often made up lighting that better enhanced Happy and his appearance on screen. 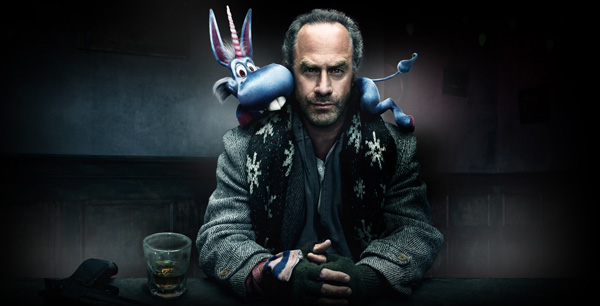 Ross said, “We use Nuke and proprietary tools for our throughput of compositing data. For Happy we built a fully inclusive template, which the artists could then extend per shot. On several occasions we were required to pick up DMP/cleanup shots on the fly, which went through our usual pipeline and then fed the CG compositors working on the Happy! template.”

Beyond the work completed for the show itself, the team also lead the production of three 20-second marketing spots and produced animation of Happy for a series of custom-made promos for the show as well as an AR app, which enables users to see the character appear in the real world via their smartphone screen.    www.axisstudiosgroup.com