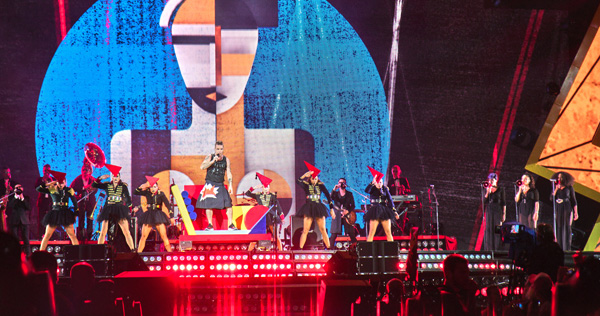 James Tonkin at Hangman in London captured and edited the backstage footage and live performance highlights on Robbie Williams’ 2017 European tour, recording the entire development of the tour from rehearsals through to live shows across the UK and Europe. He talked to Digital Media World about the cameras and supporting gear that made this project possible, and his techniques for keeping the equipment to a minimum while enhancing the visual experience he delivered to fans.

The main cameras he used were the Blackmagic Design URSA Mini Pro and URSA Mini 4.6K. James has a huge amount of experience following bands on tour, having worked on the road and behind the scenes for performers ranging from Duran Duran to AC/DC, Coldplay and, on an extended project completed last year, the Rolling Stones. 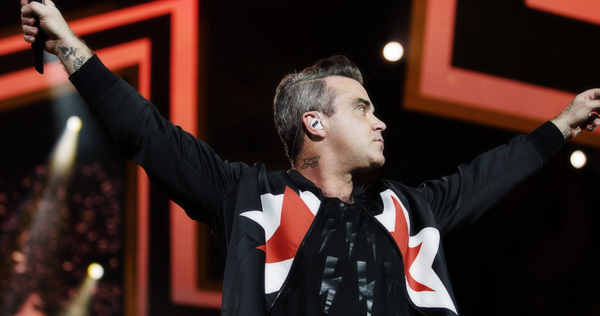 James said that for this year's Robbie Williams tour, the URSA Mini Pro fitted his specific touring requirements very well. “Not only did we have to turn around short edits for social media as we toured, but we also had to factor in the possibility of making a longer form documentary at the end of the tour,” he said. “Because of all that, whatever I shot with needed to be compact, reliable and able to handle the rigours of touring.”

He also commented on ways that the capabilities of modern cameras are changing how photographers approach shooting content for multiple purposes. For example, social media footage seldom needs to be at a higher resolution than 1080p but producers expect material recorded for documentaries and other long form projects  to be at least 4K. In the future, expectations may be higher.

“When shooting well-known performers, you can't anticipate what viewers and filmmakers will value in the weeks, month and years ahead,”said James. “Everything we shoot has potential, so we record everything at the best quality possible. New cameras, including compact, affordable models like the URSA Mini, are built to shoot footage resembling film quality anyway, and we want to take advantage of that.” 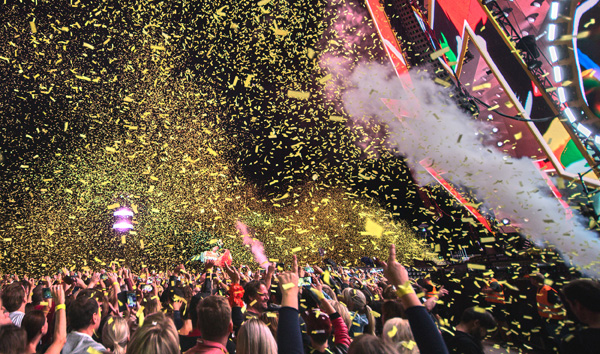 While on the Rolling Stones tour, which they worked on starting in January 2014, James learned how to be fit and prepared at any time to capture interesting behind-the-scenes, back stage moments, fan interactions and so on, and how to choose gear that will work in all scenarios, always at top quality. “Having worked with the band since 2013, we wanted to use all the time we had available to shoot whatever might be useful. Also, owing to the resolution, we have been able to extract very high quality stills from the video. Some cameras are better for this purpose than others, but the Blackmagic URSA Mini Pro and the RED cameracan be used this way quite easily and it means I don't have to carry a stills camera,” he said.

“We were a two-man team and trimmed down our equipment to what was necessary and reliable. I did the shooting, directing and the grading in post. My partner was handling all the editing and second camera, as well as the technical backup, optimising processes and equipment from place to place. At that time I was using the URSA Mini 4.6. It was ideal – light and easy to use. As long as I had a battery, I was prepared to shoot just about anything.”

The URSA Mini Pro was released since then, and has the advantage of a built-in neutral density filter. ND filters allow a photographer to control the exposure in an image more easily, reducing the amount of light passing through the lens without changing the colour of the scene. They are especially useful in bright light conditions to help prevent overexposure, and also to control exposure when using a wider lens to create shallow depth-of-field to highlight a subject.

Shifting ahead again to the Robbie William tour, James carefully designed a gimbal rig set-up for the URSA Mini Pro, with a remote focus system for a 12mm Laowa f2.8 or Carl Zeiss ZE 50mm F1.4 lens, together with clean audio running from the camera’s top microphone. James said, “The remote focus is essential as the URSA Mini Pro doesn’t have autofocus capabilities, nor do the lenses I was using with it. The remote focus meant we could work pulling focus from the gimbal handles, allowing much more control than just setting a fixed focus on the lens. It also meant we never needed to touch the lenses themselves while they were on the gimbal.” 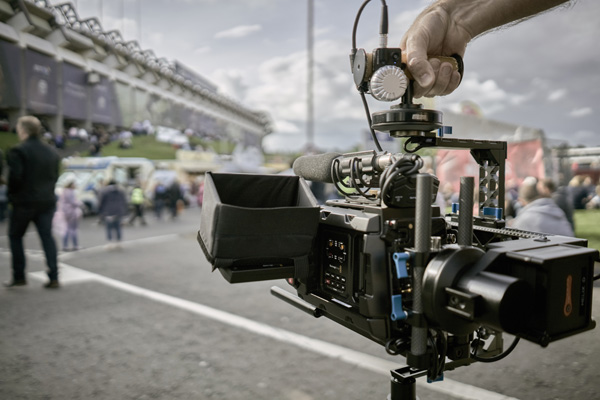 He was using the Letus Helix gimbal rig, a compact three-axis modular camera stabilizer system. It uses the optical centre of the camera both for balance and for image stabilisation. Its main qualities are its continuous 360 roll motion and tilt movement, and it suits a one-man operation because its bottom is flat and doesn’t need a stand.

Commenting on this set-up, James said, “I like the Letus Helix because it is small, robust and very quick and easy to assemble and take down, which made it good for shooting on the stage or any place when I would have to be ready at short notice to either capture something or pack up and change location. The URSA Mini Pro’s size and weight matched the gimbal perfectly.

“I even balanced the rig so I could use the built-in screen to make set-up quicker and avoid adding extra hardware and weight. I hadn’t previously relied too much on the camera’s focus peaking, but it proved invaluable here because I often worked alone on stage. I would walk backward to follow Robbie and adjust the ND filters while moving from inside to outside in one fluid shot.”

“The 12mm Laowa f2.8 is a very versatile lens on a gimbal because its field of view is incredibly wide. When mixed with its close focus of only a few centimetres and f2.8 aperture, that field of view makes it useable in so many different shots and setups. The 50mm Carl Zeiss is my current favourite 50mm prime for portrait shots. I normally kept it to f2.0 but could push it wide open to f1.4 for very low-light, under-stage shots.” 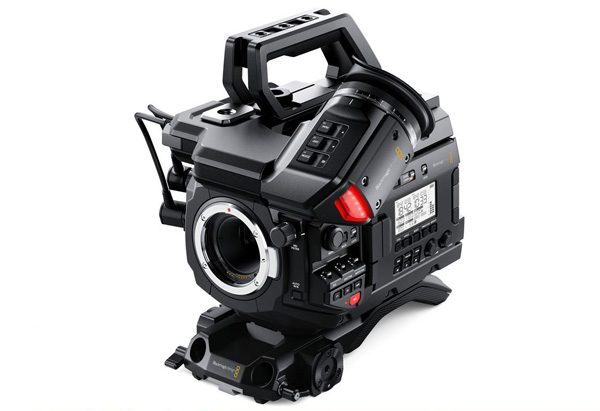 An URSA Mini 4.6K, used handheld, complemented the gimbal arrangement on tour and was fitted with EF lenses, as well as a Blackmagic URSA viewfinder for concert shooting and general backstage coverage. James especially likes working with the viewfinder, and learned its value in particular when shooting in Argentina, where the sun is very bright and the environment is full of distractions.

He said, “The viewfinder helps cancel out these distractions. Its design integrates it especially tightly into the camera body so that the image maintains the same horizon level as the camera better throughout the shoot, and makes me feel connected to the camera. I'm continuously aware of stability and focus in the shots.”

“It also displays an accurate representation of the finished shot, especially since I was using LUTs to approximate the graded footage. On this occasion I just used standard LUTs, but more recently I have been creating sets of transform LUTs for all the cameras on multi-camera shoots, adjusted so that all operators are seeing the same image in their viewfinders for any of the cameras.” 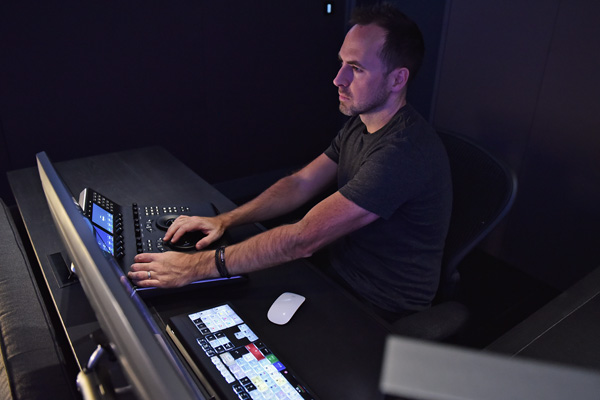 James Tonkin at work on the Resolve.

With improvements to its performance and handling of camera formats, Blackmagic Design DaVinci Resolve is now a major part of Hangman Film’s production and post-production workflow.  “I’d offload all of our material into Resolve for review each night, adding corrective LUTs and correcting aspect ratio if we’d filmed in anamorphic. We’d then create proxies to work from and store on portable bus powered drives,” James said. 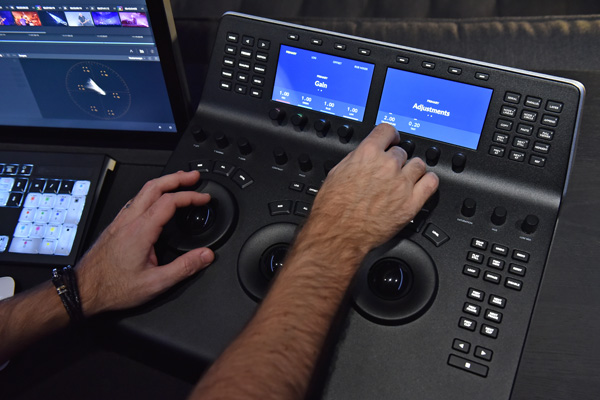 “For post-processing, the hub was Resolve. We sometimes did some editing in Premiere Pro or FCP but the Resolve was always the central location for handling formats and transcoding. While sitting in Manchester station waiting to take a train back to London after a show, I was able to quickly proxy ten minutes of 8K and 5K footage into 1080p H.264 files on a five-year-old laptop, and then upload via 4G back to the editor so we could meet an editing deadline.

“The fact that we were travelling at the time didn’t stop the process of delivering the files where they needed to be, or our ability to work with them. This is exactly what software should always be, a tool to enable your work and creativity, regardless of where you are and what you’re running it on.”  www.blackmagicdesign.com