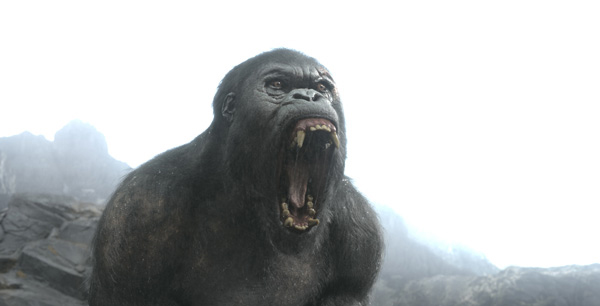 Framestore created jungle environments, digital doubles and detailed creature animation for over 700 shots on ‘The Legend of Tarzan’. The movie is based on the novel written in 1912 by Edgar Rice Burroughs, whose main character is the son of an English nobleman, left orphaned in the African jungles as a small child after his father was shipwrecked, and raised by apes. Digital Media World spoke to VFX supervisor Alec Pejic and animation supervisor Kevin Spruce about the project.

Framestore started work in the very early stages before principal photography got underway. Like most projects it was critical to be involved from pre-production. Alec Pejic said, “I started half way through the shoot, which definitely helped – because Framestore was looking after the main ape characters, we had extra planning and testing to do before the cameras rolled.

“We also needed enough time to work with the director David Yates, production VFX supervisor Tim Burke and production team to achieve results on set that made everyone's work easier in post, and to develop the tools we would need.”

At Leavesden studios where the jungle sequences were shot, the production had designed elaborate sets representing African settlements and villages, and built physical jungle elements backed by bluescreen on three soundstages. To locate the setting more realistically, Framestore needed to conceive, create and design a photoreal jungle environment in 3D. 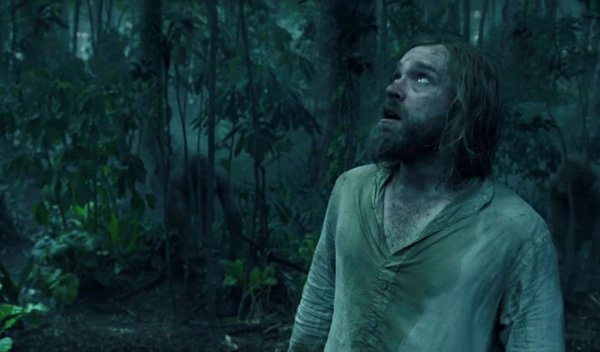 ”Framestore has worked with David Yates and Tim Burke before, on several of the Harry Potter films, and we continued the relationship on ‘Tarzan’, going on set a number of times to get a feel of what the different sequences were like,” said Alec. “We also recorded as much data there as possible - photos, texture details, lidar scans, measurements, HDRIs, lighting positions, camera data... you never know what may save your day six months down the line when you face issues in post.”

They used their plates captured on set to base concepts and design decisions on, combined with visual reference of environments found in Gabon, West Africa, which the team also used to build up a library of around 7,000 indigenous plant species. At first, that number of species was overwhelming, but they decided that the Leavesden footage would be the basis of their work. They replicated shots of the production’s jungle exactly in full CG, and then relied on the plant library to get more creative and improve the looks.

“We were extremely lucky to have access to the sets, plus thousands of reference photographs of the jungle plants and foliage at our disposal and, importantly, we also had Framestore's R&D team behind us,” Alec said. “These were the key components in dealing with jungle on every level from layout to lighting. Before we even set foot on set we'd done some research into what species were in the Gabon jungle - and found that there are several thousands of combinations as well.” 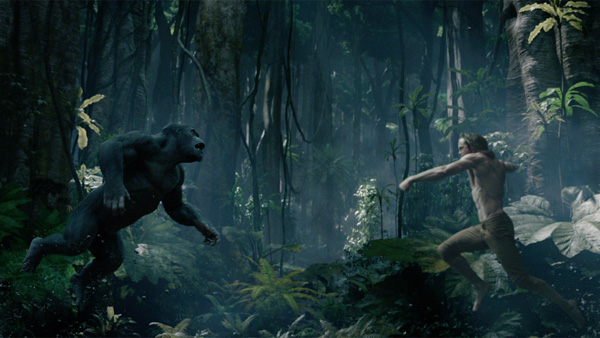 Identifying the most recognisable trees and plants on set, they built a huge 3D library that the artists could experiment with, using lidar scan of the set as a guide to how the various plants were distributed. A tool was built that would replicate what was constructed on set when passed the equivalent variables. The environment team used the tool for mid and background jungle extensions but plants in the foreground were generally art directed, making hand placement unavoidable.

The next level was the vine dressing and additional foliage around the trees, including foreground elements. Alec said, “A lot of that work had to be procedurally placed with the tools we built for the project and then passed to the animators to make it work within their animations. In turn, whatever foliage was affected by animation would be passed to our FX team for further dynamics. Meanwhile for the distinctive jungle lighting we had HDRIs provided for each shot with the usual gray and chrome ball references, so that we always knew what we needed to match to.”

The director wanted to stay close to the original story, in which William Burroughs' fictional race of apes, the Mangani, play major roles. The team at Framestore was responsible for creating, among a larger group, three of the apes as CG animated creature-characters that interact completely naturally with the live action actors. These characters are Tarzan’s adoptive mother Kala, her son Akut and a fierce male ape Kerchak. Their looks and performances required more of the close collaboration between the FX and animation teams.

The production team developed a full-scale model of a Mangani head and shoulders for Framestore’s creature modellers to reference. Though they also referenced real gorillas for authenticity, the artists had to be creative with the overall modelling because, as a fictitious species, the Mangani aren’t meant to accurately resemble real gorillas. To match the production’s model correctly, they had to be made less furry, with much more exposed skin, and more muscular. 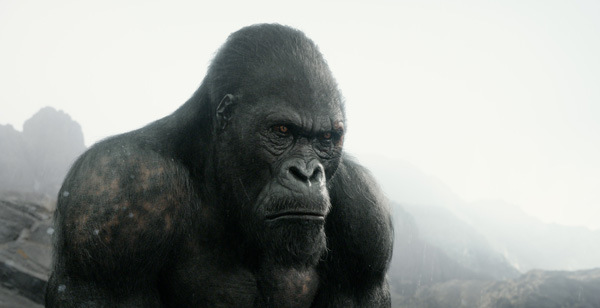 Animation supervisor Kevin Spruce, who led this part of the project, said the need for the apes to interact with live characters made their conception especially complex. The study of real apes included footage of gorillas and apes and visiting a zoo to understand how the animals use their whole bodies to communicate, paying particular attention to the eyes to convey complex emotions. Director David Yates was especially concerned about subtlety of emotion, and seeing the soul in the eyes.

Because character animation that needs to fit into a live action film is always a major challenge, an appreciation of David’s vision and the kind of movement he wanted to see from the Mangani Apes was critical. Stunt actors were performing on set on the shoot days, but they were all to be replaced with hand-animated apes, so getting a full understanding of the action, sequence, story and the style of movement was essential for the animation team to execute and deliver what was required.

“‘It was all about the eyes in Tarzan!” Kevin said. “We really had to scale our animation back a lot, and create the emotion through the subtle movements of the eyebrows or mouth. We wanted each Mangani character to have a very different feel and attitude. We completed a new eye rig to use on Tarzan that has many more controls than we historically had at our disposal. It allows a nearly perfect realisation of how the eyes would move, blink, squash and stretch. 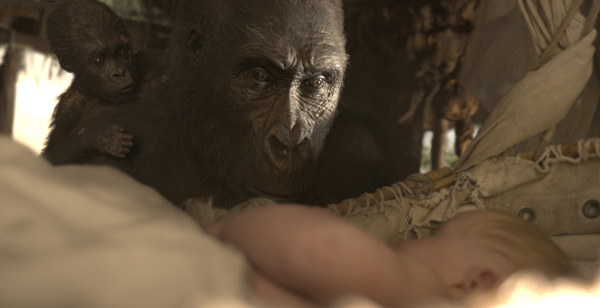 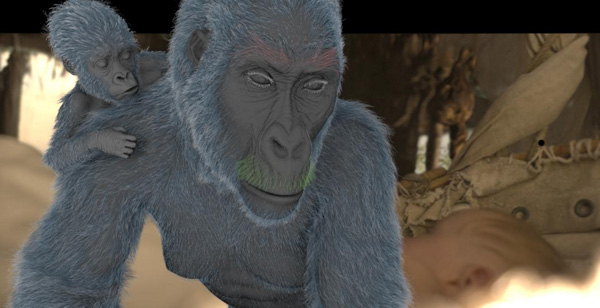 “We also used a lot of reference, such as studying eyes in slow motion to analyse what goes on when they change direction, for example. You start to understand and discover stuff you could never see at normal speed. But it’s exactly this that makes an eye look real. So we’ve tried to build this behaviour into our eye rigs and show our animation team how to use it to best effect.”

Stunt actors notwithstanding, motion capture wasn’t part of the production – as mentioned, the live performers were later painted out and replaced with digital apes. Obviously, their performances helped the other actors and gave them something to work with, but they were also very helpful for the animators, not to be replicated but to use as a guide to the character's interaction with the environment, their dynamics and the shadowing and lighting references. Alec remarked that nothing can give you better reference than what's already on the plate.

“The main challenge was to make them look real and create the illusion of a creature who is treating Tarzan as one of their own, without falling into the trap of making them act and perform like humans,” said Kevin. “There is a fine line between those two goals. It’s very easy to put a human motion-capture performance into a scene that everyone can relate to, but our client was looking for something more nuanced than this, which is why we went with key frame animation.” 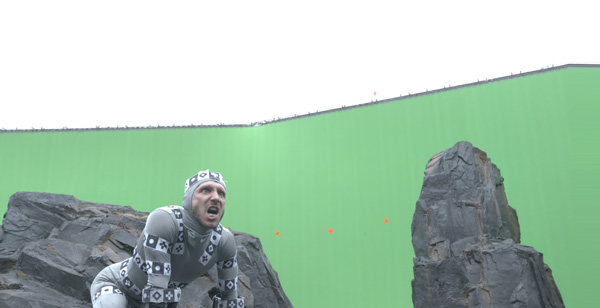 Framestore’s R&D team developed a new tool called 'Flex & Flesh’ in order gain the necessary control over texture and movement in the apes’ fur and skin, which involved simulating the loosening and tensing of muscles. Associated with this was a library of facial shapes, a hair filter and dynamic hair systems that the creature artists used to create 15 Mangani characters with varying fur colour, length and density, and contrasting patches of grey and smooth spots.

Alec said, “Flex is muscle simulation system using tetrahedral mesh generation to create volumetric meshes which can be set up to represent the muscular, and in special cases, the fat-based areas of creature anatomy.

“Flex also incorporates a method of paired attributes so you can preset loose and tense values which can then be keyed by auto systems set up by rigging, or manually by animators or creature FX artists. Flesh is a skin deformer. It is a very robust method for shrink wrapping meshes around collision geometry for skin slide and some folds." 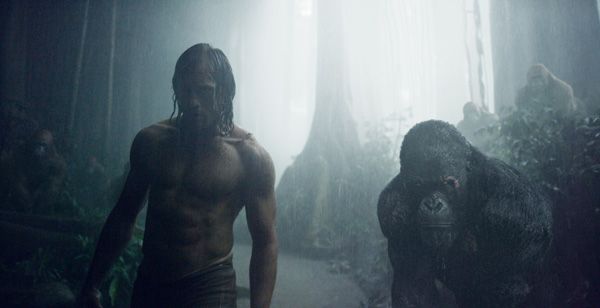 A scene with Tarzan and a group of Mangani apes in the rain, in which the apes’ fur stretches and moves according to each animal’s weight and muscle mass, brought some interesting challenges when calculating how the fur would move with the body movement dynamics. The artists then had to consider how that movement affected the rain water as it hit the fur.

Taking on the sequence that shows Tarzan swinging through the jungle involved working out how to emulate the speed and natural movement that the scene calls for. A request to make the action slow-motion added one challenge to that, and the fact that the scene transitions from bright sunlight to a dark, rainy scene also required progressive changes to the environment and lights. 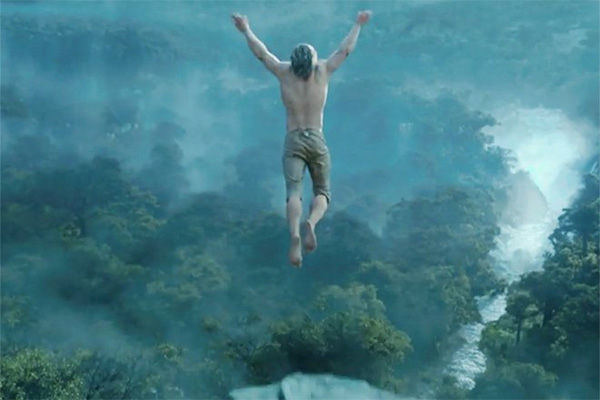 The team decided to re-build and fully animate Tarzan as a digital double, which gave them control over all of these factors wherever it was necessary. But it also made them responsible for the success of this scene, which recreates the vision of Tarzan that audiences everywhere have shared since the story was originally published.

All adaptations of Tarzan have his grace and strength in common, qualities that VFX supervisor Andy Kind helped develop at Framestore. To better understand how the body moves when swinging at heights and speeds similar to those in the sequence, the team studied ballet and circus performers.

After a pre-vis stage, which showed the exact movements Tarzan needed to make, the team set up 16 Red cameras on set in an array designed to capture the performance of Alex Skarsgård, the actor portraying Tarzan, at many different angles so that they could rebuild the geometry frame by frame. These cameras also recorded the facial performance used to drive their high-resolution digital 3D face, modelled and reconstructed from separately-captured lidar data. The artists could then expand upon the detail that had already been filmed on the plate, either by replacing parts of Alex’s body or extending the shot where needed, using portions or all of their digital double.   www.framestore.com