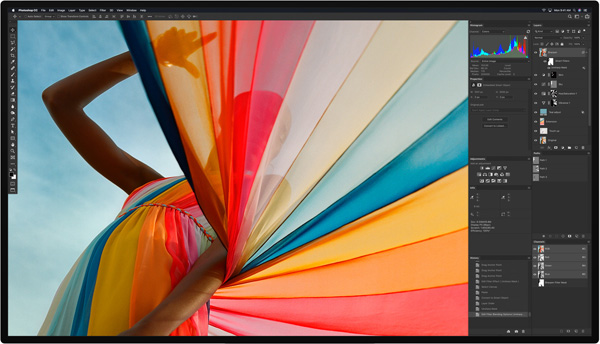 Recently Digital Media World visited the Apple office in Sydney to have a first hand look at the Mac Pro and Pro Display XDR. While checking over the Mac Pro was extremely interesting – you can read a review of it here – a chance to see the Pro Display XDR in action was exciting.

The display panel is made up of components, integrated to control and maximise image fidelity. The Retina LCD panel has 6K resolution and holds over 20 million pixels in 10-bit colour, and a custom timing controller synchronises pixel switching and LED modulation to manage the whole panel. A polarizer improves off-axis viewing at wider angles. But its main differentiating factor is the LED backlighting system with a 1,000,000:1 contrast ratio and up to 1,600 nits peak brightness.

Instead of going with a standard approach like OLED, Apple chose to develop their own 2D backlighting system, aiming for uniformity, sustained thermal and brightness performance and wide-angle off-axis viewing, and to avoid permanent burn-in. 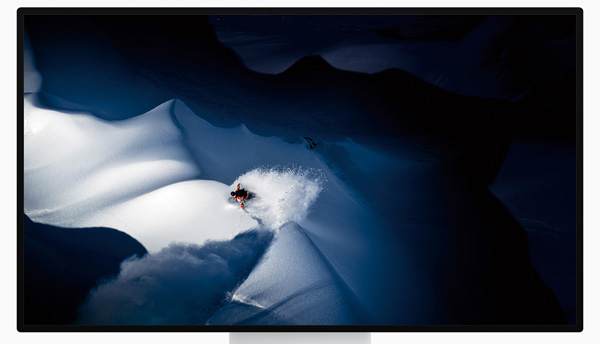 An LED panel diffuses light evenly across the display at the same brightness level, but the Pro Display XDR backlight uses local dimming based on 576 individually controlled LEDs that can show extremely bright image areas and deep blacks at the same time, resulting in the 1,000,000:1 contrast ratio.

The panel gets its name – Extreme Dynamic Range or XDR – from its brightness specifications. Maximum brightness depends on the image on the screen, but the display can support and sustain 1,000 nits for any image. It also supports 1,600 nits for highlights in up to 39 percent of the screen area if the rest of the image is under 500 nits. Furthermore, the reason Apple chose a 2D backlighting system is that LEDs, which are extremely bright, may cause light leakage or blooming when the LED zones are larger than the details of an image.

Apple says that the XDR system makes light shaping possible – that is, controlling brightness and contrast, and maintaining image fidelity across all images. The system, which hinges on the use of blue LEDs, is interesting. 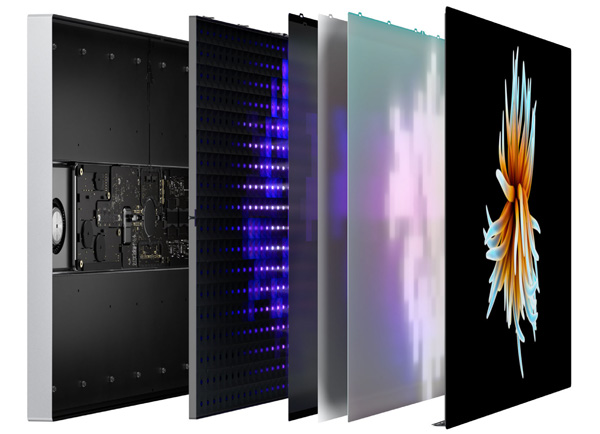 Blue LEDs are used because blue light, with a very short wavelength, produces a brighter light very efficiently. White LEDs can also be made from blue ones – a colour transformation sheet with hundreds of layers controls the wavelength spectrum that passes through, converting blue light from the LEDs into white light.

Each blue LED has an internal reflective layer and a specialised lens that direct and bend the light. A plastic cavity reflector layer on top of the LED system directs light upwards to reduce spreading, and another reflective film on the rear of the diffuser plate reflects light back into the cavity. Both layers preserve and improve uniformity, and meanwhile around the edges of the backlighting system, a light homogenizer uses a micro-lens array for colour and brightness uniformity.

Pro Display XDR has a 32-inch LCD panel with a 6K resolution of 6016 x 3384 pixels and density of 218 pixels per inch for a total of 20.4 million pixels. The combined size and resolution leaves space for tools and UIs, but can still show 4K content pixel-for-pixel. Supporting 99 percent of the P3 wide colour gamut, it is a true 10-bit colour depth panel capable of displaying over a billion colours, pixel-by-pixel across subtle gradients.

The wide viewing angle of 89° left, right, up and down applies to colour accuracy, as much as content clarity, and is achieved with a compensation polarizer that reduces off-axis light leakage more efficiently than a regular LCD. 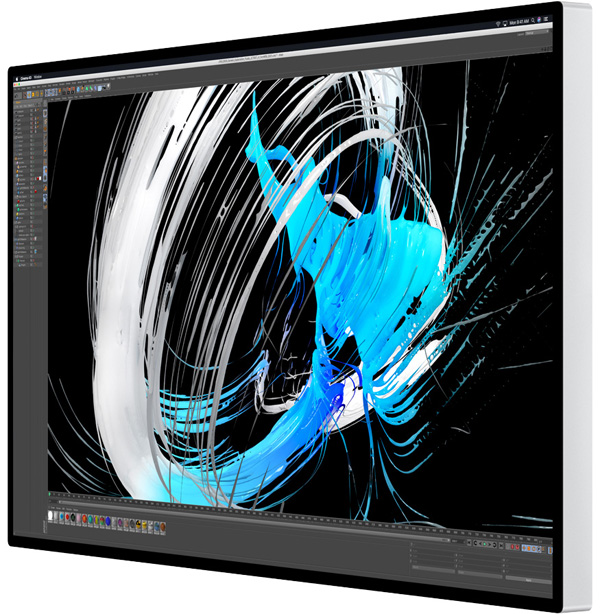 The standard cover glass has an anti-reflective coating against glare, and the nano-texture version, etched to produce a matte finish, scatters light reflections further, with a very slight impact on sharpness, colour and contrast. Pro Display comes with an Apple Thunderbolt 3 Pro Cable but to make sure the screen receives the necessary bandwidth it has to be connected directly to a Thunderbolt 3 port on a Mac, not daisy-chained through another device or hub.

LCD panels have precision timing requirements for their refresh rates, and therefore need a timing controller or TCON board to translate between video signals and the panel’s specific signalling. Each panel only supports a single resolution and timing and relies on the board to keep the signal uniform, regardless of the video frame rate or resolution. Because the timing and physical configuration has to be so precise, panels come from the manufacturer with the TCON pre-attached and wired.

On Pro Display XDR, Apple’s timing controller controls the LED and LCD layers of the display separately, treating them as two displays with algorithms to synchronise them into the final image. It also stores details of the factory calibration data (see below) for each LED, controls local dimming at about 10 times the display’s refresh rate to maintain the synchronisation, and monitors brightness to anticipate the blooming potential of the images on screen. 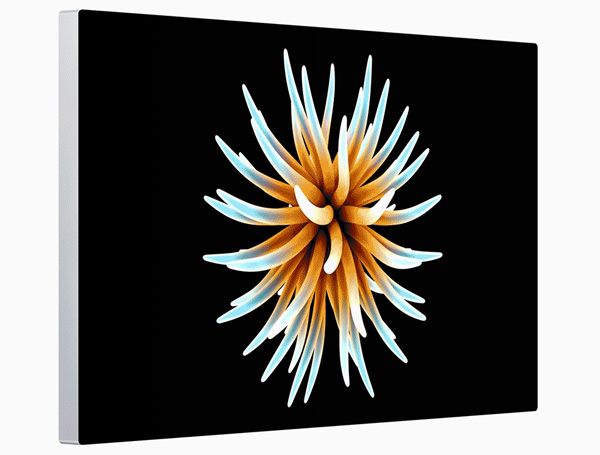 For work such as video editing, Pro Display XDR can adjust and set refresh rates to match the frame rate of a video for editing or viewing. Also able to detect patterns that may cause artefacts, the TCON optimises the display to minimise those effects.

Pro Display XDR units are factory calibrated in order to establish consistency between units, supporting workflows that use reference monitors at different stages of production. Calibration is aligned to the P3 wide colour primaries, which results in a larger colour gamut than sRGB and richer and more saturated colours.

Factory calibration is also used to give the display the ability to accurately reproduce the colour spaces media producers currently need to use, for instance, BT.709, BT. 601 and sRGB. Pro Display XDR can also work with content encoded in BT.2020, the colour space for UHD content, by accurately reproducing colours within its native P3 gamut and meanwhile preserving BT.2020 colour data through the workflow.

Pro Display XDR is compatible with several of Apple's devices at native 6K resolution – it needs to be a device with a GPU capable of supporting DisplayPort 1.4. You can also connect the display to a Windows or Linux PC equipped with a GPU that supports DisplayPort, but you need to check to make sure it will correctly render the colour spaces you need. With an SDI converter box such as a Blackmagic Design Teranex Mini SDI to DisplayPort 8K HDR, Pro Display XDR can be connected directly to a camera or other SDI source without a computer. The box can change reference modes, add scopes and overlays, and apply a LUT. 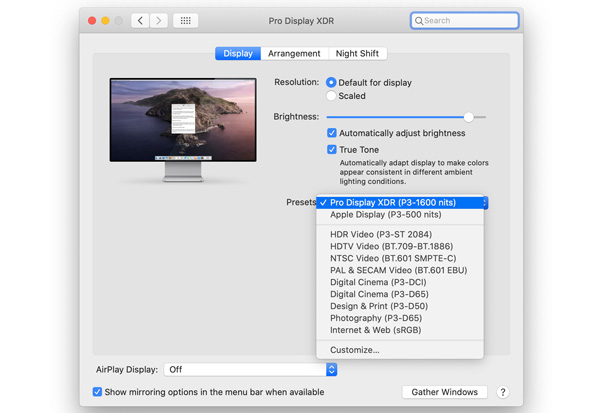 An important step when using Pro Display XDR to work on colour-critical content is setting the reference mode and following industry specifications for the viewing environment associated with a media type – some reference modes are designed to work only in specified conditions. When a mode is selected, the display relies on its calibration algorithm to adjust its colour primaries, white point, transfer function (gamma) and luminance. Switching between reference modes is quick, but if you need to switch regularly between several modes, you can configure the Displays menu to make them easier to access.

The screens’ standard built-in reference modes are available as presets for applications ranging from a home office to video for broadcast and cinema, to print. Some that are especially useful in modern workflows support HDR video, configuring the display for 4K or UHD production workflows up to 1000 nits, and Digital Cinema projects, which configure the display for motion picture and post-production workflows using the P3 theatrical colour space and varying digital cinema white points for viewing. There are also lots of other viewing modes for earlier HD and SD video standards like HDTV and NTSC, photography and web. All of the modes support industry standards. 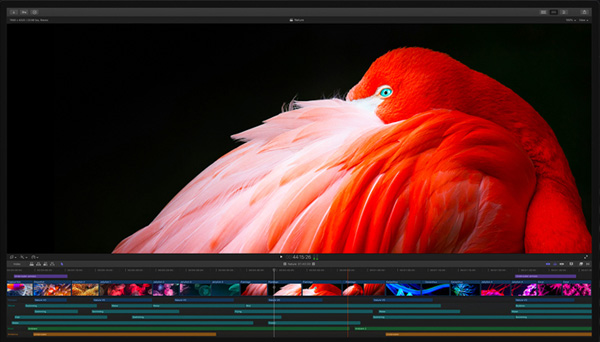 Normally, users can only work with one type of media at a time on monitor. In other words, monitors configured to work with HDR media may display SDR media incorrectly. To overcome those barriers, Pro Display XDR works with the colour management capabilities in macOS Catalina, which determines the playback and display of HDR media on Pro Display XDR. Content that exceeds the brightness capabilities of the active reference mode will be either clipped or tone mapped by the media frameworks built into the operating system. These frameworks also process Dolby Vision dynamic metadata and map Hybrid Log-Gamma (HLG) into the PQ transfer function during playback.

If you have needs for a specific workflow, two upcoming functions for Pro Display XDR relate to customising displays. Apple expects that in one of the next versions of macOS, it will be possible to create custom Pro Display XDR reference modes by selecting from different colour gamut, white point and transfer function options, and save the custom reference modes into the display. Also, because some workflows include display recalibration to maintain screen-to-screen accuracy and consistency over time, support for in-field recalibration of the display will be available soon.   apple.com/mac