The new NVIDIA Studio platform combines RTX GPUs, a specialised NVIDIA Studio Stack of SDKs, and dedicated Studio Drivers, and has undergone hardware and software testing for creative applications and workflows. It was developed for online and studio-based artists whose work is based on high performance PCs.

The laptops are built with the new Quadro RTX 5000, 4000 and 3000 GPUs, as well as GeForce RTX 2080, 2070 and 2060 GPUs. The RTX GPUs accelerate content creation for tasks ranging from video editing to 3D rendering. Quadro RTX 5000-based laptops include 16GB of graphics memory, enabling workflows involving several applications and the use of large 3D models, which would otherwise not be possible without a desktop computer. 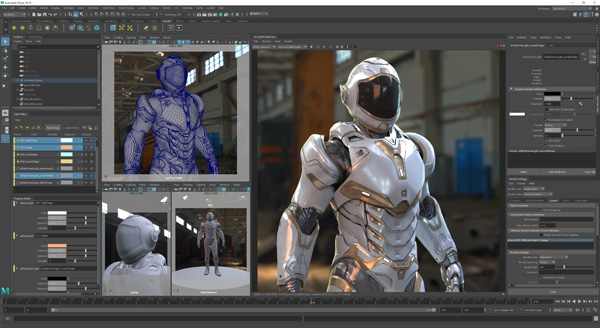 Many of the new laptops are also built with 4K precision displays and NVIDIA Max-Q, a combination of thermal and electrical design and software included to make laptops thinner, cooler and quieter.

If using the CUDA-X AI platform, creative app developers can use AI to automate repetitive tasks such as upscaling images, tagging photos or colour matching videos. CUDA-X AI is a collection of software-acceleration libraries built on top of CUDA, NVIDIA’s parallel programming model. The libraries optimise hardware for deep learning, machine learning and high-performance computing and also work directly with NVIDIA Tensor Core GPUs to accelerate the development and use of AI-based applications.

They are integrated into deep learning frameworks like TensorFlow, PyTorch and so on, but also the main cloud platforms including AWS, Microsoft Azure and Google Cloud. They can also be deployed on the NVIDIA GPUs installed in desktops, workstations, servers and cloud computing.

NVIDIA Studio Drivers have been tested against creative content workflows based on multiple applications and multiple revisions of the major software from developers including Adobe, Autodesk, Avid, Blackmagic Design, Epic, Maxon and Unity. This means that the latest NVIDIA Studio Driver, available now, supports the up to date releases of applkications including Autodesk Maya 2019, Autodesk 3ds Max 2020, Blackmagic Design DaVinci Resolve 16 and Daz3D Daz Studio.