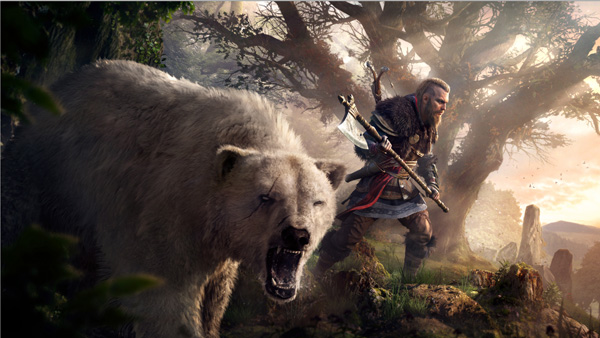 The action adventure role-playing game ‘Assassin’s Creed: Valhalla’ is an immersive Viking fantasy developed by Ubisoft that takes place in the context of England’s Dark Ages. According to the story, during the 9th century AD, a Viking raider named Eivor and a clan of Norsemen are driven from Norway by endless wars and dwindling resources. Eivor leads his clan across the icy North Sea to the richer country of England’s broken kingdoms. Their mission is to establish a new permanent home.

Players take the role of Eivor and take action to raid the clan’s enemies, advance their new settlement and build political power in the quest to earn a place among the gods in Valhalla. The game’s imagery plays a major part in supporting the story, communicating a sense of realism, drama and history to make sure the players engage as far as possible with the game.

Digital Media World talked to Syarah Mahmood, an Associate Lead Artist on the Assassin’s Creed: Valhalla World team at Ubisoft in Singapore, about what it takes to create the game’s art, giving players a visual experience and a world to explore. 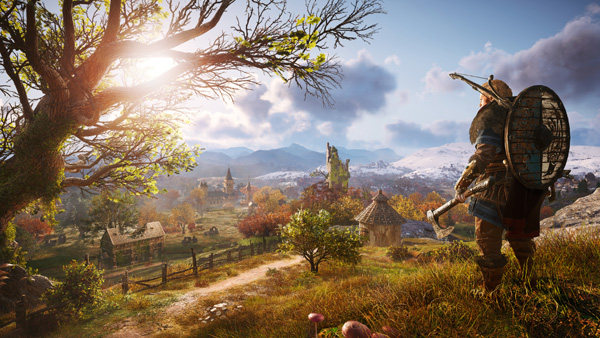 From the start of every project, the ability for players to lose themselves in the game is one of the team’s main goals. This quality goes beyond realism, although realistic looks and authentic detail are an essential part of it.

Syarah said, “As an associate lead artist, my role is to guide the team to create environments with strong, memorable themes. Together, we carry out the art direction and bring out the Viking fantasy. We try to make the locations as inviting as possible to encourage player exploration. Personally, I work very closely with art and design directors, level designers and quest designers.

“For us, game development is an interdependent process that requires all the different departments – QA, Audio, lighting, Gameplay, Programming and many, many others – to work together and solve problems creatively. What makes this work is that the team is very open to feedback and willing to bounce ideas off each other.” 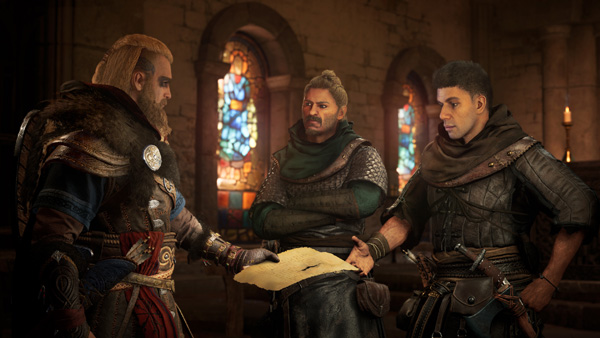 Throughout the production cycle, many iterations are made on a game, which is both exciting and challenging. As well as focussing on the smaller details, they work together to make sure all artists are aligned to the bigger picture and overall artistic direction.

“Like any kind of creative work, we face limitations in the design and tools, of course – but that’s not necessarily a bad thing!” Syarah said. “We understand each other, and the challenges we face together are quite intriguing. In fact, overcoming them and trying to get our crazy ideas into the project – against all odds – might be my favourite part of working on any game.” 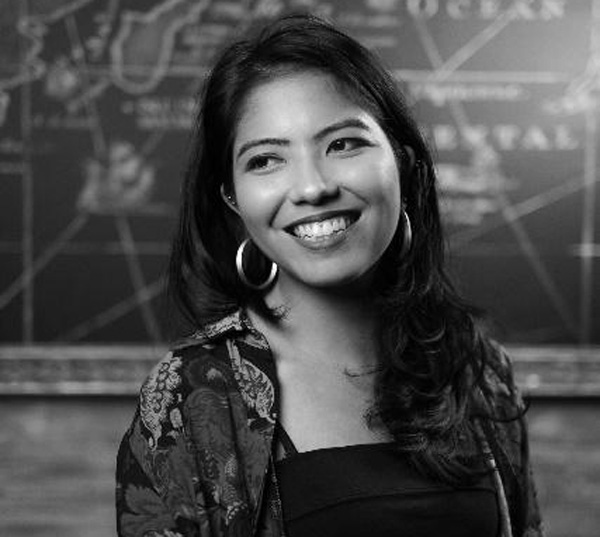 The Assassin’s Creed franchise is recognised for its exploration of pivotal moments in history. At the start of the project, a core team of directors and developers went on a discovery trip to Norway, Denmark and England to get an understanding of Viking history. They experienced first-hand the vast landscapes and environments that Syarah’s team drew inspiration from.

Under the creative vision of Brand Art Director Raphael Lacoste, research and concept art exploration was undertaken in pre-production to define and refine their ideas. Taking all of this research and further expanding on it through discussion with the local teams, they can establish the key pillars and themes that define the game’s story. “Because of the scale of the project, and the size and variety of the game’s maps, everyone had a role to play in the research for the various regions,” said Syarah. There are five complete maps for the game ranging over Scandinavia and England, which players use to track their progress as Eivor. 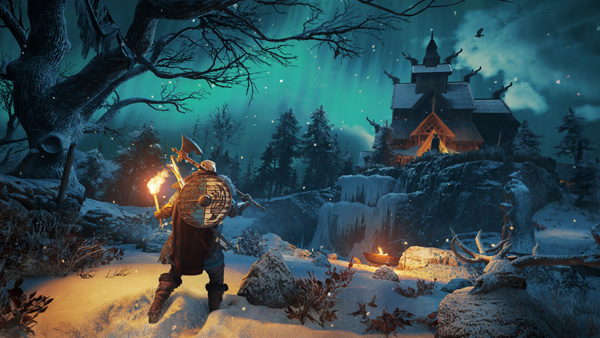 “For example, in Singapore, one of the regions we worked on was Northumbria in England. Between all of us – quest designers, narrative designers, level designers and artists – we built a research foundation for sharing knowledge and ideas with each other to produce Northumbria’s locations and gameplay in ways that are memorable and feel unique. We also worked with a historian who guides us as we build up the lore and history. Because this game is set during the Dark Ages, we had room to fill in the gaps in history and come up with really creative scenarios.”

The locations must be distinctive to help the player navigate the world and encourage them to explore. One of them, for instance, is a village called Hemthorpe that the Vikings rebuilt over the ruins of an ancient Celtic town. In this village, you can see Nordic architectural elements infused with Celtic foundations, creating a unique look and identity. 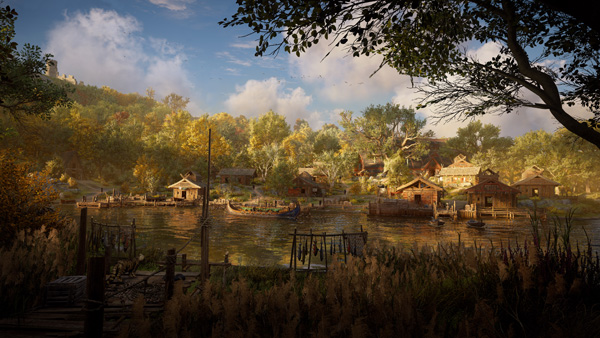 “We want the players to see something memorable in every location to help them feel more immersed in our story and compel them to visit locations over and over again,” Syarah said. “It’s exciting that they’ll be able to learn some history through the subtle hints left by art and design. To create the environments and characters and build scenes, we work in Anvil, which is Ubisoft’s proprietary game engine that has been the backbone of all the Assassins Creed games so far.”

A significant part of the team’s work on Assassin’s Creed: Valhalla are the water effects. Ubisoft’s Associate Game Director Antoine Henry described what the Singapore team achieved. “As Vikings, our players spend a significant amount of time sailing up the rivers of England with their crew. We wanted to make sure that these environments would be continuously interesting, from the beautiful look of the water to the ease of navigation – as well as create the opportunity to launch Viking raids. 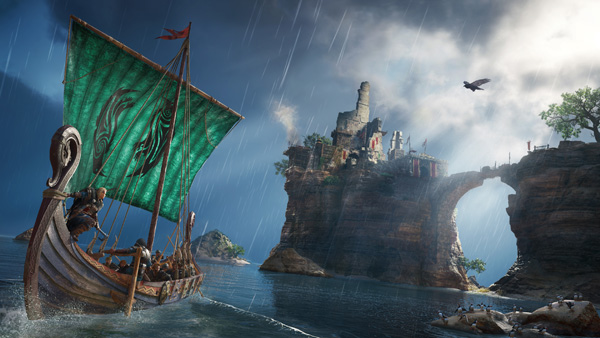 “The idea was to make the life in and around the Viking longships an absorbing, lifelike experience. The artists in Singapore were totally responsible for all aspects of the water – the visual rendering, the specific shapes and properties of waterways from brooks, to rivers, to the sea, but also the gameplay of navigating the longships and smaller punt boats, and the artificial intelligence for sailing traders and fishermen.”

Valhalla was designed to allow players to make decisions about Eivor’s story and customise the world and characters around him accordingly. Its role-playing game (RPG) mechanics allow them to determine Eivor’s character development and make choices influencing political alliances, combat strategy, dialogue and gear. As well as weapons that recreate the fighting style of Viking warriors, players fight diverse enemies, recruit new clan members and create and customise their own Viking raiders. 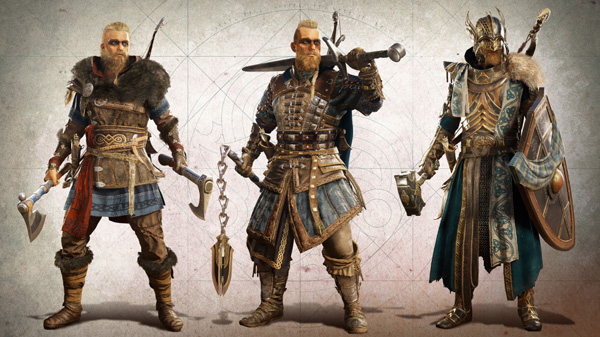 They sail from Norway to England in longships and engage in the Viking way of life through fishing, hunting and socialising, launching assaults against Saxon troops and fortresses, and pillaging enemy territories for resources. Building up new settlements involves constructing and upgrading buildings for use as barracks, blacksmiths and other purposes.

Giving players so many choices creates a tricky balancing act for the artists. The research, skill and creative ideas are all there. “As much as we want to show off the huge amount of lore and historical places we’ve encountered in our research, we are bound by time and manpower constraints, just like everyone else. We’ve put a lot of effort into the variety of content, and this effort was totally worth it.

“There’s nothing better than reading a player’s review about a special encounter that you helped create, or knowing that they understood the world and lore a little better because of a small detail. It makes my day when someone can get lost in the wonder of exploring the game world. It’s a challenge to create large, top quality locations while maintaining a healthy work life balance and great team spirit, especially when we’re forced to work from home. I’m proud of what we’ve accomplished.” 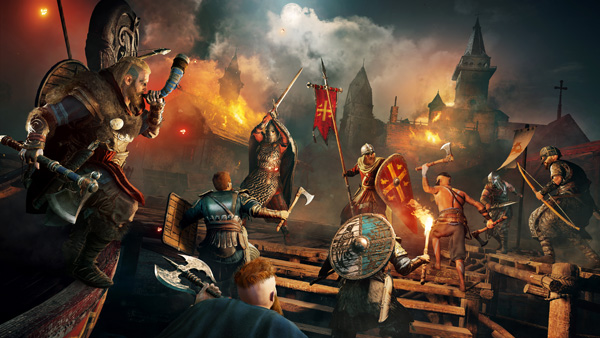 As Syarah sees it, one reason Assassin Creed games are so impressive is the different perspective each developer brings to the table. “Being part of a melting pot of culture and diversity is important to me. Working with people from various backgrounds really makes a difference and brings out ideas that we would never have come up with otherwise. For Assassin’s Creed: Valhalla, for istance, I had the chance to work with the team from Ubisoft Philippines as well as Singapore.

“When we had to start working from home, we frequently synched up and managed to maintain our robust communication because we believe it’s vital to keep our intentions and objectives crystal clear. It also helps that everyone on the team is open-minded and enthusiastic about making a great game together.”  www.ubisoft.com