EDIUS X Gets Up to Date with Background Renders, GPU Support and Video FX 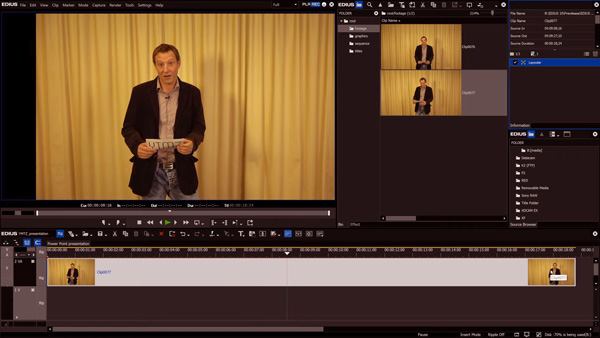 Hold the subject at the frame centre with motion tracking.

Grass Valley’s version 10 of its NLE, EDIUS X, is now released with a new modular software design that includes a background renderer and more GPU support. It also has four new audio filters, new looks for titling and a much bigger, more varied and stylish choice of video effects and transitions.

These updates add up to a turning point for EDIUS as an NLE for a bigger variety of projects. EDIUS has been recognised for a long time for its ability to edit a huge number of formats and frame rates – in real time, all on the same timeline. However the changes in EDIUS X make the package more convenient and creative, and in ways that will be interesting to new types of users. The updates affect both EDIUS Workgroup, which connects broadcast teams via the GV STRATUS video production and content management system, and EDIUS Pro for individual non-broadcast users.

One of the most important outcomes of changing to a more modular software design is that the render engine can now be independent of the user’s editing work. The new engine has greater GPU support and is compatible with new background rendering options. It has more functionality than straight file rendering, supplying the power for file conversions, batch and network rendering and others.

Because EDIUS can playback almost any media in real time, users have not usually had to render as they work. That is even more true now - EDIUS X Workgroup supports realtime 8K playback, and EDIUS X Pro has a Draft Preview mode, which was already available in Workgroup, that reduces image resolution or bit depth and speeds up playback performance for previewing. 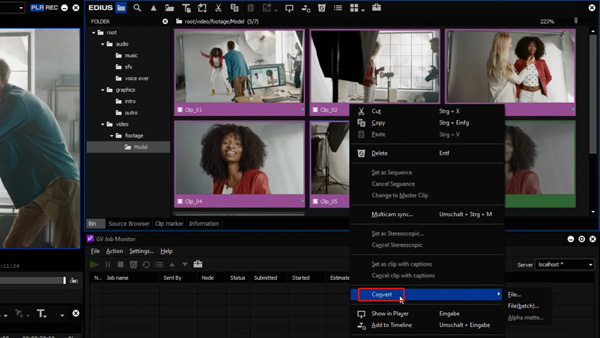 You can use the background render engine for batch conversions.

Earlier on whenever editors did need to render, for example, to export files, it meant stopping the edit to render. But now, a new render service operates in the background. The render engine itself isn’t visible but users can follow progress through the GV Job Monitor in the tools menu, and meanwhile continue editing. Notifications appear if a render needs attention.

Background renders are set up in a new section in the export dialogue called XRE (eXternal Render Engine). This facility has only been available before as an option in EDIUS Workgroup, and render jobs had to be set up on a dedicated PC server. Now it is integrated into both EDIUS versions, and works on the same PC as the NLE software.

For simultaneous and batch file exports, you can set priorities. It’s possible to set up custom batch exports of project areas you process often by saving the list and the settings together. This function can also be used to divide a long video into separate rendered clips by setting the in/out points and naming each clip.

You can also choose only to render certain sections of a complex timeline. For example, because parts of timelines that cannot playback in real time are identified, the user can select to just render those parts. If you change a clip on a batch list queued up to render, EDIUS skips that clip, highlights it on the timeline and proceeds with the others. Clips also remain rendered if they are moved on the timeline. 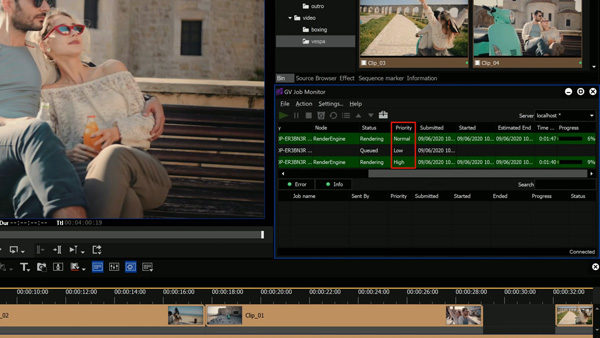 Setting up priorities for render jobs.

GPUs and Other Hardware Support

The background render engine can be used to convert files as well, which is useful at the start of projects when all files in a bin need to be converted into intermediate formats that are easier to work with. For example, a team might convert H.265 or RAW to the GV HQX codec, or change every file into the studio’s standard format. Grass Valley plans to develop other background render functions after the initial EDIUS X release, so that it can be used to change file format, codec, resolution, aspect ratio and so on, or even create files with alpha info.

EDIUS X, including the render engine, now has broader GPU support to include NVIDIA, which will help to encode H.265. Earlier, users could only export to H.265 using the Intel core processor’s QuickSync acceleration, but now it can be done with an NVIDIA graphics card. Grass Valley will add more types of GPU acceleration in the future. EDIUS now makes better use of higher-spec PCs generally. Note that minimum resource requirements include Windows 10, 64-bit and a CPU with AVX2 support, which means that machines older than 8 years are not compatible.

The Motion Tracker in EDIUS X has new functions for following and anchoring objects in a clip.

Earlier in EDIUS, the mask filter could be used for motion tracking while applying various filters to the tracked object or person at the same time, for example, to change the colour of an object or pixellate a face. Now in EDIUS X, you can also attach a graphic element to the object with the Layouter or the transform filter. The new Motion Tracker works in two different modes – chase mode and anchor mode.

In Chase mode, a clip and a graphic element, like a title, are placed on separate tracks and the Motion tracking is done on the EDIUS Layouter timeline, where the tracking point is chosen. EDIUS analyses the clip and performs the transform, leaving position and size of the title in control of the editor. A similar effect can be created with a PIP video or an animation element instead of a title. 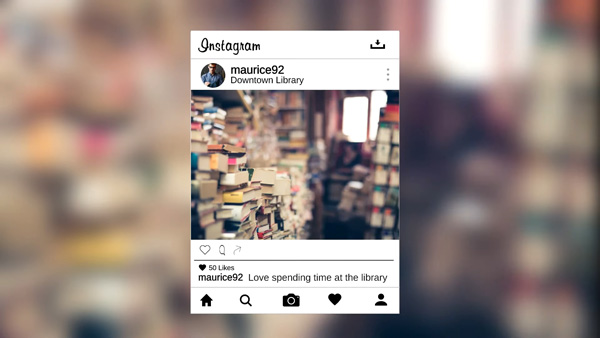 Anchor mode is used to automatically reposition an object in a shot, for example, to keep a person in one spot. This kind of tracking is also done in the Layouter timeline, which centres and holds the person at the centre. Borders are removed by scaling and repositioning the video, which also makes these functions useful to change aspect ratio for devices and social media, and for attracting attention to a detail in a video while still displaying the whole scene.

EDIUS has come bundled with New Blue Titler Pro software already for several years. For EDIUS X, New Blue have optimised and more closely integrated their software with EDIUS. The EDIUS X version of Titler Pro 7 has a wide collection of styles, presets and templates, social media graphics, lighting and motion blur FX, with better performance and stability than before. It suits complex animated titles, rolling titles and lower thirds.  An elastic timeline can be applied to extend title length while keeping the exit animation in place in the timeline.

EDIUS X also has a lot of new, subtle transitions and other effects such as wipes and perspective wipes with natural, organic looks, throws and stretching and panoramic effects. These work for many video applications and enhance title graphics, and result from working with video effects specialist proDAD to customise a package for EDIUS X called Vitascene V4 EDIUS Edition. It has more than 100 transition presets that can be customised with precise keyframing, plus 250 FX and filters.

A new set of complex audio filters, developed with Acon Digital, is now part of EDIUS X, adding to the existing ones that help with noise reduction, optimisation and mastering. EDIUS automatically compensates for the processing time each filter needs, keeping sound and vision in sync. 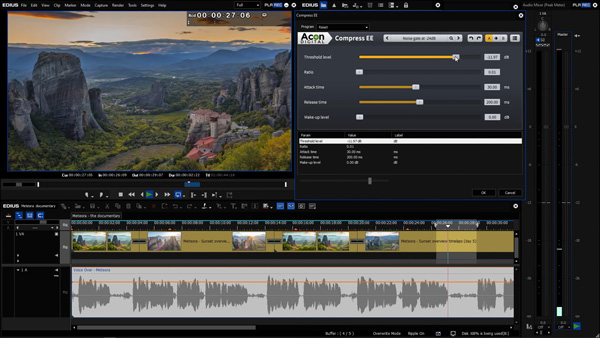 DeNoise EE removes background noise. Because the noise reduction works dynamically, users do not have to create a noise profile first. Presets for common situations like background machinery and mic problems are included.

Compress EE can be used as a noise gate to remove specific unwanted sounds in the background. Any element softer than the primary sound will be removed. It can also help make the softer and louder parts of a recording more similar – for example, compensating for a speaker moving further or closer to the mic.

Limit EE helps manage dynamic recordings combining loud and soft noises. You can place limits on such signals to prevent the audio track from clipping and sounding damaged. Deverberate EE removes or reduces reverberation in resonant environments. Like DeNoise EE, you can optimise the processing with a preset, for which EDIUS helps measure the reverb time as a starting point.

Grass Valley has said that they will keep same price for now for both the Pro and Workgroup versions of EDIUS X. No subscription is required – users buy the application once and receive free updates from that timer. Custom site and floating licenses are available for enterprise and education.   www.grassvalley.com