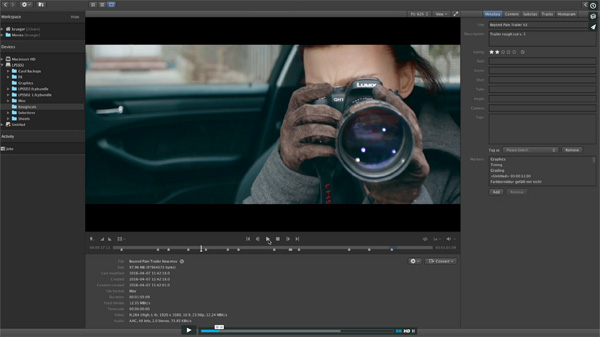 Kyno is media management, screening, logging, organisation and transcoding software for filmmakers, production professionals and other people working with video content and still imagery. It combines a number of common workflows in a simple interface that makes tasks faster and easier – on set, near set and in post.

One of Kyno most useful functions is the ability to screen and QC your video footage - in a range of standard formats - in a very versatile player without having to import or transcode first. Clips can be played directly from SD cards – or, in fact, from any storage. The player has accurate speed controls, so that you can see how high frame rate footage will look in the frame rate of a final edit. You could also apply widescreen bars to see if your footage will suit another format. All of these tasks can be done while you proceed with the shoot. The player is useful generally for navigating, checking exposure, and looping and zooming while you watch.

The software has footage markers and creates subclips that make it possible to organize your video in a completely customized way, fast enough so that you can keep the camera rolling. You can find, filter and browse footage on SD cards or removable drives in ways that make searching very fast.

For example, media aware filters in Kyno make it easier to find clips you need by filtering the view of your file structure using properties such as the codec or frame rate. Because the search criteria in Finder and Spotlight cannot see these attributes, this kind of searching normally requires a MAM system. If you know you are looking for a particular slow motion ProRes shot on your drive, for instance, you can drill down and filter the result by frame rate – say, everything higher than 60 fps - in the ProRes codec. This will produce a limited number of clips displayed with thumbnails that you can scan visually for the one you want. 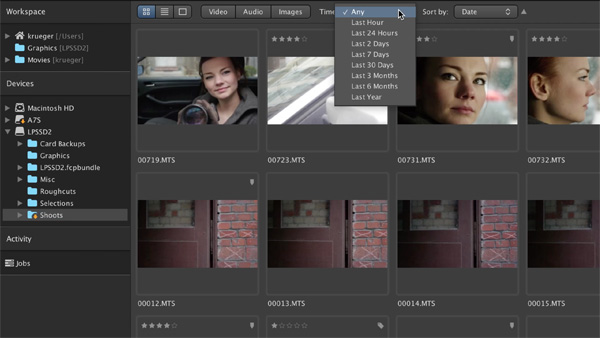 Footage can also be organised using media aware filtering as a batch function. Kyno is strong on batch processing within many of its functions. Batch transcoding or re-wrapping of footage can be carried out for editing in a chosen NLE, or to prepare the finished product for distribution, with de-noising added to your set of operations.

You may transcode or conform your footage to use any frame rate as well - convert or re-wrap are flexible operations in Kyno. Group several clips together, for example, then select and use one of Kyno’s presets to convert them as a batch. If you do this kind of work often, you can find your last or most used preset quite quickly and then specify the output folder or re-name the files in the same operation. 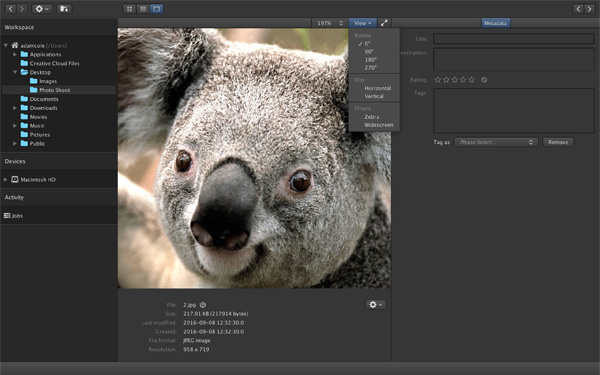 To precisely customize output file names, Kyno’s naming tools have a lot of options, allowing you to select very specific naming patterns to suit special projects, creating your own presets. Then you can use a batch set-up to do large-scale renaming, choose the destination folder and preview the results to keep track of what you are doing.

Markers are very useful tools in Kyno. They can be placed in a clip to help you navigate through the media, re-find important moments or choose still frames, and may be named, customized with text and exported in a list as an Excel document. Markers also help organise your material with a customized system of tags and ratings. Using markers, you can export numbers of still frames for blogs and social media from high-resolution footage. This can be done in a single step for several clips. 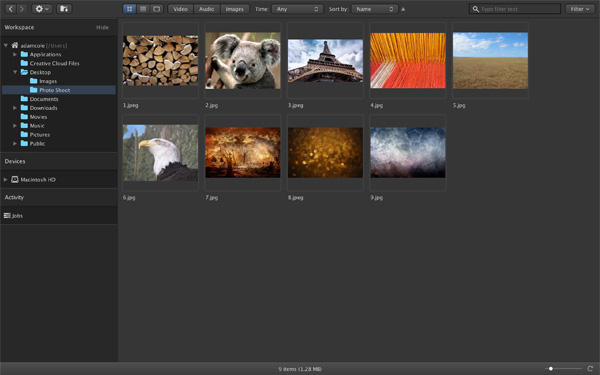 Sub clips use markers for in/out points – they can then be saved out, adding a name and description for later reference. If you group them together as a rough cut to either play or export as files, sub clips become a neat way to send colleagues feedback. Further markers can be incorporated, outputting an Excel report for the accompanying notes. Quickly creating and exporting sub-clips to access the parts you really need for editing or DVD menus can be an efficient way to prevent importing too much unusable material into your NLE. Often you can export without transcoding, depending on the file format.

One aspect to look out for in Kyno is dissociating the hidden metadata files from your video or images. Currently, you don’t have to worry when you move or copy entire folders. But you will disassociate metadata from the original file when you move the individual files around outside of Kyno. The development team advises, “We are working on a recovery mechanism, similar to the reconnect functionality used in NLEs, but our ‘no ingest’ concept means this situation can’t be completely avoided. 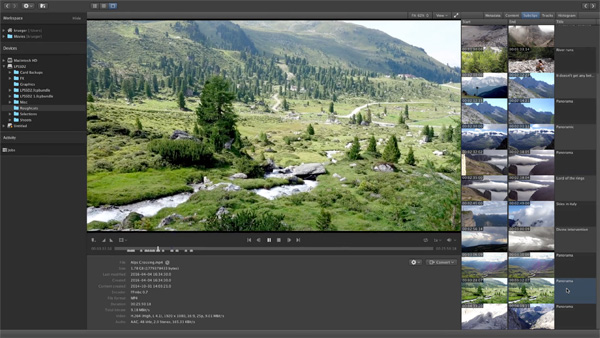 "As not all metadata can be stored within files for many of the formats Kyno supports, that isn't an option either. It's a trade-off that we feel is worth the extra speed that Kyno affords through not having to ingest data into a closed, black box. However, we’ll continue working on ways to deal with those situations and make them less likely. Remember that when you create low-res versions of high-res videos in Kyno all descriptive metadata including tags and markers will remain intact. That's something other transcoders do not offer.”

Currently, Kyno software is available for Mac computers, and a Windows version is in development, planned for release later in 2016.  lesspain.software/kyno