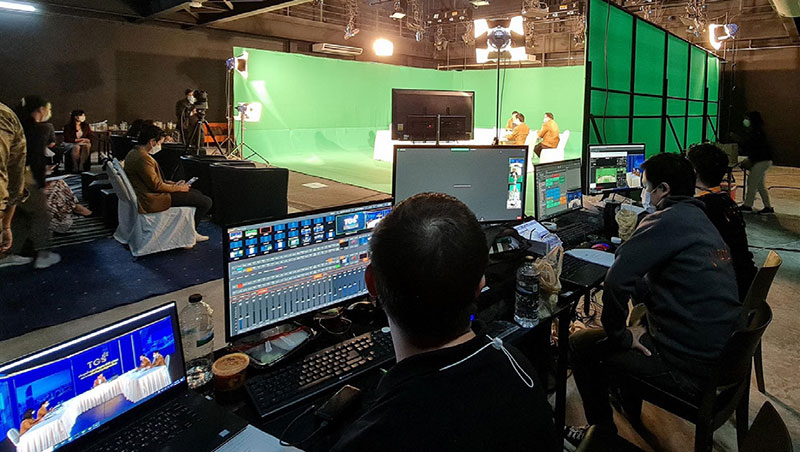 Education organisations have been especially proactive in adopting tools developed for broadcast to run the events they rely on to maintain engagement with staff, students and other attendees. Costs have been driven down to the point that high quality set ups are in reach of many organisations that would not have thought of using them before.

The Association of the Thai Government Scholarship Students (TGS) funds promising young Thai students for study abroad, often in the UK and the USA. TGS has over 70,000 alumni and holds an annual summit to reunite this group, many of whom now work in the government sector in Thailand, with a series of talks and seminars highlighting the organisation and its members’ achievements in the previous year.

Realising that its summit was under threat due to Covid-19 restrictions, their team worked with Vizrt to develop a production workflow.

Meeting in a Virtual Set

To run this key event virtually, TGS aimed to meet five key criteria – a high quality virtual set, and minimal setup that could display broadcast quality, quick deployment, live international links and the ability to broadcast on both Zoom meeting and Facebook Live.

With only one day available for setup and rehearsal, the solution had to work almost perfectly. The virtual studio was first designed by Vizrt Thailand using Viz Artist 4, before ensuring the President of the TGS could interview four students live.

“With the NewTek Live Call Connect feature that comes with our Live Production Control Suite, we can bring in callers from applications like Microsoft Teams, Zoom, Skype and so on,” said Pahuton Sriwichai, Solution Architect, Vizrt. When a user launches the Live Call Connect app and begins the meeting, each caller is automatically converted into a video stream combined with system audio to feed into Vizrt’s Viz Vectar Plus, a cloud-based live production system, as an input. Live Call Connect will automatically detect and separate the individual caller screens as discrete inputs.

“In this event, we used Zoom Meeting allowing the four scholarship students to join the Zoom call. Viz Vectar Plus, serving as a software switcher, has an integrated function that allowed us to bring these four scholarship students, each shot against green screen, in as different sources without needing further devices. We then routed these feeds back to the Vizrt XR Set using Viz Vectar Plus, so they could be used as camera sources with green screen and combined into the same Virtual Studio set.”

An NDI-enabled Panasonic PTZ Camera was set up at the centre-front of the green screen in the main studio space for capturing the TGS President, who was also hosting the interviews. The PTZ camera sent the camera signal to Viz Engine for rendering and compositing, and simultaneously sent the tracking data to the tracking hub application. Tracking hub, designed for virtual studio applications, collects and stores data from camera and object tracking systems and feeds it to Viz Engine. 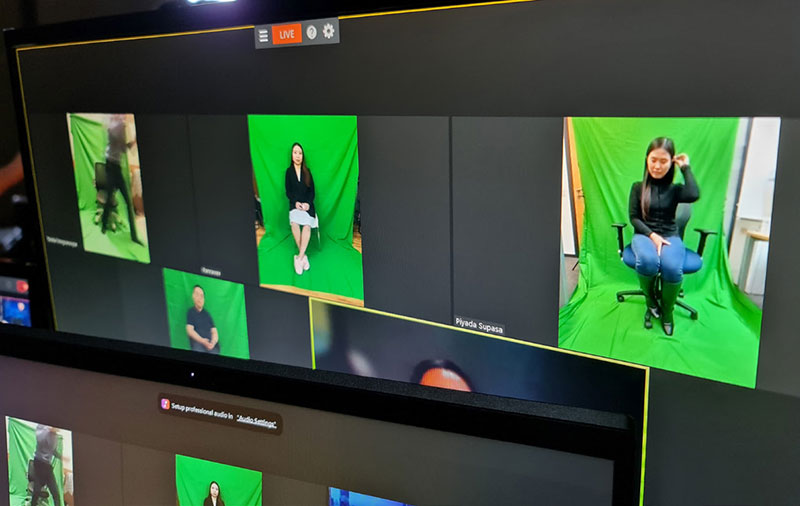 As the four scholarship students were, in effect, inputs into the Viz Engine, the pan/tilt/zoom functionality of the camera was reflected in all of these input sources. The result was a success. The students were all shot in chairs against green screen and then composited into the virtual set, so it seemed that they were all sitting in the same studio and being interviewed in real-time by the President.

“It worked well enough that the audience might not even have noticed that the speakers were all sitting in different parts of the world,” said Assistant Professor and TGS committee member Dr. Antika Sawadsri.

Viz Arc was used to set up the virtual sets, and has a user interface for controlling live VR/AR graphics and fine tuning the Fusion Keyer, which enabled the operator to do some fast fine tuning in just a few minutes while the team was changing the set.

Viz Vectar Plus’ built-in software-based audio mixer, meanwhile, looked after the audio workflow. Any participant who joined the Zoom call externally automatically received a dedicated audio mix-minus signal, but the team had two wireless mics on hand in the live studio as well.

“As a software-based audio mixer, apart from a professional UI that allows us to create mix minus for the live host, the system also supports NDI, Dante and AES67, which makes our setup much simpler,” said Pahuton Sriwichai.

Two resolution-independent streaming encoders, part of the Live Production Control Suite, meant they could handle multiple recordings simultaneously, as well as select any sources or any mix output to be the streaming source.

“Vizrt’s graphics played a role as well,” said Sriwichai. “The Viz Trio system supports advanced 3D real-time graphics for various types of CG content and allows the operator to update the content up until the last minute before the CG elements go on-air.”

The event was successful, delivering the largest audience for the seminar yet, and has led TGS to rethink the way it will run future summits, even when the pandemic is fully over. “One thousand people watched our seminar online so I think that in the near future we will be able to do it as a hybrid version,” said Dr. Sawadsri. “Even if we have the onsite version, perhaps we can also do a broadcast in real-time online as we did this year.”   www.vizrt.com