WELT Works with Vizrt on Automated, Software-Defined News and Graphics 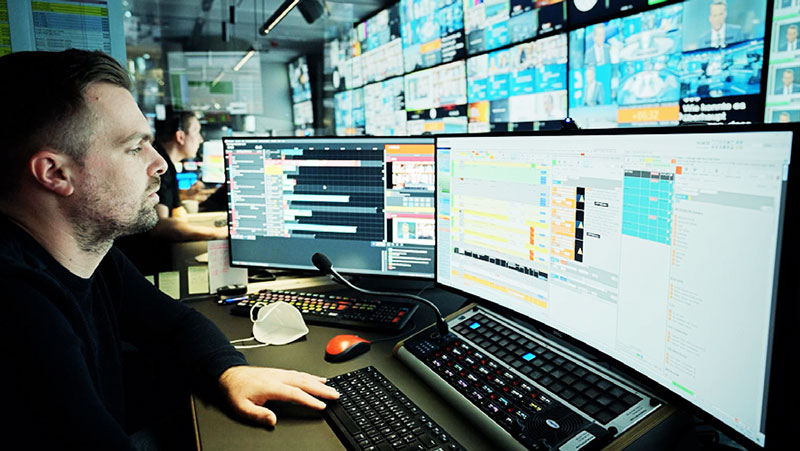 Germany’s WELT operates as a free-to-air 24/7 television news channel, and makes regular news updates available to ProSiebenSat.1 Media properties including ProSieben and kabel eins. When WELT had to move to new premises in mid-2021, it took the opportunity to build a modern system that would reinvent its infrastructure and bring their studio presentation graphics up to date.

The organisation wanted support for the challenges of running a 24/7 broadcast news channel, such as keeping all components synchronised, and responding to changes in the news programming cycle. It also needs options to bring in media from diverse sources, and react swiftly to breaking stories while keeping the audience interested and engaged.

Above all, it has to remain in constant operation. Allowing one vital part to crash and bring a whole show to a halt, was not an option. Aware of these challenges from the beginning, they chose systems designed and delivered by Vizrt’s engineering and R&D teams to support major portions of the infrastructure.

"We wanted to make it possible for the day-to-day production to take all the media elements and put them together in a compatible format, thereby giving the journalists the ability to put their ideas directly on screen," said Phillip Kern, Senior Director, WELT. "In short, we wanted more flexibility while relying on fewer components." 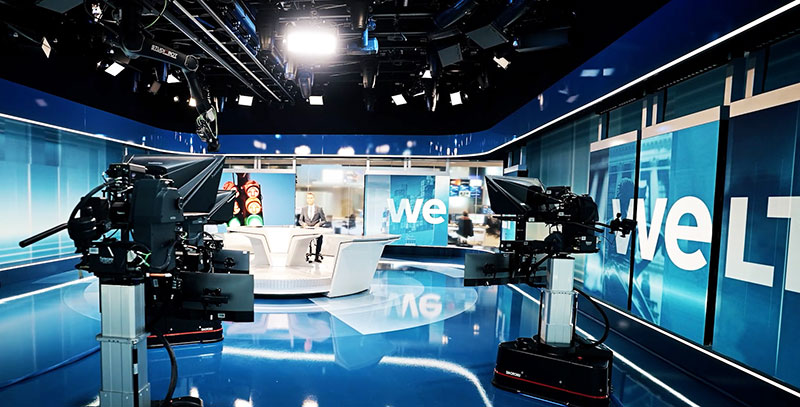 WELT had several creative goals in mind. Philipp said, “Our ideas included a hybrid augmented reality (AR) studio and AR graphics, a cycloramic (curved) LED backdrop, and a physical studio with different layers such as moving LED screens allowing teams to place content in different positions and configurations around the studio.” To set up a unified workflow that would simplify and control the many inputs and outputs for productions with little manual intervention, WELT would need redundant systems to secure their operations. Meanwhile they wanted to avoid crowding the rack space with extra hardware.

The moving LED panels, which could be arranged to form diverse backdrops, would need to be populated with content as well as manoeuvred to work in different production requirements. WELT also wanted to be able to switch over to a completely virtual studio in a matter of seconds, or transition to live sources as direct contributors to an on-going broadcast, while redesigning the screen on the fly.

Consequently, WELT was keenly interested in automation. A system with so many ‘moving parts’ would demand precise control and a lot of material to be generated, not just the normal news show media such as video feeds and graphic overlays. “We were constantly manipulating visual data, transferring motion graphics created in Cinema 4D, for example, into Vizrt or another graphic system and then moving that into Vizrt Mosart which then fed the video switcher. This meant transforming the original creative assets two or three times,” said Philipp.

To keep their workflows straightforward and avoid routing multiple fixed hardware components through copper SDI to a hardware mixer in the gallery, they saw potential in a software SMPTE 2110 NMOS-based networked approach to build on the automation already in place.

“We input the graphics directly into software and controlled all the broadcast media in one real-time environment,” he said. “The broadcast engineers at WELT were already familiar with Vizrt’s media management, automation and graphics software, and Vizrt has actually customised applications for WELT over the past 20 years. Using Viz Mosart, we completely automated the daily production, and each pre-planned news show required only two or three people in the gallery.” 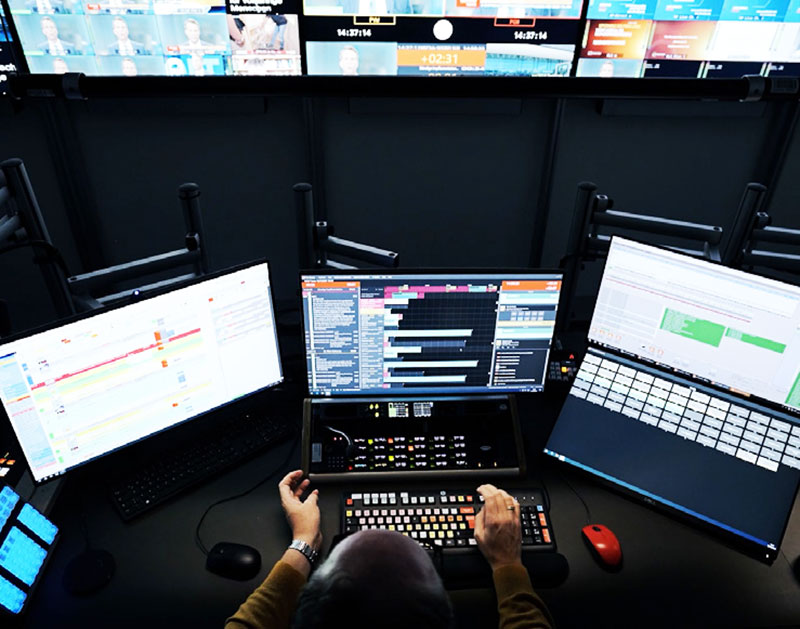 Simplification started with creating unified feeds for the LED panels and monitors inside the studios, to drive the virtual set, define the look and feel of the programmes and to supply storytelling graphics. Using as few components as possible, they wouldn’t need to orchestrate a huge number of tools to result in a distinctive look and feel.

“A core element of the new centralised workflow was replacing the studio mixer hardware with a software-based mixer,” said Adrian Fiedrich, R&D Project Manager at Vizrt. “We could modify and extend components to meet the new ST 2110 workflow, and add new features to fit the customer’s needs. Interestingly, certain software components had to be introduced because those devices hadn’t existed before. Other products needed updating, but all the various components, routing, everything is controlled by Vizrt applications.”

In a traditional live studio environment, a vision mixer panel allows the operator to bring in and cue up media from video servers, graphics servers, clip servers and live camera sources, all routed via copper cables.

“Vizrt's Viz Engine and other software such as Pilot Edge for journalists and Viz One for asset management, can do the work of standard default studio workflows, combining them within one or two software components instead of five or more pieces of hardware,” said Adrian. “The engine handles tasks internally, so we refer to it as a ‘Mixerless’ or ‘Dynamic Input Handling’ workflow.”

Philipp said, "We’re pleased that some users find no difference between a real video switcher and the Vizrt software. The journalists have more direct responsibility for the show, and it gives the day-to-day production more options when putting the show elements together. We are now working with colleagues to integrate the virtual environment in Studio 2 with a real environment."

All elements run on event-based logic, driven by Viz Engine, which is a combined compositor and render engine. “Each gallery has at least four Viz Engines devoted solely to independently switching network streams, at any time they are needed,” said Adrian. “A new plug-in architecture was developed for the engine which takes care of requesting the source from the network. The plug-ins talk to the system orchestrator, which talks to the routers and gets proper feedback as soon as the sources are switched.

“This architecture allows WELT to maintain as many as 100 sources across the whole building ready for broadcast within a few seconds. Operators drag them into a template-based rundown on the UI. The plugins then create the appropriate commands and prepare the source for routing. The operators are notified as soon as the source is ready, to avoid conflicting content issues.” 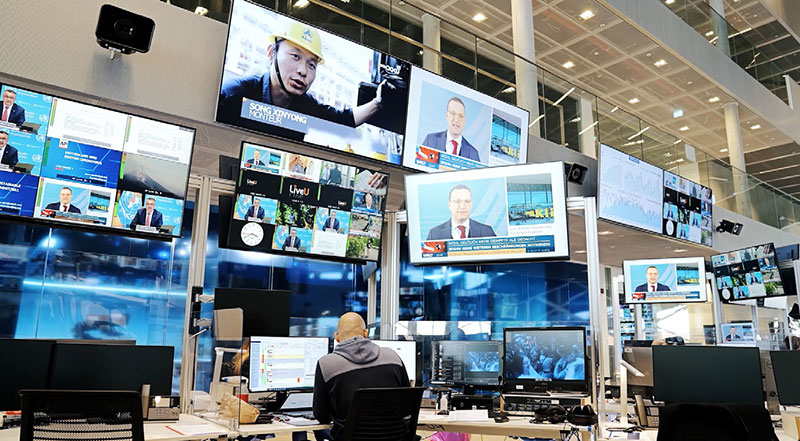 The system doesn’t rely on hardware with a fixed number of inputs or outputs. Instead, it can have many ‘instances’ running on the same machine to generate different kinds of output, such as a different aspect ratio. It can thus be scaled up not only in size but also in functionality.

One Viz engine can support WELT’s seven cameras because of the way the mixer-less workflow can switch them. “Camera control is something Vizrt has worked on for years,” Adrian said. “This system, for instance, asks the crew to select the cameras they want to use, and handles the camera positions through the robotic interface.”

Due to the software-based environment, previously discrete devices can communicate with each other more effectively. The vision mixer can talk to the camera tracking system as well as drive functions like tallies. The set-up is similar for the IP-controlled lights – the system only needs to know which lights to use and the brightness levels and, from there, everything is automated.

The massive cyclorama video wall is also driven by the Viz Engine, and can be either controlled directly via Viz Multiplay or automated by Viz Mosart. “You can use a fully automated programme rundown, or have an operator hitting ‘next’. But hardware vision mixers, panels or copper-based routing aren’t necessary because the switching at the backend is now completely dynamic and ready to adapt to the application,” said Adrian.

“As soon as you accept the rundown, all you need to do is press play,” he said. “You no longer need the person who controls the audio mixer because this is done by Mosart. It handles all the content, such as combining graphics and clips and compositing different layers of graphics on top.” 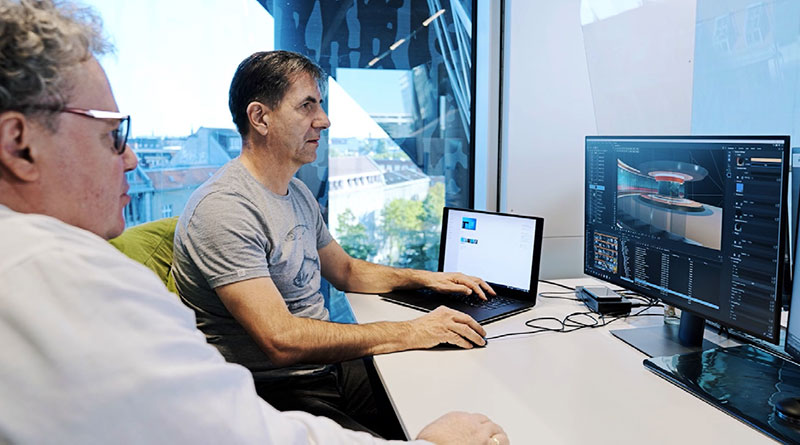 Sustainability concerns are also addressed. “In the WELT server room where the hardware now sits, there are just standard HP machines pulling a few hundred watts, rather than the power required for hardware video and audio servers, clip servers and full-sized mixer panels,” Adrian said. “They only need a rack, instead of a whole room.”

The WELT system’s development period lasted a year and a half, much of which took place during lockdown and social distancing restrictions in Germany. However, work accelerated again from October 2020 to April 2021 while Vizrt and WELT teams worked with the systems integrator Qvest Media.

“WELT was the first to think about these particular dynamic workflows at this scale,” said Adrian. “So we had to be the first to find the solutions. They had already invested their trust in us to achieve their goals, and it was actually good to have such a strong partner because what we are doing at WELT hasn’t been done anywhere before.”

Although the system essentially reflects what WELT originally requested and was tailored to them, the Vizrt components themselves have been developed to adapt to many user types. “We see the project as a prototype for this way of working,” said Adrian. “Already, other customers in Germany are starting to create test setups on a smaller scale, and we are considering how the system can work for them.”   www.vizrt.com