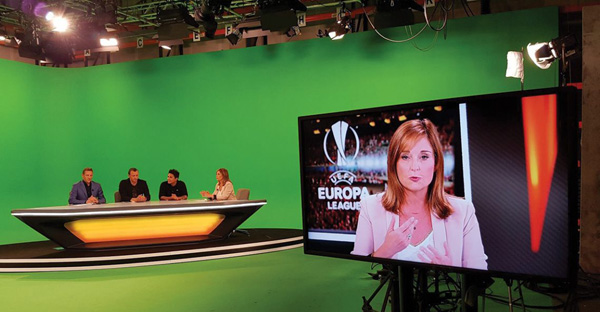 Zero Density has developed a new hardware system for virtual sets and broadcast graphics called RE AMPERE that accelerates the rendering of real-time graphics. Now that live events are capable of attracting large numbers of viewers, broadcast teams need to balance their use of exciting, complex imagery with high quality execution. With faster performance, producers and broadcasters can use photoreal UHD visual elements more easily.

The choice of hardware needed to make real-time graphics practical may not be straightforward and therefore, Zero Density has built the necessary components into a plug-and-play device that includes an NVIDIA RTX A6000 GPU and AMD Ryzen Threadripper Pro CPU.

RE AMPERE is configured to produce the best visual results from a series of real-time processing operations starting with high density video I/O, and then keying, compositing and rendering. A single unit has enough processing power to support photoreal Ultra HD graphics streaming from multi-camera setups, in real-time at 60fps, while preventing dropped frames. Zero Density has designed and tested the new device for reliability and stability.

RE AMPERE supports Deep Learning Super Sampling (DLSS), an image upscaling technique NVIDIA developed for its graphics cards, originally to use for video games. It uses deep learning and dedicated AI-processing Tensor Cores to upscale low resolution images to a higher resolution. It trains a neural network using ‘ideal’ images at high resolution, and low resolution images of the same material, and stores the trained network on the video card driver.

This network compares the actual low resolution images with the ideal reference and produces a full high resolution result. Motion vectors tell the network the direction in which objects in the scene are moving from frame to frame, to help it estimate what the next frame will look like. Versions 4.26 and up of Zero Density’s Reality software is equipped to take advantaqge of DLSS.

Due to 2nd generation NVIDIA ray-tracing (RT) cores, RE APERE’s real-time ray tracing is able to output photoreal scenes with better reflections and refractions in real-time graphics. GPU-driven processing and a PCIe Gen4 bus makes it possible to deliver multi-camera renders, composites and SDI video from a single unit.

RE AMPERE works out of the box at a basic level, and productions can also work with Zero Density’s support team to augment the workflow and achieve more complex set designs.   www.zerodensity.tv