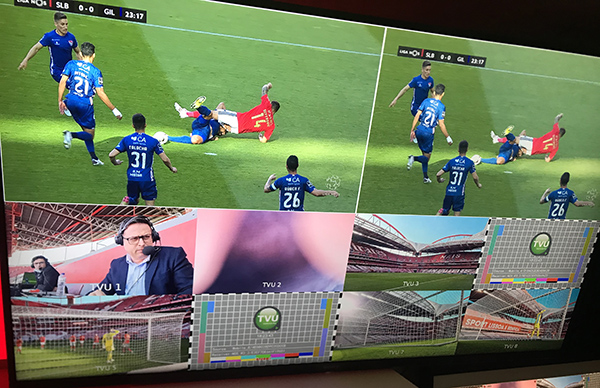 As part of a 5G demo for NOS, several TVU One mobile transmitters, the TVU Anywhere mobile app and TVU transceivers were used to deliver live 5G video from the pitch. During a Liga NOS match, a roaming reporter covered the victory celebration and transported the holographic version of the winning team captain for a post-game interview.

Felipe Montesinos Gomes, Head of Sponsorship & Activation at NOS said, “With 5G, our network capacity can handle a far greater volume of data within the stadium, allowing us to improve the experience for fans in the stands and to those watching from home. Those at the venue can choose the angle from which to watch the game or activate one of the broadcast cameras, among other immersive activities. TVU Networks has supplied the level of transmission reliability over IP and technical support required for such a large-scale operation.” 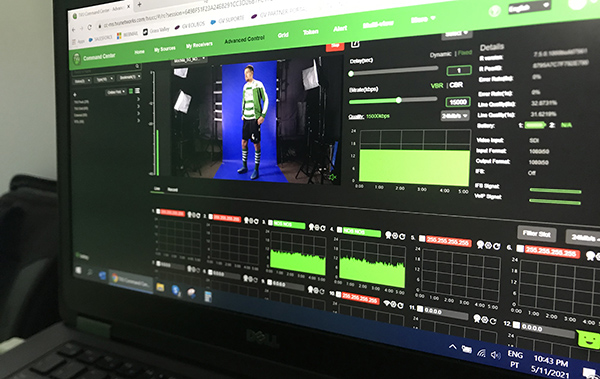 As well as its usual 18-camera coverage, Benfica TV (BTV) added seven 5G feeds to its broadcast on 6 May from Estádio da Luz (SL Benfica vs FC Porto). The 5G cameras were placed in areas not accessible with manned, wired cameras, such as near the goal netting, on a walkway at the top of the stadium, in the tunnel from the locker rooms to the field and beside player benches.

Four TVU One 5G mobile transmitters and three 5G mobile phones with the TVU Anywhere app were used to deliver low latency video, in high-quality, from the field to four dual-channel TVU transceivers at an OB van on site. From there the signals were streamed and broadcast to viewers around the world.

During the game in which Sporting Clube de Portugal football team won the title of champion of Liga NOS, on 11 May at Estádio José Alvalade, Portuguese broadcaster TVI employed a memorable application of NOS 5G with a post-game roaming reporter and holographic player interview. Social media influencer Guilherme Geirinhas covered Sporting CP’s celebrations after winning the league title using the TVU Anywhere app on his phone and a TVU One mobile transmitter. 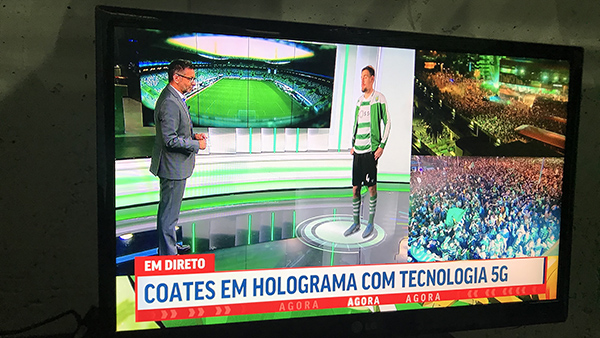 The TVU Anywhere app uses a smart device to transmit full-HD live video using cellular bonding and HEVC encoding. Users can monitor and control transmissions and take them live from one central UI, adjusting resolution and frame-rate, and receive information about real-time transmission rates and live streaming time. A studio operator can also control all camera functions from a remote location.

Signals from the reporter’s phone were sent to a TVU transceiver at an OB van on site for broadcast and streaming. The holographic image of Sporting CP captain Sebastian Coates was sent via a TVU One 5G device to a TVU transceiver at the TVI studio after his team’s win. From the studio, a TVI host conducted a live interview with the hologram version of Coates.  www.tvunetworks.com