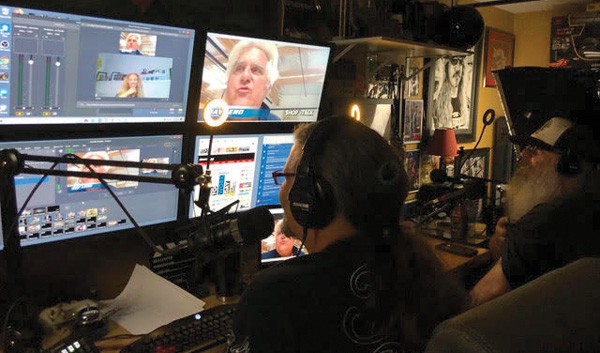 The Covid pandemic brought Cycle Source motorcycle magazine to an abrupt turning point in March 2020. Its editor-in-chief Chris Callen, who had published Cycle Source as one of the last surviving custom motorcycle magazines for 25 years, first had to shift from monthly to bi-monthly publication in response to the sudden drop in sales, and then wondered if he would have to close the business altogether.

However, he noticed that some of the live streams of various motorcycle rallies that he produced from time to time alongside the print magazine, were now attracting millions of views. Kept off the roads due to lockdown, motorcycle enthusiasts were using social media channels to connect with each other, as they would normally do on their bikes.

Chris and his wife Heather Callen, working from Pittsburgh, PA decided to switch their focus and make streaming media production the centre of their business. They renamed the company Source Media Group to reflect their broader, multi-media approach, which now spans live and recorded audio podcasting and blogging, commercials and documentaries, and the Cycle Source print magazine that has about 350,000 monthly subscribers. Streaming reaches an affiliate network made up of 12 to 14 social media channels, with close to 3.5 million viewers. 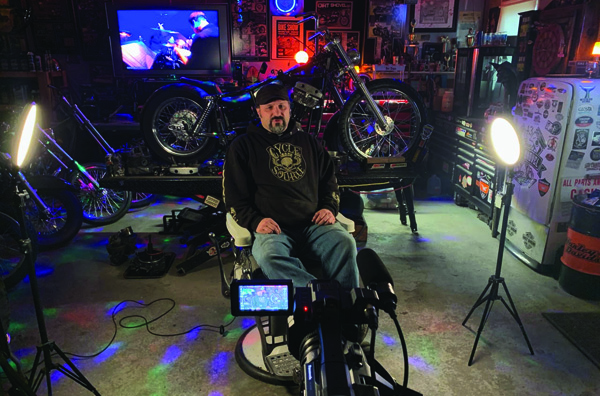 By re-purposing its content across these outlets, Source Media still tells motorbike stories, directed to the same targeted audience that motorcycle advertisers are keen to reach. The main change is the media channels the content appears in. For production itself, the Callens expanded their use of Telestream Wirecast and Restream.io software for live video production and streaming.

The creative, logistical and technical challenges Chris encountered as he re-invented his business all came from the need to generate 40 to 50 hours of original content every month, while maintaining the high 1080/30p video production standards that attract the audience his advertisers and sponsors pay to reach.

The programming is varied. Some shows run 90 minutes to two hours long, with several regular live shows including live remote productions of motorcycle rallies and bike shows. On the other hand, programming such as documentaries, garage segments, a cyber swap and similar shows are pre-recorded but in a style that looks live. Chris also has marketing partners that carry his programming on their channels in exchange for promotional consideration via Source Media.

He compares this type of distribution strategy to a TV network working with affiliate stations that carry its programming. Together, the partners deliver the feeds across 12 to 14 different websites and social media channels, giving him a potential reach of millions of viewers per week. 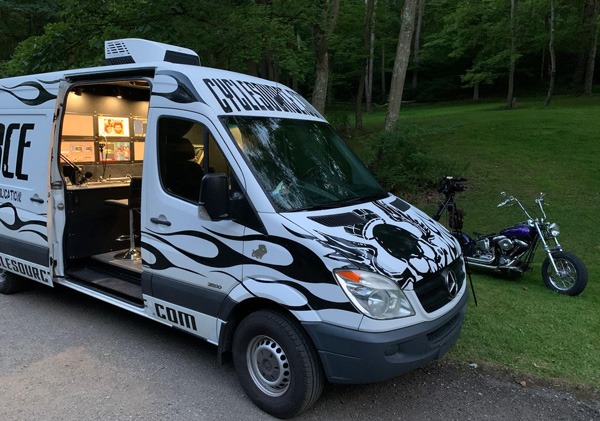 With the help of guest co-hosts and Heather, who is his production manager and grip, Chris produces the shows largely as a single operator. While hosting the shows, he takes on all of the key production roles including line producer, technical director, graphics operator and audio engineer. He made this possible with a Telestream Wirecast workflow that he customised to work both in his home-based garage studio and in the Mercedes van that serves as a mobile unit. He also commented that the Wirecast UI is logical, straightforward and easy to work on.

The ability to restream is a key reason that Wirecast has worked so well for Source Media. Restream.io is a platform of tools that sends a single stream to over 30 social media streaming destinations. It takes the program output from Wirecast and distributes it in real-time to platforms such as Facebook, Twitter and YouTube sites, simultaneously. From there, it aggregates all the user comments from all of those destinations, and deposits them into an on-screen chat box Chris places in the program stream.

Chris had first used Wirecast five years earlier when he first began experimenting with streaming, and recognised its broadcast-quality video, audio and graphics capabilities. He especially liked one of Wirecast’s features called Rendezvous, which brings live video of remote guests into the Wirecast environment. He can also bring in video of guests via platforms like Zoom and Skype over an NDI network into the live show. 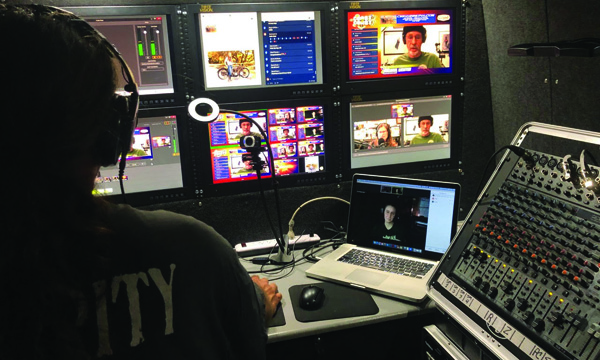 Chris had to learn live, broadcast-quality video production and streaming skills on his own from the ground up. Having the Wirecast was an advantage because of its ease of use, but he still found it necessary to thoroughly research all aspects of live streaming production, from codecs and audio to bandwidth requirements.

Chris also needed to organise a way to quickly move equipment from its on-premises space in his home garage studio into his van. Although he initially used a fly pack, the need for set-up at every location was time-consuming and opened them to further problems, such as missing cables and systems integration issues.

This experience led him to develop a rolling rack system that can be bolted to the floor inside the van. Since the equipment is pre-mounted in the rack, there’s no need to plug, unplug or remove any gear for set-up or strike at the remote shooting location. Once at the site, he can usually be ready to start streaming in 20 minutes.

A key production concern, however, is that remote sites must have a dedicated Cat-5 or better Ethernet hook-up that he can use. Wireless connections are not robust or reliable enough for streaming. The only wireless transmission systems in use are the Hollyland HD wireless transmitters that send roving camera video and audio signals back to the Wirecast switcher in the van. His future plans include acquiring a bonded-cellular transmission system and converting the Sprinter into a satellite uplink van. 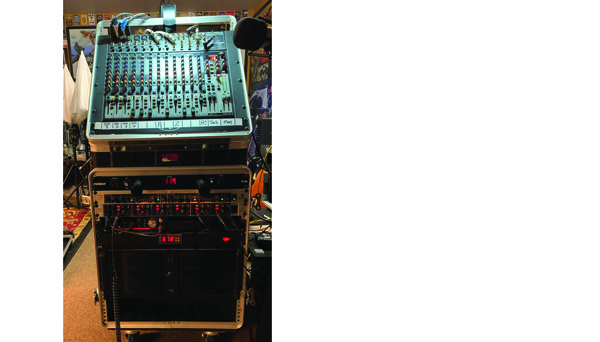 Source Media shows can be quite complex, featuring panels of co-hosts and guests, bike collectors and custom builders, band performances and stunts, as well as interviews with celebrities like comedian Jay Leno, a known motorcycle enthusiast. Chris has covered major motorcycle rallies, such as annual events in Sturgis and Daytona, as well as putting together his own staged or virtual rallies during the Covid lockdown, some of which have been day-long events with dozens of featured guests and performances.

To manage the diverse live production demands, he uses all five video layers in Wirecast to pre-build the look of the show with broadcast design graphics and backgrounds, plus elements that may include logo rolls and a sponsor banner at the top, with lower third supers and other on-screen text. He regularly uses a chat box to the left of the screen, and two centre-screen windows to fill with video, as well.

During live shows, his pre-build strategy means he can roll in all of these elements as a single-layered composite, giving him a chance to focus on other real-time tasks such as switching and keying video into the windows, rolling in clips, showing photos and making sure the audio levels and quality are right.

In the field, he often switches over to look-live recording. This approach allows him to do post-production editing, such as inserting commercials, photos and B-roll, to create a more finished product. He then broadcasts the pre-recorded shows out of Wirecast with a 5-minute pre-show countdown window to add to the look-live effect. The Wirecast output goes directly to Restream.io, which distributes it to the multiple destinations while sending back the viewer comments. Chris then interacts with those viewers to build up enthusiasm and engagement. 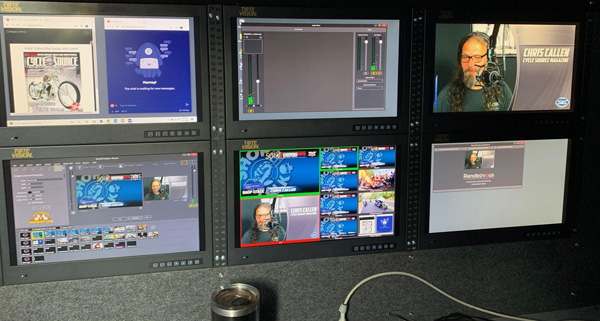 Chris takes the content as far as possible on all Cycle Source channels. For example, when he shoots a feature about a well-known person, company or event, he often re-purposes the content into various short and long format videos and ads to use across the social media network. Advertisers help sustain the business, buying impressions at very low CPMs.

Audio presents major challenges, in the studio or at locations. Chris’ audio set-up is elaborate, mainly the result of much trial and error. He said, “People will be much more forgiving of video issues than of poor audio, and as the problems persist, you can just watch your audience run away like sand through an hourglass.”

Experimentation has shown him that running all of his audio sources through an analogue audio mixing board is far more stable and dependable than a digital audio mixer in terms of controlling the flow into the computer. He noted that with an analogue mixer, which he uses to set, adjust and control audio levels during shows, settings are either on or off. Windows 10, however, can cause audio settings to change when the mixer is unplugged and plugged in again.  www.telestream.net