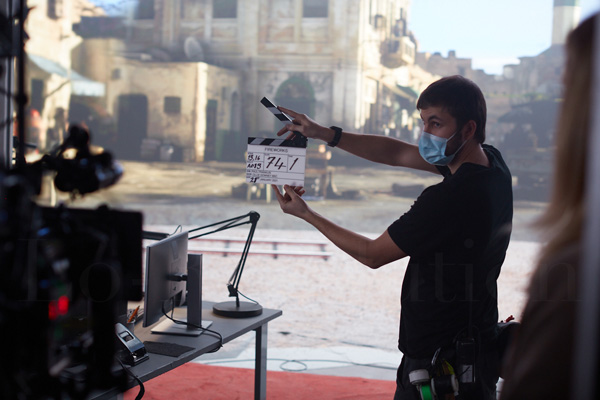 Dimension and DNEG are working together on a number of high-profile virtual production projects, including a new short film called 'Fireworks' directed by DNEG’s Creative Director Paul Franklin, produced by Annalise Davis for Wilder Films, and written by screenwriter and playwright Steven Lally. The film is also supported by Epic Games, Lipsync Post Production and StoryFutures Academy.

Virtual production uses real-time systems to remove the barrier between live action capture and visual effects. This partnership will bring together Dimension’s real-time development and LED stage expertise with DNEG’s in-house virtual production resources and real-time workflows to enhance the service that DNEG offers to its filmmaking partners, and broaden Dimension's relationships across film, episodic and animation projects.

Both companies have recently strengthened their virtual production capabilities in North America, with Dimension bringing on board Jim Geduldick as SVP, Virtual Production Supervisor and Head of Dimension in North America, and DNEG hiring James Sweeney as Virtual Art Department (VAD) Supervisor – both based on the US West Coast.

DNEG CEO Namit Malhotra said, “Our industry is evolving quickly, accelerated by the changes brought about by the global pandemic. This new creative process enables fresh approaches to the production of filmed content, opening more creative avenues for our filmmaking partners and addressing a number of the limitations imposed by the current restrictions on on-set and travelling.”

Steve Jelley, Joint Managing Director, Dimension said, “Game technologies like Unreal Engine are elevating the creative process for filmmakers and storytellers and we’re seeing a surge in demand for our virtual production and volumetric services - right across the entertainment sphere. These state-of-the-art production techniques point toward an new era for content creation and our partnership with DNEG brings these services to an even wider set of clients across film, episodic and animated content.”

Dimension provides productions with custom-built LED stages and is finalising plans for permanent virtual production stages in the UK and North America. The studio also recently unveiled its Polymotion Stage, a mobile multi-solution studio capable of capturing high-quality volumetric video, image and avatar creation at up to 4K with integrated motion capture.

The Dimension team were early pioneers of real-time production for filmmaking and virtual reality, having launched the first ever VR experience to be officially certified by the British Board of Film Classification in ABE, and created XR experiences such as Madonna’s holograms at The Billboard Music Awards, ‘Britannia VR’, ‘Sky Scope’ for Sky Sports at The Open, ‘Virtual Vikings’ with Ridley Scott Creative Group and the Balenciaga Fall 2021 Collection video game.

DNEG has built on its experience of using on-set digital front projection and LED video wall displays on Oscar and BAFTA-winning films such as ‘Interstellar’ and ‘First Man’ to develop a strong filmmaker-focused virtual production offering which has already been deployed on films such as Denis Villeneuve’s ‘Dune’, ‘Death on the Nile’ for director Kenneth Branagh and ‘Venom: Let There Be Carnage’ for director Andy Serkis.

DNEG is currently delivering visual effects for feature films such as ‘The Matrix 4’, ‘Dune’, ‘Zack Snyder’s Justice League’, ‘Uncharted’ and ‘F9: The Fast Saga’ and episodic shows such as ‘Jupiter’s Legacy’, ‘Shadow and Bone’, ‘The Wheel of Time’ and ‘The Irregulars’.  www.dneg.com