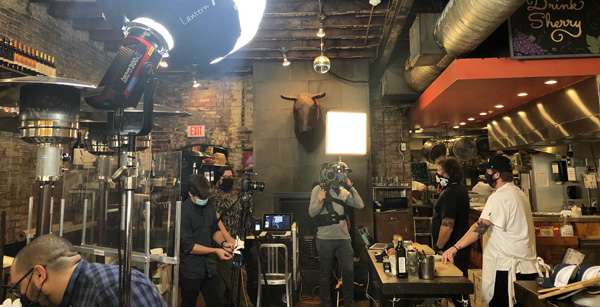 Bottle Tree Pictures in Boston cut down the size of its production crew by a large margin and successfully live streamed its recent production of a celebrity cooking fundraiser for Dana-Farber Cancer Institute.

The Jimmy Fund, a charity that holds community-based fundraising events to benefit Dana-Farber, and Bottle Tree were already preparing to shoot the program when the charity made a request at short notice to livestream the cooking lesson. Instead of attending in person, people could join from home, support the Institute and still comply with COVID-19 restrictions.

The shoot location was at celebrity chef Josh Elliott’s Toro restaurant, a well known spot in Boston. Normally, the production team would constitute three camera operators, a sound engineer, a creative director, a technical director working a switcher and graphics stream, a streaming engineer to handle the infrastructure and a third-party streaming company. But this time, considering the constraints of the small venue and social distancing, Bottle Tree Pictures needed to work within a much smaller footprint.

They managed the project with only three crew members and used a Dejero EnGo mobile transmitter for the livestream. “We don’t usually take on live productions and in the past, we've hired outside companies to handle the streaming. This can cost close to $20,000 and involve a team of people to get a signal online, but the restrictions and budget meant working out a new approach for this show,” said Dan Gruenpeter, executive producer at Bottle Tree Pictures. 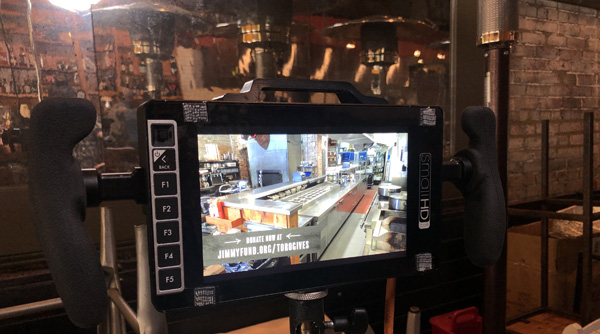 “Because we had worked with Dejero EnGo previously for TV news productions, we chose it again to solve the project’s streaming element. Having seen the multiple bonded cell connections available inside the Dejero EnGo gave us confidence that we could establish a reliable stream.” The EnGo mobile transmitter uses Dejero’s proprietary Smart Blending Technology, which intelligently combines multiple network connections in real-time to expand reliable coverage and increase bandwidth capacity.

The Bottle Tree Pictures team had only one hour to set up and capture the footage of the celebrity chef, who cooked three dishes to support the fundraiser before the restaurant returned to its regular customers. To work within those limitations, the Bottle Tree Pictures team built a complete switcher and streaming rig into a small cart that they could wheel in and out. Using the conventional workflow, the production would have taken a full day to set up, and cost several times more.

“The whole system worked without a hitch despite the fact that the show had not been rehearsed, which was a little scary. People watching live were able to ask questions about the Institute and interact in real-time which, from The Jimmy Fund’s point of view, was the whole point of the show,” said Alex Enman, creative director at Bottle Tree Pictures. “The program broke all fundraising goals the client had set and everybody wants to do it again.” 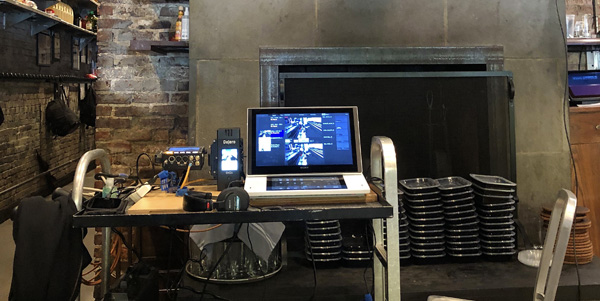 The Bottle Tree team built a complete switcher and streaming rig into a small cart.

The Jimmy Fund and Dana-Farber Cancer Institute chose Facebook as the live streaming platform for this event due to its built-in fundraising features, and the ability for the Jimmy Fund to host the stream and for the Toro restaurant’s page to mirror it.

Anther outcome is that from now on when taking on streaming projects, Bottle Tree will be much less inclined to park trucks, run lines or wait for satellite time slots. “With the Dejero EnGo, we can just turn on the device and we’re connected. It’s very portable and the 24/7 tech support is excellent.

“Instead of hiring engineers to manage a complex transmission chain that has multiple points of failure, we are in control, which opens a range of new possibilities for Bottle Tree Pictures. For example, we’re now exploring the idea of expanding the chef concept into a series with a number of other Boston and restaurants, and trying out the EnGo’s file transfer capabilities for our next commercial productions."   www.dejero.com