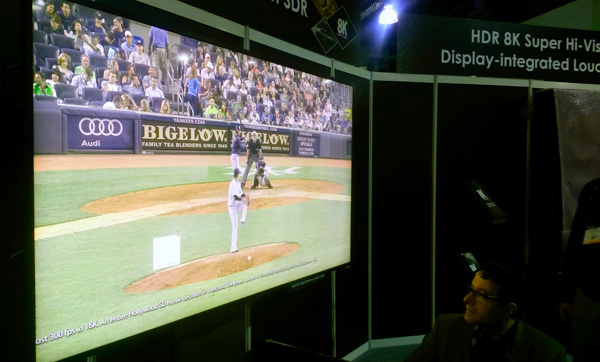 Cinegy has launched two applications based on its new NVIDIA GPU-accelerated video codec, Daniel2, into public beta. These applications are the Cinegy Player 3 and an Adobe Premier export plug-in, which can be used to create HD, UHD/4K or 8K output in the Daniel2 format. Daniel2 is an acquisition and production codec designed for recording from camera sources, editing and post-production as well as playout, and takes on the same role in the production workflow as AVID DNxHR, Apple ProRes or Sony XAVC.

An interesting update to the codec is the ability to apply 3D LUT-based colour profiles during real-time playback. In effect, this results in an initial professional-level colour grade, on the fly. Its purpose, according to Cinegy, is not to replace conventional grading software like Baselight or DaVinci Resolve but to give an immediate impression of how a video clip might look after post production.

The Daniel2-powered Cinegy Player 3 works as an ingest tool for live 8K recording as well, which was first demonstrated at IBC 2016. It enables 60fps 8K recording and simultaneous playback of one, or multiple 8K streams while performing realtime effects, colour correction, scaling and titling. Jog and shuttle, scrubbing, zoom and pan while playing at 60fps 8K or faster are also possible while still recording. This makes it useful for applications including instant replay for sports. Daniel2’s bitrates and peak signal-to-noise ratio are comparable to those of DNxHR or ProRes.

Over the past several months, Cinegy has been showing performance advantages of the codec in 8K recording and playback demonstrations. For example, at NAB 2017 in April, Cinegy showed a dual-core 13-inch MacBookPro connected via Thunderbolt3 to an external Akitio Node eGPU expansion chassis running on an NVIDIA GTX1080 graphics card, attached to a new Dell Ultrasharp UP3218K 8K monitor. This setup played 8K at 60fps - or at up to 180fps without vertical synchronization of fps to the monitor’s refresh rate. 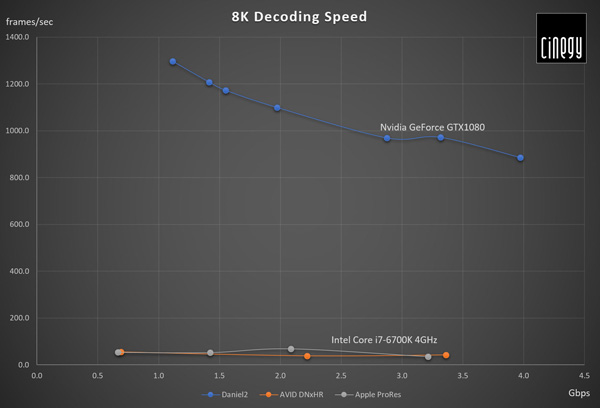 Cinegy also notes that the functionality shown in their demonstrations can be achieved on a Windows PC or notebook with a professional grade NVIDIA graphics card. An 8K monitor is not required. The Cinegy Player 3 can scale in and out as well as pan and zoom during playback, which means HD and UHD monitors can be used for 8K playback. On the other hand, if the attached screens support 10-bit colour fidelity, NVIDIA consumer grade cards may also be used.

Working on the GPU

Cinegy co-founder and CTO Jan Weigner described what he regards as the advantages and disadvantages of Daniel2 at this stage. “Cinegy’s Daniel2 GPU codec can decode up to 1100 fps at 8K, or 7680x4320 pixels, which is 16x the resolution of full HD. The output is over 17,000 full-HD frames decoded per second,” he said. “This performance relies on the fact that it was architected and developed from the ground up to be GPU based. All legacy dependencies and old codec architectures were discarded. Consequently, Daniel2 is only compatible to itself, but the benefits of this approach are enormous and outweigh the drawbacks by far.”

Jan also described the effect of using the codec in a post production studio. “A problem studios face when designing 4K, 8K or even 16K systems that need to handle and manipulate multiple streams in real time, is that even if you could decode the streams using the CPU, you probably still want to use the power of the GPU for effects and filters, which creates a system bus bottleneck to transfer the decoded streams into the GPU’s memory. However, Daniel2 streams media at a fraction of the size of its uncompressed counterparts. The streams are read from disk or via the network and passed to the GPU to be decompressed faster than uncompressed frames can be copied.

“So the Daniel2-enabled Cinegy Player 3 contributes to the post workflow in three ways - the system bus uses far less bandwidth, less space or bandwidth is consumed on disk or network, and the CPU is free to do other tasks as it no longer needs to decode multiple streams.”