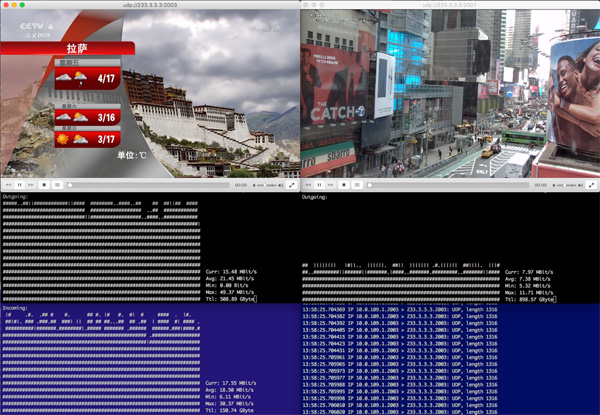 Consumers today are less tolerant of the limitations imposed by the use of linear satellite systems to transport video over long distances that broadcasters have traditionally used. For example, consumers like seeing live video, such as breaking news and live events, and video produced outside studios or away from places accessible to a broadcast crew. They enjoy interactivity and video that suits mobile screens and situations. Viewers prefer to watch whatever video they like on demand, whenever it suits them to watch it, resulting in long-tail marketing opportunities for video that is not profitable in a linear broadcast environment.

But satellite uplinks are expensive and time-consuming to establish, and therefore cannot be reliably made available to these on-demand or single-use access applications. Distributors attracted to the use of cloud computing for transcoding and distribution find that satellite transmission is difficult to integrate with a cloud environment. It is also based on a linear feed format which is at odds with quick, customized, file-based production

Adapting video delivery techniques for the Internet has not always resulted in reliable low-latency service or consistent, high quality – or both. Primarily mindful of broadcast quality, user experience, and the ability to guarantee live transmission rates over commodity Internet, Aspera has developed FASPStream transport as an alternative for Internet video transport in order to guarantee timely arrival of live video and data, independent of distance, network round-trip delay and packet loss that downgrade image quality and user experience, AND to achieve minimal startup delay, or pre-buffering.

Digital Media World spoke to Michelle Munson, Aspera’s CEO, and VP of marketing Richard Heitmann about these topics and others affecting video distributors who want to use commodity internet for delivery need to manage, and how Aspera has developed FASPStream to address them. It also considers some successful use cases with FASPStream, carried out by Broadway Video. 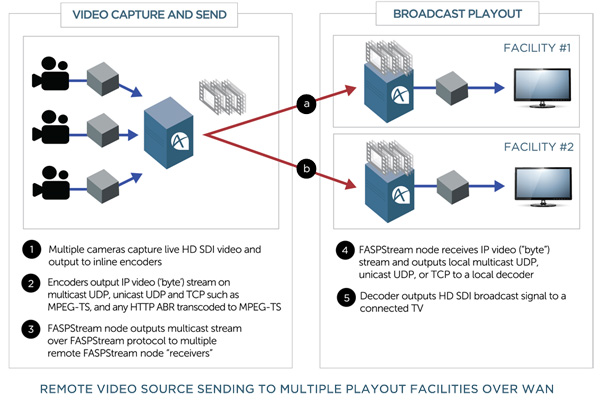 Specifically, Aspera has aimed to address shortcomings they observe in forward error correction (FEC) over UDP communications, and in peer-to-peer distribution, concerned that services using FEC have been unable to protect against packet loss without introducing noticeable delays. Peer to peer distribution, which is used by network infrastructures like CDNs, relies on determining routing paths or peer paths that are reliable enough to ensure quality. If content has to be transported for ingest in order to access these peer paths, or to be served from the edge, costs may increase.

Broadway Video, involved in digital video production, post, distribution and delivery services, was an early adopter of FASPStream both for contribution and distribution of live events. To validate their work with FASPStream to replace traditional transmission methods, and measure potential savings and efficiency, Broadway Video chose their Mecum Collector Car Auctions from two different locations, and the Ballet Royalty Gala from Cuba as use cases.

In the car auction tests, one in Indianapolis and the other in Portland, FASPStream was delivering the standard satellite transmission feed that would normally carry the show back to the broadcast centre, and then returned the stream back to the venue as a confidence feed to be viewed alongside the satellite confidence feed. In both trials, FASPStream performed as expected and with less delay than the satellite feed that was run in parallel. Configuration and setup of the FASPStream software took less than one hour from arrival at the venue to live.

The Ballet Royalty Gala in Havana included classes, rehearsals, interviews and a final performance streamed live worldwide. Similar events in the US normally require either a full satellite truck, which was not available, or a proprietary fibre circuit, which was too expensive. The team relied on the Wide Area Network conditions available locally, with limited bandwidth, high latency and packet loss, using FASPStream for delivery. 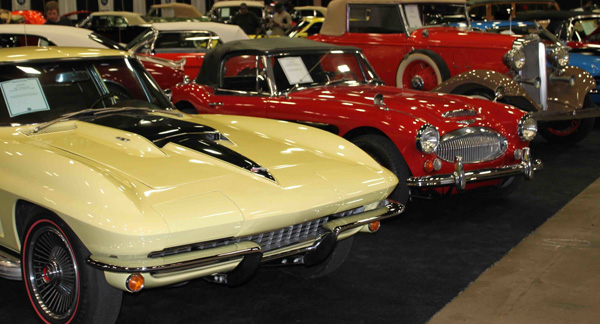 The configuration consisted of HD-SDI switched audio and video feeds connected to an MPEG4 encoder and encoded at 4.5Mbps. The IP multicast output of the encoder was then handled by the FASPStream software running on a micro server and transferred using the FASP protocol from Cuba to Utah, where it was pushed into a CDN for packaging and final distribution. Network latency was 175ms with packet loss as high as 12%, and network speeds from the theatre topped out at 8Mbps. Nevertheless, the set-up recreated a satellite-quality transmission live from Cuba using standard Internet connectivity.

Round-trip time, RTT, refers to the length of time it takes for a signal to be sent plus the length of time it takes for an acknowledgment of this signal to be received. This time delay therefore consists of the combined propagation times between the two points of a signal. For FASPStream, the round-trip delay time is less than 2 seconds for 50 Mbps video streams transported over commodity global Internet conditions, that is, 200 milliseconds round-trip latency and 3 percent packet loss.

As the distance / RTT between the two end points increases, the probability of packet loss increases. In response, TCP slows down its rate of transmission, effectively limiting the transfer speed. The sender either has to reduce the video quality with a lower bit rate, or wait until enough of the stream has arrived to start playing, causing buffering and glitches during playback.  FASP is distance independent, meaning the speed at which the data moves over the network is the same regardless of the distance or RTT between the end points, the size of the data being sent, or the conditions of the network. FASP will also completely utilize the available bandwidth to transfer at the maximum possible speed of the network.

CEO Michelle Munson said, “Average bitrate consumption among consumers is rising, but delivery bitrates among operators and distributors are not keeping up because they are still relying mainly on HTTP-based ABR delivery to compensate for low availability. ABR works by detecting the amount of bandwidth available, and adjusting the video bit rate down to match. But as it still relies on HTTP transport, which in turn relies on TCP, ABR is affected both by bandwidth availability and by latency and packet loss on the network. For streaming over longer Internet distances or less-than-ideal network connections, the HTTP stream reduces its transmission rate, ABR must reduce the bit rate, and a lower quality video and user experience results. 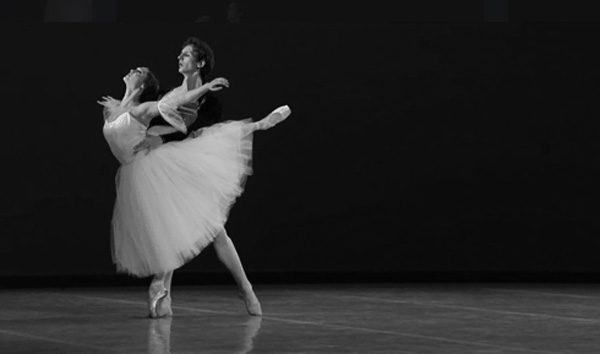 “ABR is also operationally more complex, requiring all video sources to be encoded into many bit rates with additional storage and encoding costs. Aspera FASPStream does not use special processing or encoding, and maintains a delivery rate at full bandwidth capacity, meaning that streams can be delivered at their original quality and transferred in their native format.”

Aspera wants users to be able to transmit and consume streaming video in an interactive, flexible, controllable way for different applications. A key differentiator for FASP is that, because it is capable of delivering at a consistent maximum rate over Internet regardless of distance from source to destination, new workflows that directly integrate files and streams become possible - with very predictable delivery.

“A live event captured via a camera, and streamed over the Internet to a player on a connected device or decoded back to baseband for broadcast playout, is a pretty straightforward example of stream-to-stream delivery. But in many workflows, concurrently capturing the live stream to a file is valuable,” Michelle said.

“An example of a stream-to-file application is a TV camera, DNA sequencer, MRI imaging machine or even a software system generating logs - in each case data is generated and captured, streamed over the Internet to a remote location, and written to disk for later viewing, additional processing and so on. Because FASPstream can transport the stream consistently at the generation rate, regardless of distance from source to destination, it can be written to file either on a standard file system or to cloud storage, supporting cloud-based processing workflows.

“An example of file-to-stream use is taking an existing video, reading it from disk, and then streaming it to a player – in other words, OTT delivery. FASPstream can handle the three scenarios natively – and also allows for many streams to be delivered concurrently in many-to-one and one-to-many scenarios.”

Regarding FEC, Michelle’s concern about its approach to reliability and parity protection is its reliance on redundant information. “FEC adds reliability to data transmission over best-effort IP networks by encoding data with redundant information as means of reconstructing the original data even if some of it fails to reach the receiver,” she said.  “Traditional FEC has needed a very large percentage of redundant data to protect against the packet loss rates of commodity Internet, making it inefficient.  Even the most efficient new error correction codes still involve so much pre-encoding time that live point-to-point delivery is delayed, and the reliability of the final delivery is still subject to network conditions.” 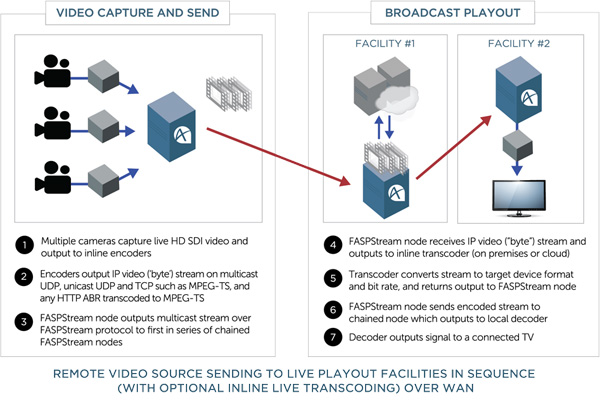 In short, if packet loss increases and the error protection is insufficient, the stream quality will suffer. Sidestepping these issues, the FASP protocol’s approach to reliability instead focuses on making sure that lost data is retransmitted at a statistically ideal rate. The bandwidth overhead due to redundant data is the minimum possible - many times less than FEC. Therefore, according to Aspera, the datagrams that make up the video frames in the stream can be ‘guaranteed’ to arrive in time for playback with negligible start up delay.

VP of marketing Richard Heitmann said, “Aspera FASP software for file transfers and streams performs infrastructure independent transport, and works equally well when moving data and streams to or from on-premises systems, and to or from cloud infrastructure. Running the software in cloud environments can be more scalable because the number of host computers and bandwidth are practically unlimited – handling any total throughput or any number of concurrent transfers/streams - and not subject to the fixed-capacity footprint of an on-premises data centre.”

Key functionality customers use for ‘scale out’ in Aspera’s cloud software-as-a-service is auto-scaling.  This is a management layer in the Aspera server that will automatically route client requests to lightly loaded server hosts based on current transfer load, and automatically spin up and down as many virtual machines as necessary to support a configured policy. Available for major public cloud environments like AWS, Softlayer, Azure and Google, it supports high capacity workflows for both stream and file transfers - 10 to 100 Gbps for thousands of concurrent transfers.  asperasoft.com