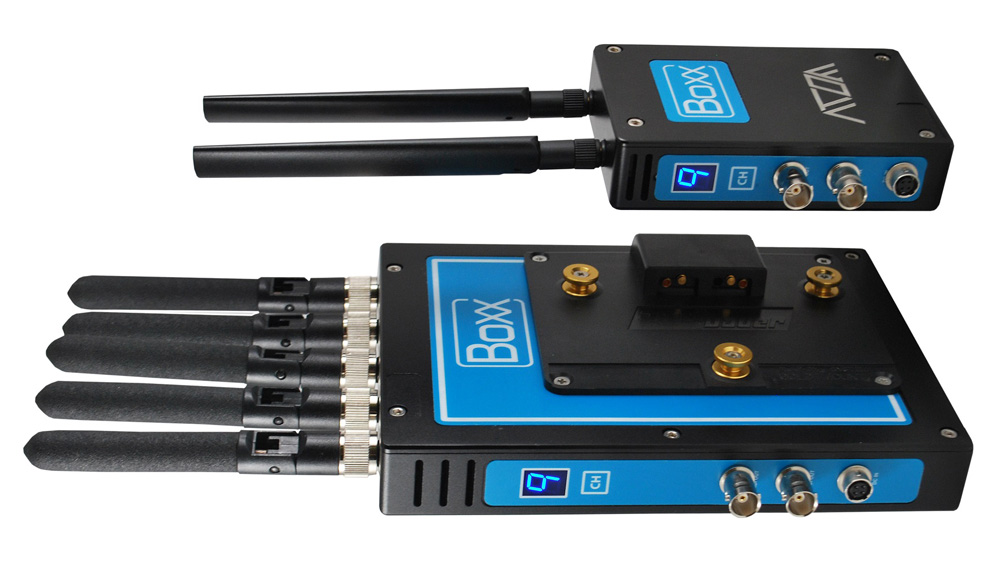 Boxx TV is celebrating ten years of developing wireless systems for professional cameras at NAB this year and will show the new Atom system, the most recent of their zero delay range, with a set of components creating a complete Video Assist system where wireless is a requirement.

The Atom is a small, powerful wireless system delivering HD video with zero delay over ranges of 600m or more, for live filming or productions where roving cameras work alongside cabled cameras.  At 111 x 71 x 25mm, it weighs 253g and supports HD-SDI and HDMI inputs. The Atom is designed to operate without pre-configuration, and with instant real-time channel selection.

To go with the Atom, Boxx TV has a range of components to configure a flexible, scalable Video Assist set-up with an unlimited number of receivers. In particular, Boxx is showing a dual channel director’s monitor, which will be new at NAB this year.

Boxx TV created its original zero delay HD product, the Meridian, as the first challenger to high cost RF camera systems. Meridian was soon in use on major productions such as the Emmy Awards, The Brit Awards, the Vancouver Winter Olympics, Australia’s Got Talent and Masterchef Australia, where it contributed to changing the way such programming was recorded by enabling shooting in spaces where it was not feasible or safe to run a cable. Meanwhile, Boxx TV’s long-range wireless product, Zenith, has been used on shows such as ‘Top Gear Festival’ and ‘Driving Wars’.

Today, the Meridian comes with functions and accessories such as camera control, Iris and Tally, and remains a standard for Steadicam, UAV or any kind of roving cameras used in broadcast, film and video setups.  In an increasingly congested licence-exempt spectrum, the Meridian becomes especially useful by using a much narrower channel bandwidth than many other available products, thereby increasing the robustness of the signal.

“When we launched our MPEG-2 transmitters at NAB ten years ago, licence-exempt transmitters were prohibitively expensive and half a second was considered low latency,” said Boxx TV CEO Darrell Bilton, “RF transmitters have become compact, easy to use and affordable devices that can be used with confidence for many applications where wireless is a must. My ambition has been to create a product that will allow people to adopt our system according to their immediate budget and requirements, and then to add components later as needs arise. In the Atom system, every component will work with every other component without pairing and with minimal configuration.”    www.boxx.tv